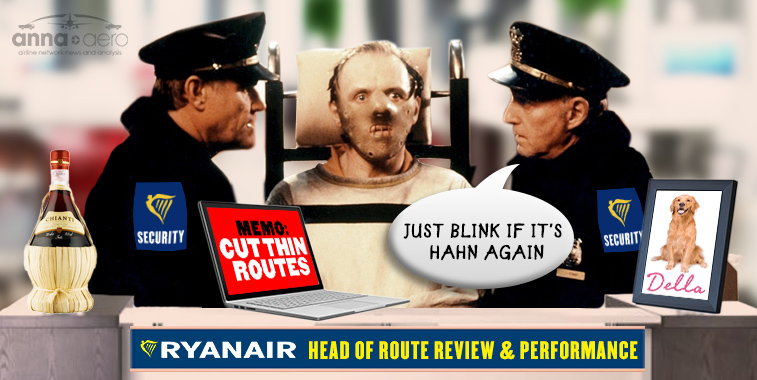 The new norm in airline planning: Ryanair’s strategy stands out for huge volumes of network development (year after year it has launched more routes than any other airline in the world) and shear speed, with decisions made to create and axe routes seemingly often taken in the space of a few weeks.

Using OAG data for the 10 years 2007-17, anna.aero can concisely reveal that during the last decade Ryanair has flown from 256 airports and operated over 2,800 routes. Of those, over 1,500 routes will be flown from 201 airports in 2017. This highlights just how many routes the airline has tried and dropped in the last decade, bearing in mind that a key component of the Ryanair strategy is ‘market-making’ – using its vast resources and capacity to simply ‘try out’ routes between different regional cities that previously no other airline would dream of, and for which market demand data is non-existent. (The effect of this ‘try out’ approach is slightly inflated in this analysis when Ryanair has temporarily redirected services during runway maintenance – at Milan Bergamo, Rome Ciampino and Warsaw Modlin – with services transferred to Milan Malpensa, Rome Fiumicino and Warsaw Chopin respectively).

London Stansted beats Dublin for most routes ever served

Despite being based in Ireland, Ryanair’s biggest base is not its home base in Dublin, but rather London Stansted. Since 2007, the ULCC has served over 180 destinations from London’s third-busiest airport, over 50 more than from any other airport. Of the 184 Stansted routes operated during the last decade, 73% are still operating in 2017 according to our analysis of OAG data.

Dublin ranks in second place – with Milan Bergamo not far behind. Rounding out the top five airports are Brussels Charleroi and Girona, the Spanish airport that was used as a Ryanair proxy for Barcelona for several years, before Ryanair finally started serving the main airport in 2010. Of the top 15 Ryanair airports, four are in Spain, three are in Italy, two each in Germany and the UK, leaving one each in Belgium, France, Ireland and Sweden. 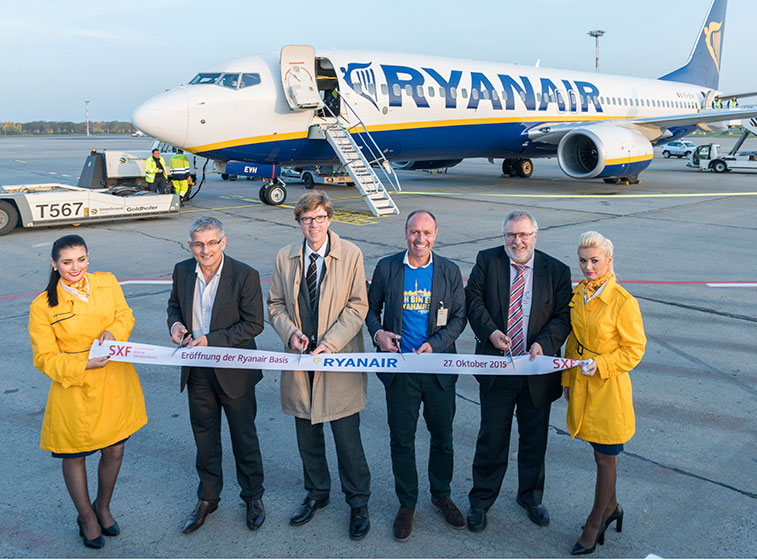 Heiliger Strohsack! (“Let’s hope they don’t come back in six weeks with a bigger pair of scissors.”) In fact Berlin Schönefeld is one of Ryanair’s most-intact bases with 47 of the 57 routes ever-operated from the German capital still being flown in 2017, an impressive 82% success rate.

Due to disputes with French authorities regarding interpretation of employment law, Ryanair has no year-round bases in France, despite serving 32 French airports in 2017. However, since 2007 it has operated 74 routes from Paris Beauvais located some 85 kilometres north of Paris, a top 15 Ryanair airport for routes, but never a Ryanair base. 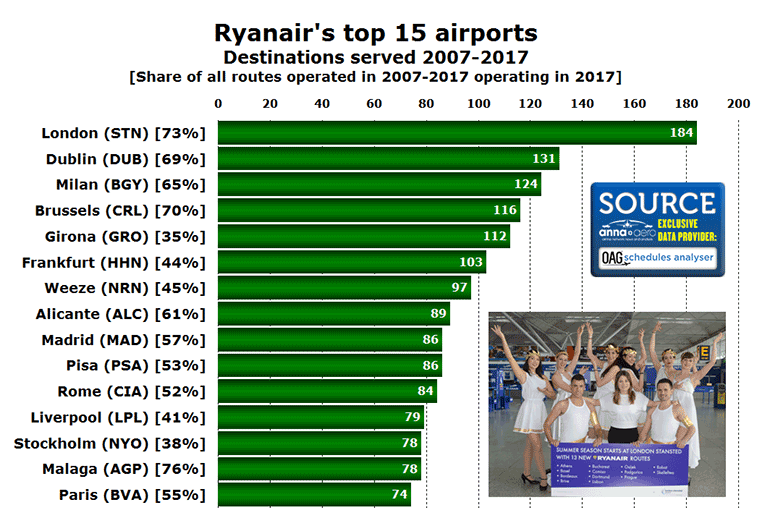 One statistic that has long fascinated anna.aero’s data elves is the amount of route churn/turnover at Ryanair’s different bases. Obviously, the longer a base has been operating the more likely it is that some routes will have ‘failed’ and been dropped, possibly replaced by other destinations. Similarly, the newer the base, the less likely it is that routes will have been dropped as the airline evaluates their performance and potential. To get our picture of churn, for each base we have taken the number of routes operating this year, and taken that as a percentage of the total number of routes operated by Ryanair at that base between 2007-17 – so the “best” bases are the ones with the highest percentage. We have also stipulated that a base must have operated at least 10 routes, which rules out of the analysis three bases; Frankfurt, Ponta Delgada (both with just four routes) and Timisoara (seven routes).

Six bases, all of which have opened since the beginning of 2014, have yet to see any routes dropped. Of the six, the airport with the most routes in 2017 is Sofia, with 21. All of the other airports serve between 13 and 20 destinations. (Another new base, Naples Airport, would also show a 100% record, but has been excluded from this analysis because it does not start until later this year.) 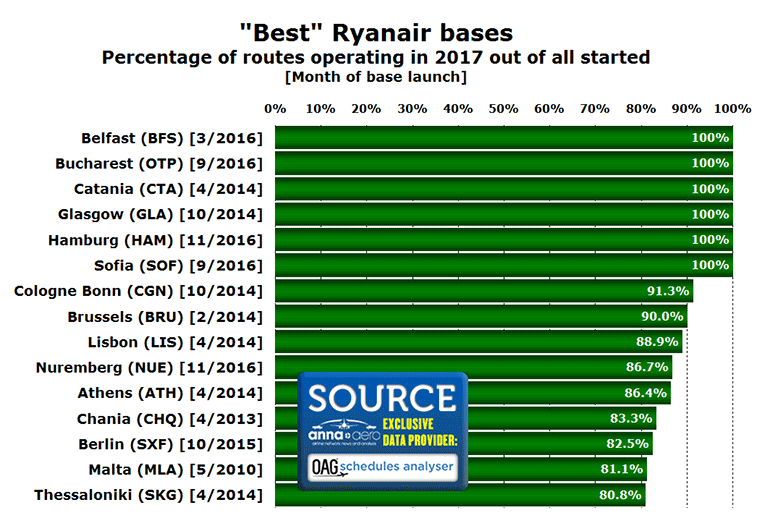 The oldest base among the top 15 in this ranking is Malta, which has been a Ryanair base for seven years this summer. Of the 53 routes flown since opening, 43 are still operating this summer. Although Berlin Schönefeld has not been a base for as long, 47 of the 57 routes ever-operated from the German capital airport are still being flown in 2017, an impressive 83% success rate.

At the other end of the scale are those bases that have seen the highest proportion of routes terminated. Topping this list is Alghero in Sardinia, which was actually dropped as a base in early 2016 before being reinstated later in the year. This year, Ryanair is operating to just nine destinations from Alghero out of a total of 45 that it has served since 2007. Of the 15 Ryanair bases with the highest route churn, all but one have been operating for at least seven years. The exception is Paphos in Cyprus, which opened as base #50 in April 2012. This year only 10 routes are being flown from the airport out of the 23 that Ryanair has ever operated, a ratio of 43.5% success. 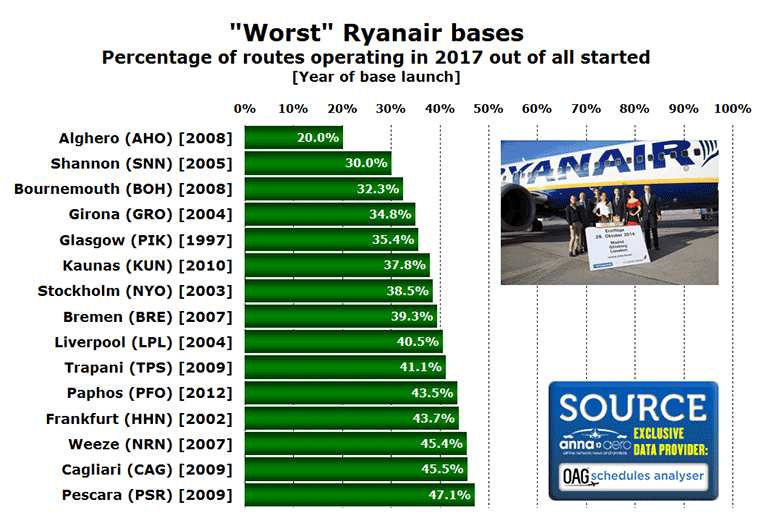 These 15 airports are spread across eight countries; four in Italy, three each in Germany and the UK, and one each in Cyprus, Ireland, Lithuania, Spain and Sweden. Despite the considerable level of route churn from bases in Italy, Germany and the UK, it should be noted just how successful the strategy has been. In 2016, according to OAG data, Ryanair is the leading airline in Italy accounting for 24% of seat capacity (Alitalia only has 22%), it ranked  #3 in the UK with 14.3% of seats (behind British Airways with 19.7% and easyJet with 16.8%), and #4 in Germany with 5.5% of seats (behind Lufthansa, airberlin and Eurowings).

Joint runners-up for prize of the airports with the shortest experience of Ryanair services are Rennes (which welcomed a seasonal service from Porto during the S14 season) and Rostock (which was served from Stockholm Skavsta for just three months during S08). Of the 24 airports experiencing only one route, seven were served from Ryanair’s biggest base at London Stansted, while three were served from Alicante, and two each from Athens, Girona, Milan Bergamo and Porto. The overall prize for the airport with the briefest experience of a Ryanair service goes to Alexandroupolis in Greece which welcomed just 10 flights from Frankfurt Hahn at the start of the S12 season. 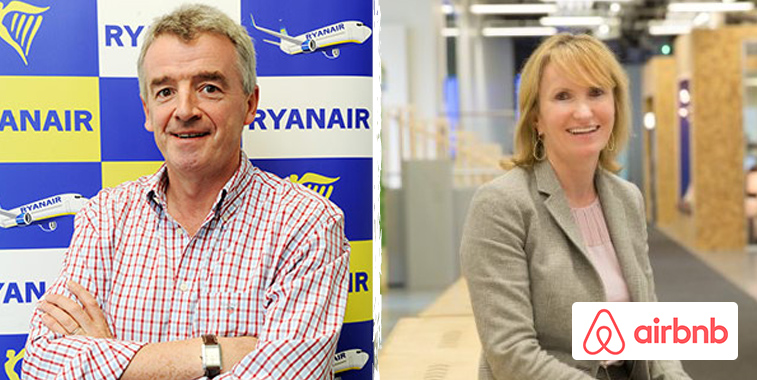 Ryanair is the Headline Partner of anna.aero’s sister event, Future Travel Experience Ancillary, which will take place in Dublin from 26-27 June. The show has been created to help airlines and their partners to develop new digital revenue streams at every step of the journey. Ryanair CEO, Michael O’Leary, will deliver the keynote address. The event will see the launch of a new technology-enabled, industry-led framework for commercial relationships encompassing airlines, airports, retailers, and major travel brands.

Attendees will have access to an exhibition of the latest products and services, social events in the heart of Dublin, and a ‘One-to-One Meeting System’, which has been designed to ensure everyone gets to meet the right people during the two-day event.

Airlines register to attend – for free!