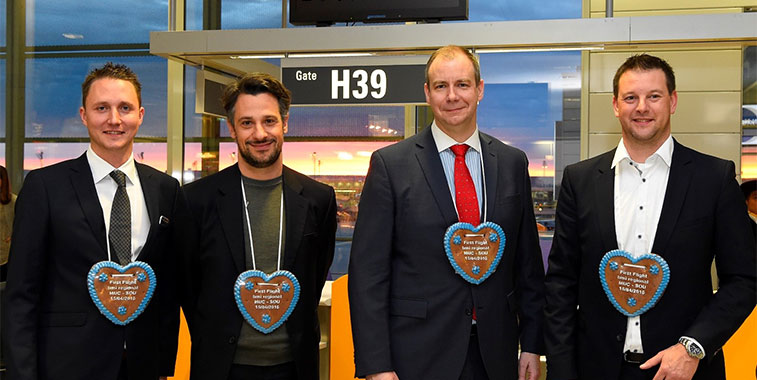 bmi regional started two new routes from Munich in April last year, linking the German hub to Southampton in the UK and Norrköping in Sweden. The UK regional carrier has slowed down the rate of its route churn since the last time we looked at the airline’s operations in March 2015.

bmi regional became a stand alone carrier in 2012, after the apron strings were finally cut by its short-term owner IAG. The UK-headquartered regional carrier is one of just a handful of airlines still flying regional jets in Europe (a list that includes French regional airlines HOP! and Fly KISS), with four ERJ 135s and 14 ERJ 145s in its current fleet. With a static fleet size since its inception in this latest incarnation of the bmi regional brand, unsurprisingly the carrier’s annual passengers have also remained reasonably stable since 2012.

In terms of the airline’s overall strategy and positioning in the market, like many other carriers, it is blurring the lines between the legacy and low-cost carrier (LCC) business models. During the writing of this article, anna.aero’s Editor received an e-mail from bmi regional saying that it was increasing the standard free baggage allowance to 23kg at no extra cost – a trait of legacy carriers. However, in the same marketing communication the regional carrier also conveyed its intention to allow passengers to pre-book their preferred seats (at a cost of £8 (€9.32) for a standard seat; £15 (€17.47) for an exit row seat) – a practice more akin to LCCs. 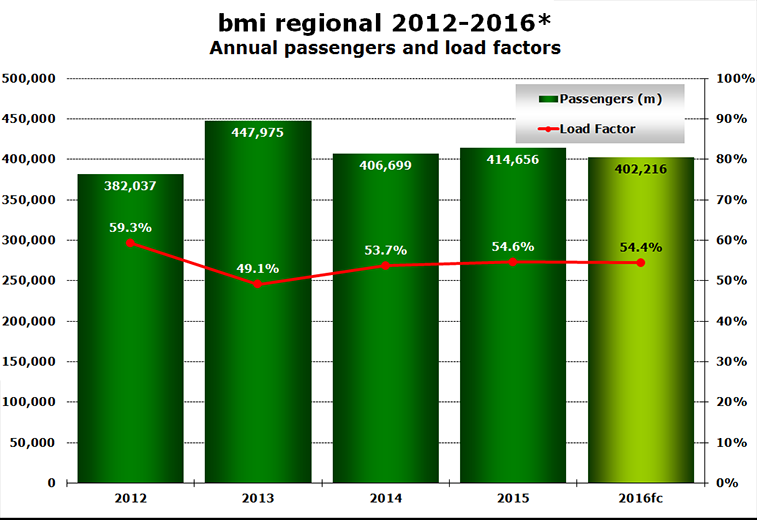 Last year’s figures are predicted to show a slight fall in passenger numbers, based on an anna.aero forecast using UK CAA statistics for the first 10 months of 2016. In this period, traffic is down 3% from around 360,000 in 2015 to 350,000 in 2016. Individual months show some significant swings in the number of passengers carried, with March 2016 down 26% year-on-year, while July’s results were 17% higher than the same month in 2015. Load factors (calculated as RSKs/ASKs) in 2016 have remained in a range between a low of 51.2% (February) and a high of 59.5% (June), giving an average of 54.4% for the 10 months of data available. It should be noted that for an airline predominantly chasing business traffic, the highest loads and monthly passenger figures were achieved in June and July, not the more traditional months of September and October.

Since we last reviewed bmi regional and its operations in March 2015, the rate of route churn at the regional airline has slowed down considerably. According to anna.aero’s analysis of the airline’s schedules for the last 30 months, it has operated or put on sale a total of 32 routes, of which 26 will be flown this summer (using data from w/c 8 August 2017). This includes the Birmingham to Gothenburg city pair which operated until March 2015, and is set for a comeback on 8 May this year after over a two-year hiatus.

In terms of the airline’s re-established Birmingham base, the service to Graz, Austria’s second largest city and bmi regional’s first destination in the country, will commence on 27 February, initially with a twice-weekly service (Mondays and Fridays), but then increasing to four times weekly in March. The route is primarily for the benefit of UK Midlands car manufacturer Jaguar Land Rover, which has a contract with Magna Steyr to produce vehicles at its factory in the Austrian city. The airline operates several routes like this for large corporations, including Toulouse–Bremen for Airbus. The Nuremberg (bmi regional’s seventh destination in Germany) and Gothenburg (fourth destination in Sweden) routes from Birmingham will launch on 8 May 2017, with six return flights per week each.

The importance of bmi regional’s network of services from Bristol (17% share of weekly seats) and Munich (16%) are well illustrated in the graph below, with eight of the carrier’s top 12 routes featuring either, or indeed both airports. New entrants to the top 12 over the past year have been the Southampton-Munich, Munich-Norrköping and Munich-Rostock sectors. 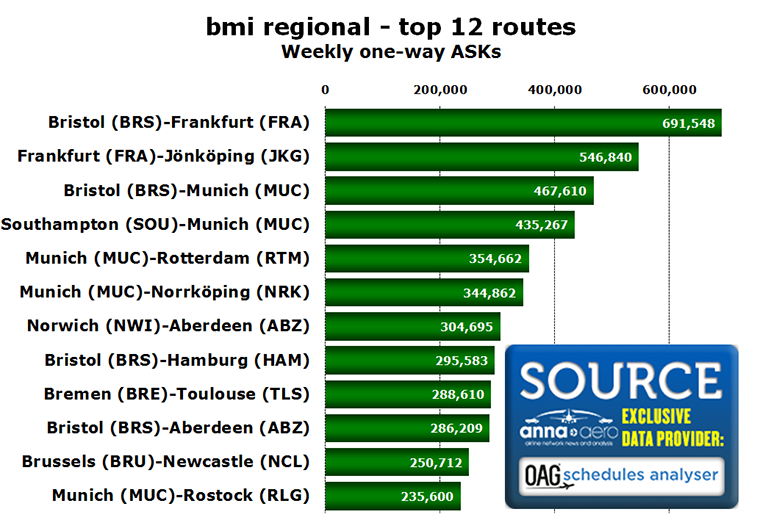 In terms of the fastest growing routes for weekly ASKs, Bristol to Hamburg has posted a double-digit increase of 13% since the same week in 2016, ahead of the 9.1% spike on the Frankfurt to Jönköping city pair. On the wrong side of the network planner’s capacity tweaks were Bristol to Munich (-25%), Norwich and Bristol to Aberdeen (both -16%). 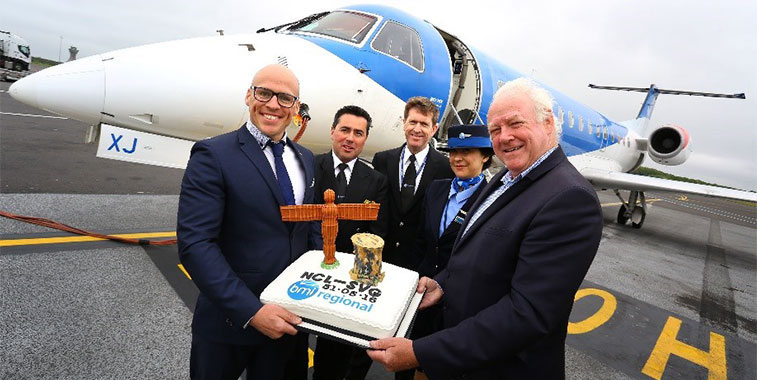 bmi regional started a new route between Newcastle and Stavanger on 31 May last year, becoming the airline’s second route at the time to Norway (the other being the Aberdeen to Oslo city pair). In 2016, anna.aero forecasts that the regional carrier will carry around 402,000 passengers at a load factor of 54.4%.