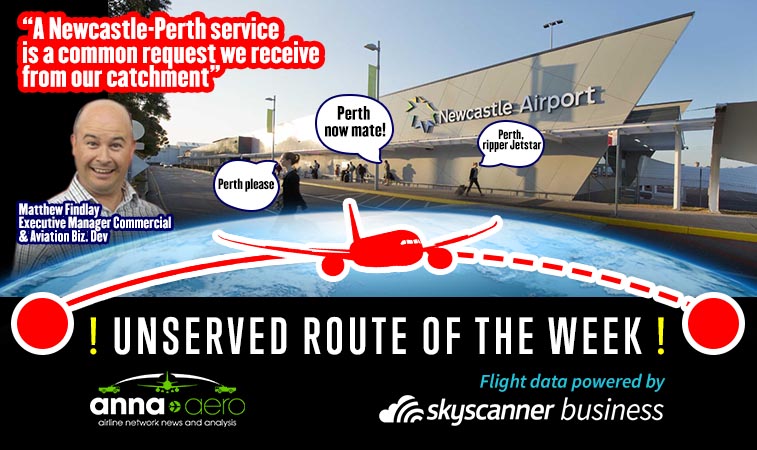 Strewth! Newcastle’s new €10m+ terminal extension is billed as “opening the possibility for new domestic routes such as Adelaide, Perth and Cairns, as well as international services to New Zealand as demand continues to grow.” Meanwhile the city is also getting another brand new passenger terminal – this time downtown – allowing Newcastle to become a home port for cruises.

With nearly 23,000 searches in the last year, a potential new route from Newcastle to Perth has been identified as this week’s “Skyscanner for Business-anna.aero Unserved Route of Week” – a powerful analysis based on aspirational data captured from the Skyscanner.net flight comparison site used by +60 million unique visitors per month. We have returned to Australia this week, the scene of our recent new route success: just before Christmas, Fiji Airways announced it would commence services between Nadi and Adelaide in June. This followed Ryanair’s decision to launch the Glasgow Prestwick to Brussels route, while Aer Lingus opted to begin Dublin to Miami flights in September – all previously unserved routes promoted by this column! Is the New South Wales airport next? “A Newcastle-Perth service is a common request we receive regularly from our growing catchment,” says Matthew Findlay, Executive Manager Commercial & Aviation Business Development, Newcastle Airport. “Online, we get requests almost daily. It’s up there with another popular request, Adelaide.” 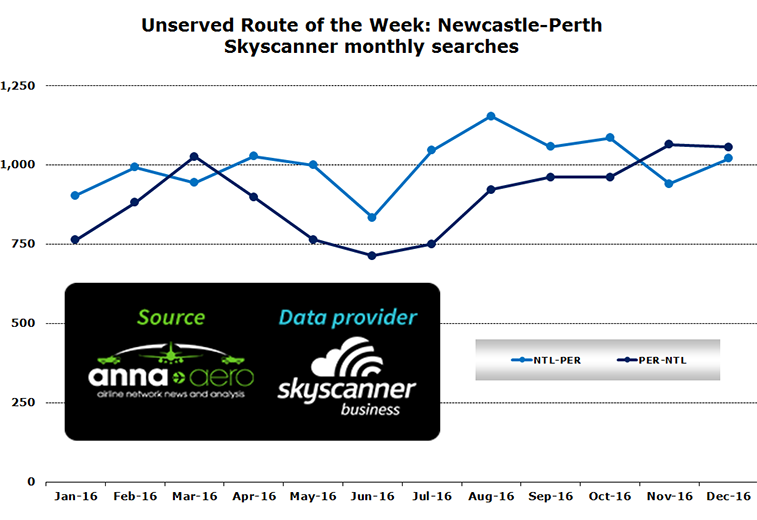 anna.aero wants Jetstar or Qantas to justify these flights

Skyscanner demand on this week’s unserved route shows a slight bias in favour of the Newcastle end of the city pair, a 53/47 split, so its existing carriers were therefore considered first. The airport is dominated by Jetstar Airways, controlling 51% of weekly seats, according to OAG data for the week commencing 30 January. At the moment, Qantas’ in-house LCC operates to just three domestic destinations from Newcastle – namely to Melbourne (22 times weekly), Brisbane (18 times weekly) and Gold Coast (10 times weekly). With Sydney being just 140 kilometres south-west of Newcastle, and this quick hop already being served by Australia regional carrier Pelican Airlines, means that Perth is the next largest Australian airport (after Sydney, Melbourne and Brisbane) without a direct Jetstar flight from the airport. That said, route economics may point to an Adelaide service being initiated from Newcastle first, as the sector length is less than half the distance (1,253 kilometres) than that of a potential Perth rotation (3,361 kilometres).

The second-largest carrier at Newcastle is Virgin Australia Airlines, with a 26% share of weekly capacity. Despite having a opportunity to pick-up an unserved airport pair like Newcastle-Perth, the airline competes with Jetstar on the trunk routes to Brisbane (served 20 times weekly) and Melbourne (daily) instead. “Being Australia’s largest regional economy, the greater Hunter Region has a long history in mining and that connection with West Australia underpins much of that demand,” suggests Findlay.

Contemplating the Western Australia end of the route, the potential carriers at Perth were considered next. Qantas is the largest airline at the airport with 36% of weekly seats, ahead of its nearest rival, Virgin Australia, with 24%. Of Qantas’ 17 routes from the state capital, the top three (in terms of weekly seats) are transcontinental, linking Perth with Adelaide (2,120 kilometres), Melbourne (2,706 kilometres) and Sydney (3,284 kilometres). In addition, it also flies lengthy sectors to Darwin (2,646 kilometres) and Canberra (3,091 kilometres), so a route to Newcastle should not be considered off the table for Qantas. Perhaps the biggest question for the group is which product best meets the needs of the potential market between Newcastle and Perth – full service or LCC?

When looking at the previous year of search data, the busiest month for potential traffic flows (for both directions on the route combined) is December 2016, with just over 2,000 searches, over 500 higher than the lowest monthly figure, which was recorded in June 2016 (1,500 searches). The seasonality profile of this search data is less extreme than the last Unserved Route of the Week (Reykjavik to Hong Kong) with the low-month traffic representing 75% of the highest month. According to OAG Traffic Analyser, because there is no direct service, the top three connecting options chosen by those passengers who did book travel between Newcastle and Perth in the past year indicates that the majority of connecting travellers use Melbourne (43%) Brisbane (38%) and Sydney (10%). These results are backed-up by Newcastle’s Findlay. “The ease with which people find using Newcastle rather than the busy, overcrowded Sydney hub, means that many passengers choose to fly [to Perth] via Brisbane or Melbourne.”

Indeed, an O&D that is not served by a non-stop flight will typically display a low purchase rate and low traffic. In this instance Skyscanner’s Travel Insight indicates a monthly average of 5.7% for the Newcastle to Perth route (see graph below). Therefore, if there was a Newcastle to Perth route, and if bookings performed in line with the “Skyscanner market average” for direct services at both airports (6.3%), the airline operating this route could immediately expect an improved purchase rate of 11%, without any increased marketing spend. However, with 23,000 annual searches a twice or three times weekly service should be immediately viable for the airline selecting to start this potential city pair. 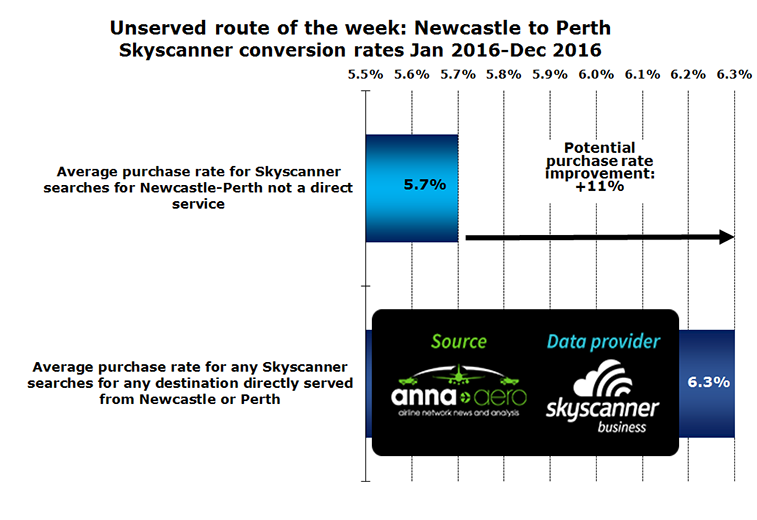