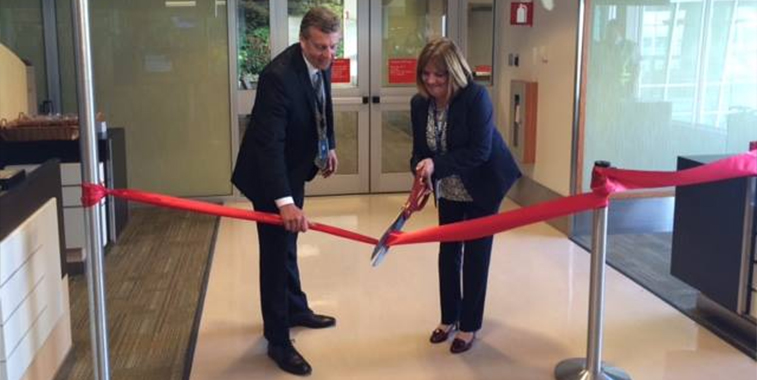 Geoff Dickson, President and CEO of the Victoria Airport Authority, and Patricia Moreland, Station Manager, Delta Air Lines, officially cut the ribbon to open the SkyTeam member’s new service to Seattle-Tacoma on 4 April last year. Delta last served Victoria in 2007 with a daily link from Salt Lake City. The other US airlines to serve the British Columbia airport are United Airlines, which links Victoria with San Francisco, and Alaska Airlines which also serves Seattle-Tacoma. These are the only US routes which are flown from Victoria.

Situated in British Columbia, Victoria sits around 80 kilometres to the south of Vancouver. The city lies at the southern tip of Vancouver Island off Canada’s Pacific coast, with it being split from Vancouver by the Strait of Georgia. The city is served by Victoria International Airport, which is located in the town of Sidney some 22 kilometres to the north of Victoria. The airport is very close to the US border, which lies about eight kilometres east of it out in the Haro Strait. Last year the airport welcomed nearly 1.86 million passengers. This figure is about 8.2% of the total throughput of Vancouver Airport in 2016.

In 2013 Victoria welcomed nearly 1.56 million passengers through its terminal. In 2016 it welcomed just under 1.86 million. This represents an increase in passenger throughput over the past three years of a little over 19%. During the past 12 months traffic has grown 8.5%, up from the 1.71 million passengers that travelled through the airport in 2015. 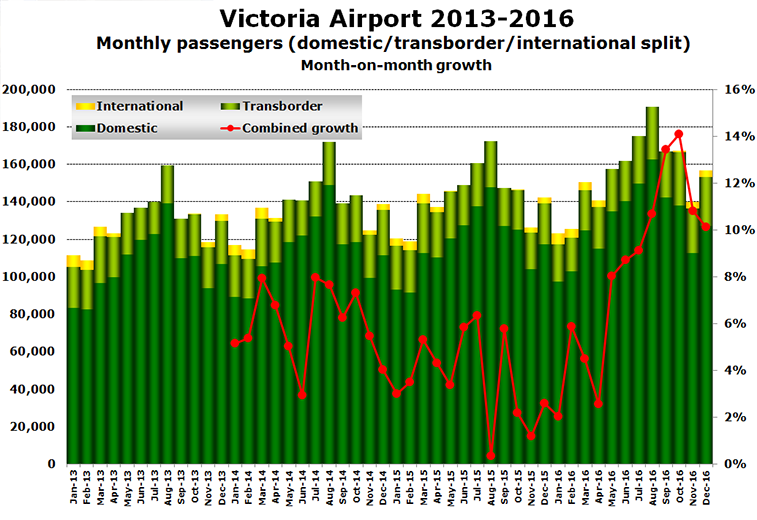 The leading market when it comes to growth over the past 12 months is the international one, which excludes the US, with traffic on the airport’s routes to Mexico (the only international market served) growing by 17%. However the market did drop in 2015 by 8.8% when compared to 2014. Overall the market has grown 6.8% in the past three years. This winter there are five weekly flights from Victoria to three destinations in Mexico. Air Transat and WestJet both offer weekly flights to Cancún and Puerto Vallarta, while Sunwing Airlines offers a weekly service to San Jose del Cabo.

In relation to the past three years, the market which has seen the biggest improvement is the domestic one. Overall it has seen traffic rise by over 21% since 2013. It is the only market during the past 36 months which has recorded only one month of traffic decline, with passengers down 0.6% in August 2015. When the three markets served from Victoria are combined, the airport has not registered a single month of traffic declines in the period analysed. When taking Victoria’s 2016 monthly passenger statistics and placing them into anna.aero’s Seasonal Variation in Demand calculator (SVID) it performs well, generating a score of 1.82 – an “Excellent” rating.

WestJet and Air Canada leading the way in Victoria

WestJet is Victoria’s leading airline, with it holding nearly 43% of seat capacity from the airport. In second place is Air Canada which occupies almost 36%. In total the market leaders at Victoria occupy just over 78% of all seats. However, the share of seats that these two carriers have compared with the rest of the airlines serving Victoria has dropped 2.7 percentage points since 2007. 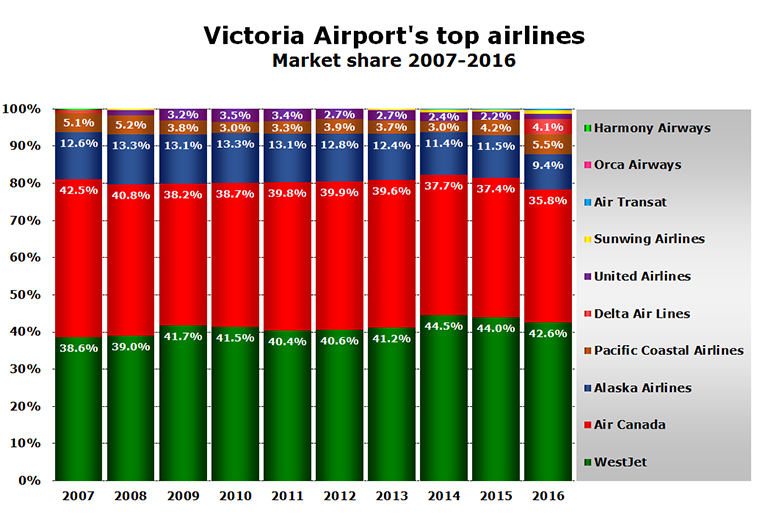 Last year was the leading year, in regards to the past decade for Victoria, when it comes to the amount of serving carriers, with the city last year seeing regular flights from nine airlines, up from seven in 2015. Returning to the airport in 2016 was Delta Air Lines, with it launching flights from Seattle-Tacoma. Delta last served Victoria in 2007 with a daily flight from Salt Lake City. That year Delta held 0.8% of seats from Victoria. Along with the return of Delta, another new carrier to Victoria in 2016 is Orca Airways. Commencing in October last year, the airline offers seasonal flights to Abbotsford and Tofino. Since 2007 only one airline has been lost from Victoria’s departure screens, with Harmony Airways, which operated a series of flights from Victoria to Honolulu, ceasing operations that year.

The largest route from Victoria is Vancouver, with it occupying 43% of weekly seat capacity from the airport this winter. The sector is flown by three airlines, with the leading carrier being Air Canada. The national carrier of Canada flies the link utilising its Air Canada Jazz brand, with it operating between the two airports with 111 weekly flights. Pacific Coastal Airlines (37 weekly flights) and WestJet (35 weekly flights) also serve, while Sunwing Airlines operates two weekly flights, with the aircraft stationing in from Vancouver to operate its routes to Mexico. After Vancouver, Calgary (22% of weekly seat capacity), Seattle-Tacoma (14%), Edmonton (6.2%), Kelowna (5.4%) and Toronto Pearson (4.2%) top the leading routes from Victoria. 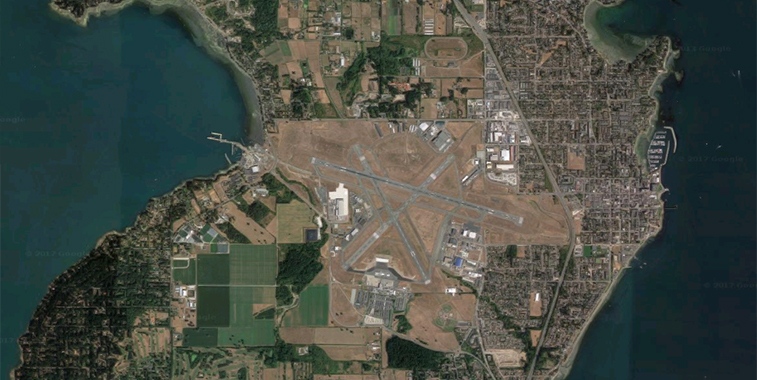 Victoria Airport is situated on the southern tip of Vancouver Island, some 22 kilometres to the north of Victoria. It is located in the small town of Sidney which can be seen just to the right of the airport. The water to the right of the airport is the Haro Strait. About eight kilometres into the straight you hit the US border. Last year Victoria welcomed nearly 1.86 million passengers, up 8.5% when compared to 2015.