SAS to establish bases in London and Spain in order to compete with the likes of Ryanair, Norwegian and easyJet 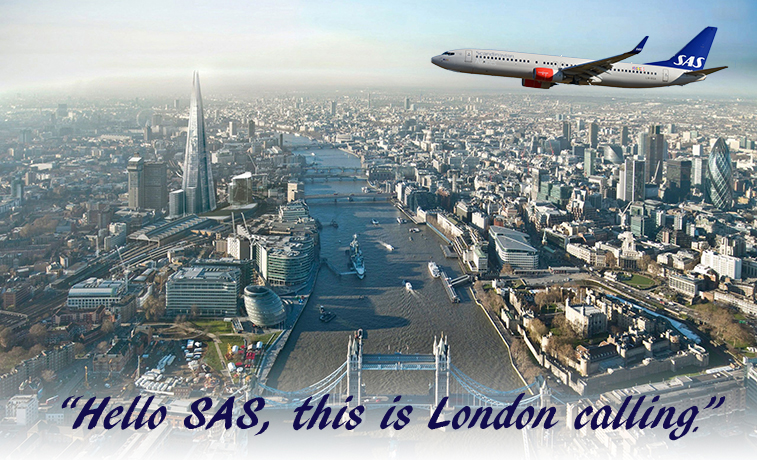 “Hello SAS, this is London Calling.” On 31 January it was announced that SAS had confirmed plans for new bases in London and Spain. Looking at the carrier’s current London schedules, it has three night-stopping aircraft at London Heathrow. However, if it wants to expand its London base in future years, it may be difficult for it to do so from an airport that is already at full capacity.

On 31 January, the board of directors at SAS agreed that the airline will open bases outside of Scandinavia, with London and Spain the agreed destinations. The carrier will also establish a company with its own operating license in Ireland. Operations are expected to begin in October, just in time for the start of the W17/18 season. The initiative behind SAS’ plan for these bases is to ensure a better competitiveness in the market. At first the bases will produce a small number of flights as a complement to SAS’ existing Scandinavian production. “In accordance with SAS’ strategy, the main focus will be on those customers who travel frequently to, from and within Scandinavia. SAS’ predominant production will continue to be based in Scandinavia in the years ahead. The establishment of new bases means that we can supplement our Scandinavian production and eventually build a wider network with a superior schedule for the benefit of our customers, “says Rickard Gustafson, CEO of SAS.

SAS is justifying its new strategy to ensure its long-term viability, and actively participate in the fight for customers in the growing leisure market. It says that it is necessary to have the same opportunities as other market participants including Norwegian, Ryanair and easyJet. Initially, the economic impact from the operations at the new bases will be small, but will gradually increase as the operations grow in size.

London Heathrow (highlighted in light green) is already one of the leading airports in the SAS network, with it currently being the airline’s seventh largest airport operation. Heathrow this winter sees 121 weekly flights with SAS, connecting Europe’s busiest airport to the cities of Copenhagen (39 weekly flights), Stockholm Arlanda (38), Oslo Gardermoen (32) and Stavanger (12). What makes Heathrow stand out is that it is the only airport in the top 12 that is not in Scandinavia. 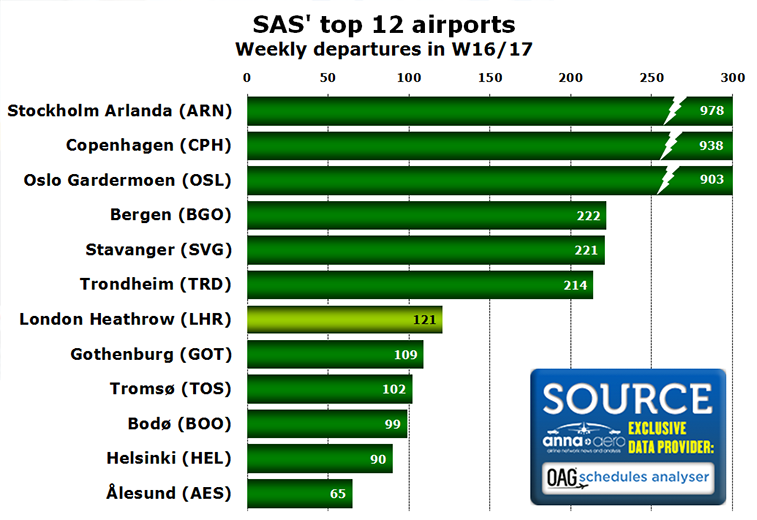 Looking at OAG schedules, SAS this winter already has three night-stopping aircraft at Heathrow, with the airline having departures to Copenhagen, Stockholm and Oslo before 07:05, while the airline’s first arrival into Heathrow is at 07:45. Although it has three night-stopping aircraft, anna.aero has ruled it out of being a hub for SAS due to the fact that the airline is wanting to expand its operations over time from its new bases, something that will be difficult from Heathrow (slot restricted) unless capacity is reduced on its links into the capitals of Norway, Denmark and Sweden.

SAS has already attempted to fly from London Stansted in recent times. On 26 October 2015 it moved its daily Heathrow – Gothenburg service to London’s third largest airport. However, it faced direct competition with Ryanair. The route only lasted five months, with flights ending on 29 February 2016. The route did not return to Heathrow. With wanting to base aircraft in London, and having ruled out Heathrow as a base for future requirements, anna.aero has taken a look to see how capacity is being used from the London airports of Gatwick, Stansted and Luton. Although London Southend is also a possibility, it is unlikely that SAS will choose this option due to its small operation and easyJet and Flybe having a base there. SAS has also not served the airport before. To get an understanding of winter utilisation, we analysed the morning traffic from the three London airports on 25 October 2016, the start of W16/17, and the time of year that SAS is planning to open its London base.

anna.aero can confirm that Luton and Gatwick are not the airports which will see a base from SAS, leaving just Stansted as the alternative to Heathrow. Taking slot availability into account, it would appear that Stansted is the best option for them to open a London hub. Disadvantages to Stansted are that it is Ryanair’s largest base and that Jet2.com is opening a base there six months before SAS’ proposed new one with seven aircraft, with forward bookings being ‘excellent’ according to the airline, resulting in more flights being operated than originally expected.

This winter SAS is operating 21 routes between its Scandinavian hubs and Spain. Its leading connection is the link between Copenhagen and Malaga. Although it is SAS’ leading route, it is only the second largest carrier to link the two airports. Norwegian, one of SAS’ main rivals, is the market leader with 39% of capacity. SAS sits second with 30%, while Ryanair (20%) and Vueling (10%) also compete on the route. 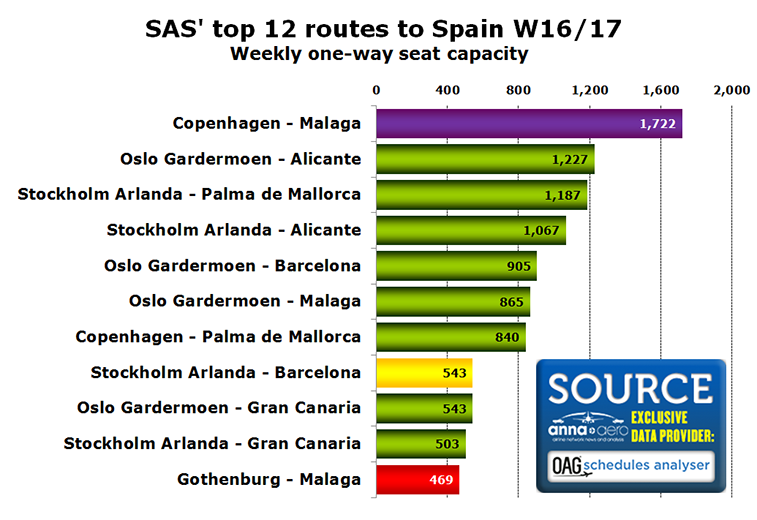 Malaga is the leading airport in Spain for SAS, with it occupying 37% of the airline’s weekly departing seat capacity from Spain this winter. Malaga is followed by Alicante (23% of weekly seat capacity), Palma de Mallorca (18%), Barcelona (13%) and Gran Canaria (9.1%).

As stated, SAS is looking to compete with the likes of Ryanair, easyJet and Norwegian in the growing leisure market. Now these three carriers already have bases in Barcelona and Palma de Mallorca, while Ryanair and Norwegian also have bases in Alicante, Malaga and Gran Canaria. Coincidentally these are the only Spanish airports which SAS operates into during the winter (highlighted in blue). In W16/17 all five of these airports have seen double-digit growth from Ryanair, easyJet and Norwegian over the past 12 months when we combine the three leading LCCs of Europe’s seat capacity together. Barcelona has seen seat availability rise by nearly 16%, with Malaga up by over 29%, Alicante 17%, Palma de Mallorca 63% and Gran Canaria 27%. 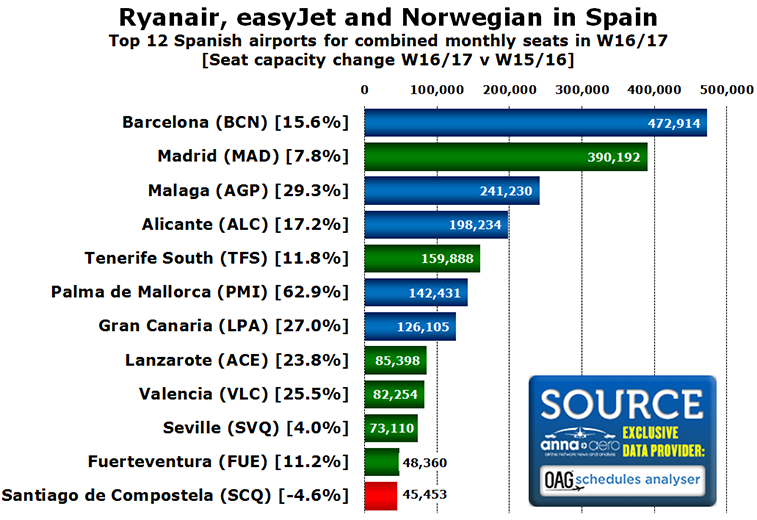 Barcelona is already a heavily competitive market, especially when the likes of Norwegian, Ryanair and Vueling are expanding fast from the airport. With talk of IAG establishing a low-cost long-haul airline from Barcelona, also planned for the end of 2017, it may be a very low-yielding market with so much competition. With Barcelona ruled out, unless SAS likes its chances, then anna.aero believes that SAS will launch its first Spanish bases in Alicante, Malaga and Palma de Mallorca. Although Gran Canaria is still a possibility for a base, it is currently the airline’s smallest airport operation in Spain, and the smallest of the airports when it comes to passenger traffic (12 million in 2016), therefore it is likely to be overlooked when compared to the markets of the chosen three.

At first, SAS’ based operations in Spain will most likely be used to serve current destinations, allowing aircraft to be freed up from existing bases in Scandinavia to launch other services. As stated by the airline, at first the bases will produce a small number of flights as a complement to SAS’ existing Scandinavian production. With this in mind, looking at potential destinations that they could serve from Spain, we have looked at the top 12 destinations for Ryanair, easyJet and Norwegian from the southern Europe nation, the main carriers that SAS is planning to target. Of the top 12, three airports spring to mind – Stansted, Manchester and Dublin (highlighted in blue). Of the top 12 airports, Manchester and Dublin are currently served by SAS, while Stansted, which we have picked as the most likely London base, is the second largest market from Spain, while Gatwick, also in London, is the largest. Although SAS also operates into Barcelona and Palma de Mallorca, the carrier has stated that it is after the leisure market, so anna.aero believes that destinations in North Europe are more likely to be launched. 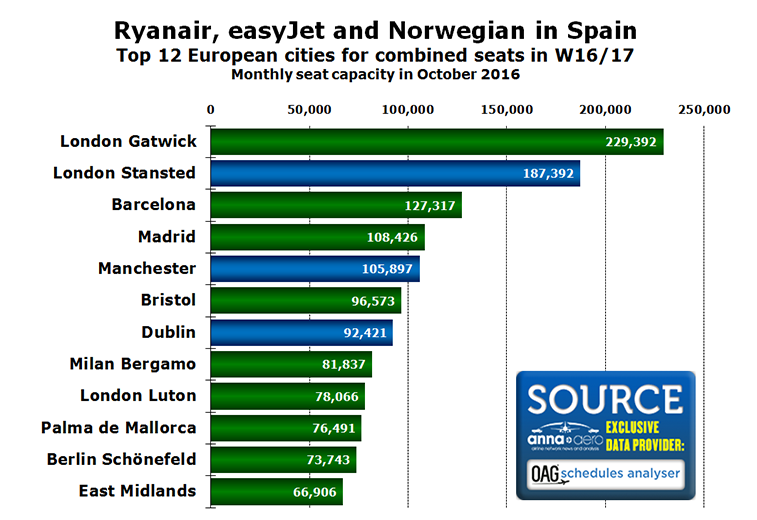 Needless to say there are many other markets that SAS could choose to enter with its new operations in Spain. Along with the three mentioned above, Birmingham, Milan Malpensa, Rome Fiumicino, Brussels and Edinburgh make it into the top 25 destinations from Spain for the three largest LCCs in Europe, with all of them currently being served by SAS from its Scandinavian hubs. 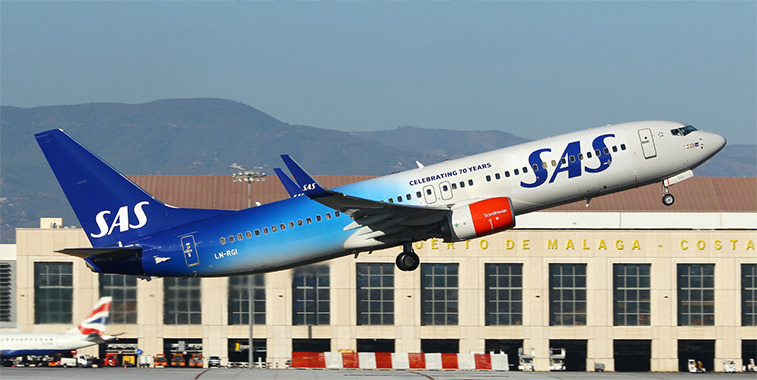 Could Malaga be SAS’ first Spanish base? As SAS’ largest airport operation in Spain, Malaga is being tipped by anna.aero to be one of the first non-Scandinavian bases to be launched by the airline. Strong contenders for routes to be served include London Stansted, Manchester and Dublin.