Seat capacity to Jamaica grows by 3.3% in 2016; capacity at Kingston and Montego Bay down 6.3% when compared to a decade ago 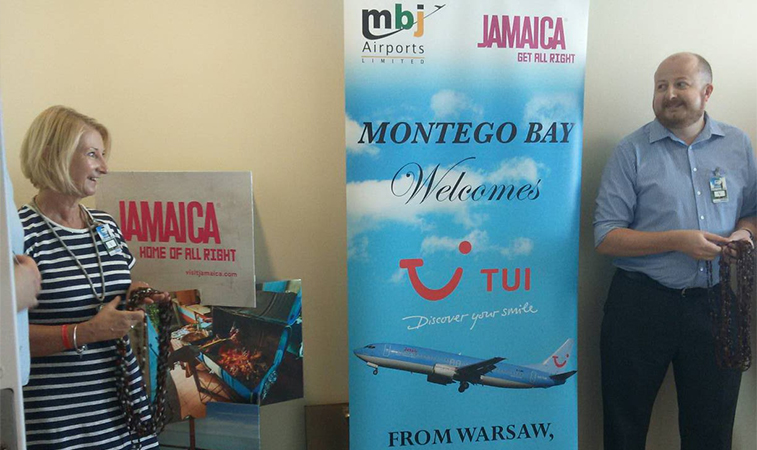 TUIfly launched weekly charter flights between Warsaw Chopin and Montego Bay on 3 November 2016. Although the charter service does not appear in OAG schedules, the carrier’s scheduled twice-weekly operation from Brussels to Montego Bay, that operates via Santo Domingo in the Dominican Repubic, has seen its weekly seats cut by 7%, a result of the service switching from a 787-8 to a 767-300.

Nestled in the Caribbean, Jamaica is the third largest island in the region and is home to around 2.9 million inhabitants. Ahead of it in size are Cuba and Hispaniola, the island of Haiti and the Dominican Republic. Jamaica is served by two main international airports, namely Sangster International Airport in Montego Bay, and Norman Manley International Airport which serves the capital, Kingston. There is also a second airport in Kingston – Tinson Pen Aerodrome – which serves mainly private traffic and a few domestic services, while a further airport is located in Boscobel, Ian Fleming International Airport. However, no airlines currently serve this facility, named after the author of the James Bond books. 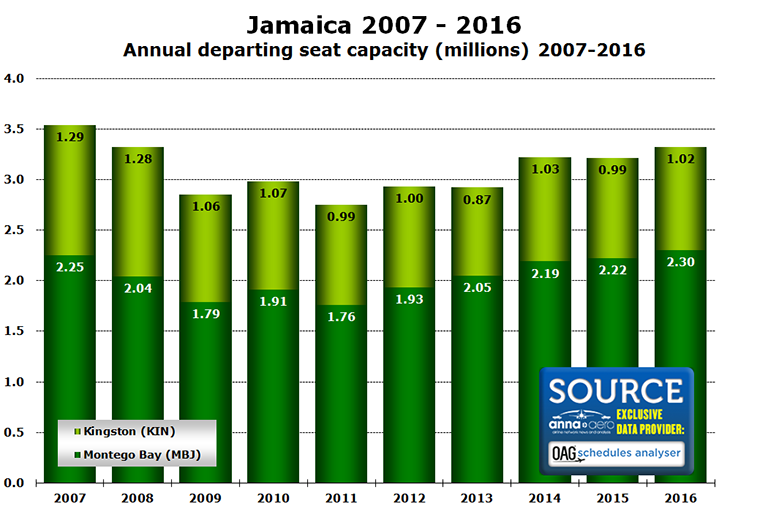 The best performing of the two airports in Jamaica is Montego Bay, with it seeing an average year-on-year increase in capacity of 0.5%. During the past 12 months, its seat offering has grown by 3.5%. The airport’s best year for growth was 2012, a year which saw seat capacity rise by 9.8%. Kingston has not performed as well during the past decade, with it witnessing an average year-on-year decline of 2.5%. However, it has gained capacity during the past 12 months, with seat availability up 2.9% when compared to 2015. The only other years when Kingston has recorded growth during the past 10 are 2014 (up 19%), 2012 (1.5%) and 2010 (0.7%).

US carriers lead the way

American Airlines is the leading carrier in Jamaica, with it occupying nearly 20% of weekly seat capacity from the island this winter. American links Miami to Kingston, while the Floridan airport, along with Boston, Philadelphia, Charlotte Douglas, Chicago O’Hare, Dallas/Fort Worth and Los Angeles are connected to Montego Bay. Overall US carriers make up 54% of departing seats this winter, down one point from 55% in W15/16. 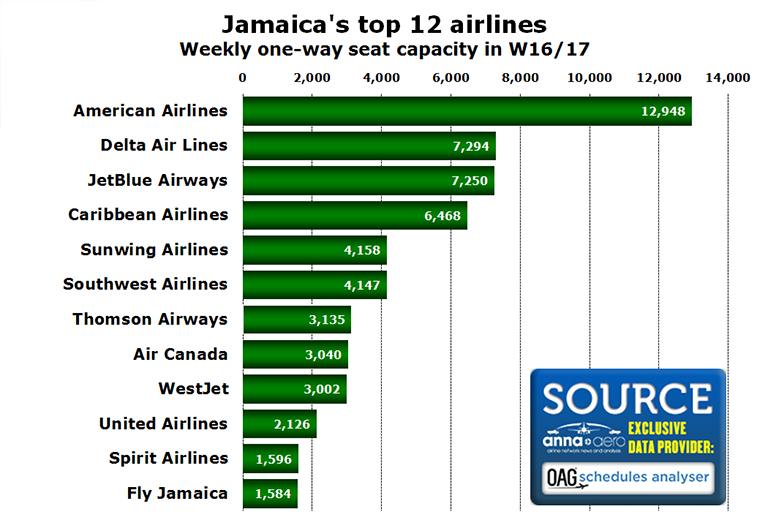 Sunwing Airlines is the best performing carrier in the top 12, with it increasing its weekly seat capacity to Jamaica over the past year by 22%. Delta Air Lines has climbed from fourth to second largest carrier during the past year, a result of it increasing its seat offering by 2%, whereas JetBlue Airways (weekly seat capacity down 2%) and Caribbean Airlines (-13%) have cut theirs. Outside of the top 12 a further five airlines have cut capacity to Jamaica, with Air Transat (13th largest airline; weekly seats down 24%), British Airways (17th; 22%), Copa Airlines (19th; 14%), Condor (20th; 2%) and Jetairfly (22nd; 7.0%) all down.

Sangster International Airport serves Montego Bay, and is the largest airport in Jamaica. Last year it saw seat capacity rise by 3.5%, while its share of seat capacity in Jamaica grew from 64% to 69% during the past 12 months.