His Excellency Mr Akbar Al Baker, Group Chief Executive Officer of Qatar Airways, was presented with the anna.aero “Platinum Planet Prize” for opening the world’s longest non-stop commercial air service between Doha and Auckland on 6 February. He was given the award on arrival at Auckland Airport by anna.aero’s Assistant Editor Jonathan Ford.

6 February, Auckland: As he stepped off the plane in Auckland anna.aero presented Qatar Airways Group Chief Executive Officer, HE Mr Akbar Al Baker, with the “anna.aero Platinum Planet Prize” for opening the world’s longest non-stop commercial air service (14,535 kilometres according to OAG Analyser). The new daily Doha-Auckland service takes the record away from Emirates’ Dubai-Auckland route, which is 342 kilometres shorter according to OAG Schedules Analyser data.

Paul Hogan, Publisher of anna.aero, said of the airline’s win: “The award of the anna.aero Platinum Planet Prize, in association with our data partner OAG, gives distinction to Qatar Airways for its wave of pioneering route development. While ever-longer airline routes advance the cause of making the world even more connected, this prize also salutes the enterprise, entrepreneurship and marketing genius which goes into making these routes viable, lasting, and able to make a sustained contribution to the economies they serve.”

anna.aero’s “Platinum Planet Prize” longest route methodology is the measurement between world cities calculated on a straight line geographical basis using OAG Analyser. Air India’s Delhi to San Francisco service stakes a claim for being the “world’s longest non-stop route” for its 15,300 kilometre Delhi to San Francisco service. However, this is only because, for operational reasons in September 2016, Air India changed the route from an Atlantic/Polar direction to a much longer, less-direct distance over the Pacific. According to OAG analyser data, the distance between Delhi and San Francisco is 12,376 kilometres, based on the shortest transatlantic routing; 2,150 kilometres shorter than the new Qatar Airways Auckland service! 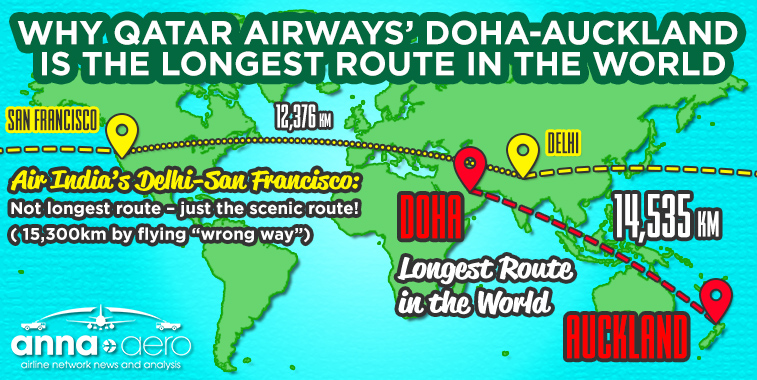 Air India’s Delhi to San Francisco service is not the “world’s longest non-stop route” – just the longest way of getting somewhere: Last September Air India changed the flight from an Atlantic/Polar direction to a less-direct routing over the Pacific for operational reasons.

On the inaugural flight to NZ with Qatar Airways

On Sunday 5 February anna.aero joined Qatar Airways as it launched flights between Doha and Auckland. The 14,535 kilometres sector is also the longest in terms of flying time – over 17 hours. anna.aero’s roving reporter, Jonathan Ford, joined Qatar Airways to celebrate the launch. In order to get to Doha, he flew on flight QR8 from London Heathrow on 4 February. Then he caught the inaugural flight to Auckland, the airline’s first destination in New Zealand.

Auckland becomes Qatar Airways’ fifth destination in Australasia. It first served the market in 2009 when it launched flights to Melbourne on 6 December that year. Melbourne was then followed by Perth (launched 3 July 2012), Sydney (1 March 2016) and Adelaide (2 May 2016). Its new route to New Zealand’s largest city will be flown daily on its 777-200LR fleet. 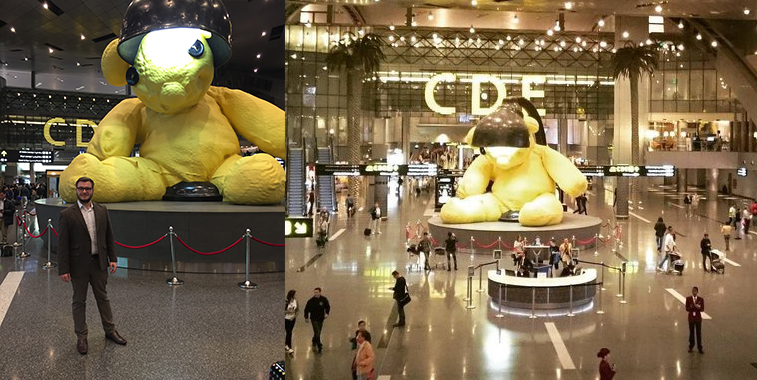 Touchdown in Doha. In order for Ford to get to Doha for the inaugural flight to Auckland, he flew from London Heathrow on QR8, one of many daily flights between the UK capital airport and Qatar Airways’ hub, on 4 February. When transiting through Doha, one of the most iconic sights is the gigantic teddy bear. Called Lamp Bear, designed by Swiss artist Urs Fischer, it takes centre stage in the grand foyer leading to Doha’s world-class duty free hall. It is a 23-foot canary yellow teddy bear sculpted from bronze, that sits peacefully inside a lamp. It’s a playful piece that humanises the space around it and reminds travellers of childhood or precious objects from home. It is estimated to be worth $6.8 million (USD). Time for boarding. QR920 would be departing from gate C1 at Doha, the nearest gate to the airline’s business and first class lounges. Boarding commenced at exactly 04:00, with passengers receiving a small selection of gifts (a Qatar Airways-branded battery charger and New Zealand key ring) plus an inaugural flight certificate. Once seated in 7K, the placement for Ford on the 16-hour-plus inaugural flight to Auckland, he was then presented by the crew with a cupcake which was highlighting the link between Doha and New Zealand’s largest city. Along with a cupcake, a kiwi smoothie was also offered. The onboard menus were also specialised for flight QR920 on 5 February, with many New Zealand wines on offer for those seated in business class. 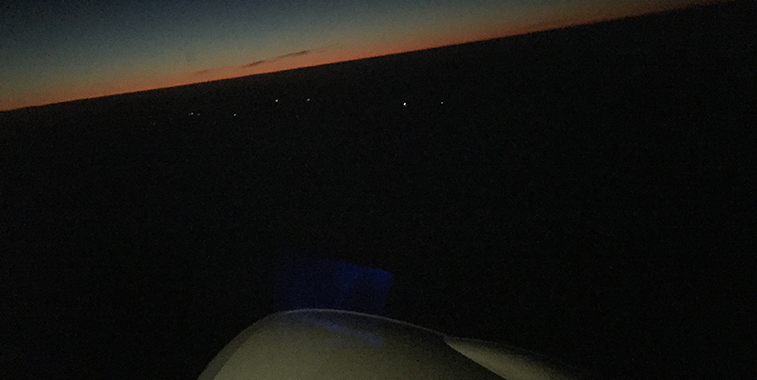 Flight QR920 took off at 05:25 from Doha’s northern runway on 5 February. Once airborne, the 777-200LR took a sharp turn right out over the Persian Sea, and headed south-east towards the UAE. Once the turn after take-off was completed, the sun rose, the first of two sunrises that passengers will experience on Qatar Airways flights to Auckland. Time to change into something more comfortable! Having not slept on the flight between Heathrow and Doha, or getting much rest in Qatar Airways’ business lounge (so much to do!), Ford decided that the first course of action was to get some rest. One advantage of business class on Qatar Airways is that they give passengers complementary pyjamas and slippers to wear on the flight. So once changed, Ford toasted the start of Qatar Airways’ new venture and then got a couple of hours sleep. Having watched up to four films at around halfway through the flight, and eaten endless amounts of food, Ford decided it was time to do something different and be active. What he decided to do was a circuit of exercises to help pass the time. These included press ups, lunges and stretches, along with a perplexed look from one or two passengers who witnessed the events… 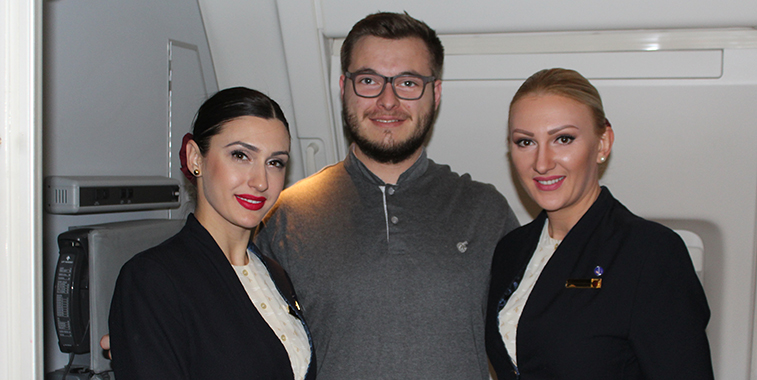 Not only did Ford do exercise to pass the time on the flight, but he also spoke with the crew in the galley to help pass a few moments. Here he is pictured with crew members Aneta Malinova and Maja Vicanovic. After being in the air for nearly 16 hours, the captain came over the tannoy speaker to say that we had begun our descent into Auckland. During the descent, passengers were able to make out Mount Taranaki which sits close to New Plymouth. Due to its resemblance to Mount Fuji, Taranaki provided the backdrop for the movie The Last Samurai starring Tom Cruise. 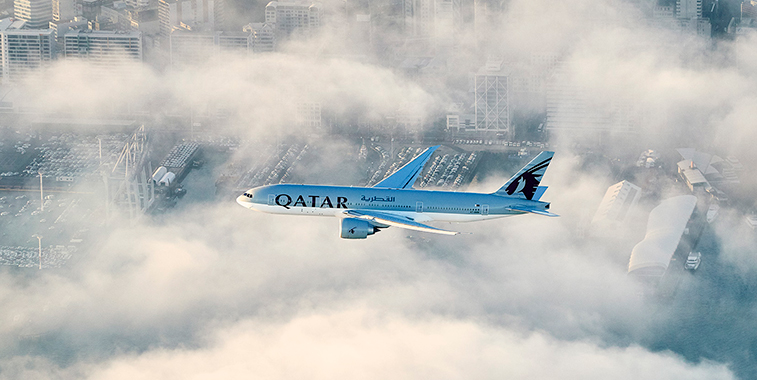 Qatar Airways flight 920 made an unusual approach into Auckland on the day of its inauguration. The airline had arranged for the aircraft to do a flyover of the city’s harbour, but unfortunately the clouds were out on 6 February. However, some of the key features of Auckland’s harbour are still visible. Once the flyover was completed, the flight made its final approach to Auckland Airport. Flight QR920 touched down in Auckland at 07:15, around 15 minutes ahead of schedule. Once the aircraft had cleared the runway and taxied to the gate, it received a splendid fire truck water arch salute from Auckland’s firefighters. 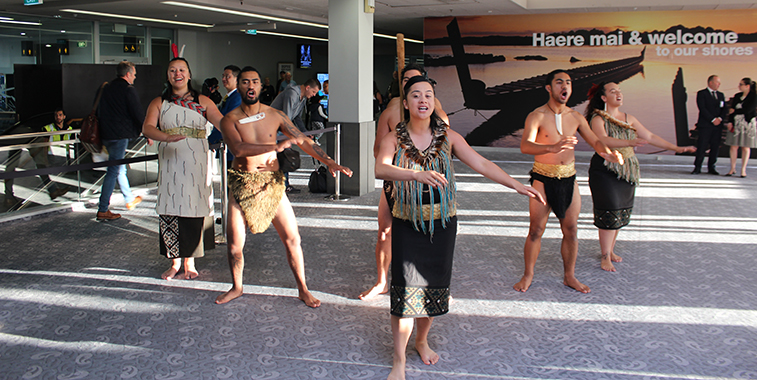 Once the aircraft had pulled onto stand, passengers disembarked. Once off the aircraft, they were treated to a traditional Maori welcome as they proceeded towards immigration. 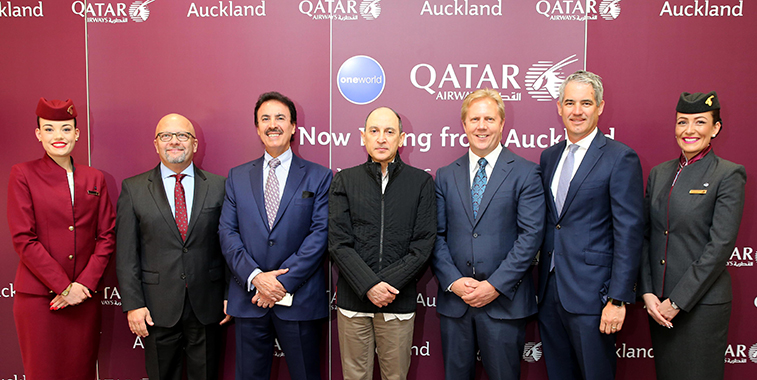