Larnaca-Madrid is “Skyscanner Unserved Route of the Week” with 120,000 annual searches; will it be easyJet orange or Cobalt blue to serve? 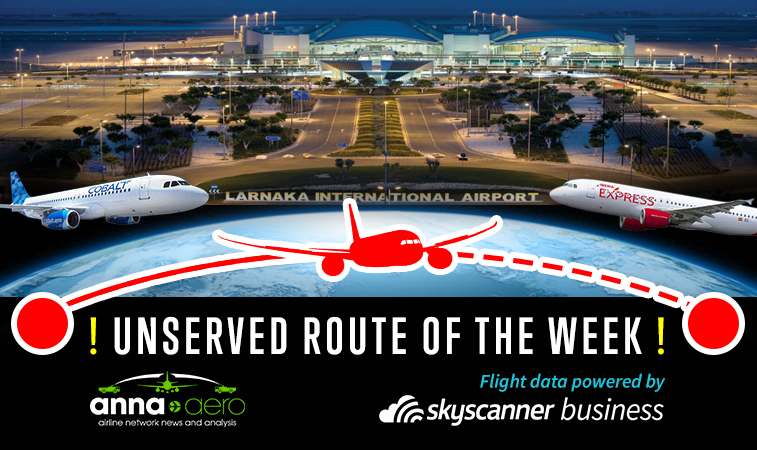 Larnaca to Madrid? “Are you kidding!?” do we hear you say? This is what looking at Skyscanner search demand is all about. If 120,000 travellers are looking for Larnaca-Madrid on Skyscanner, just imagine what the true demand is when combined with other sources – airline booking engines etc. Could be double that!

With over 117,000 searches in the last year, a potential new route from Larnaca to Madrid has been identified as this week’s “Skyscanner for Business-anna.aero Unserved Route of Week” – a powerful analysis based on aspirational data captured from the Skyscanner.net flight comparison site used by +60 million unique visitors per month. “The Larnaca to Madrid route is definitely a viable potential sector with real inbound and outbound demand,” states Maria Kouroupi, Senior Manager Marketing & Communications at Hermes Airports, which operates Larnaca Airport. 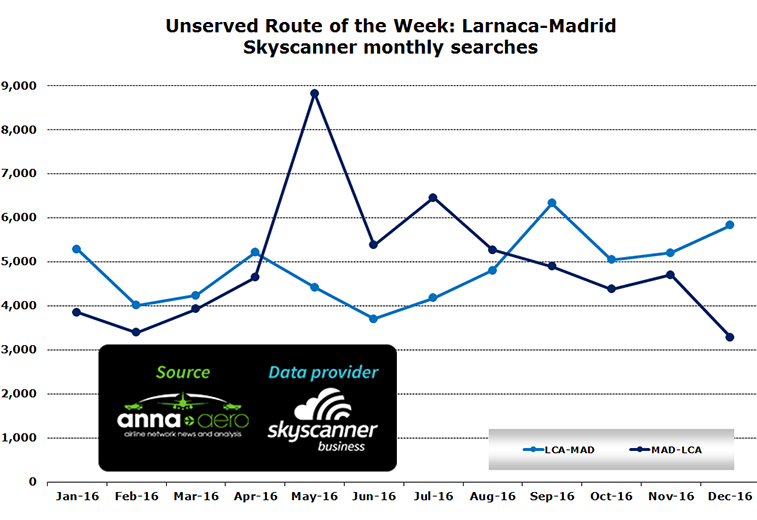 anna.aero wants Aegean or Cobalt to add these flights

Skyscanner demand on this week’s unserved route shows an almost exact 50/50 split. We looked at demand at the Cypriot end of the potential route first. Larnaca is dominated by Aegean Airlines, controlling 19% of weekly seats at the airport, according to OAG data for the week commencing 7 February. At the moment, the Greek carrier operates to just five international destinations from Larnaca – namely to Athens (34 times weekly), London Heathrow (daily), Thessaloniki (daily), Tel Aviv (five times weekly) and Paris CDG (three times weekly). While the number of points served by the airline more than doubles to 11 routes in the peak season, the additional services are almost all to Greece and another regional operation to Beirut. Aegean flies to no Spanish destinations at all from Larnaca, however it does offer Barcelona and Madrid on a year-round basis from its Athens base, so a link from Cyprus should not be written-off as completely unlikely.

The second-largest carrier at Larnaca is newcomer Cobalt, already with an 11% share of weekly capacity. However the airline is presently concentrating its network on points in France (Paris CDG), Greece (Athens, Thessaloniki, Heraklion and Chania) and the UK (London Stansted, Manchester and Birmingham). Looking ahead to Cobalt’s plans for S17, Spain does not feature here either, as its new routes will be to Tel Aviv (26 March) and Brussels (27 March). anna.aero also featured the carrier in a recent Leak of the Week story, where we revealed that the airline was seeking to add Cardiff, Glasgow and Newcastle to its S17 route portfolio. So clearly robust network growth is part of Cobalt’s short-term aspirations, only time will tell whether that includes Spain – perhaps this Skyscanner search data will help the airline make a decision on this exciting market opportunity. Larnaca’s Kouroupi has some other ideas on which airlines are best suited to operate this potential service. “A number of carriers like Iberia Express, Norwegian or easyJet could serve this route.”

Considering the Spanish end of the route, the potential carriers at Madrid were contemplated next. Unsurprisingly, Iberia is the largest airline at the airport, with 43% of weekly seats, ahead of its nearest rival, Air Europa, with 15%. Neither carrier currently has a big presence in the region, with Iberia only offering three times weekly services between Madrid and Athens between the two rivals combined. Iberia’s frequencies to the Greek capital are expanded to double-daily in the summer, along with seasonal operations to Heraklion and Santorini. Even in the peak summer months, Air Europa does not stray into this part of the Mediterranean. Behind the big two at Madrid there is a clutch of LCCs, lead by Ryanair (11% share), and followed by easyJet (3.3% share) and Norwegian (2.5% share), with the latter two having already been identified as potential targets to fly this city pair by Kouroupi. On this basis, she must clearly feel that any sort of service is more likely to originate in Spain rather than Cyprus.

When looking at the previous year of search data, the busiest month for potential traffic flows (for both directions on the route combined) is May 2016, with over 13,200 searches, nearly 6,000 higher than the lowest monthly figure, which was recorded in February 2016 (7,400 searches). The seasonality profile of this search data is more extreme than the last Unserved Route of the Week (Newcastle to Perth) with the low-month traffic representing 56% of the highest month. According to OAG Traffic Analyser, because there is no direct service, the top three connecting options chosen by those passengers who did book travel between Larnaca and Madrid in the past year indicates that the majority of connecting travellers use Athens (42%) Bucharest (18%) and Tel Aviv (14%). In total 22 different airports were used as transfer points by those travellers who did fly between Larnaca and Madrid.

With a lack of direct services, travellers between these two cities have clearly got used to one-stop alternatives – as suggested above. That said, the market demand is extremely buoyant – as the graph below shows, with 5.1% of the Skyscanner searches for these indirect Larnaca to Madrid services converted into ticket sales – that’s more than the average 4.8% achieved for Skyscanner conversion/purchase rates for all direct routes available from either Larnaca or Madrid. However, with nearly 120,000 annual searches a four or five times weekly service should be immediately viable for the airline selecting to start this potential city pair. “Madrid is considered to be a popular destination for Cypriots in terms of business traffic. At the same time, Cyprus’ broad history and culture, as well as its diversified nature, could be considered as a major attraction for Spanish travellers that could support the route on a year-round basis,” concludes Kouroupi. 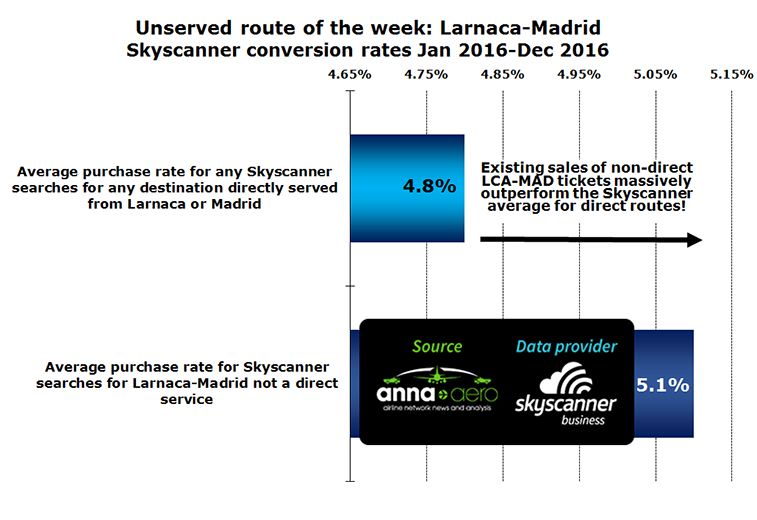