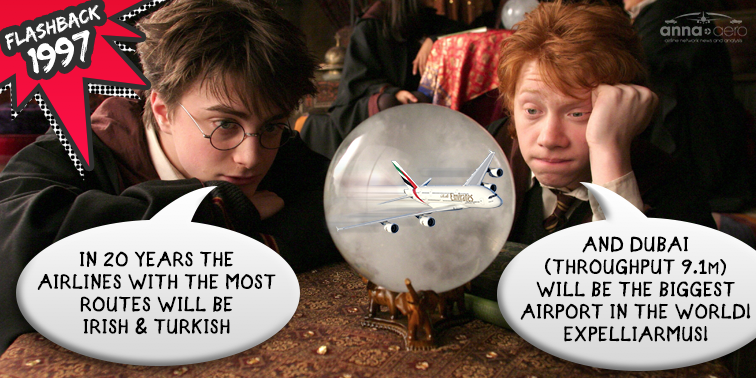 The zillion-dollar Harry Potter phenomenon seemly appeared from nowhere in 1997. Equally, 20 years ago, what brave analyst would have predicted the future world dominance of a cheeky Irish airline (now with 1,500 routes), an old-fashioned Turkish national carrier (now serving 117 countries, 29 more than nearest rivals), and a UAE breakaway airline which has allowed Dubai to capture Heathrow’s crown of “world’s busiest international airport”?

With the start of the S17 season rapidly approaching (at the end of March), most airlines should have sorted out the majority of their schedules by now. So this week anna.aero takes a closer look at what OAG schedule data for S17 (from the end of March to the end of October) tells us about the world’s airlines and their route networks. For many airlines, especially in the northern hemisphere, this is the key period for making profits as many airlines operate at a loss during the winter season when demand, especially for leisure flights is much lower.

Ryanair leads US carriers for most routes in S17

No surprise here as Ryanair leads the way with almost 1,500 routes operating during the S17 season. This is over 150 more routes than it served in S16, extending the ULCC’s lead over the USB3 (US Big 3) carriers; American Airlines, Delta Air Lines and United Airlines. US carriers (shown in bright green) also account for two other positions in the top 15, with Southwest Airlines ranking sixth and Allegiant Air in 13th place. China’s three largest airlines (shown in red) also make it into the top 15, led by China Southern Airlines with almost 580 routes. Four European (U)LCCs make the rankings with Ryanair joined by easyJet, Wizz Air and Vueling. Norwegian and Jet2.com were both just outside the top 15 in 17th and 19th positions respectively. The remaining carriers in the top 15 are two Star Alliance flag carriers (Air Canada and Turkish Airlines) and Thomson Airways, the UK-based leisure airline, part of TUI Airlines which in turn is part of the TUI Group. 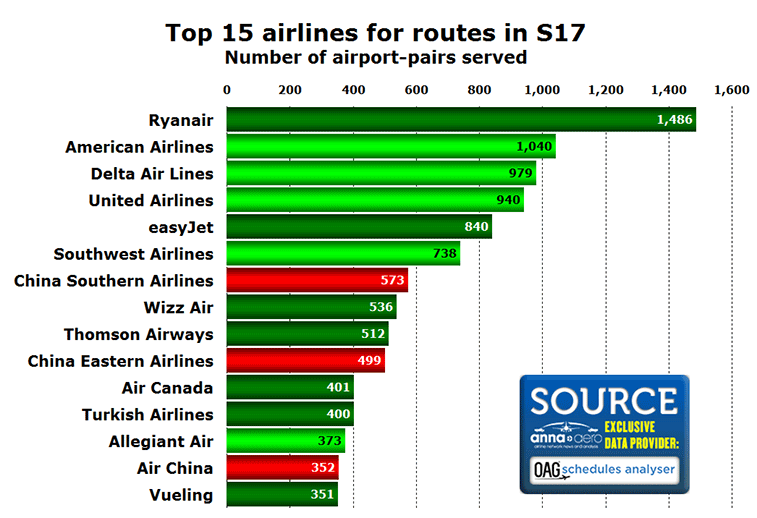 Two of Europe’s biggest flag-carriers, Lufthansa and British Airways, ranked 16th and 18th, while TUIfly Belgium (previously known as Jetairfly until the end of last October) takes the final position in the top 20. According to OAG data there are 652 airlines worldwide offering scheduled services on at least one route this summer.

Despite recent challenges, Turkish Airlines continues to add new destinations and country markets to its Istanbul-based network, most recently Conakry in Guinea. This summer the Star Alliance carrier will be present in 117 countries, 29 more than its nearest rivals SkyTeam’s Air France (with 88 countries) and oneworld’s British Airways (with 83 countries). The leading non-European carriers using this metric are both MEB3 carriers (shown in orange), Emirates and Qatar Airways, who both coincidentally currently serve 77 countries with scheduled passenger flights. The USB3 carriers (shown in bright green) all make the top 15, although Delta with 67 country markets ranks one place behind Ethiopian Airlines with 68 country markets. The inclusion of Air Canada and Austrian Airlines means that six Star Alliance carriers appear in the top 15 compared with four from SkyTeam and three from oneworld. The two currently unaligned carriers are Emirates and Etihad Airways. 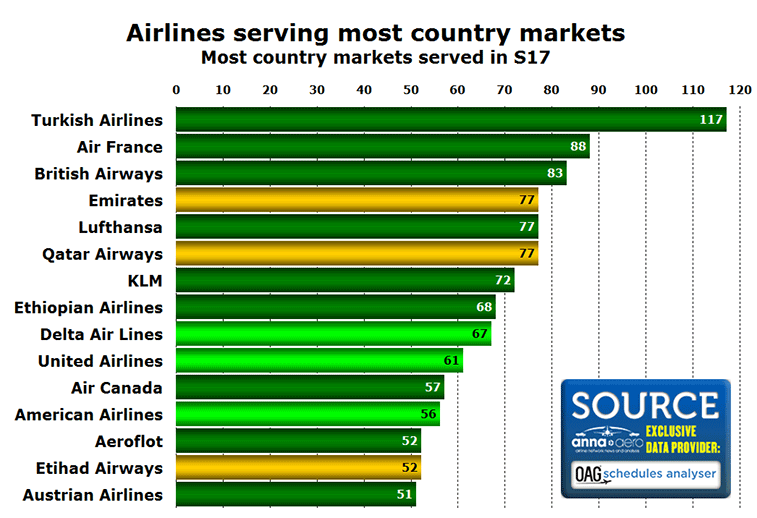 The top three airlines when it comes to most airports served are the USB3 (shown in bright green). While many of their domestic services to smaller, regional communities are operated by partner airlines, this analysis focuses on the marketing airline. There is little to choose between them based on current OAG data for S17 with all three serving between 340 and 350 airports. Given that airlines as big as American, Delta and United regularly tweak their schedules, by the actual start of the summer season these figures may have changed slightly, but for now American Airlines leads the way serving 349 airports.

All three major Chinese carriers feature (shown in red), but only one of the MEB3 carriers, Qatar Airways (shown in orange) makes the top 15 by this metric. The remaining carriers are all based in Europe with the exception of Air Canada. Leading the way for Europe is Turkish Airlines, followed by British Airways and Lufthansa. Ryanair and Vueling, which do not operate long-haul services, are the leading LCCs with 192 and 160 airports respectively. 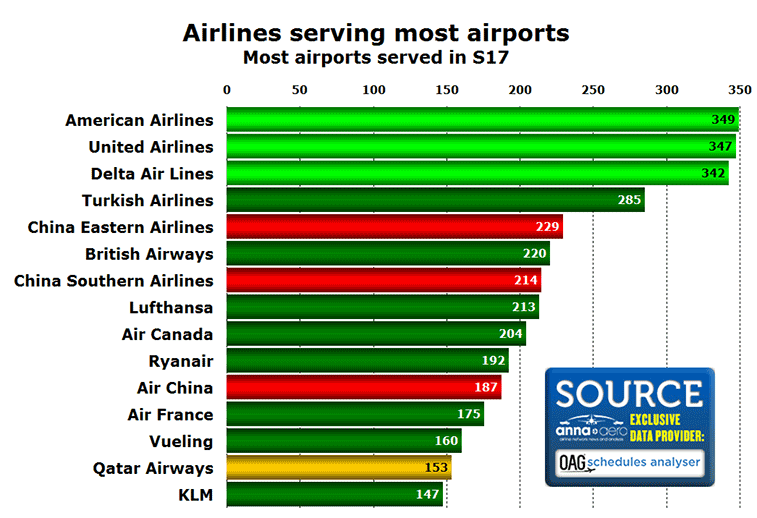 Five airlines managed to feature in the top 15 of each of the metrics examined; the three remaining intercontinental US carriers (American, Delta and United), Air Canada and Turkish Airlines.

If you are wondering which airports are served by the most airlines, serve the most country markets or have the most non-stop routes, then check back in seven days’ time when all will be revealed. You may have already guessed one winner… 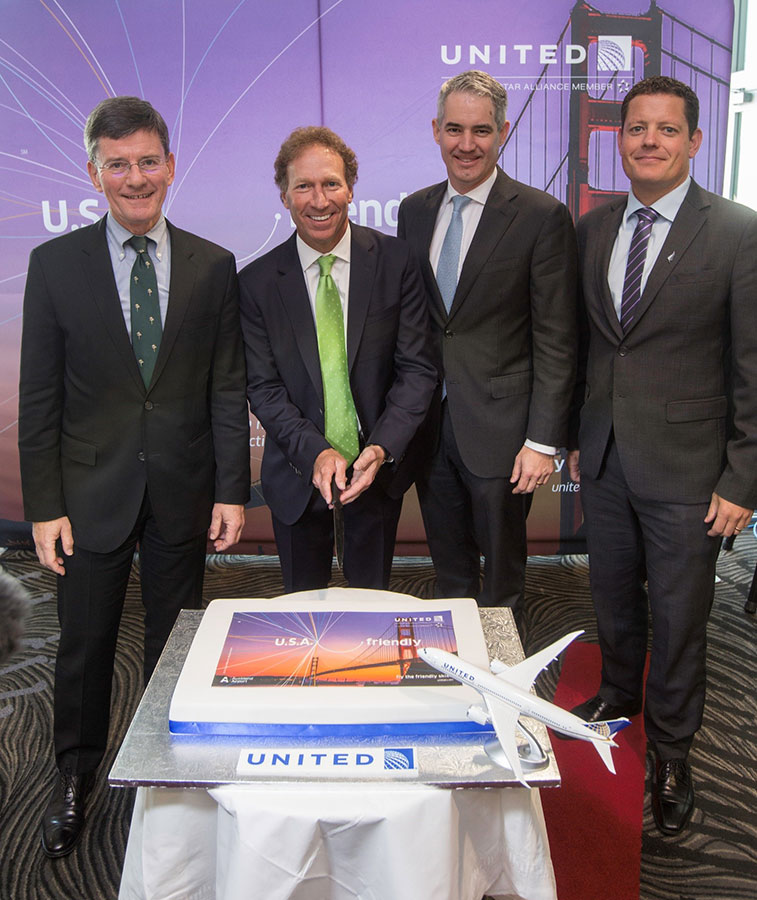 United Airlines is one of three US airlines which serves between 340 and 350 airports in S17 according to OAG data. The most recent addition to its network was Auckland in New Zealand. The Star Alliance carrier began service from San Francisco on 1 July 2016, returning to the New Zealand market after an absence of 13 years.