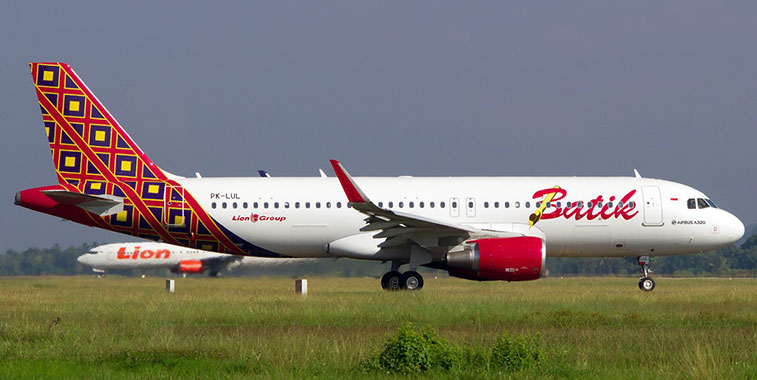 Batik Air’s fleet now comprises 41 aircraft including 27 A320s each of which comes equipped with 12 seats in Business Class. Last year saw 14 A320s join the fleet. While currently almost entirely devoted to domestic flying in Indonesia the carrier is planning to serve various Australian destinations in 2017, starting with a route from Bali to Perth.

Until recently the airline has been focussed on the Indonesian domestic market. However, the carrier was recently granted traffic rights to serve Australia, with Perth expected to become the airline’s first destination, especially as Malindo Air (Lion Group’s Malaysian-based LCC) already serves the Western Australian airport from Kuala Lumpur.

According to OAG schedule data, Batik Air serves over 30 airports across Indonesia and Singapore. Its two busiest are in the capital, Jakarta. Not only does the carrier have a significant presence at the country’s busiest airport (Soekarno–Hatta International Airport), but also at the city’s second airport (Halim Perdanakusuma International Airport). The airline operates at least five flights per day from 14 Indonesian airports according to OAG data. 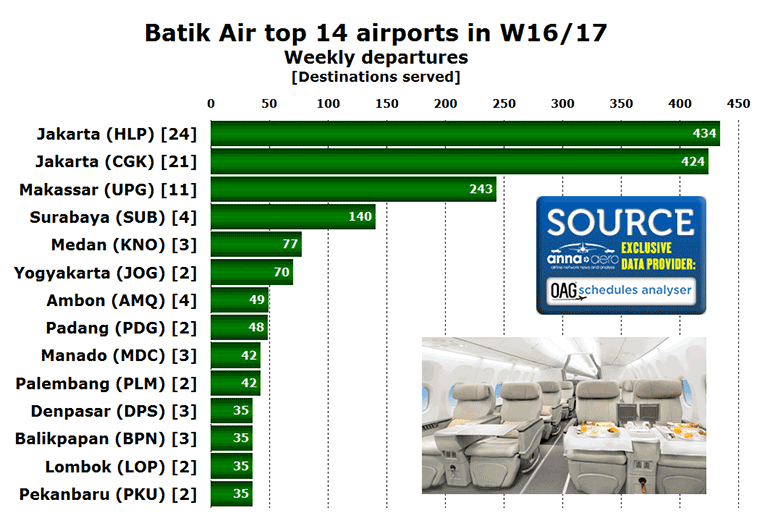 Schedule data for this week indicates that Batik Air is now the third biggest carrier in the Indonesian market with 12.2% of seat capacity. Ahead of it are parent company Lion Air with 35.1% and the state-owned flag carrier Garuda Indonesia with 20.2%. Garuda’s subsidiary Citilink Indonesia has a further 9.5% of the market followed by Sriwijaya Air with 8.6%. The average weekly frequency across all of Batik Air’s network is 17.8 flights per week, in other words between two and three flights per day.

The airline’s longest sector, at 3,771 kilometres is from Jakarta (CGK) to Jayapura (DJJ), which is flown daily using the airline’s 737-900s. The route is also served by Garuda and Lion Air. In comparison the planned international route from Denpasar, on the holiday island of Bali, to Perth, is just 2,580 kilometres in length. 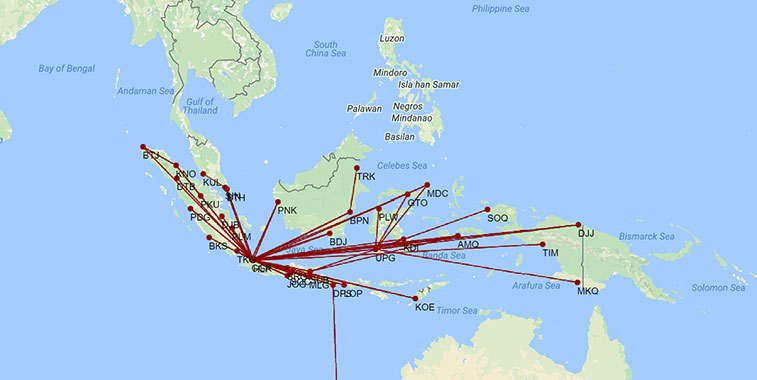 Jakarta’s location makes it a natural hub for flights around Indonesia. Batik Air operates from both of the airports serving the Indonesian capital. The vertical line heading down to Australia is between Denpasar in Bali and Perth. While the route is shown in OAG data it has not yet launched, although it is likely to become the airline’s first service to Australia at some point in the near future.