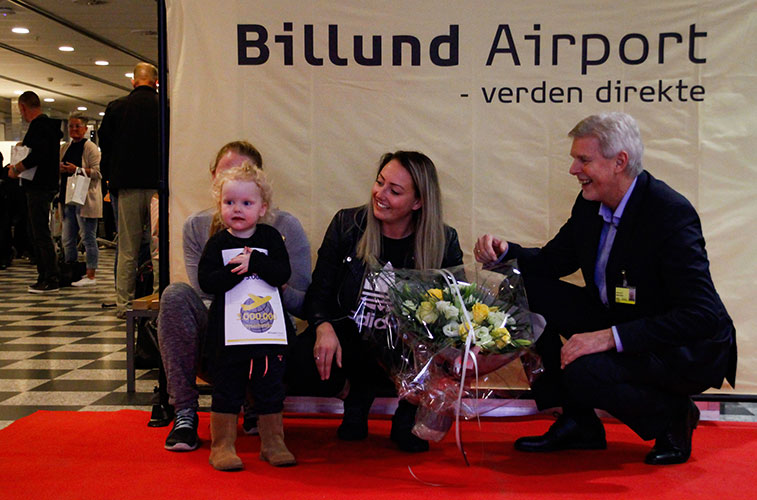 On 14 December Billund Airport celebrated its three millionth passenger of 2016, two-year-old Milia Skjerbæk. Airport Director Kjeld Zacho Jørgensen was there to hand over gifts, flowers and champagne (for her mum). Billund has seen passenger numbers virtually double since 2003 when fewer than 1.6 million passengers passed through the airport.

Billund Airport, Denmark’s second busiest after Copenhagen, passed the three million passenger milestone for the first time in 2016. Probably best known globally as the headquarters of the Lego Group and its adjacent Legoland theme park, Billund is a relatively small town of fewer than 10,000 people. However, the airport’s catchment area of Western Denmark is home to around three million people. 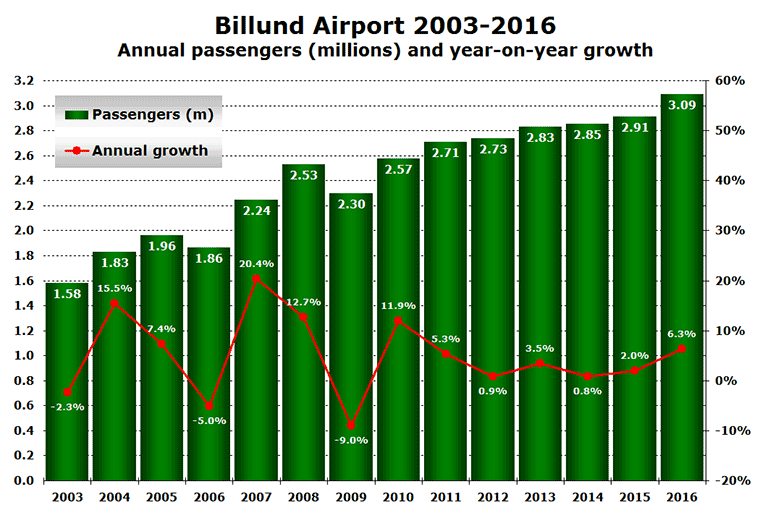 The airport’s seasonality profile is remarkably consistent as can be seen in the monthly traffic data graph. Using anna.aero’s Seasonal Variation In Demand (SVID) calculator Billund scored a “good” 9.78 in 2016, with the peak summer month of July welcoming two-and-a-half times as many passengers as January. In November and December of 2016 the airport recorded growth of 17% and 20% respectively, the first double-digit monthly increases for several years. 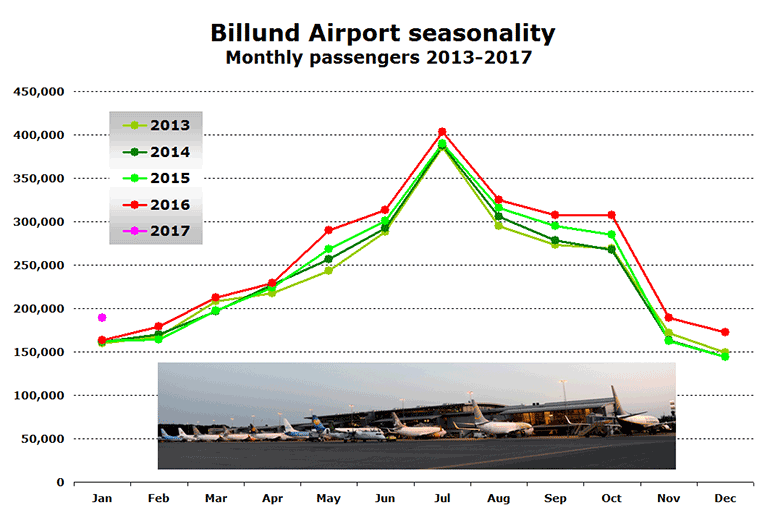 According to OAG schedule data the airport’s biggest airline in 2016 remained Ryanair, ahead of KLM, SAS and Lufthansa. Ryanair made the airport a base in S12 but withdrew its based aircraft after issues regarding interpretation of local employment law. Since starting flights to Billund in November 2006 (from Pisa), the Irish carrier has operated 21 routes, of which 11 will be flown this summer, following the re-introduction of flights to Chania in Greece.

Billund also welcomes many charter carriers whose operations are not included in OAG data. Primera Air, which operates a mix of scheduled and charter services, is currently listing 20 destinations across seven countries (Bulgaria, France, Greece, Italy, Portugal, Spain and Turkey) as bookable from Billund. Ten of the destinations are in Spain, three each in Greece and Portugal, and one each in the four remaining countries.

The airport has grown its portfolio of scheduled carriers in recent years with the addition of Icelandair (to Reykjavik/Keflavik in 2011), Turkish Airlines (to Istanbul Atatürk in 2012), airberlin (to Berlin Tegel in 2015), Brussels Airlines (to Brussels in 2015), Czech Airlines (to Prague in 2015), Wizz Air (to Gdansk in 2015) and Finnair (to Helsinki in 2016). As part of its restructuring airberlin is ending its Berlin Tegel service at the end of the current W16/17 season. 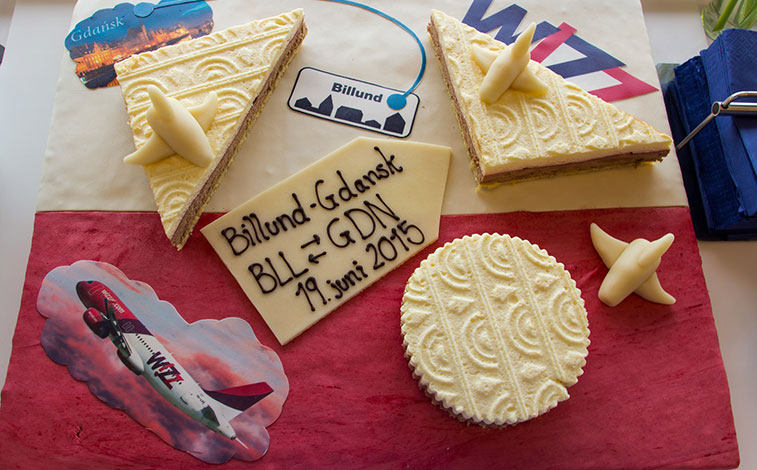 Wizz Air arrived in Billund on 19 June 2015 from its base in Gdansk. It has since launched four more routes from Bucharest, Cluj-Napoca, Tuzla and Vilnius and will be adding a sixth route, from Warsaw Chopin, this summer.

Wizz Air has grown rapidly at the airport. After launching service from Gdansk in June 2015 it has added flights from Vilnius (September 2015), Cluj-Napoca (July 2016), Tuzla (October 2016) and Bucharest (December 2016). Flights from the airline’s base at Warsaw Chopin are set to begin this summer. 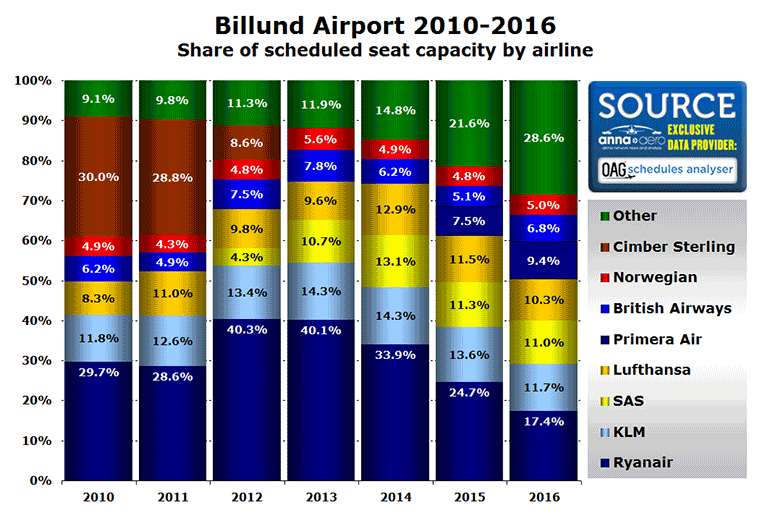 Spain is by far the airport’s leading country market according to OAG schedule data for this summer. Scheduled capacity this summer to Spain is currently set to see growth of almost 20%. However, there are currently no non-stop services to Madrid, which was a Skyscanner Unserved Route of the Week last June. Germany is likely to see a double-digit reduction in seat capacity as a result of airberlin’s withdrawal from the Berlin route, though it may yet reappear as a Eurowings service at some point in the future. 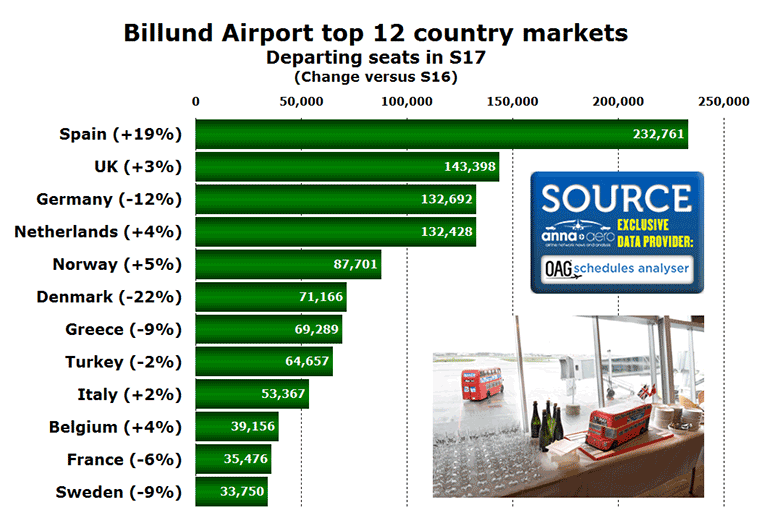 Given Ryanair’s presence at the airport it is surprising that there are no scheduled services to Ireland, especially Dublin. Scandinavia’s two biggest home carriers, SAS and Norwegian, both have modest networks from the airport. SAS offers connections to each of its hubs in Copenhagen, Oslo Gardermoen and Stockholm, while Norwegian also connects to its main hub in Oslo but also offers flights to Alicante and Barcelona in Spain.

Looking ahead, apart from Wizz Air’s new service to the Polish capital, SunExpress is launching flights to Antalya this summer while Primera Air is starting scheduled flights to Alicante, Kalamata and Lisbon. 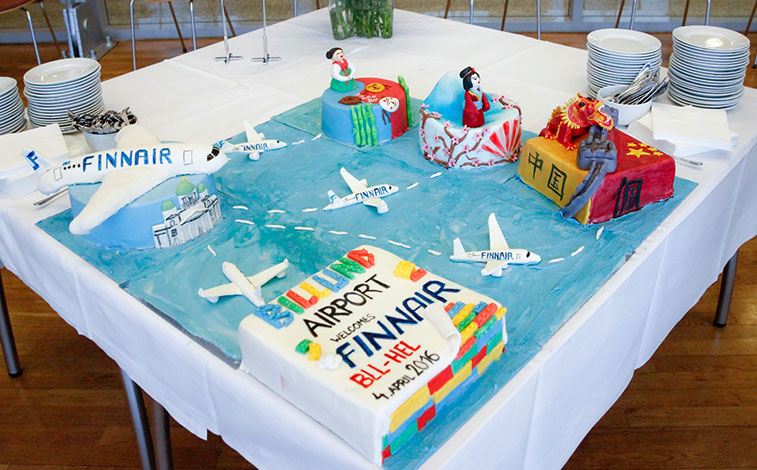 Finnair was the most recent flag-carrier to begin serving Billund. The oneworld carrier introduced daily flights from Helsinki using its E170s on 4 April 2016. Another oneworld carrier, British Airways, began an 11 times weekly London Heathrow service on 3 May 2016 using A319s.