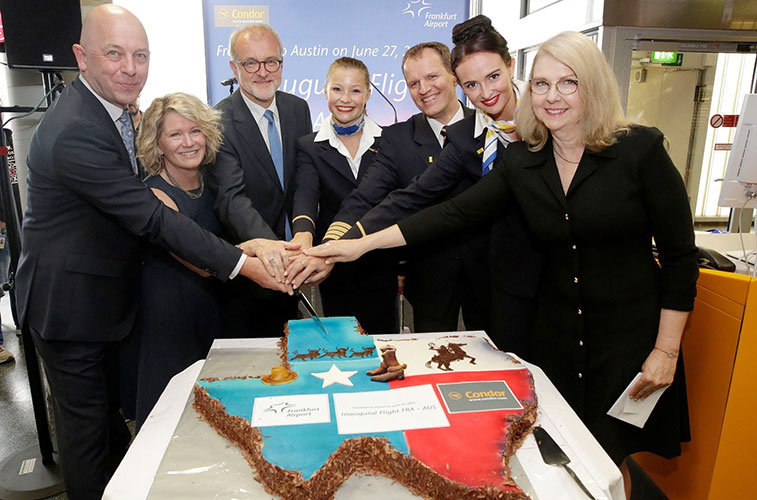 Frankfurt will this summer have non-stop flights to almost 300 destinations. One of the newest is Austin-Bergstrom in Texas. Condor began serving the route last June. This summer the leisure airline is also launching new US services to New Orleans, Pittsburgh and San Diego.

After our analysis last week of the S17 season looked at from an airline perspective, this week we have run a similar analysis from the point of view of airports. Again using OAG schedule data for S17 (from the end of March to the end of October) we identify the airports with the most non-stop routes, most country markets served and most airlines offering scheduled services. Clearly, airlines are still actively finalising and fine-tuning their summer schedules so these figures are a snapshot of currently planned activities. Incidentally, OAG’s S17 data currently shows scheduled services at just under 3,700 airports worldwide.

German flag-carrier Lufthansa’s main hub at Frankfurt is the clear winner when it comes to range of destinations offered with non-stop flights. According to current schedule data passengers can fly to 293 destinations on non-stop flights this summer, 20 more than from the airport’s closest rival, Istanbul Atatürk in Turkey. Three more European airports, Paris CDG, Amsterdam and Munich round out the top five. Positions six to 10 are all taken by non-European airports, including three from the US (shown in bright green) and one each from Asia (in red) and the Middle East (in orange). In positions 11 to 15 are two UK airports, two Spanish airports and one in Italy.

Notably absent from this list is Europe’s busiest airport, capacity constrained London Heathrow, which ranks in 19th place with 190 destinations served non-stop this summer. This is behind Vienna (192), Houston Intercontinental (191) and Toronto Pearson (191). 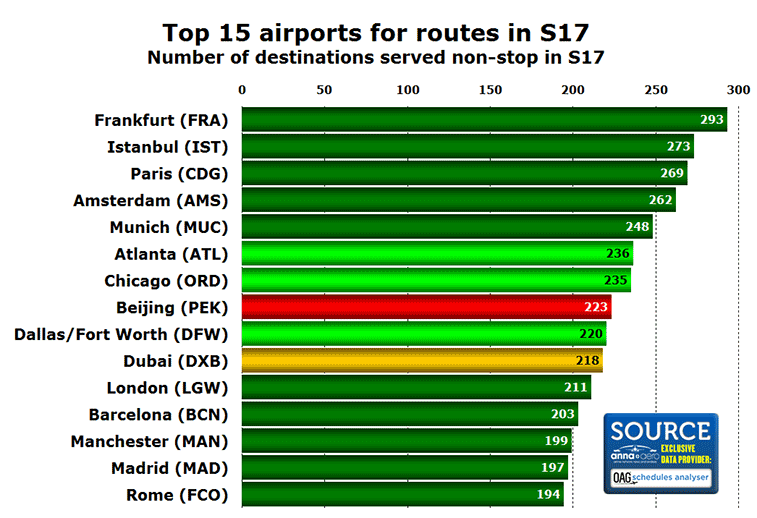 Two airports, both in Europe, are the only ones worldwide to offer non-stop flights to more than 100 countries. Paris CDG (connected to 108 countries) edges out Istanbul Atatürk (104) this summer. Frankfurt completes a European clean sweep of the top three places. Only three non-European airports make the top 15 led by Dubai in fourth place which offers non-stop service to 96 countries. New York JFK in seventh place is the only US airport, with Doha just behind in eighth place. No Asian airports make the top 15. Beijing offers non-stop service to 57 countries the same number as can be reached from Africa’s leading airport in these rankings, Addis Ababa. 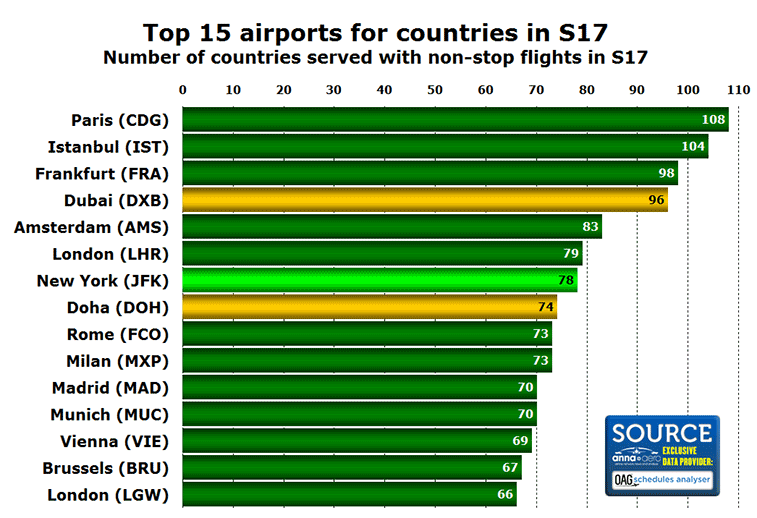 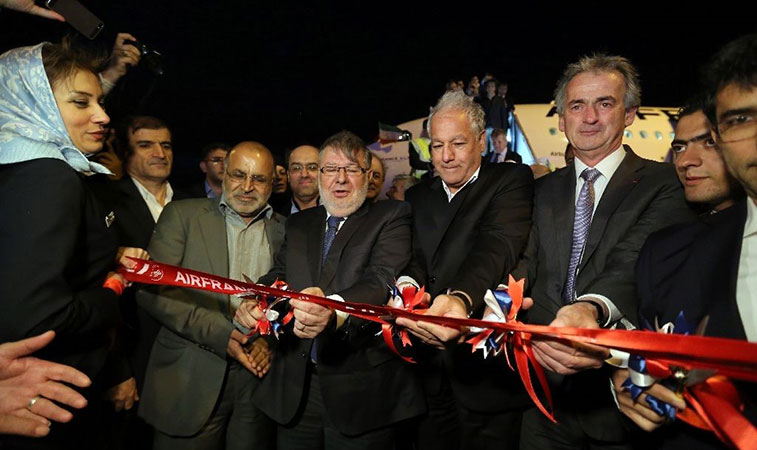 Paris CDG is one of only two airports worldwide to offer non-stop flights to more than 100 different countries. On 17 April 2016 services resumed to Iran when Air France re-introduced flights to Tehran for the first time since October 2008.

When it comes to airports with the most airlines, there is a very clear winner. While the difference between second ranked Frankfurt and 15th placed Singapore is just 18 airlines, Paris CDG has 19 more than Frankfurt and is the only airport in the world to welcome scheduled services from more than 100 airlines. OAG data does not yet reflect that Frankfurt has closed the gap slightly on CDG this week by announcing on 14 February that Wizz Air will start service from May, with a daily services to Sofia.

Asian airports make a better showing using this metric, with Bangkok Suvarnabhumi in fourth place and Hong Kong in sixth. Beijing and Singapore both also make the top 15, which features just one US airport, New York JFK. 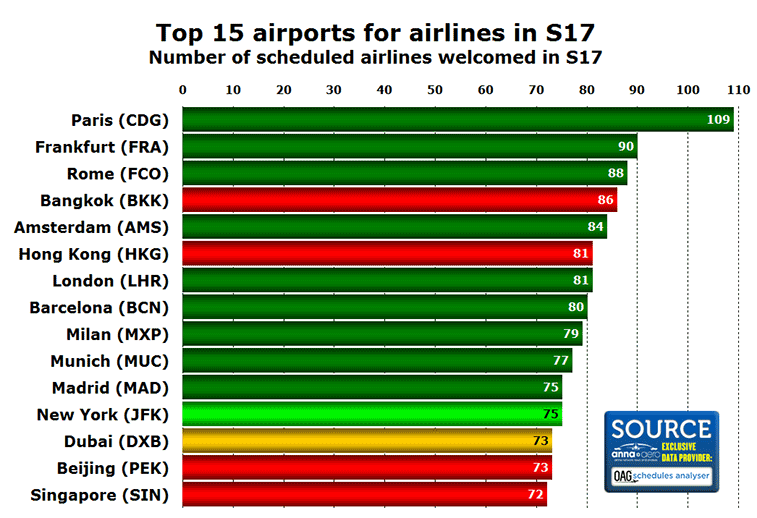 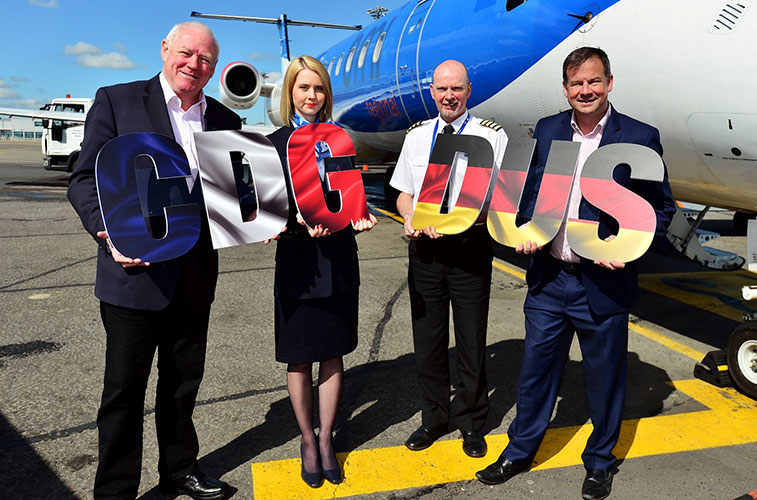 Paris CDG will welcome over 100 scheduled airlines this summer, including bmi regional which began flights from Bristol in April 2015. CDG’s newest airline this summer will be FlyOne which starts seasonal flights from Chisinau in Moldova on 14 April.