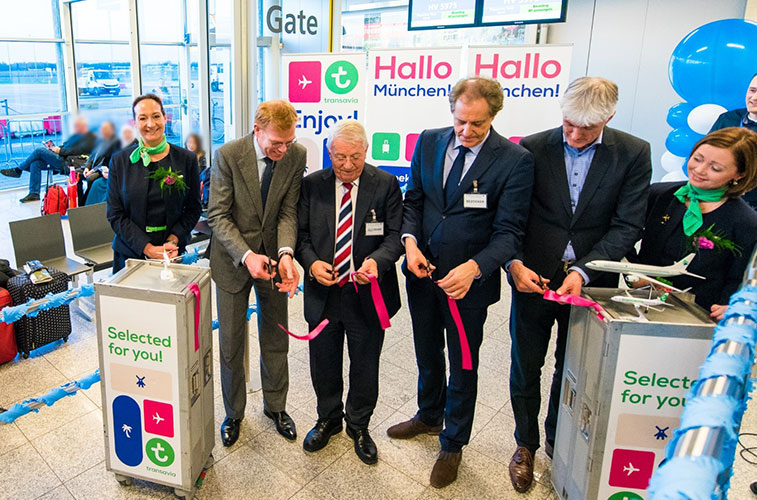 Almost exactly one year ago, on 19 February 2016, Transavia began non-stop service from Eindhoven to Munich. The German airport would become a base a few weeks later. However, at the end of the S17 season the Dutch LCC will close the base though flights from Amsterdam and Eindhoven are likely to continue.

The recent announcement that KLM’s in-house LCC Transavia will be closing its Munich base (which it only opened last summer) will not have come as a huge surprise, given Lufthansa’s recent decision to make the Bavarian airport a significant base for its own in-house LCC, Eurowings. The Dutch carrier (IATA code: HV) shares the same name and product features as the French LCC Transavia (IATA code: TO), but has been around considerably longer.

Looking at seasonal seat capacity since the summer of 2007, the Dutch LCC (the focus of our analysis here) began to grow rapidly starting in 2010. Since then capacity growth during the seven-month summer season has been greater than 10% every year except for 2015. Last year’s venture into the German market was not the first time the carrier has tried to grow outside of its home market. In late 2008, the LCC opened a base in Copenhagen following the collapse of Sterling. However, by the end of 2010 nearly all routes from the Danish capital had been suspended. 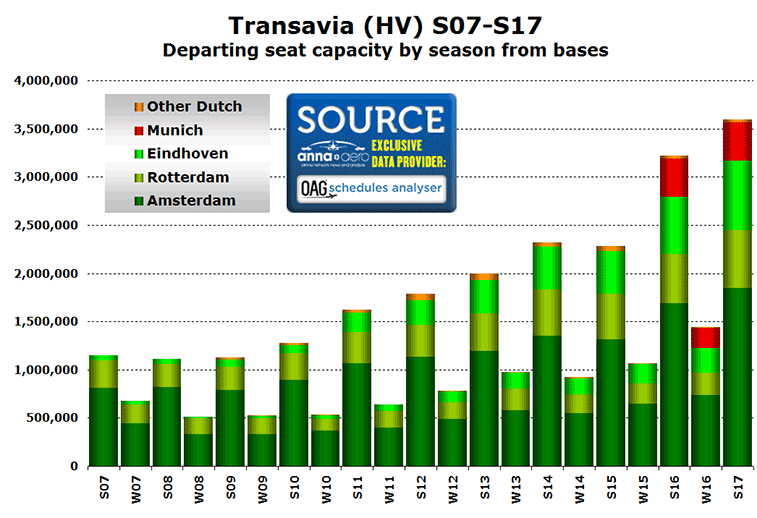 With its strong focus on leisure markets the airline’s winter capacity is considerably less, even allowing for the fact that the winter season is only five months long. Even without the capacity boost from a four-aircraft operation in Munich, Transavia’s growth was significant in 2016, notably from its main Amsterdam base.

Looking at S17 capacity from the airline’s Dutch bases confirms the importance of the Spanish market. Routes to airports in Spain account for over 44% of all of Transavia’s flights this summer, four times more than the next biggest country market, Italy. The nation in second spot is the biggest of six country markets in the top 15 showing a year-on-year decline in Transavia flights (shown in red). Overall, the number of flights from Dutch airports is up 11% this summer. The fastest-growing markets among the top 15 in S17 are Czech Republic (+52%), Israel (+35%), Cyprus (+32%) and Croatia (+20%).

More significantly, Transavia is offering scheduled services to eight new country markets this summer; Albania, Bulgaria, Finland, Poland, Serbia, Slovenia, Sweden and Switzerland. All of these are launching from Amsterdam with the exception of Stockholm Arlanda in Sweden, which is being served from Eindhoven starting on 3 April. 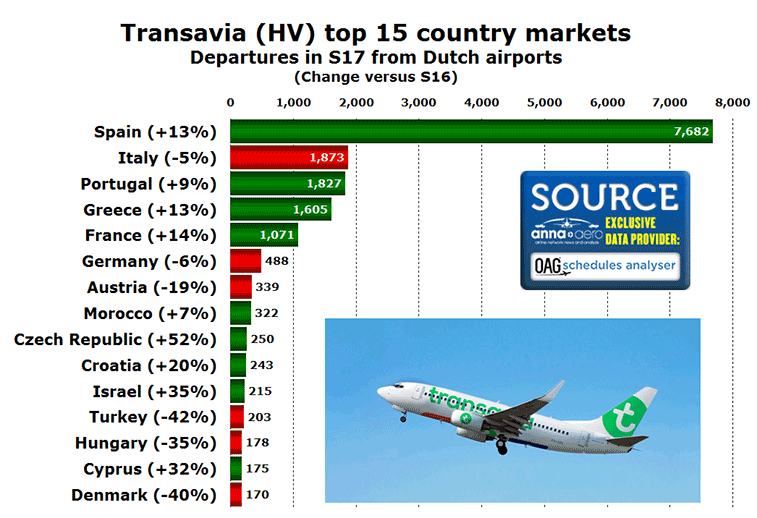 Looking at a route level, nine of Transavia’s top 15 routes by flights this summer are to Spain, including six of the top seven, and all of the top three; Malaga, Barcelona and Alicante. Faro and Lisbon in Portugal are the leading non-Spanish destinations. With eight new country markets coming on stream this summer that means at least eight new destinations. These are Belgrade (Serbia), Helsinki (Finland), Katowice (Poland), Ljubljana (Slovenia), Sofia (Bulgaria), Stockholm (Sweden), Tirana (Albania) and Zurich (Switzerland). In addition, Almeria, Kalamata and Reus are returning to the network, while Comiso in Italy and Pula in Croatia are new destinations in existing country markets. Destinations missing this summer that were served last summer with scheduled services include Izmir in Turkey and Turin in Italy. 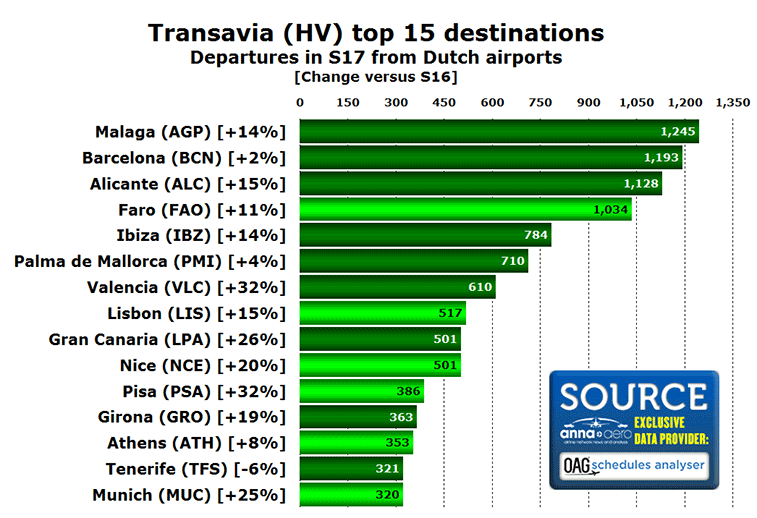 Despite the ending of the Munich base at the end of October, it is worth noting that Transavia is still starting four new routes from the airport this year; to Amsterdam (17 February), Barcelona, Dublin and Stockholm (all from 26 March). Routes that were served in S16 that have not returned for the S17 season are Bari, Pisa and Venice Marco Polo. 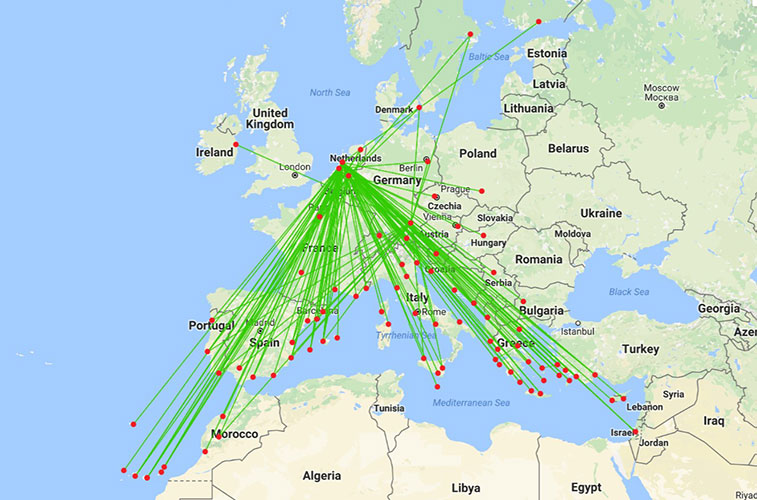 Transavia’s Dutch and Munich-based fleet of 39 737s (of which 31 are -800s) will operate a network of over 130 routes this summer. Notable omissions on the LCC’s route map are Norway and the UK, although Oslo has been served from Rotterdam in the past and three London airports (Gatwick, Luton and Stansted) have all had non-stop flights from either Amsterdam or Rotterdam with the carrier, though the last of these, between Rotterdam and Gatwick, was back in October 2010.