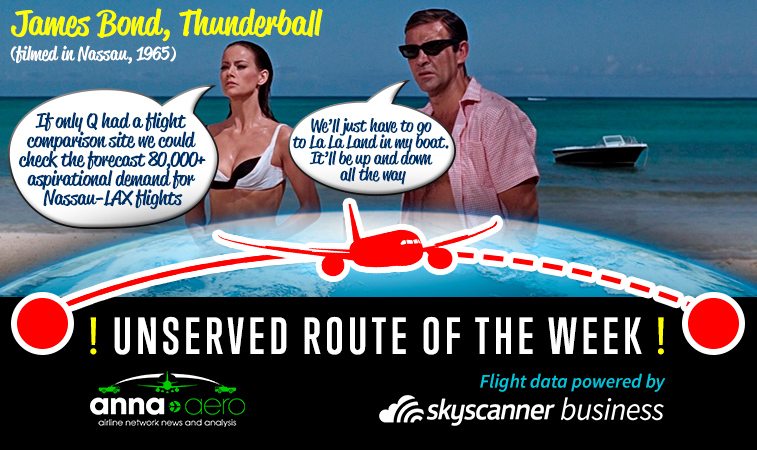 Nassau Airport’s Jan Knowles, VP Marketing & Communications, reckons that demand for a Nassau-Los Angeles service could be as high as 80,000 – if there was a non-stop operation: “Growth on this potential route is 10-20% pa, and LAX is Nassau’s largest market unserved by a non-stop.” (Skyscanner’s Travel Insight is THE software airports need to check these forecasts!)

With over 64,000 searches in the last year, a potential new route from Nassau to Los Angeles (LAX) has been identified as this week’s “Skyscanner for Business-anna.aero Unserved Route of Week” – a powerful analysis based on aspirational data captured from the Skyscanner.net flight comparison site used by +60 million unique visitors per month. “Currently, some 40,000 annual passengers travel between these destinations, but our analysis suggests that this number could more than double with the addition of a non-stop operation,” suggests Jan Knowles, VP Marketing & Communications from Nassau Airport. “Indeed, passenger growth on this potential route is growing 10 to 20% year-on-year, and LAX is Nassau’s largest market as yet unserved by a non-stop.” 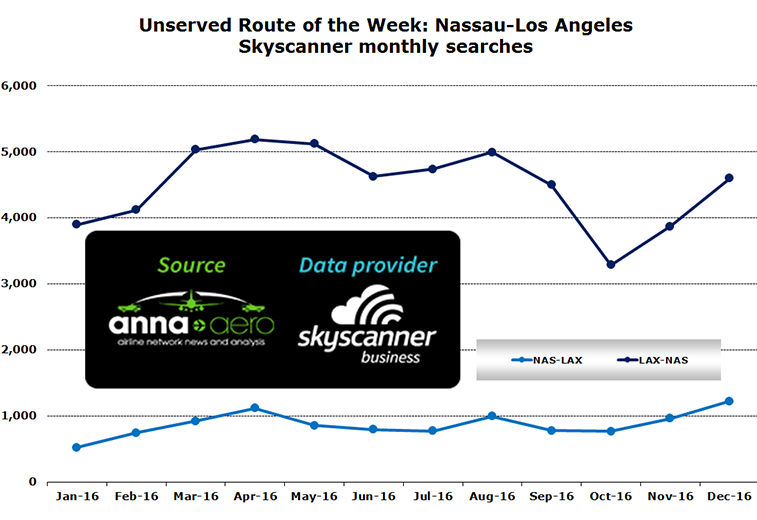 anna.aero wants American or Delta to start this route

Unsurprisingly, Skyscanner demand on this week’s unserved route shows a significant bias towards the US end of the much-wanted city pair, with an 84/16 split, so on this basis we looked at potential carriers at the LAX end first. Los Angeles is not really dominated by any one airline, with the biggest four carriers  – American Airlines (20%), Delta Air Lines (16%), Southwest Airlines (14%) and United Airlines (13%) – almost equally splitting the 63% of weekly seats they command, according to OAG data for the week commencing 21 February. At the moment, only two carriers operate services from LAX to the Caribbean, with Alaska Airlines (#5 carrier at the airport, with 4.6% share of seats) flying a daily service to Havana, and American offering a weekly rotation to Montego Bay. Either of these carriers should be considering Nassau as the next logical step in their respective network growth plans to the region, as both have only recently entered the LAX-Caribbean market – American launched its Jamaican service in December 2015, while Alaska started its Cuban service just last month.

American also comes out on top when considering each of the top five LAX airlines and their various commitments to Nassau from other cities. With five of its hubs already connected to Nassau – Miami (42 weekly flights), Charlotte Douglas (19), Philadelphia (nine), Washington Reagan (three), Dallas/Fort Worth (two) – offering a total of 7,415 weekly seats, clearly the oneworld carrier has plenty of experience in the market. Delta, with 5,404 weekly seats, is next biggest airline, offering flights to five of its hubs from Nassau (Atlanta, New York JFK, Boston, Detroit and Minneapolis-St. Paul). The SkyTeam carrier is therefore also well positioned to start this route, with United (1,958 weekly seats; four hubs) and Southwest (1,144 weekly seats; two hubs) both some way behind. Alaska Airlines currently has no flights to Nassau. One point to remember about any of these carriers starting a non-stop service from LAX to Nassau, is that they will possibly lose any transfer traffic they are currently carrying to the Bahamas via their respective hubs – but will also probably attract some of these volumes from competing carriers too. “Nassau to Los Angeles has long been a strategic target for us, to both serve a booming Los Angeles market, and to offer West Coasters a quick connection to Nassau. In fact, some 50,000 travellers from other markets on North America’s west coast [San Francisco, Seattle, etc.] made their way to Nassau in 2015 alone,” adds Knowles helpfully.

Contemplating the Bahamian end of the route, the potential carriers at Nassau were considered next. Unsurprisingly, local carrier Bahamasair is the largest airline at the airport, with 23% of weekly seats, ahead of its nearest rival, JetBlue Airways, with 16%. The #1 carrier currently serves four US destinations, three in Florida (Fort Lauderdale, Miami and Orlando) and one in the US Midwest (Chicago). Its present fleet is probably the biggest limiting factor against the start of a Californian connection, as it operates three ATR 42-600s, two ATR-72-600s and three 737-500s, according to ch-aviation. While JetBlue has the kit to fly LAX from Nassau, it generally operates inbound services to the islands from five of its US East Coast hubs – Fort Lauderdale, JFK, Boston, Orlando and Reagan –  so it is perhaps unlikely to be considering a service to LAX at this stage (because it is not a hub or base). On this basis, Knowles must clearly feel that any sort of service is more likely to originate in LAX rather than Nassau.

When looking at the previous year of search data, the busiest month for potential traffic flows (for both directions on the route combined) is April 2016, with over 6,300 searches, over 2,200 higher than the lowest monthly figure, which was recorded in October 2016 (4,100 searches). The seasonality profile of this search data is less extreme than the last Unserved Route of the Week (Larnaca to Madrid) with the low-month traffic representing 64% of the highest month. According to OAG Traffic Analyser, because there is no direct service, the top three connecting options chosen by those passengers who did book travel between LAX and Nassau in the past year indicates that the majority of connecting travellers use Atlanta (23.9%) Miami (23.7%) and Fort Lauderdale (13%). In total 32 different airports were used as transfer points by those travellers who did fly between Nassau and Los Angeles.

Indeed, an O&D that is not served by a non-stop flight will typically display a low purchase rate and low traffic. In this instance Skyscanner’s Travel Insight indicates a monthly average of 2.9% for the Nassau to LAX route (see graph below). Therefore, if there was a Nassau to LAX route, and if bookings performed in line with the “Skyscanner market average” for direct services at both airports (6.2%), the airline operating this route could immediately expect an improved purchase rate of 114%, without any increased marketing spend. However, with 64,000 annual searches a three or four times weekly service should be immediately viable for the airline selecting to start this potential city pair. “With a growing population and rising household incomes due in part to increasing private employment, Los Angeles is poised to be a fantastic non-stop access point to the natural splendour and luxury vacation vibes of The Bahamas, through the country’s largest and most-awarded airport, Nassau,” concludes Knowles. 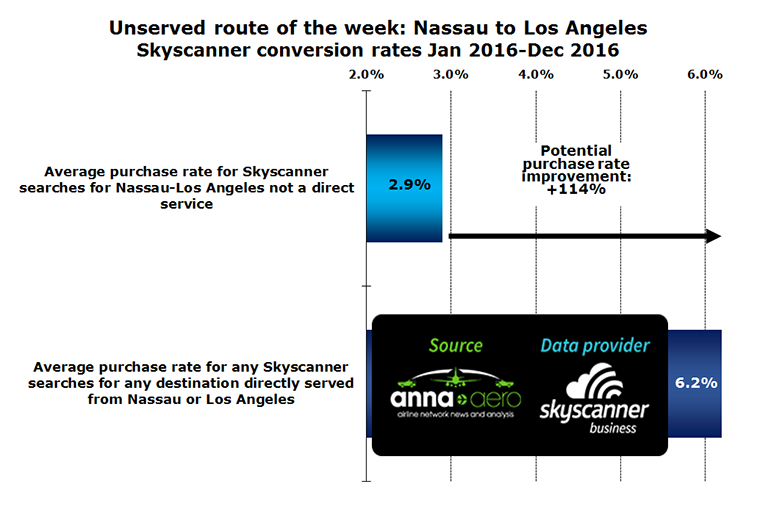