Over 50 new services added between Europe and US this summer; airberlin, Norwegian and WOW air adding most capacity versus S16 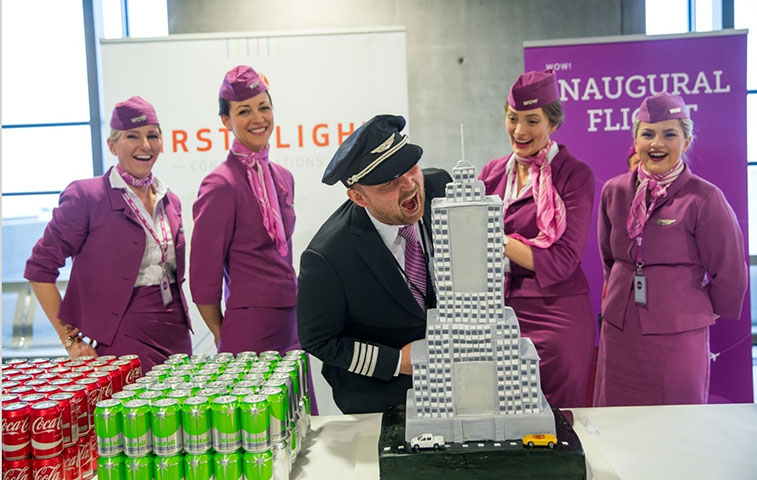 WOW air is taking an ever bigger bite of the Europe-US market. Last November it began flights to Newark, while this summer will see the Icelandic LCLH (low-cost long-haul) carrier begin new flights from Reykjavik/Keflavik to Miami (in April) and Pittsburgh (in June). Only airberlin and Norwegian have added more seats on routes connecting Europe and the US between S16 and S17.

While Europe and the US may both be experiencing more than usual political uncertainty, it seems the demand to travel between the two is on the rise, at least based on anna.aero’s analysis of the number of new services that will be on offer this summer. According to our analysis of current schedule data for S17 and comparing it with S16, we have identified 51 new services that will be on offer to passengers. However, it should be noted that airlines have also withdrawn 23 services between Europe and the US since last summer, leaving a net gain of 28 services.

Analysing seat capacity this summer confirms that the three legacy US carriers – the USB3 (US Big 3) of American Airlines, Delta Air Lines and United Airlines (shown in bright green) – remain the three biggest, with British Airways and Lufthansa the two biggest European carriers. While overall seat capacity across all carriers is up 6%, none of these five leading carriers have changed their capacity (either up or down) by more than three percentage points. European flag-carriers (shown in dark green) are joined by three non-flag carriers (shown in red) in the top 15. Two of these three (airberlin and Norwegian), are the fastest-growing among the top 15. 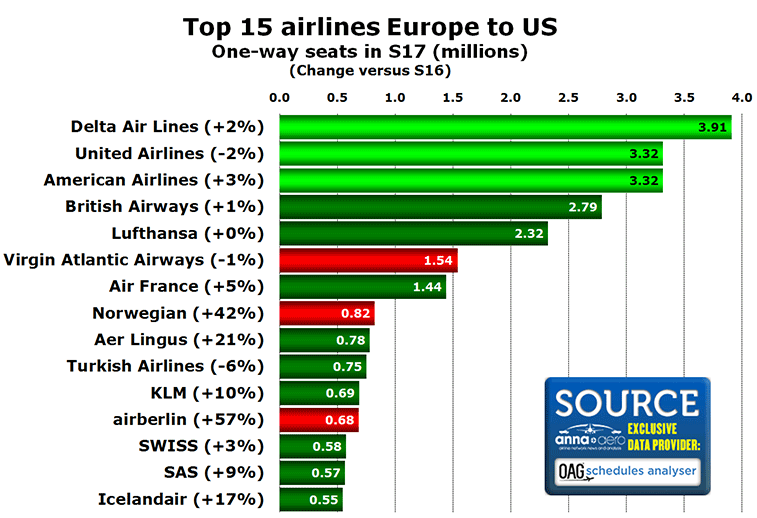 Just outside the top 15 are the Italian and Spanish flag-carriers (Alitalia and Iberia) with relative newcomer, WOW air of Iceland, already ranked 19th, just ahead of another batch of flag-carriers; Aeroflot, TAP Portugal, Austrian Airlines and LOT Polish Airlines. Emirates is ranked 25th thanks to its new Athens to Newark service joining its existing Milan Malpensa to New York JFK service.

While the biggest carriers are not making many adjustments to their Europe-US networks, several of the smaller airlines are generating the biggest increases in seat capacity across the summer season. airberlin and Norwegian are both adding almost a quarter of a million additional one-way seats to their US networks this summer. airberlin is adding three new routes (one from Düsseldorf and two from Berlin Tegel) and beefing up capacity on several others, while Norwegian is launching four routes from Barcelona (starting in June) as well as new links from Paris CDG (to Orlando) and Copenhagen (to Oakland). 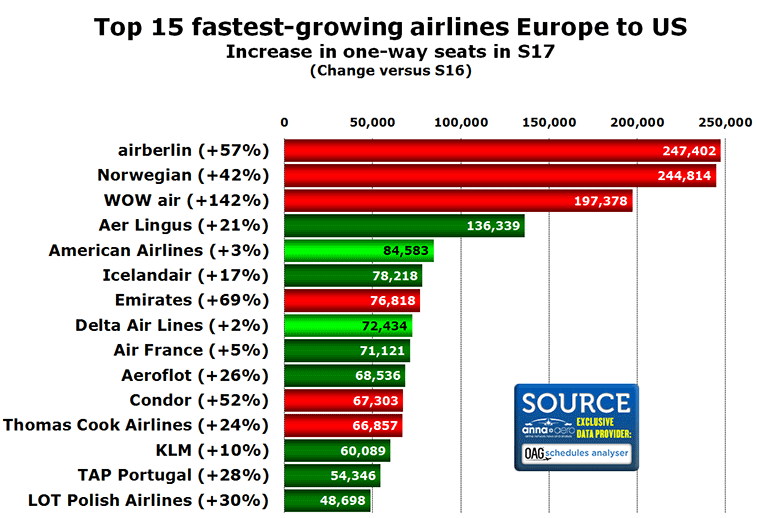 However, the fastest-growing in percentage terms (among the top 15 for growth) is WOW air. The Icelandic carrier is adding Miami (in April) and Pittsburgh (in June) to its Reykjavik/Keflavik network having introduced Newark services last November. It already served Boston, Baltimore/Washington, Los Angeles and San Francisco. Also growing rapidly this summer (by 228%) but from a much smaller base is Eurowings. In July, Lufthansa’s in-house low-cost long-haul (LCLH) carrier is adding new routes from Cologne Bonn to Las Vegas, Orlando and Seattle-Tacoma.

Virgin Atlantic Airways has been busy fine-tuning its US network. It has dropped its seasonal Heathrow to Chicago O’Hare service and will be ending flights to Detroit at the end of March. Shareholder Delta will however be increasing frequency on its Detroit service to compensate. In return, Virgin Atlantic is taking over Delta’s Seattle-Tacoma service from Heathrow, and will be adding new routes from Manchester to Boston, New York JFK and San Francisco.

New Orleans becomes newest US destination to be connected to Europe

Last year saw Hartford in Connecticut re-join the list of US airports served non-stop from Europe, when Aer Lingus began service from Dublin. This year New Orleans will welcome its first scheduled non-stop services to Europe since 1982, when Condor begins flights from Frankfurt on 3 May, followed by British Airways starting operations from London Heathrow on 27 May.

Oakland in California is also set for significant European growth this year. Norwegian began flights from Oslo and Stockholm in May 2014, followed by London Gatwick in May 2016. This summer the Nordic carrier will add flights from Copenhagen (in March) and Barcelona (in June). In addition, British Airways will begin service from London Gatwick on 28 March.

With both IAG and Air France/KLM announcing plans for new LCLH airlines, and Lufthansa planning ambitious growth for Eurowings, several more new US-Europe routes are likely to be starting in the next couple of years. Whether any of the US carriers will respond by setting up their own LCLH airlines remains to be seen. Another possibility is that JetBlue, for example, might ‘do a WestJet’ and add some wide-body aircraft to its fleet. Meanwhile, other US airports such as Cleveland, Indianapolis, Jacksonville, Memphis, Milwaukee, Nashville and St. Louis will be hoping that they may soon be welcoming direct flights from Europe, even if only on a seasonal basis. 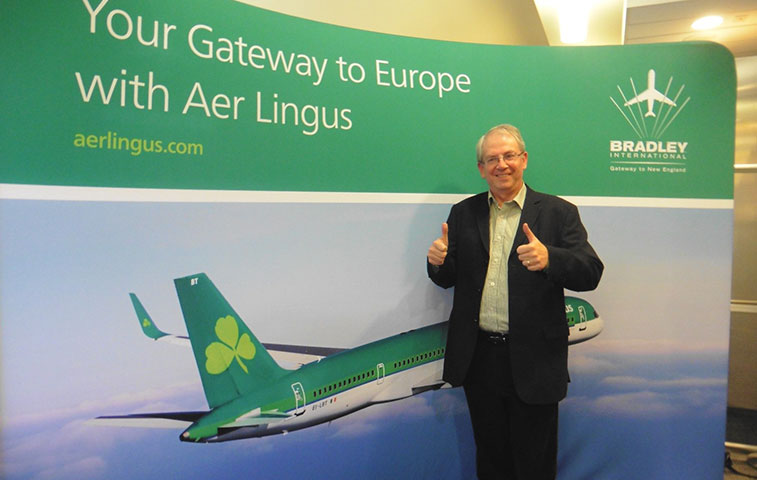 anna.aero’s Chief Analyst Ralph Anker gave the thumbs up to Aer Lingus’ new service from Dublin to Hartford which launched last September. He’s hoping to be a guest on a couple more US route launches this summer. Stay tuned to see which routes will get the anna.aero mega coverage in the months ahead.