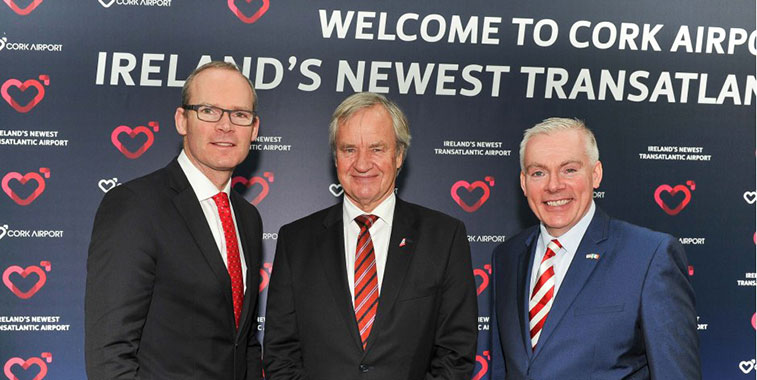 No wonder they are all smiling. Cork Airport will become the third airport in Ireland, joining Dublin and Shannon, with services to the US as a result of Norwegian deciding to launch flights from Providence to the airport on 1 July with its 737 MAX 8s. Celebrating the news were: Simon Coveney Irish Minister for Housing, Planning and Local Government; Bjørn Kjos Norwegian CEO and Niall MacCarthy MD Cork Airport.

If it wasn’t a market disruptor already, Norwegian’s announcement on 23 February that it was launching transatlantic flights from five cities in the UK and Ireland, will have had the CEOs at the US Big Three (USB3) – American Airlines, Delta Air Lines and United Airlines – reaching (again) for the speed-dial button to President Trump’s office on their phones about this noisy European LCC. Launching 38 new weekly services from Belfast International, Cork, Dublin, Edinburgh and Shannon airports, in total, it will launch 10 new transatlantic routes this summer, all operated by Norwegian’s 189-seat 737 MAX 8 aircraft.

With 38 weekly flights to cover, our data elves reckon that Norwegian will need up to six aircraft to operate the flying programme from early July when the Irish and Northern Irish flights commence. There is a tiny piece of slack in the schedule below, with the possibility of the airline adding two more rotations from Stewart, perhaps to another European destination. There are even gaps in the flying programme that will be utilised for 737 MAX 8 services within Europe, as Norwegian intends to use the aircraft on its existing Edinburgh to Oslo Gardermoen flights four times weekly from W17/18 in a period of downtime between US services.

Reading various media reports on the start of these operations, they state that the airline will be receiving six MAX 8s this year. If that is the case, all of them will be designated to the above transatlantic services. The same reports suggest that at least four of the MAX 8s will be based in the Boston and New York areas. It also worthwhile mentioning that Norwegian is the European launch customer for this aircraft, so introducing this type into its fleet will no doubt laden the LCC with the some of the start-up issues that acquiring a new piece of kit often comes with, albeit softened perhaps a little as it has a huge fleet of 737-800s. Indeed, the airline suffered when it brought the 787 into its fleet, requiring on occasions the use of wet-lease equipment in order to maintain schedules.

Straight in at #2 in Scotland

Looking ahead to the US market competitive landscape in S17, the addition of double-daily operations from Edinburgh will certainly have a marked impact on the incumbents, primarily the USB3. Prior to Norwegian’s arrival in Scotland (Edinburgh and Glasgow are the only airports which have US services), the USB3 would have commanded 89% of weekly capacity this summer. With the LCC’s schedule now clear, this share drops to 71% of the expanded market size. 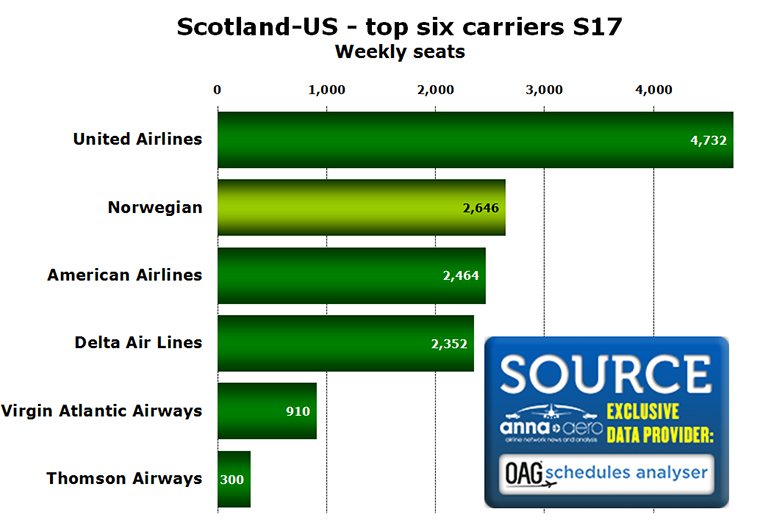 Norwegian’s capacity will add 25% more seats to the US this summer from Scotland’s airports, a sizeable increase which will be great for passengers wanting to get to the New York and Boston regions, but probably very detrimental to airline profits on these routes. United has perhaps the most to lose, as it operates double-daily services from New York Newark to Edinburgh and daily services to Glasgow in the peak season (w/c 14 August 2017), as well as daily flights from Chicago O’Hare to Edinburgh. Next most-exposed to the market disruptor’s arrival is Delta, which plans to offer a daily New York JFK route to both airports in S17. American (daily Philadelphia and JFK services), Virgin Atlantic Airways (twice-weekly Orlando) and Thomson Airways (Orlando Sanford) will perhaps have less to fear from Norwegian’s incursion into this market at this initial stage.

The introduction of Norwegian into the Ireland-US market pair is likely to be less disruptive than the situation in Scotland. The LCC’s 3,591 weekly seats will add just 7% more seats to the US this summer. Prior to Norwegian’s arrival in Ireland, Aer Lingus would have controlled 50% of weekly capacity to the US in S17. With the LCC’s plans now public knowledge, the oneworld carrier’s share drops to 47% of the expanded market size.

Cork will become the third Irish airport to have US services, joining Dublin and Shannon. In terms of US cities with an Irish route, this will rise from 12 to 14 as a result of Stewart and Providence airports being added when Norwegian begins its operations in July. Incidentally, this will increase to 15 on 1 September when Aer Lingus adds Miami to its US route network. 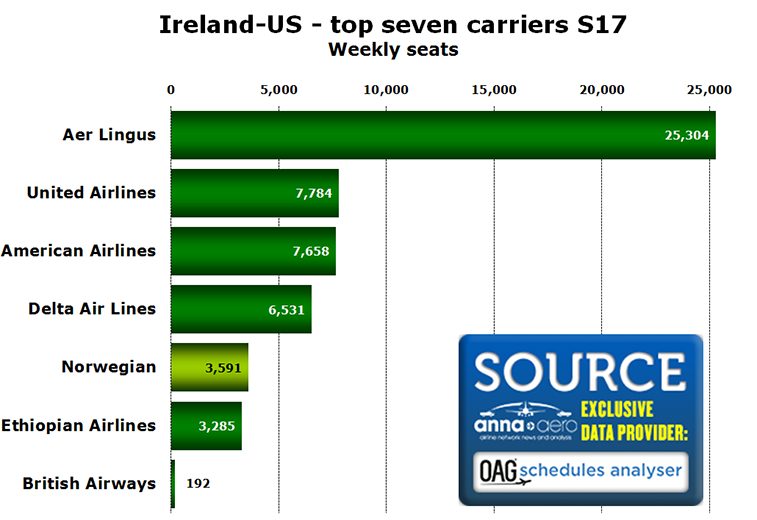 A brief review of the US-Northern Ireland market reveals that despite a £9m (€11m) rescue package to save United’s Newark to Belfast International service, the route, Northern Ireland’s only direct service to the US, was terminated in early January this year. So no doubt the arrival of Norwegian less than six months later will be some relief to the country’s busiest airport.

Norwegian already operates low-cost flights to eight US cities from London Gatwick – the addition of new routes to three smaller US airports offers even greater choice to passengers in other parts of the UK and Ireland. Whether the LCC’s other UK operations, Birmingham and Manchester, will also ultimately benefit from any low-cost long-haul operations from Norwegian is unclear at this stage, but rest-assured, you will hear it first from anna.aero. 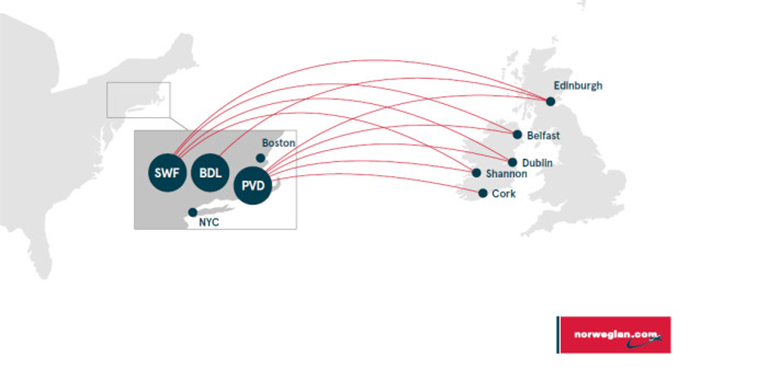 Operated by the LCC’s 737 MAX 8 aircraft, Norwegian’s logic in operating to these three particular US East Coast destinations is that these airports offer good access into the New York, Boston and New England areas but also offer significantly lower landing charges.