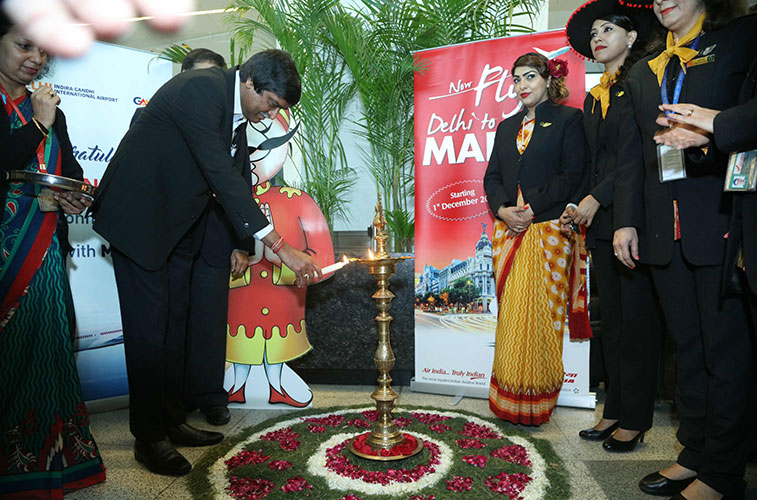 On 1 December 2016 Air India launched non-stop service between Delhi and Madrid. It was the Star Alliance carrier’s second new European route of 2016 having begun service to Vienna in Austria back in April. The new route to Spain operates three times weekly with 787-8s and faces no competition. It is the only non-stop service linking India and Spain.

The latest passenger statistics from the Airports Authority of India confirm that the country’s airports handled over 254 million passengers in 2016, an increase of 20% over 2015. This means that India moves into fifth place in the global rankings, overtaking Germany, and behind only the US, China, Japan and the UK. While the US and China are well out of reach, it is possible that India could overtake the UK (whose airports welcomed over 270 million passengers last year) either in 2017 or maybe 2018, and possibly catch Japan by 2020.

Leading the way among Indian airports was Delhi, which sailed past the 50 million passenger milestone in 2016 and finished the year handling 55.6 million passengers, an increase of 21% compared with 2015. Of the top 15 airports, 12 grew their passenger volumes by more than 15%, while two (Guwahati and Jaipur) saw growth of more than 30%. With passenger numbers at Bengaluru passing 22 million thanks to growth of 22.5%, local media have reported that there is now consideration being given to re-opening the city’s old airport, which was closed when the new airport opened in 2008. 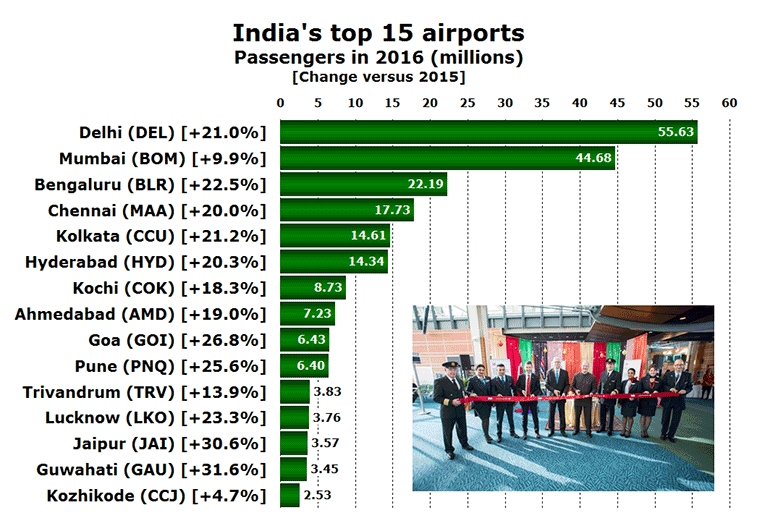 Domestic traffic up 20% every month since November 2015

Passenger numbers on domestic routes increased by more than 20% in every month of 2016. In fact the sequence of 20%-plus growth goes back to November 2015. The last time the country achieved such growth across every month was a decade earlier in 2006. 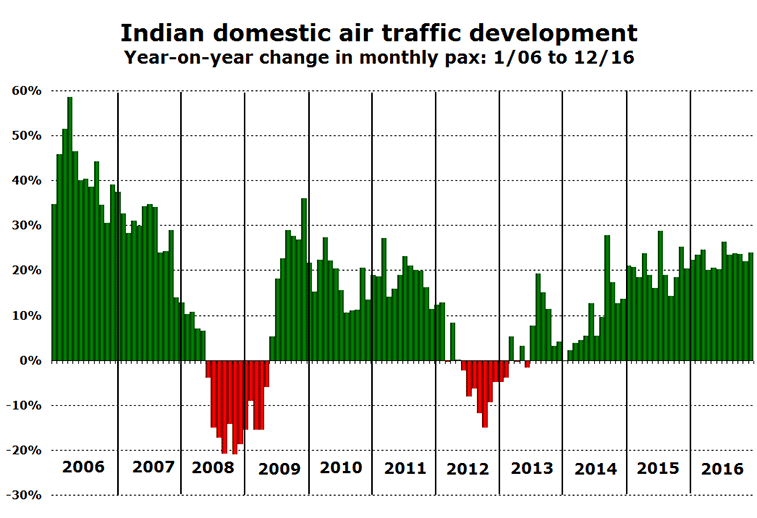 While most Indian airlines roughly maintained their market share of the domestic market across 2016, IndiGo continued to grow its share, reaching a record 42.6% in October, before falling back slightly to 40.3% in December. The airline’s increased share appears to have come at the expense primarily of Jet Airways, which saw its share of the domestic market fall from 18.7% in January to 15.3% in December, and Air India, which went from 16.0% to 14.0% during the same period.

The other leading players, SpiceJet and GoAir, both pretty much held steady with around 13% and 8% respectively. Relative newcomers AirAsia India and Vistara both gained a little ground, increasing their domestic shares from around 2% to 3%. 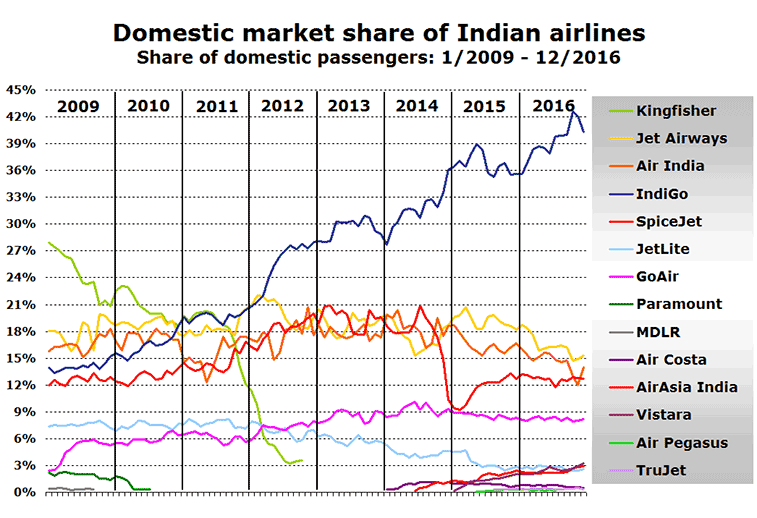 While domestic traffic has been the main driver of growth at India’s airports, the contribution of international services should not be overlooked. Although comprising only just over 20% of all traffic, passenger numbers on international services grew by 8.5% last year. While Delhi and Mumbai handle almost half of all the country’s international traffic, other airports are growing much faster, though from a much smaller base. In December, Varanasi (+38.6%), Chennai (+36.1%), Gaya (+32.9%), Amritsar (+32.6%) and Jaipur (+30.7%) all reported international traffic growth of more than 30%, well above the national average of 7.7%. 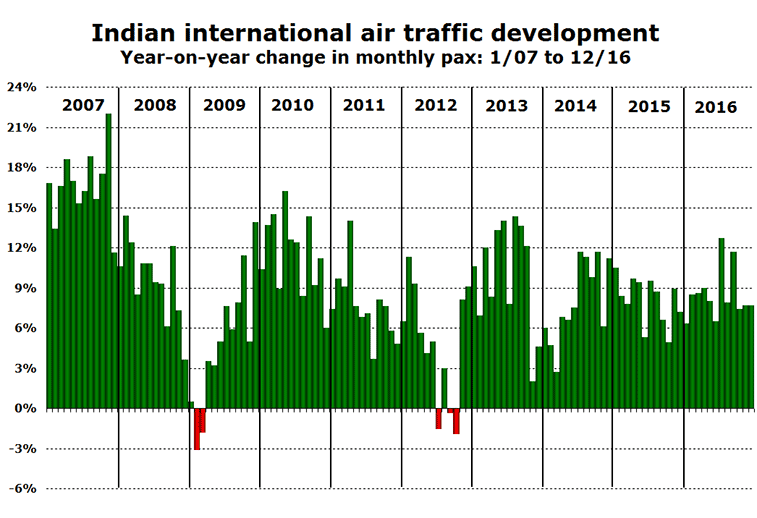 At present there are relatively few new international services starting soon from India’s airports. However, Brussels Airlines will start service to Mumbai from Brussels on 30 March (replacing the Jet Airways service which was dropped last year), while SpiceJet will link Delhi with Bangkok from 15 April. 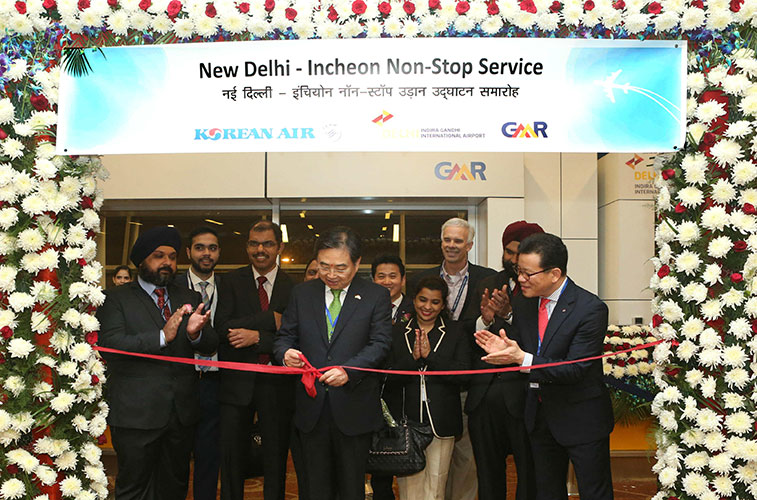 Korean Air launched its second service to India on 1 December 2016 when the SkyTeam member began non-stop service between Seoul Incheon and Delhi with five weekly flights. The carrier already serves Mumbai from the Korean capital with three times weekly flights.