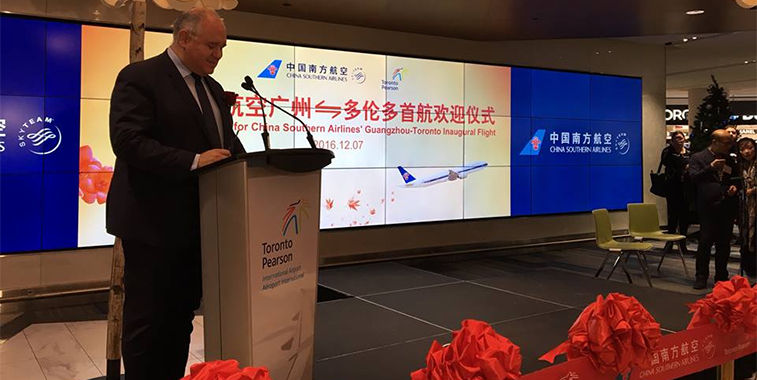 China Southern Airlines launched flights from Guangzhou to Toronto Pearson in December, helping contribute to the airport’s 8.0% growth in passenger traffic last year. Along with China Southern, another new carrier to Pearson in 2016 was WOW air which added flights from Reykjavik/Keflavik, a route that was already served by Icelandair and will be served by Air Canada Rouge from June.

Last year, Pearson welcomed just over 44.3 million passengers, up 8.0% when compared to the total of 2015. In 2012 the airport welcomed 34.9 million, meaning that traffic throughput at Pearson is 9.4 million greater than what it was four years ago. This represents a growth rate for Pearson during the past few years of 27%. 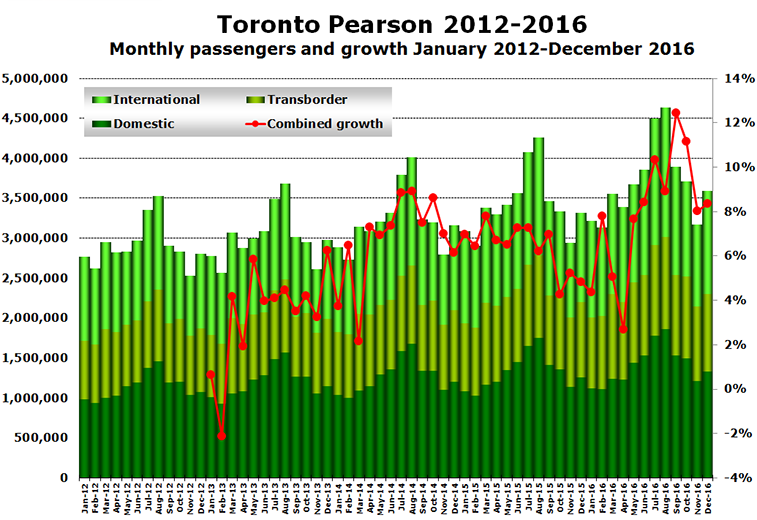 In 2013 traffic grew by 3.4% when compared to 2012, while 2014 results witnessed passenger throughput growth of 6.8%. In 2015 passenger numbers rose by 6.4%, while last year saw traffic increase by 8.0%. What can be seen is that even with increasing passenger numbers, the rate of growth has also surged.

Of the three markets (domestic, transborder and international) the fastest growing is international, with traffic in this sector growing by over 30% since 2012. Transborder is second, with traffic in this sector up by over 27%, while the domestic market has seen passenger numbers increase by nearly 24%. In 2016, 38% of traffic at Pearson was domestic, down one point from 39% back in 2012. However, the Canadian market from Pearson peaked in 2013, when it claimed a 40% passenger share. Transborder has maintained its 27% proportion of traffic during the past few years, while international has seen a 0.9% increase in its stake of traffic, with it welcoming just under 35% of Pearson passengers last year.

If we take Pearson’s 2016 traffic statistics and place them into anna.aero’s Seasonal Variation in Demand calculator (SVID), it performs well, generating a score of 1.85 – an “Excellent” rating. Although it is still an excellent rating, the airport’s score has increased from 1.53 in 2015, and 1.48 in 2014. What this shows is that although Pearson’s growth in recent years has been impressive, its operations are starting to become more seasonal.

Air Canada commands with 57% of seats

With it being its largest base, it is no surprise to see that Air Canada is the leading carrier at Pearson, commanding 57% of weekly seats this coming summer (including Rouge and Jazz operations). Its share of seats from Pearson has grown 0.8% during the past 12 months, while its own capacity has risen 9.0%. Following Canada’s flag carrier, WestJet is the airport’s second largest airline, with it holding a 19% share of seats this summer, down one point from S16. 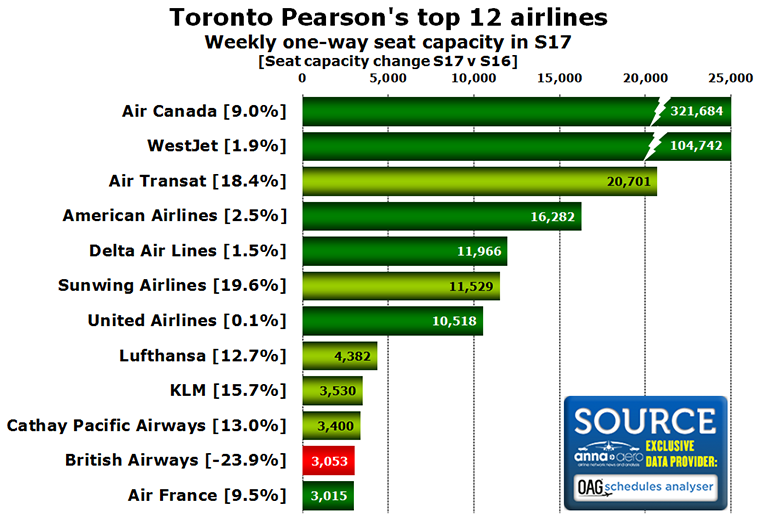 Of the airport’s top 12 airlines, only one (highlighted in red) has seen capacity cut, with British Airways reporting a 24% drop in seats. The result sees the UK carrier fall from being the eighth largest airline at Pearson last summer to 11th this year. Unlike BA, five airlines in the top 12 (highlighted in light green) have shown double-digit gains in seat capacity, with the remaining airlines showing slender growth. Recent airlines to join the airport’s line-up include WOW air, which launched flights from Reykjavik/Keflavik last May, and China Southern Airlines which added service from Guangzhou in December.

With its weekly seat capacity growing by 8.0%, Vancouver is confirmed as the number one route from Pearson, with the domestic link between Canada’s two largest airports accommodating 7.5% of weekly seat capacity from Pearson this summer. The connection is served by four carriers: Air Canada (67% of weekly seats in S17); WestJet (29%); Sunwing Airlines (3.4%) and Air Transat (0.5%). The route is also flown by Philippine Airlines as it offers a Manila – Vancouver – Pearson sector, however it does not have local traffic rights on the Vancouver – Pearson link (its seat capacity has therefore been excluded from the city pair data). 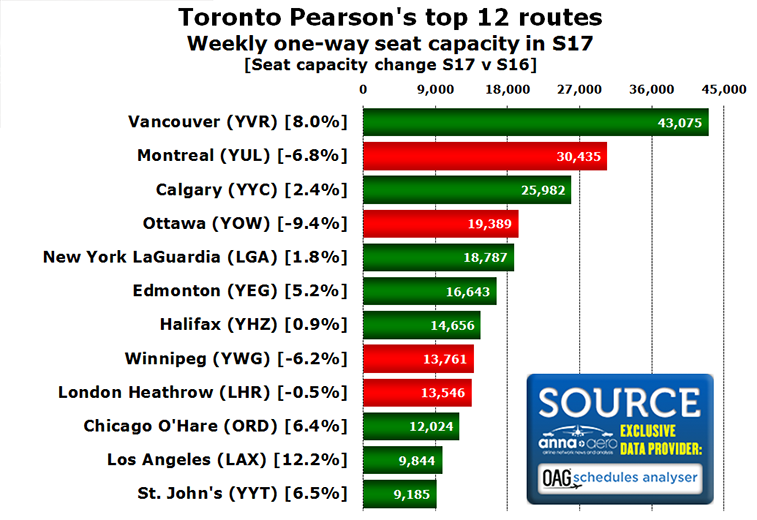 Of the airport’s top 12 routes, four (highlighted in red) have seen capacity cuts over the past 12 months (although summer schedules could still have further tweaks made). Of those above only four are not in Canada: New York LaGuardia, London Heathrow, Chicago O’Hare and Los Angeles, with Heathrow being the only long-haul service. Looking outside of the top 12, some routes that are showing strong growth for S17 include: Amsterdam (13th largest route; 24% growth in weekly seats); Atlanta (18th; 11%); Las Vegas (19th; 19%); Quebec (20th; 20%); Dublin (22nd; 36%); Cancún (26th; 14%); Miami (29th; 27%); Lisbon (38th; 136%); and Sudbury (49th; 128%). The latter two have seen substantial growth due to TAP Portugal (starting 10 June 2017) and WestJet inaugurating services on the routes respectively, whereas the remaining city pairs have seen growth from existing airlines.

Overall in S17 Pearson will be connected to 172 destinations (looking at w/c 13 June 2017), four more than in S16. When referring to OAG schedules, routes to Charlottetown and San Juan have been dropped. Looking ahead at new routes, Berlin Tegel is the leading destination, with the connection to the German capital (planned to launch 1 June with Air Canada Rouge), jumping straight into 113th on the destinations ranking when considering weekly seats. It sits ahead of China Southern’s route from Guangzhou, which launched in December, which is placed 121st. Air Canada Rouge will also add Reykjavik/Keflavik flights in summer, the only other planned new route to Europe from Pearson for the airline.

Along with these new routes, one of the biggest that will launch this summer is Air Canada’s connection to Mumbai. Starting on 1 July, the route, at 12,488 kilometres, will be the second longest sector flown from Pearson, with it just sitting behind Hong Kong which is 12,545 kilometres from Toronto. Air Canada will operate flights to Mumbai, its second link to India after Delhi, on its 787-9s, with an initial four times weekly service. 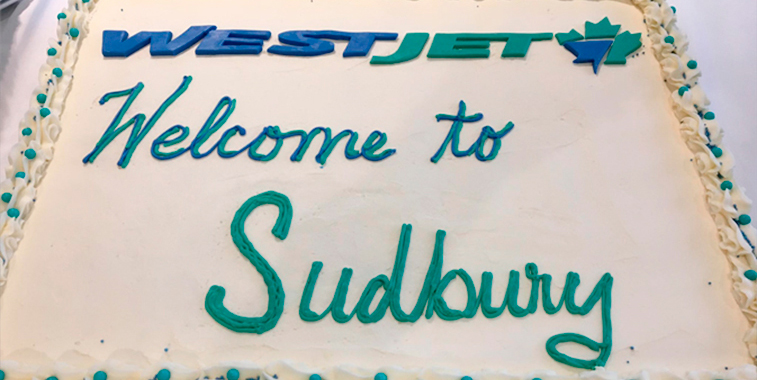 WestJet commenced flights between Toronto Pearson and Sudbury on 3 February. As a result of the carrier joining Air Canada on the route, it has resulted in seat capacity to Sudbury from Pearson growing by 128%, making it one of the fastest growing routes from Canada’s biggest airport this summer.