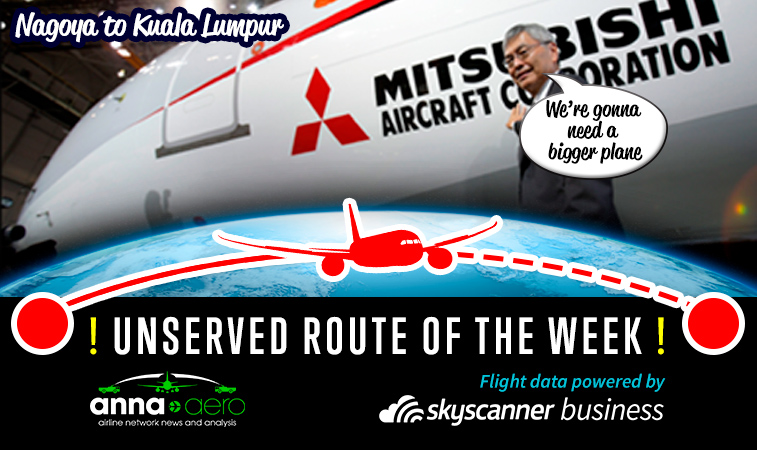 Mitsubishi chief, Hideaki Omiya, unveils the MRJ at the giant’s Nagoya plant. Launch customer All Nippon Airways will receive the first units in 2020. The 70-90 seater produces amazingly low seat mile costs, but it’s way too small to operate from the massive industrial city of Nagoya (also home to Toyota, Honda etc) to Kuala Lumpur, which Skyscanner reveals is a route in much demand at both ends.

With over 128,000 searches in the last year, a potential new route from Nagoya to Kuala Lumpur (KL) has been identified as this week’s “Skyscanner for Business-anna.aero Unserved Route of Week” – a powerful analysis based on aspirational data captured from the Skyscanner.net flight comparison site used by +60 million unique visitors per month. 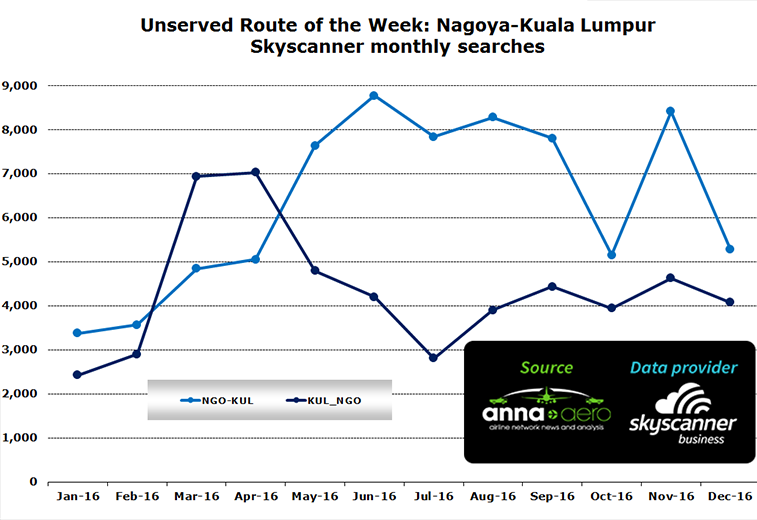 anna.aero wants JAL or AirAsia X to start this route

Skyscanner demand on this week’s unserved route shows a bias towards the Japanese end of the city pair, with a 59/41 split, so on this basis we looked at potential carriers at the Nagoya end first. The airport is dominated by All Nippon Airways (ANA), with the Star Alliance carrier commanding 26% of weekly seats according to OAG data for the week commencing 28 February. It should be noted that the share of capacity at Nagoya for ANA, and the #2 carrier Japan Airlines (JAL) with 11% of weekly seats, both increase significantly when all partners and subsidiaries are also included in their respective weekly capacity.

Returning to ANA, it currently offers just two international services from Nagoya, its seventh largest base in terms of weekly seats – namely to Hong Kong and Shanghai Pudong (both flown daily). The airline does have experience in flying to Kuala Lumpur, as it presently flies daily to the Malaysian capital from both Tokyo airports, Haneda and Narita. A new route from Nagoya to Kuala Lumpur would have to join the queue of ANA’s bigger bases, as both Okinawa and Fukuoka (#4 and #5 in size respectively) are without a connection to KL. Its second largest base, at Osaka Itami, also offers no Kuala Lumpur services, but it is predominantly a domestic airport, while its third largest base, at Sapporo Chitose, already has AirAsia X offering KL services fives times weekly.

Mainline JAL has a far more international presence at Nagoya than its arch rival, with five of its eight routes from the airport (its joint eighth largest in terms of weekly frequencies – along with Sendai and Okinawa) being overseas. All of the international sectors – to Bangkok Suvarnabhumi, Honolulu, Shanghai Pudong, Taipei Taoyuan and Tianjin – are currently flown daily. Appraising its network, Kuala Lumpur would be a logical expansion of JAL’s international offer from Nagoya, complementing its existing daily service from Narita. The #3 carrier at Nagoya is Jetstar Japan, its six-destination network at the airport sees the airline provide rotations to two international destinations – Taoyuan and Manila. On this basis, the LCC could also be a solution for the potential Nagoya to Kuala Lumpur link.

Considering the Malaysian end of the route, the potential carriers at Kuala Lumpur were contemplated next. Native LCC AirAsia is the largest airline at the airport, with 32% of weekly seats, ahead of its nearest rival, Malaysia Airlines, with 25%. The #1 carrier currently serves 65 destinations from its biggest hub, but unfortunately none in Japan. Daughter airline AirAsia X is therefore perhaps a better proposition from within the group to fly a Nagoya sector, operating as it does to Osaka Kansai (10 times weekly), Haneda (daily) and Chitose (five). Malaysia Airlines also flies to Japan from Kuala Lumpur, offering routes to Narita (10 times weekly) as well as Kansai (daily). As a result of this analysis, an airline to serve this potential sector has a good chance being from either end of the route given the present market conditions.

When looking at the previous year of search data, the busiest month for potential traffic flows (for both directions on the route combined) is November 2016, with over 13,000 searches, over 7,200 higher than the lowest monthly figure, which was recorded in February 2016 (6,500 searches). The seasonality profile of this search data is more extreme than the last Unserved Route of the Week (Nassau to Los Angeles) with the low-month traffic representing 45% of the highest month. According to OAG Traffic Analyser, because there is no direct service, the top three connecting options chosen by those passengers who did book travel between Nagoya and Kuala Lumpur in the past year indicates that the majority of connecting travellers used Hong Kong (21%), Singapore (20%) and Narita (19%). In the opposite direction traffic flows are slightly different, albeit with Hong Kong still #1 (22%), but Narita (21%) nips ahead of Singapore (16%) this time to secure second spot.

Indeed, an O&D that is not served by a non-stop flight will typically display a low purchase rate and low traffic. In this instance Skyscanner’s Travel Insight indicates a monthly average of 6.9% for the Nagoya to Kuala Lumpur route (see graph below). Therefore, if there was a Nagoya to Kuala Lumpur route, and if bookings performed in line with the “Skyscanner market average” for direct services at both airports (7.2%), the airline operating this route could immediately expect an improved purchase rate of 4.3%, without any increased marketing spend. However, with nearly 130,000 annual searches a four or five times weekly service should be immediately viable for the airline selecting to start this potential city pair. 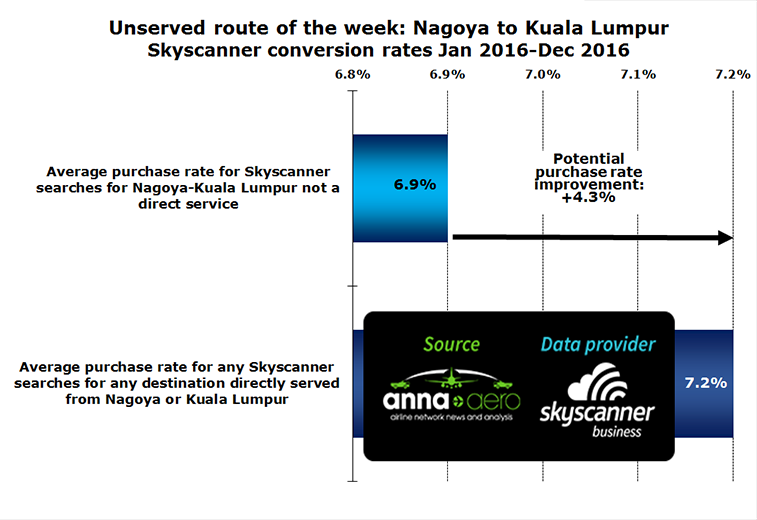