Tunisair’s starting to see traffic resurgence after years of decline; France remains carrier’s strongest market as others start to stabilise 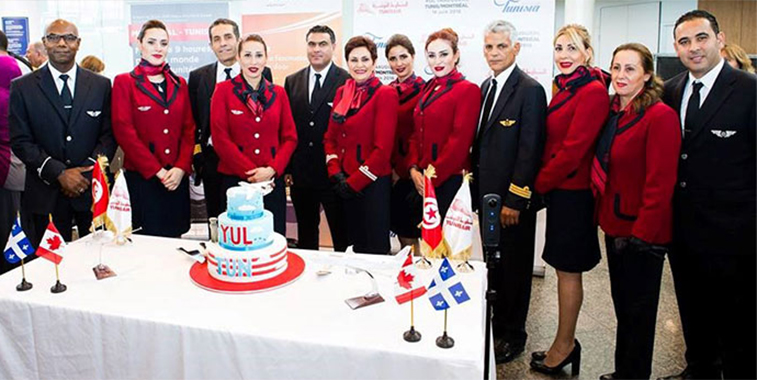 Tunisair launched flights to Montreal in 2016, becoming the airline’s only transatlantic service. Canada was one of five new markets to be flown to by the carrier last year, while a further five were dropped.

Between January and August last year (the last data available on airline’s website), Tunisair carried just over two million passengers. When we compare that eight-month period with the same one in 2015, traffic has grown 7.5% from just under 1.89 million. With this traffic increase, 2016 is shaping up to be the first year since 2012 where passenger numbers have grown, with statistics from the airline’s website showing that it carried 20% more passengers in 2012 than the sum transported in 2011. 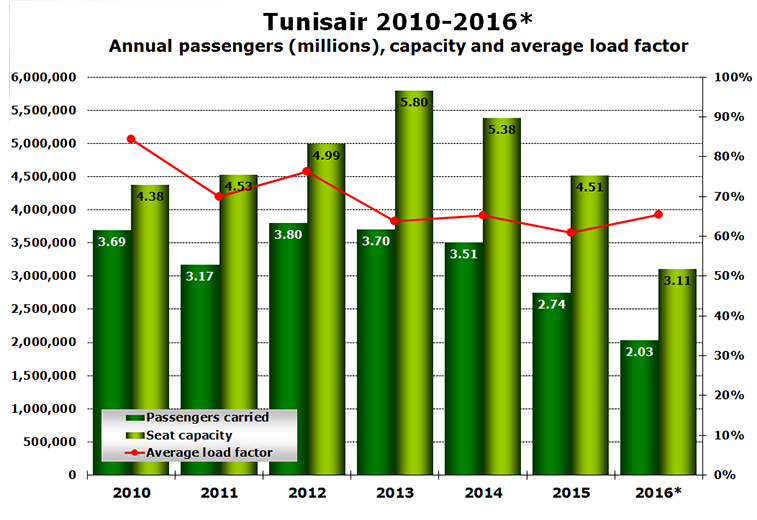 However between 2012 and the start of 2016, the airline has not been doing so well, with annual traffic dropping from 3.80 million to 2.74 million. This represents a fall of 28% for the airline in that period. However, as already stated, the outlook for the carrier in 2016 is different to that experienced in recent years, and if the average growth rate for the first eight months of the year is continued throughout the remainder of 2016, the airline will have carried around 2.95 million passengers, a result still below the total carried in 2014.

Looking at the average load factor for the airline since the turn of the decade, it has dropped from 84% in 2010 to 61% in 2015. This 23-point drop is worrying when understanding that airline’s seat capacity grew 3.1% in those five years, despite fluctuations during the years in between. That said the average load factor for the first eight months of 2016 has risen to 65%.

External impacts have played there part

Unfortunately for Tunisair, external factors in its home nation have not helped the carrier. Between 2013 and the end of 2016, there have been five reported terrorist attacks in Tunisia, with four of those happening during the past two years. These troubled times can be seen in Tunisair’s passenger statistics, with traffic between 2014 and 2015 dropping by nearly 22%. However, Tunisair was not the only carrier to witness its operations impacted by these events. Between 2015 and 2016, OAG schedules show that 21 airlines pulled or temporarily suspended operations to Tunisia during the aftermath of these events, including the country’s fourth largest carrier at the time – Thomas Cook Airlines.

When looking at Tunisair’s operations across its home market, what is evident is that capacity has peaked and troughed at all of its home airports, showing that the external factors are affecting all markets (leisure, business and VFR). The biggest impact on its operations has been from Enfidha, an airport which opened in 2009 to serve primarily as a gateway to the tourist resorts in the northern areas of the country. Tunisair cut seat capacity to the airport in 2015 by 49%, while last year it made a further cull, reducing capacity by another 41%. These reductions come on the back of a year (2013) when it grew seat capacity from Enfidha by 142%. 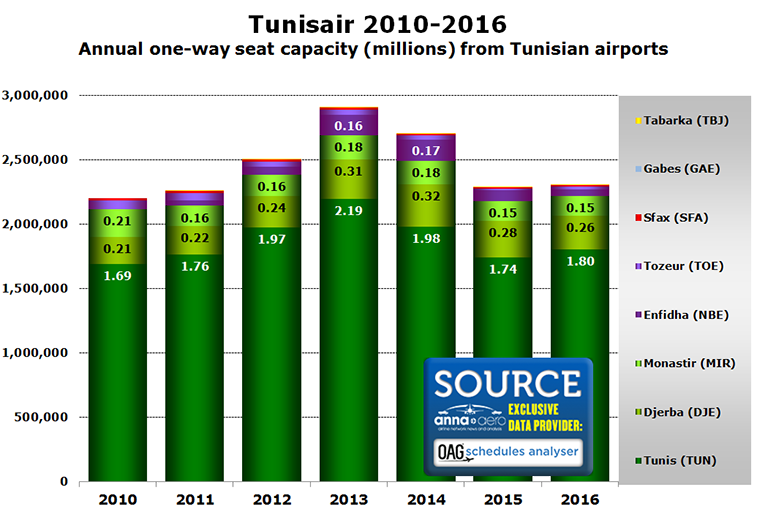 In 2015, the year in which three terrorist attacks took place, Tunisair cut capacity from all of its airports in Tunisia. Tozeur, a city in south-west Tunisia, witnessed the biggest drop, with capacity going down by 66%. The least effected was Tunis, the airline’s largest operation with 78% of all departing seat capacity, with it experiencing a 12% fall in seats. The airport serving the capital of Tunisia has fared better in 2016, with Tunisair increasing capacity from Tunis by 3.5% year-on-year.

Tunisair served 32 country markets in 2016, the same number that it served in 2015. The airline gained links to Canada, Russia (served in 2014), Niger, Rwanda and Iraq (served in 2014), however the UAE, Libya, Ireland, Slovakia and Kuwait have been dropped when referring to OAG schedules. Of the airline’s top 12 country markets, five have seen capacity cut between 2016 and 2015, however this is a better result than the seven that saw declines the year before. 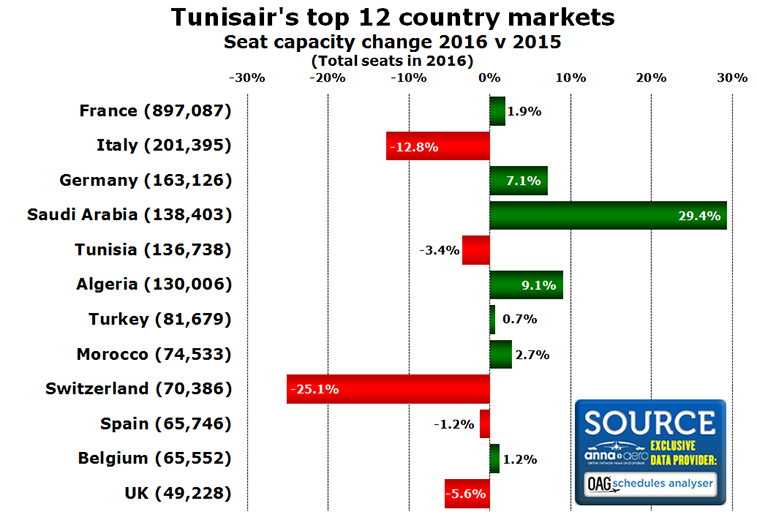 France, the leading country market for Tunisair, was one of the few nation’s the year before last to see capacity with Tunisair rise (up 2.1% in 2015), while Italy (-3.2% in 2015), Germany (-23%), Tunisia (-4.0%), Switzerland (-16%), Spain (-1.4%), Belgium (-40%) and UK (-2.4%) all saw cuts. Of those to witness declines in 2015, five continued to see falling capacity with the carrier last year. However with fewer markets seeing cuts, and certain markets steadily rising, it seems that Tunisair could see a more positive year in 2017, with regards to growth and stability. Nonetheless, it is hard to predict what further external factors could alter the airline’s return to growth. 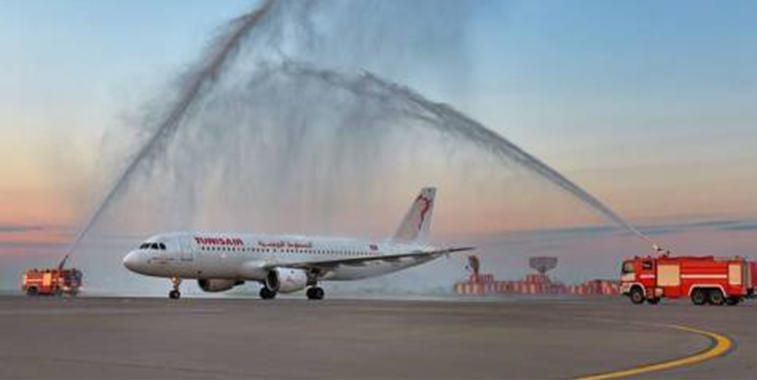 Tunisair returned to Russia in June 2016 with flights between Enfidha, Monastir and Moscow Sheremetyevo, with the route being welcomed with a water arch salute. Along with Russia, Canada, Niger, Rwanda and Iraq joined Tunisair’s route map last year according to OAG schedules.