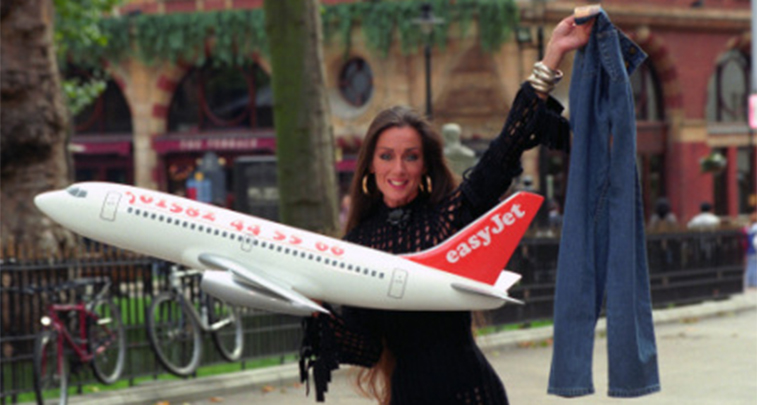 In 1995 easyJet launched, with its first base being London Luton Airport, where it offered routes to Glasgow and Edinburgh for the same price as a pair of jeans. Today, some flights from the London airport are still cheaper than a pair of jeans, however the average ticket price for this summer is above the average price of a pair of slick denims.

In 1995, a small low-cost carrier called easyJet was launched, offering flights from London Luton to Glasgow and Edinburgh for the same price as a pair of jeans. 21 years later and the carrier is now the second largest LCC in Europe behind Ryanair, flying over 74.4 million passengers a year. Luton is easyJet’s second largest operation in the UK capital after London Gatwick. This summer Luton occupies 24% of the carrier’s weekly seat capacity from London, with Gatwick holding the majority at 64%. London Stansted is third with 9.4% of weekly seat capacity, while London Southend is fourth with 3.0%. In S17 easyJet is the largest of the 10 scheduled airlines serving Luton, occupying 41% of monthly seat capacity. It sits ahead of Wizz Air (32% of monthly seats) and Ryanair (9.5%).

Last year easyJet had over 30 million seats on offer from London. When we compare that to 2007, seat capacity has grown by 52% at the carrier. Up until 2008, Luton was easyJet’s largest operation from the UK capital, with the north-west London airport occupying 0.3% more seat capacity than Gatwick in 2007. However a year later, Gatwick overtook Luton. The former saw a 44% rise in seat capacity in 2008, while Luton faced a 4.2% cut. 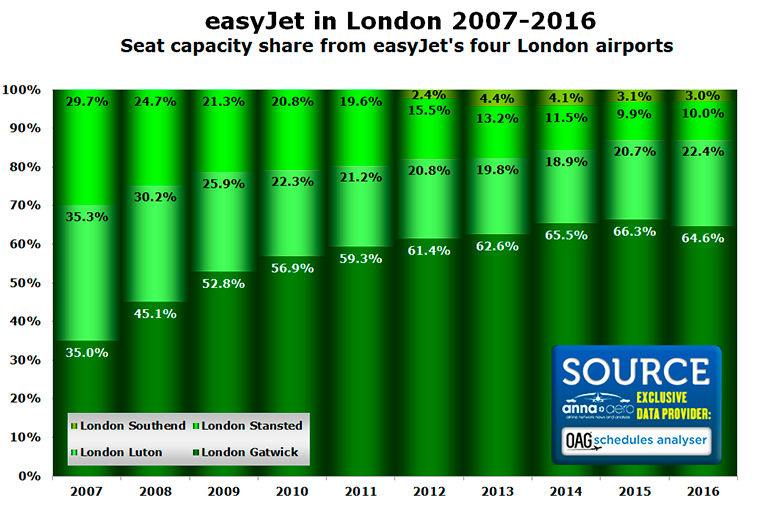 However, during the past two years, Luton has been easyJet’s fastest growing London airport. In 2016 the carrier increased its seat capacity from Luton by nearly 14%, while Gatwick only welcomed a 2.3% rise. Stansted was easyJet’s second fastest growing London airport in 2016, with it seeing a 6.0% growth in seats, while Southend saw only 0.3% more (approximately 3,000 seats). In 2015, Luton welcomed 14% growth from easyJet as well, while Gatwick was second (5.4% increase in seats). As can be seen above in the chart, although Luton is easyJet’s fastest growing London airport, its share of seats from London is still 13 points lower than its 2007 share. Nonetheless, in 2016 Luton had its highest share of seat capacity from London since 2009.

Back in 2007, easyJet was offering 7.09 million annual seats from Luton. When we compare that to the 6.96 million on offer last year, it shows that the airline’s operations from Luton are still 3.2% smaller than the total it achieved a decade ago. 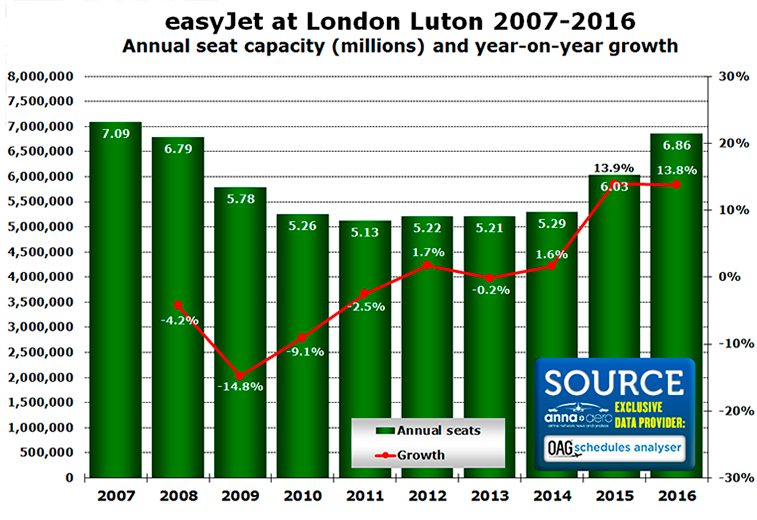 While easyJet has not yet finalised its W17/18 schedule, it is hard to see at the moment for certain how much the carrier will grow from Luton this year. For S17 the carrier’s seat capacity from the airport has risen by nearly 13%, highlighting that it is indeed focusing on enhancing its network from the north-west London airport. If this level of growth is averaged for all of this year, then in 2017 easyJet should add about 860,000 seats from Luton, which would take it to a total of over 7.6 million annual seats.

While Amsterdam remains the number one route from Luton for easyJet (same as S16), it is Copenhagen which has taken the biggest hit in the past 12 months, going from being the third largest route last summer to not being served at all in S17, with the airline’s final flight to the Danish capital planned to operate on 25 March. easyJet entered the Copenhagen market from Luton on 3 November 2014, starting off with an 11 times weekly frequency. However by the start of S15, Ryanair entered the route with a twice-daily connection. By the end of S15 easyJet increased its frequency to 19 times weekly, before going to 25 times weekly for the start of W15/16, while Ryanair retaliated a few weeks later by increasing its frequency to four times daily. The result was that in the space of 12 months, Luton had gone from having no Copenhagen connection to 53 weekly flights. With such a surge in capacity, there was surely going to be a casualty on the route, with easyJet being the victim. This summer easyJet will be serving a total of 59 routes from Luton on 485 weekly flights. When referring to OAG schedules, in S17 easyJet has between 19-21 aircraft stationed at Luton. 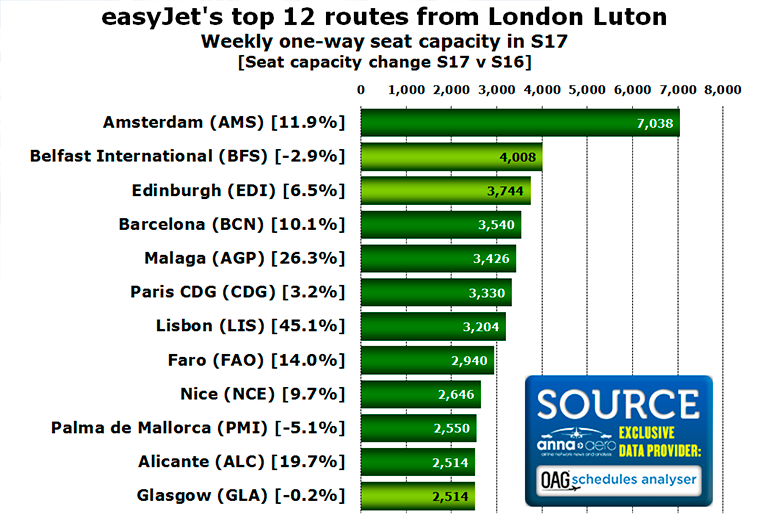 Of easyJet’s top 12 routes from Luton, three (highlighted in light green) are domestic connections. Of the seven routes which the airline was operating from Luton at the end of 1996 – Aberdeen; Amsterdam; Barcelona; Edinburgh; Glasgow; Inverness; and Nice – five of them (excluding Aberdeen and Inverness) are in the top 12, with Amsterdam, Belfast International, Edinburgh and Barcelona making up the top four. Looking back through anna.aero’s databases, easyJet has operated the following routes from Luton but have been subsequently dropped: Athens; Belfast City; Bremen; Bratislava; Cagliari; Krakow; Liverpool; Rijeka; Rimini; Istanbul Sabiha Gökçen; Sharm El Sheikh; and Warsaw Chopin. For 2017, easyJet has planned the following new routes from Luton: Biarritz; Isle of Man; Rhodes; Stockholm Arlanda; and Zadar in Croatia.

Some flights still cheaper than jeans…

When easyJet was launched some 21 and a half years ago, one of its main premises was that you could purchase a one-way ticket for the same price as a pair of jeans. At the time the carrier was offering flights to Scotland for £19.99, around the same cost at the time as a pair of fresh denims. With inflation, an average pair of jeans in the UK today now costs around £40.00. In time, easyJet’s average sector length from Luton has risen from 799 kilometres in 1996 (seven routes) to 1,175 kilometres in 2017 (59 routes). Looking at the fares from Luton with easyJet this June, anna.aero has searched through the airline’s booking engine and the average price for a flight during the last week of that month is £58.94. While there are many fares still available below this price, including Essaouira in Morocco (£30.49 one-way), routes that have increased easyJet’s average fare include long sectors such as Bodrum (£91.99), Heraklion (£81.99), Paphos (£147.49), Mykonos (£122.49), Tel Aviv (£179.74) and Zadar (£145.49). So while there are still some flights to be had for the same price as a pair of jeans, easyJet’s average fare from Luton this summer is now higher than a nice pair of swanky denims, with longer average sector lengths being a contributory factor towards this increase. easyJet route map 1996 and 2017. By the end of 1996, easyJet was serving seven routes from Luton (four domestic and three international), this summer the airline will be operating 59 routes from Luton, including sectors to Biarritz, Isle of Man, Rhodes, Stockholm Arlanda and Zadar in Croatia which have been added to the S17 timetable.