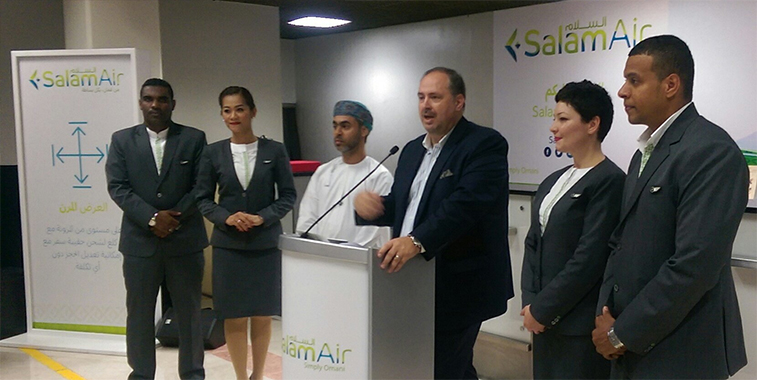 SalamAir launched flights to Dubai Al Maktoum on 28 February, a route it will operate twice-daily. Seen speaking at the inaugural flight ceremony is François Bouteiller, CEO of the carrier, flanked by Khalid al Yahmadi, SalamAir Chairman. From 26 March, the route will move to Dubai’s main airport where it will face direct competition from four carriers.

SalamAir is Oman’s first LCC and it currently has a fleet of two A320s, with a third expected to join soon. What is interesting is that although the carrier is Oman’s first LCC, it is also only the nation’s second home-grown carrier, with the other being Oman Air. It commenced operations with a route between Muscat, its home base, and Salalah on the East Coast of Oman on 30 January, while services to Dubai Al Maktoum commenced last week on 28 February. While its services to the latter airport face no direct competition at the moment, when the route moves to Dubai’s main airport on 26 March, the carrier will go head-to-head with Oman Air (seven times daily), flydubai (six times daily) and Emirates (three times daily), while SWISS also operates daily between the two airports on a Zurich – Dubai – Muscat – Dubai – Zurich routing in which it does have local traffic rights between Dubai and Muscat. The airline’s Salalah connection goes head-to-head with Oman Air which offers 49 weekly flights, meaning that SalamAir is the first carrier to offer low-cost flights between the two airports.

Room for another destination with current schedule…

Looking at SalamAir’s schedule for its current two aircraft for the w/c 13 March, it is clear that there is room for another rotation in the day for its second aircraft. Currently the airline operates a twice-daily service to Dubai Al Maktoum and a three times daily link to Salalah on Oman’s East Coast. However, even with these high frequencies, there is room for a daily rotation to a third destination as seen below in the airline’s schedule (blocked out in dark grey).

Now, even with the morning rotation to Salalah varying from 08:35 to 07:30 on Tuesdays, Thursdays, Saturdays and Sundays, there is still time for the aircraft to offer a third daily rotation. With four days of the week seeing an earlier rotation, it could suggest that the airline would look to offer a choice of two destinations in this slot, one at a three times weekly and another at a four times weekly service. Given the current destinations and frequency that the carrier offers however, anna.aero’s data elves believe that only one destination will be placed in this slot, allowing for a daily rotation, with more to follow once the third A320 arrives into the airline’s fleet.

François Bouteiller, SalamAir CEO, said during the launch of flights to Dubai Al Maktoum this week: “With the aim of improving the network’s connectivity, we will be announcing multiple new destinations to and from Saudi Arabia and Pakistan in the coming weeks with the arrival of additional aircraft.” Looking at the two destinations which the airline currently serves, Salalah is 848 kilometres from Muscat, and Dubai 348, given an average sector length for the carrier of 598 kilometres at present and an average block time of 01:23.

Is Jeddah destination #3 for SalamAir?

One of the destinations tipped to be the carrier’s third link is Jeddah in Saudi Arabia, with many news sources in Oman confirming this. At a distance of 1,970 kilometres, this will significantly increase the average sector length for the carrier to 856 kilometres. Jeddah is already served by Oman Air which offers a four times daily service, while Saudi Arabian Airlines offers a twice-weekly rotation. Looking at schedules between Muscat and Jeddah for the two carriers, it currently has a block time of 03:40 for a one-way service on the route. With SalamAir’s current schedules indicating a turnaround time of between 40-55 minutes, it would mean that a Jeddah rotation would take at least 08:00 hours of flying out of the schedule, most certainly not enough time to fit in the 03:15 gap that the second A320 has at present. Nonetheless, the airline currently has a 01:40 turnaround time in Salalah on its morning rotation, so if another destination is to fit that gap, an hour could be taken off that turnaround time, thus allowing for a 04:15 slot. If we take two hours of this gap time to allow for turnarounds in Muscat and at the potential destination airport, that leaves just over one hour’s flying time each-way. This would allow the airline to operate to an airport about 350 kilometres away from Muscat. Destinations from Muscat within that reach include Abu Dhabi, Sharjah, Al Ain and Ras Al Khaimah in UAE, Chahbahar in Iran and Gwadar in Pakistan, a market that the airline’s CEO has hinted at serving. However, where the airline will serve next will be announced soon according to the airline, so keep your eyes peeled! 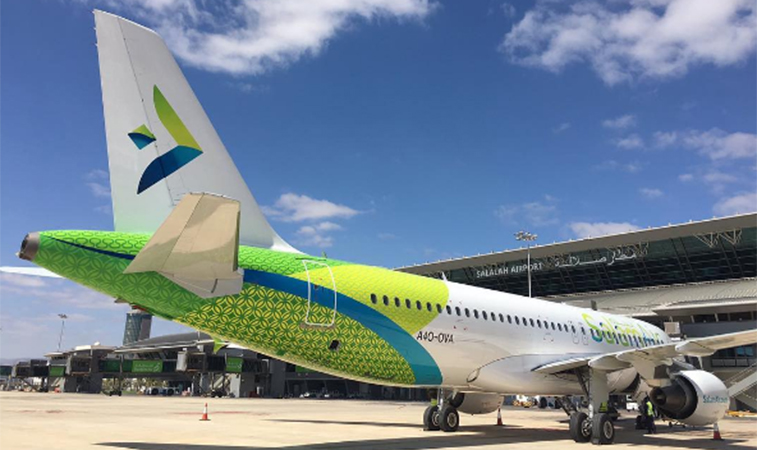 SalamAir launched operations in January with flights between Muscat and Salalah, with the first aircraft to join the fleet – PR MHI – seen here at the latter airport. The airline currently has a gap in its schedule for another sector of around 350 kilometres from Muscat, with one of those potential destinations being Gwadar in Pakistan, a market that the airline’s CEO has hinted at serving. 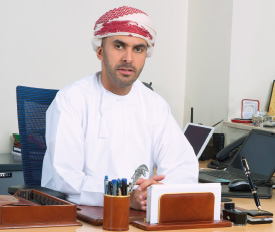 Aimen Ahmed Sultan Al Hosni, CEO of the Oman Airports Management Company is to welcome 1,500 visitors to an event in the region this December.