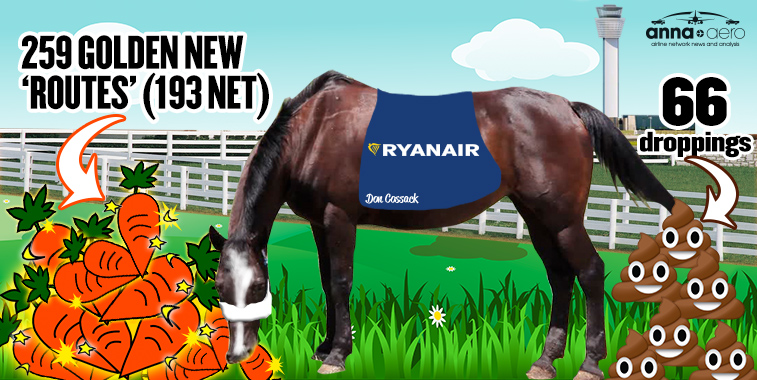 Neigh! Nope it’s right, Don Cossack has won nearly £1m (€1.2m) for its owner Michael O’Leary (also Ryanair’s CEO, not just a horse owner). However, this figure is perhaps just a fraction of the losses incurred on the 66 routes that the ULCC has dropped this year in comparison to S16. That figure would presumably buy Don Cossack a lot of carrots!

At present Europe has five major LCCs that anna.aero considers truly pan-European. These are easyJet, Norwegian, Ryanair, Vueling and Wizz Air. All of them carried over 20 million passengers in 2016 and have bases across several countries, not just in what might be considered their home markets. For simplicity we have dubbed them the PELOCO5 (Pan European LOw COst 5). Using the latest available schedule data for the summer season, in particular the first week of August, we have compared the networks of these carriers in 2016 and 2017.

Between them the PELOCO5 have ceased operations on almost 200 routes, while starting new services on well over 500 routes. Ryanair and Vueling have both stopped flying on over 60 routes, while easyJet and Wizz Air have each suspended fewer than 20 routes each, once you take out those routes that aren’t being operated because of runway maintenance work, notably at Targu Mures in Romania and Vilnius in Lithuania. Wizz Air has the best ratio of new routes to dropped routes (over 9:1) followed by easyJet (just over 5:1) and Ryanair (just under 4:1). Norwegian will have launched just over twice as many routes as it has dropped, while Vueling has actually dropped three times as many routes as it has added. In the rest of this analysis we take a closer look at those routes that have been dropped by these carriers. 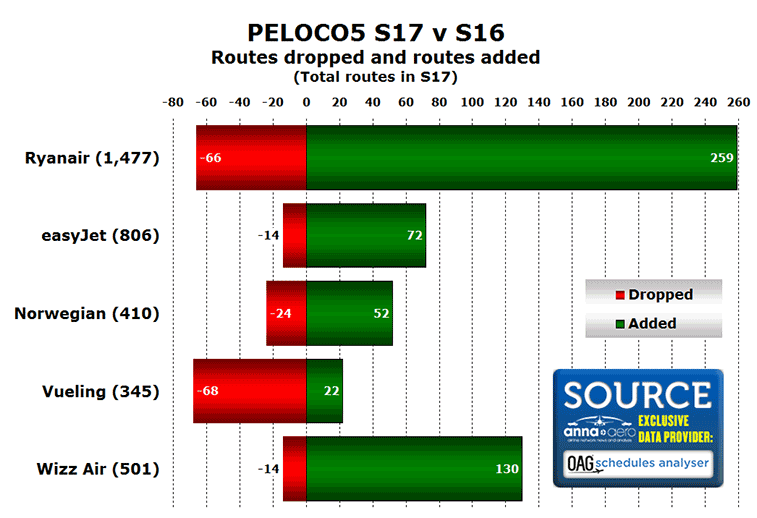 Ryanair: cuts all flights at Crotone, Kos and Oslo Rygge

Ryanair has actually dropped 81 routes but this includes 15 routes from Vilnius which have only been suspended temporarily because of runway maintenance work. Of the 66 genuine droppings, 23 are from Oslo Rygge in Norway. Ryanair decided to suspend all routes to that airport at the end of last summer partly as a consequence of the Norwegian government’s decision to introduce a new 80 Krone tax on 1 June 2016 on all passengers departing a Norwegian airport. Two other airports have seen a suspension of all Ryanair services since last summer; Kos in Greece has lost all eight of its routes, while Crotone in Italy has lost three.

That still leaves 32 dropped routes. However, some of these can be explained by a change of airport at one end of the route.

Of the remaining 20-plus dropped routes those with the highest weekly frequency last summer that are not in the schedule this summer (not including those that have seen a change of airport) are: Rome FCO to Lamezia Terme (served 14 times weekly in S16), Athens to Paphos, and London Stansted to City of Derry, the last two both served daily last summer. The Athens to Paphos route has apparently been terminated to make way for a new service from Paphos to Tel Aviv in Israel. Meanwhile the route between Stansted and City of Derry, which Ryanair stops at the end of March, will be taken over by bmi regional from the beginning of May, operating the twice-daily service under a PSO (Public Service Obligation) agreement.

Apart from Oslo Rygge and Kos, the airports to lose the most Ryanair routes this summer are London Stansted (six routes), Milan Bergamo, Paris Beauvais and Warsaw Modlin (each losing four routes), and Kaunas and Rome Fiumicino (both losing three routes). A total of 63 airports across Europe have lost at least one Ryanair route compared with last summer.

easyJet’s route churn is impressively low given the size of its network. Only 14 of the airline’s 750 routes operated last summer are not in the schedule this August. In fact, three of the 14 routes, though not operating in August will return either in September (London Gatwick to Tel Aviv, and Naples to Brussels) or October (Belfast International to Reykjavik/Keflavik). Of the 11 remaining dropped routes six were served with at least four weekly flights last summer:

The other five dropped routes are: Belfast International to Lanzarote, Bristol to Nantes (which ends somewhat curiously on 24 June), London Southend to Venice Marco Polo, Lyon to Pisa, and Toulouse to Pula.

Norwegian has discontinued 24 routes for this summer, not including two temporary route suspensions involving Vilnius. Just six of the dropped routes were served with at least three weekly flights last summer:

The other 18 routes were all served with just one or two flights per week last summer, including a couple of long-haul services; Bergen to New York JFK, Stockholm Arlanda to Las Vegas, and Copenhagen to Las Vegas. The two Las Vegas routes appear to end on 25 March according to the airline’s on-line booking tool. Trondheim has seen six S16 routes axed for this summer, while London Gatwick has lost five. Meanwhile, Berlin Schönefeld and Copenhagen have each said farewell this summer to three Norwegian services.

Vueling: dropped 21 routes from Barcelona since last summer; 68 in all

The Barcelona-based LCC had some well documented operational issues last summer which seem to have resulted in the airline’s management taking a more cautious approach to its network this summer. As a result, according to OAG data the airline will actually see its route count fall from 391 non-stop routes last August to 345 this August.

Of the 68 routes served last August but not this August, seven were served with at least five weekly frequencies:

The 68 dropped routes involve 136 airports (one at each end of the route). The airports involved in the most droppings are: Barcelona (21); Rome Fiumicino (seven); Brussels, Catania and Florence (five each); Bilbao, Ibiza and Palma de Mallorca (four each). In total, 73 airports have lost at least one Vueling route this August compared with the same month last year, based on analysis of currently available OAG data.

Wizz Air: just 14 routes dropped of which five from Sofia

With passenger numbers up 19% to 22.8 million in 2016, Wizz Air is the fastest-growing of the PELOCO5 in terms of percentage growth. It also has the best add-to-droppings ratio of almost 10:1 starting 130 new routes but suspending just 14. Five of the routes ended involved Sofia, two featured Poznan (to Glasgow and Milan Bergamo), while Bucharest (to Milan Malpensa), Budapest (to Istanbul Sabiha Gökçen), Cluj-Napoca (to Geneva), Debrecen (to Brussels Charleroi), Gdansk (to Malta), Prague (to Rome Ciampino) and Warsaw Chopin (to Dortmund) each lost a single Wizz Air service. Wizz Air’s Sofia to Frankfurt Hahn link will be replaced later this summer by its new Frankfurt route. Similarly the Rome Ciampino service has been replaced by a Rome Fiumicino service. On four of the routes dropped, Ryanair was competing head-to-head.