Orlando-Tokyo is “Skyscanner Unserved Route of the Week” with 260,000 annual searches; ANA’s tenth US route from Narita? 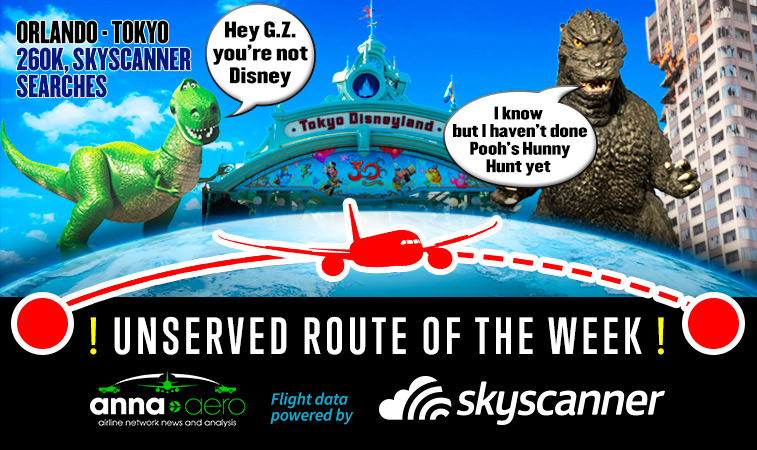 It might seem that there are 260,000 people in front of you when queuing at a Disney theme park, but there really was that number of people looking for a flight between Orlando and Tokyo last year…but ultimately they came away not having as pleasant an experience as they wanted because the route is unserved…again a bit like being at a theme park. Don’t even get me started on the prices for food and drink…

With over 260,000 searches in the last year, a potential new route from Orlando to Tokyo has been identified as this week’s “Skyscanner-anna.aero Unserved Route of Week” – a powerful analysis based on aspirational data captured from the Skyscanner.net flight comparison site used by +60 million unique visitors per month. 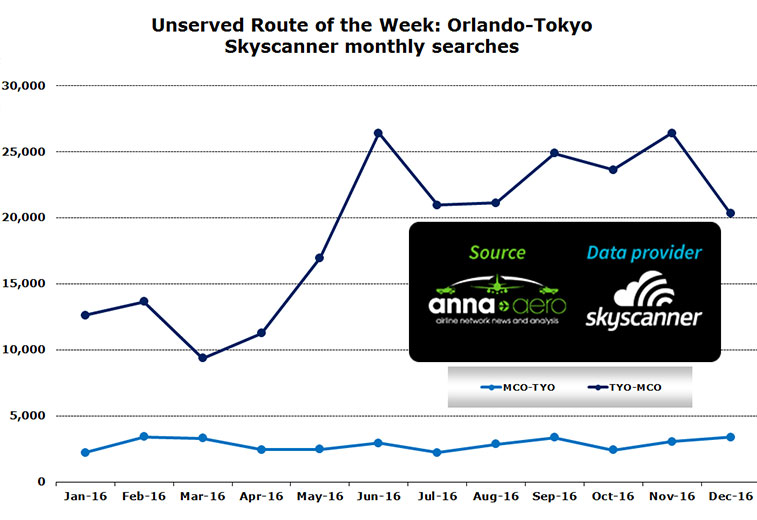 anna.aero wants ANA or JAL to jump onto this route

Skyscanner demand on this week’s unserved route shows a bias towards the Japanese end of the city pair, with an 87/13 split, so on this basis we looked at potential carriers at the Tokyo end first. Although, Tokyo Haneda is being increasingly opened up to international services, indeed it has non-stop services to seven US destinations, the majority of these points are also served from Tokyo Narita (the exceptions being Delta Air Lines’ daily Minneapolis-St. Paul flights and Hawaiian Airlines’ three times weekly service to Kona). The latter Tokyo airport maintains the majority of US capacity, offering 77% of weekly seats across its 17 non-stop destinations. On this basis our analysis on a potential route to Orlando focuses on it being launched from Narita.

The airport is not really dominated by one carrier, but All Nippon Airways (ANA) is the market leader, with the Star Alliance carrier commanding 16% of weekly seats according to OAG data for the week commencing 7 March. It should be noted that the share of capacity at Narita for ANA, and the #2 carrier Japan Airlines (JAL) with 13% of weekly seats, both increase significantly when all partners and subsidiaries are also included in their respective weekly capacity.

Returning to ANA, it currently offers nine US services from Narita, its sixth largest base in terms of weekly seats (after Haneda, Osaka Itami, Sapporo Chitose, Fukuoka and Okinawa) – namely to Honolulu (double-daily) Los Angeles, Houston Intercontinental, New York JFK, San Francisco, San Jose, Seattle-Tacoma, Washington Dulles and Chicago O’Hare (all flown daily). Florida is currently unserved by any airline from Japan, with the route furthest south and east in the US being Delta’s daily Atlanta-Narita operation. A new route from Orlando to Tokyo may have to wait until Miami is served before it is considered an option, however the Japanese market may well be more interested in what Orlando (Disney, theme parks etc.) has to offer rather than using flights to Florida’s busiest airport.

Mainline JAL has slightly less US market presence at Narita than its arch rival, with seven routes from the airport, but offering just 821 weekly seats less than ANA across these flights, based on a total market size of nearly 32,000 weekly seats. While many of the US sectors are the same as those offered by ANA, JAL does at least offer three unique airports – Dallas/Fort Worth, San Diego and Boston – so it may well consider an Orlando route as an opportunity to offer a fresh unserved connection. That said, the airline is moving some of its New York JFK capacity between Tokyo airports, starting a daily Haneda link on 1 April, but reducing its double-daily Narita service to just daily. On this basis, the oneworld carrier is clearly tweaking it US operations, so further expansion in the market and indeed a potential Orlando to Tokyo link could indeed be on the cards.

Contemplating the US end of the route, the potential carriers at Orlando were considered next. World’s biggest LCC Southwest Airlines is the largest carrier at the airport, with 27% of weekly seats, ahead of its nearest rival, Delta, with 14%. The #1 carrier currently serves 47 destinations from its eighth biggest hub, but unfortunately none in Japan, and only three are international – San Juan, Montego Bay and Aruba. The second largest airline is perhaps a slightly better proposition, operating as it does to destinations outside of the Caribbean, namely to Cancún (eight times weekly) and Sao Paulo Guarulhos (daily). However, as a result of this analysis, an airline to serve this potential sector is more likely to originate at the Japanese end of the airport pair.

When looking at the previous year of search data, the busiest month for potential traffic flows (for both directions on the route combined) is November 2016, with over 29,000 searches, nearly 17,000 higher than the lowest monthly figure, which was recorded in March 2016 (12,700 searches). The seasonality profile of this search data is slightly more extreme than the last Unserved Route of the Week (Nagoya to Kuala Lumpur) with the low-month traffic representing 43% of the highest month. According to OAG Traffic Analyser, because there is no direct service, the top three connecting options chosen by those passengers who did book travel between Orlando and Tokyo in the past year indicates that the majority of connecting travellers used Chicago O’Hare (20%), Dallas/Fort Worth (16%) and Houston Intercontinental (9.8%). In total, 37 different airports were used as transit hubs for traffic between these two points in 2016.

Indeed, an O&D that is not served by a non-stop flight will typically display a low purchase rate and low traffic. In this instance Skyscanner’s Travel Insight indicates a monthly average of 5.0% for the Orlando to Tokyo route (see graph below). Therefore, if there was a Orlando to Tokyo route, and if bookings performed in line with the “Skyscanner market average” for direct services at both airports (8.9%), the airline operating this route could immediately expect an improved purchase rate of 78%, without any increased marketing spend. However, with nearly 260,000 annual searches a daily service should be immediately viable for the airline selecting to start this potential city pair. 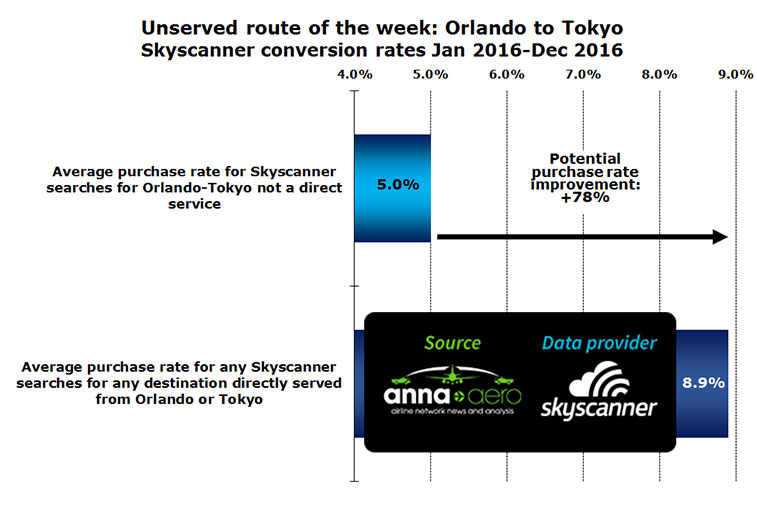