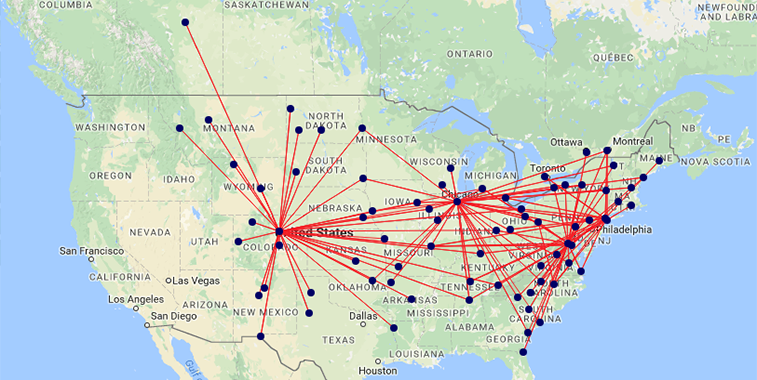 Trans States Airlines in S17 will operate to 61 airports across North America, stretching from Edmonton in Canada to Jacksonville in Florida. The airline’s top airports are Washington Dulles, Denver and Chicago O’Hare, shown visually in the carrier’s route map with the hub and spoke patterns appearing from those three cities. The airline also has based operations at New York’s JFK and LaGuardia airports.

Trans States Airlines, owned by Trans States Holdings, the same company which owns Compass Airlines and GoJet Airlines, is a carrier which operates under American Eagle and United Express for American Airlines and United Airlines respectively. Its main hubs for American are New York’s LaGuardia and JFK, along with Raleigh-Durham, while for United its main operations are Chicago O’Hare, Denver and Washington Dulles. Looking at OAG schedules for the carrier for S17, it will be operating 1,000 weekly flights across its network for both American and United (w/c 13 June 2017), equal to the amount of flights it operated in the same week last year. When referring to ch-aviation, it states that Trans States Airlines operates a fleet of 53 ERJ 145s. When launched, Trans States Airlines began its life as Resort Air, commencing operations in 1982 when it operated a handful of Metro IIs and carried just under 7,000 passengers a year. Since that time, the carrier has evolved and in 2015 it flew nearly three million passengers according to its website.

Washington Dulles is the largest of the 61 airports that Trans States Airlines will be serving in S17, with the Virginia airport occupying 17% of the carrier’s departing seat capacity. It is followed by Denver which has 9.4% of capacity along with Chicago O’Hare, with all three being hubs for United. Of the 61 airports Trans States Airlines operates to, four of them (Montreal, Toronto Pearson, Ottawa and Edmonton) are in Canada, with two present in the top 12 airports for the carrier. 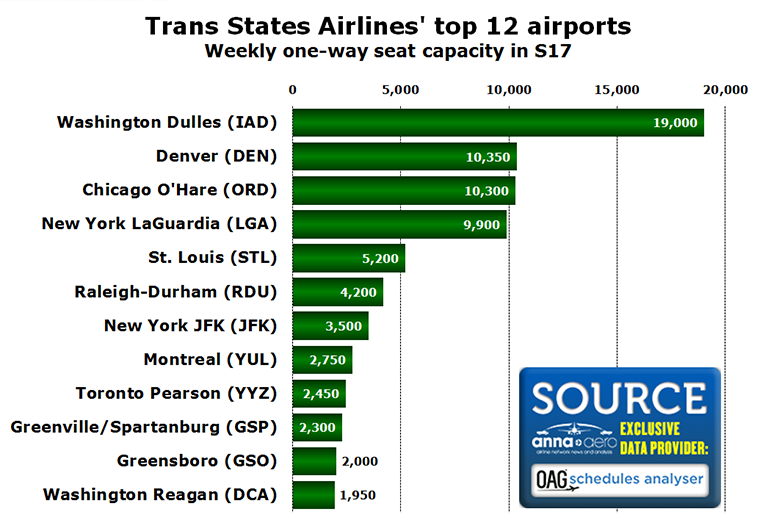 When referring to OAG schedules, Trans States Airlines’ fifth largest airport in S16 was Houston Intercontinental. However, this year it appears that the carrier is not serving the airport. Last summer the airline was operating 21 routes from the Texas hub, but it would appear that these services are now operated by Republic Airlines, which has seen its capacity grow 150% from Intercontinental during the past 12 months. As a result of no longer serving Intercontinental, capacity has shifty quite significantly at Trans States Airlines’ other hubs. Dulles has seen a capacity increase of 88%, Denver 29% and O’Hare 33%. In relation to the carrier’s New York hubs, LaGuardia has seen a 7% uplift in capacity, while JFK has seen an 11% rise in weekly seats. Raleigh-Durham has also seen a capacity surge, with Trans States Airlines’ seat capacity from the North Carolina airport up 87%. 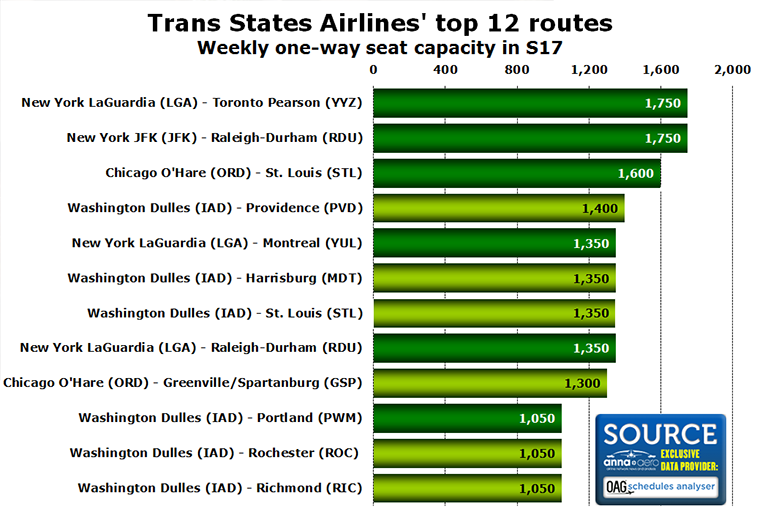 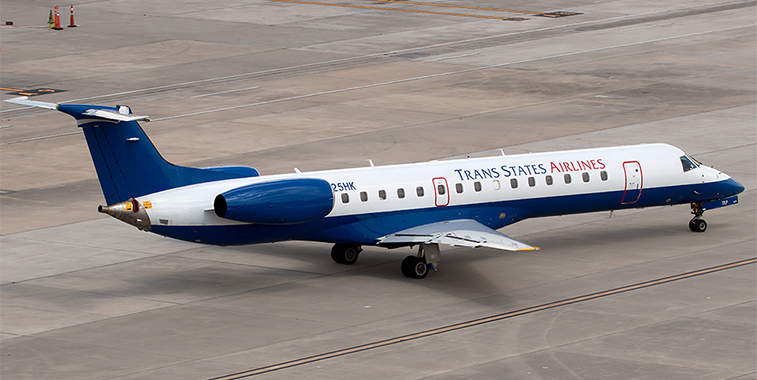 A Trans States Airlines-branded ERJ 145 is seen taxiing at Houston Intercontinental, an airport that it will not serve in S17 according to OAG schedules. The carrier does not operate flights under its own brand, but it has a fleet of 53 aircraft which fly on behalf of United Express and American Eagle.