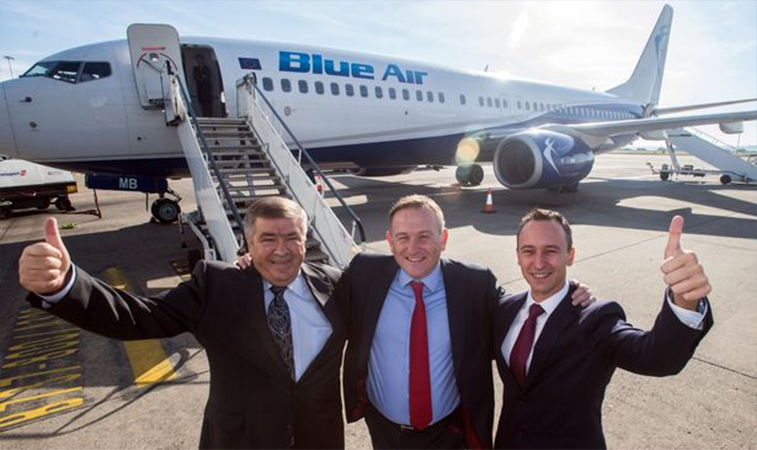 In October Blue Air announced Liverpool as its first UK base with flights to Alicante, Hamburg, Milan Bergamo and Rome Fiumicino starting from March. Seen supporting the airline’s new venture in Liverpool on the day of the base announcement are: Blue Air CEO Gheorghe Racaru; Liverpool Airport CEO Andrew Cornish; and Blue Air CCO Tudor Constantinescu. On 9 March the airline confirmed a fifth new connection for S17 from the airport – Larnaca – a sector it will begin in June. So far for S17 the airline has 32 new routes planned across its network, meaning that this year it will pass the 100-route milestone.

Blue Air is the airline to watch in Europe it seems for this summer. An analysis presented at CONNECT last month in Ajaccio by anna.aero’s Chief Analyst Ralph Anker revealed that Blue Air is the fastest growing carrier in Europe within the continent’s top 50 airlines, with it placing 42nd overall in terms of size (based on June 2017 data versus June 2016 data in OAG schedules). When we analysed Blue Air’s operations last summer, we revealed that it had added 14 airports and increased its weekly seat capacity by 43%. This year the airline has welcomed a further 10 airports to its summer network and has grown its weekly seats by 62%. Expansion surely is the carrier’s key objective, and for S17 the carrier has confirmed 32 new routes. Here is a list of the carrier’s new sectors for this upcoming summer season:

What is interesting to note is that the airline has one base which has not received any new sectors scheduled for S17, with the airline’s Bacau base seeing no new destinations.

Constanta base not in top 12 airports…

Of the airline’s eight bases one – Constanta (opening in June) – does not make it into the carrier’s top 12 airports for S17. The airline’s smallest base is its 17th largest airport this coming summer (with regards to weekly seats), sitting behind Dublin in 16th but ahead of Brussels in 18th. Other airports in the airline’s network that sit above Constanta are Stuttgart (13th), Paris Beauvais (14th) and Birmingham (15th). All of the airline’s other seven bases are shown in dark blue in the graph below. 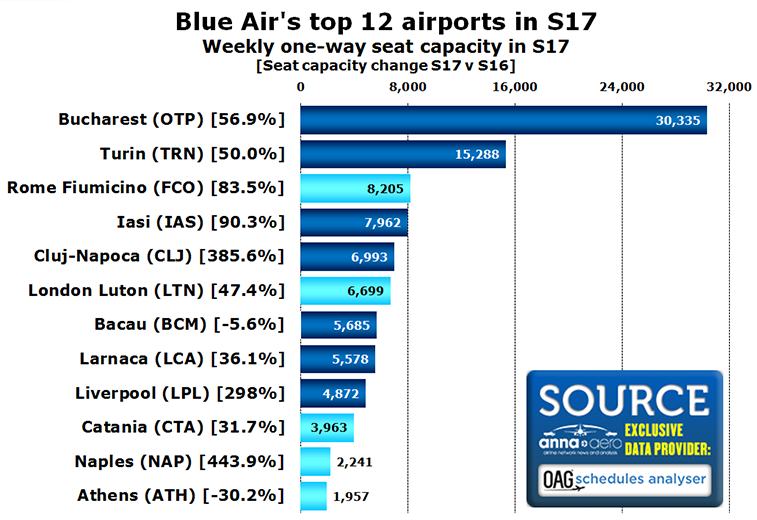 Although Liverpool (ninth largest airport in S17) is the carrier’s first UK base, it is not the airline’s largest operation in the country, with that title going to London Luton (sixth). With regards to destinations served, Liverpool (eight destinations) has the advantage over Luton (six). However, with the latter airport seeing 37 weekly flights from Blue Air in S17, it is ahead of Liverpool on this metric, which despite its based unit has only 29 weekly flights (figure includes new Larnaca flights). Along with Luton, Rome Fiumicino is another airport that has a larger operation than many of the airline’s bases.

For this summer Blue Air will add the following airports to its network: Alicante; Bordeaux; Copenhagen; Helsinki; Oradea (joined network on 16 December); Oslo Gardermoen; Pescara (3 October); Seville; Tel Aviv (8 January); and Timisoara (1 October). During the past year only one airport has been dropped from Blue Air’s network, with services between Turin and Menorca having ended on 29 September, a route it flew twice-weekly and only launched in June last year.

Blue Air’s leading route this summer is its three times daily service between Bucharest and Rome Fiumicino, a sector that last year only saw the carrier operating nine weekly flights. With its latest batch of announcements this week (Helsinki and Oslo), it means that Blue Air will pass the 100-route milestone this year, with 102 routes scheduled for the airline this coming summer. However, this figure could increase as schedules are still to be finalised. Of the airline’s top 12 routes, six of them are domestic connections (one Romanian and five Italian). 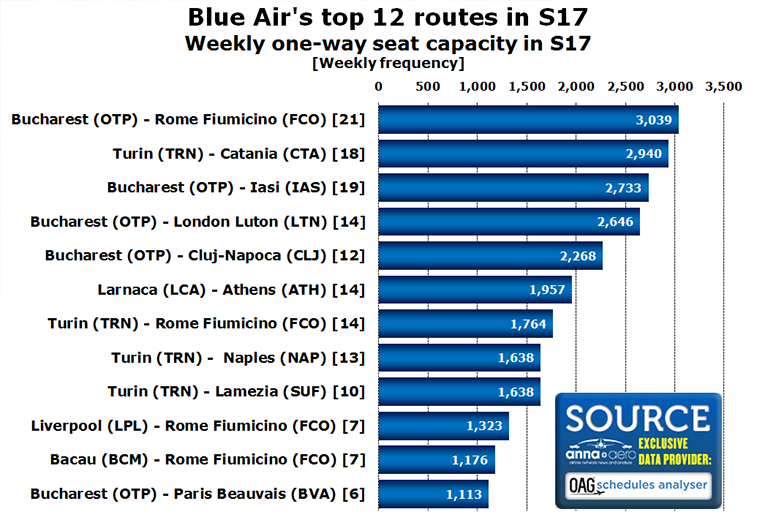 The airline’s leading new route for S17 is its daily connection between Liverpool and Rome Fiumicino. Launching end-March, it becomes the airline’s 10th largest route.

Bucharest sees 37% of based flight departures 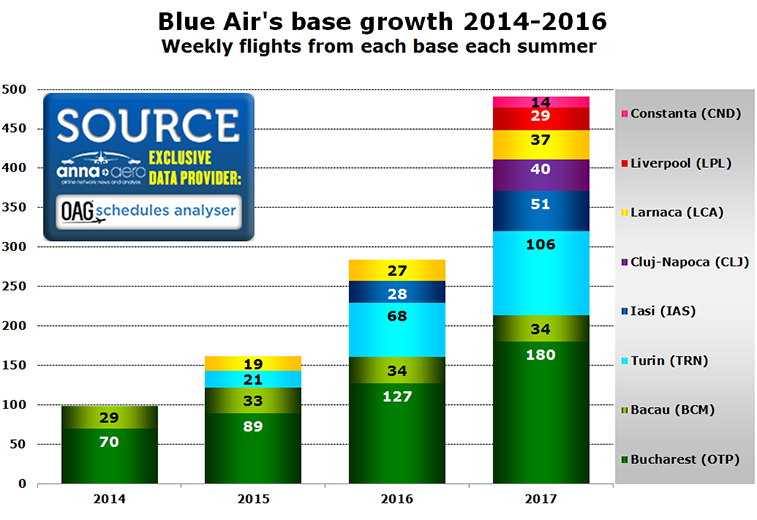 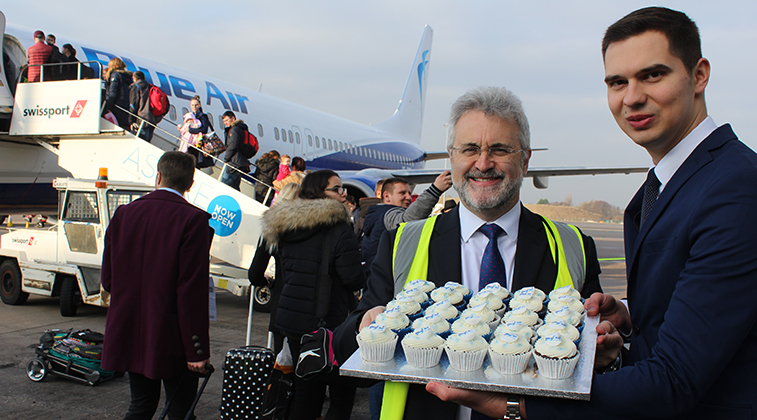 In December Blue Air launched flights between Cluj-Napoca and Birmingham, an inaugural flight that one of anna.aero’s data elves attended. Seen handing out cupcakes to the airline’s inaugural passengers is Paul Kehoe, CEO of Birmingham Airport and Vlad Cristescu, Network Development Executive at Blue Air. Birmingham is the airline’s 15th largest airport operation this summer, helped by the carrier launching a third route from Larnaca to the UK city at the end of March, one of 32 new routes scheduled to begin with the airline this summer.