Air Caraïbes welcomes first A350 while Korean Air is handed its first 787-9; Boeing and Airbus combined deliver 100 units in February 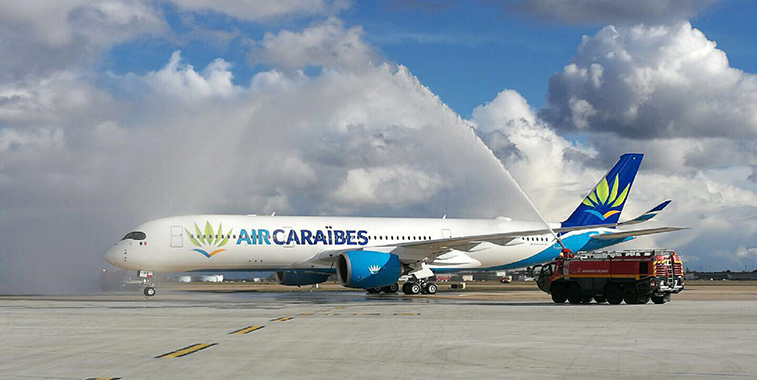 Air Caraïbes welcomed its first A350 on 28 February, with it being greeted at Paris Orly with a water arch salute. The aircraft went into regular scheduled service with the airline on 2 March, and it will initially be used on the carrier’s routes from Orly to Pointe-a-Pitre and Fort-de-France. The airline has an order for three of the type.

Following on from 69 unit deliveries in January, Airbus and Boeing upped productivity in February, with both handing over a combined 100 aircraft, a 45% improvement on the total delivered in January. When compared to February 2016, the total for deliveries last month was two units fewer than the 102 managed in the second month of last year. Boeing was the leader with regards to aircraft handovers last month, with it managing to distribute 51 units compared to Airbus’ 49. This means that so far in the 2017 delivery race Boeing is leading Airbus 95 to 74 with regards to total unit handovers. In February, 75% of deliveries were single-aisle aircraft, with the remaining 25% wide-body. This compares to the 78% single-aisle and 22% wide-body ratio that was registered in the same month of 2016. 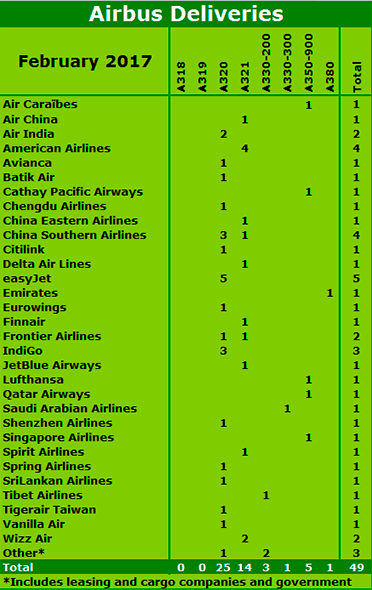 Airbus ended February with a total of 49 unit deliveries. The result is 24 units more than it delivered in January, and three more than it distributed in the same month last year.

For the second month of this year, single-aisle deliveries were led by the A320, with 20 being handed over to 16 companies, of which one was a leasing group. The leading customer was easyJet which welcomed five A320s. Following the A320, the A321 was Airbus’ second most popular single-aisle type in February, with 14 being handed over. Of the 10 airlines which welcomed the A321, American Airlines was the number one customer with four units, with the second biggest recipient being Wizz Air which welcomed two.

In relation to the wide-body market, Airbus handed over 10 units, six more than it managed in January and three better than its total in February 2016. The leading aircraft type to be delivered was the A350, with five being distributed last month. The most significant of these was the A350 that was produced for Air Caraïbes, the carrier’s first of the type. On 2 March the airline introduced the aircraft into regular scheuled service, using the factory-fresh A350 on its routes to Pointe-a-Pitre and Fort-de-France from Paris Orly. The airline has an order for three of the type. Along with the A350, one A380 went to the world’s leading operator of the type – Emirates – while one A330-300 was handed over to Saudi Arabian Airlines. Three A330-200s were also delivered, with one going to Tibet Airlines. 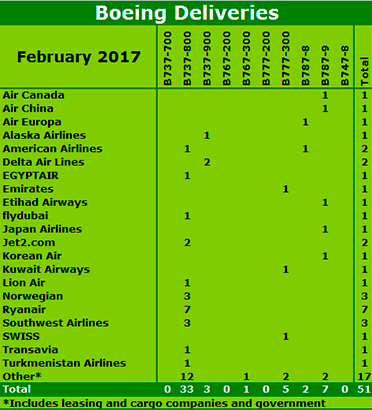 Boeing in February delivered 51 aircraft, seven more than the sum the US manufacturer produced in the first month of this year, but five fewer than it did in the same month of 2016. Of Boeing’s deliveries last month, 36 were single-aisle variants. The leading aircraft model of its single-aisle products was the 737-800, with 33 being handed over to 10 customers and various leasing companies. The leading customer was Europe’s largest (U)LCC, Ryanair, with it welcoming seven of the type, the same amount it accepted in January. Other leading airlines to receive the 737-800 were Norwegian and Southwest Airlines, with both LCCs welcoming three each respectively.

An analysis of the wide-body market shows that Boeing handed over 15 units in February, five more than its European counterpart. The leading model was the 787-9, the same as the month before, with seven being distributed to clients around the world. Two of these went to leasing companies, while Air Canada, Air China, Etihad Airways, Japan Airlines and Korean Air each collected one. For the latter company, this was its first 787-9. “The 787 will be a key member of Korean Air’s fleet as we continue to introduce next-generation airplanes to our customers,” said Walter Cho, President Korean Air. “The aircraft is fuel efficient, quiet, has lower operating costs and is spacious and very elegant. The cabin features are impressive and will ensure maximum comfort for Korean Air’s passengers.” Along with the 787-9s delivered, two 787-8s and five 777-300s were also distributed.