Domestic seat capacity down 2% in Japan in 2016; LCCs still have less than 10% of seats as AirAsia plans to re-enter the market 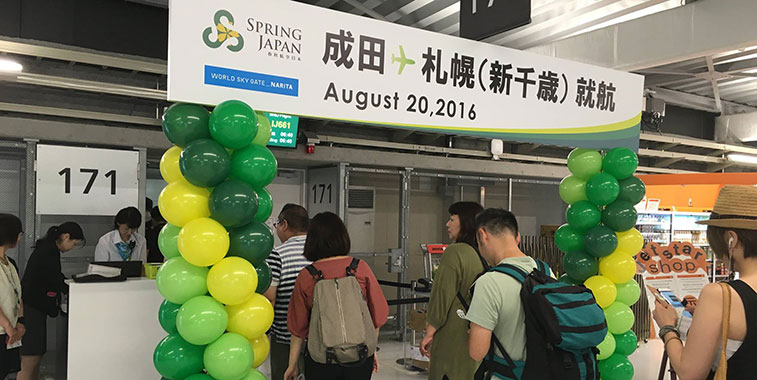 On 20 August 2016 Spring Airlines Japan became the sixth carrier to offer non-stop flights between Tokyo Narita and Sapporo. This is Japan’s most competitive route for carriers, but in terms of daily flights (16) it lags a long way behind the route between Tokyo Haneda and Fukuoka where four airlines are offering a total of 54 daily flights.

With Routes Asia taking place in Okinawa at the end of this week, the first time this event has visited Japan, where of course anna.aero will be there producing our world-renowned show daily magazines, our data elves thought it was a good time to have an in-depth look at the domestic market in the country. According to OAG Schedules Analyser data the domestic air travel market in Japan has grown by just 15% since 2007, the equivalent of annual growth of just 1.6% per annum. In five of the last nine years, annual domestic seat capacity has actually fallen compared to the previous year, including in 2016. The only significant bright spot was 2013 when capacity grew by 15%. This was the first full year of operation for AirAsia Japan (which is now Vanilla Air), Jetstar Japan and Peach Aviation, three LCCs which all launched in the second half of 2012. 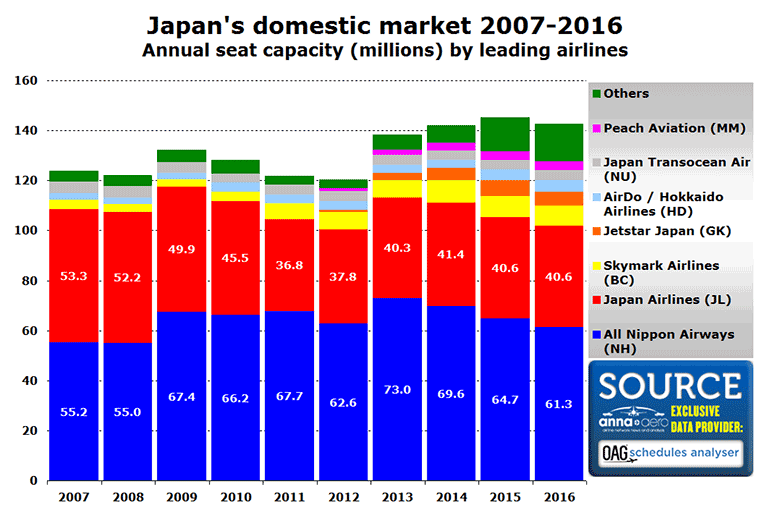 The apparent big jump in capacity (+22%) at All Nippon Airways (ANA) in 2009 is slightly odd, as according to the airline’s own statistics, passenger numbers actually fell almost 10% from 44.0 million in 2008 to 39.7 million in 2009. According to OAG data, although capacity jumped 22%, ANA’s domestic flights fell by 2%. Similarly the 16% jump in seats in 2013 is not reflected in a rise in flights, but an apparent increase in seats per movement from 180 to 210 in just 12 months. ANA’s published statistics show an increase in passenger numbers of just over 2% in 2013.

The airline’s subsidiary Japan Transocean Air saw less disruption to its domestic network. In 2012 JAL became a major shareholder (along with Qantas) in Jetstar Japan. Apart from the airlines shown in the above graph, other significant players in the market are (in descending order of seat capacity in 2016); Solaseed, Star Flyer, Japan Air Commuter, Fuji Dream Airlines, IBEX Airlines, Vanilla Air, Ryukyu Air Commuter and Spring Airlines Japan.

The biggest change since 2007 is that 10 years ago carriers other than JAL and ANA had just 12% of the domestic market. Last year this figure had more than doubled to 29%, although several of the airlines in that category are part-owned by one or other of the big two.

The four main LCCs operating domestically last year accounted for just 7.5% of total seat capacity. After the failure of its first foray into the Japanese market, AirAsia is planning to return to the Japanese market this summer with a new joint venture. The airline (IATA code DJ) already has two A320s assigned to the operation.

Monthly passenger statistics from JAL and ANA shows that both carriers achieve year-round domestic load factors of less than 70%. ANA is gradually pushing up its load factor by about one percentage point each year from 60% in 2011 to 65% in 2016. JAL has managed to raise its annual domestic load factor from around 62% to 63% in the period between 2010 and 2013, to 69% in 2016.

Tokyo Haneda is the main hub for domestic air travel in Japan. The top five domestic routes (as measured by daily flights) all operate from the downtown airport. Only four of the top 14 domestic routes (shown in light green) do not involve either Tokyo Haneda or Tokyo Narita. All of the leading routes are served by at least two carriers. The most competitive route is from Tokyo Narita to Sapporo where passengers have a choice of six airlines since Spring Airlines Japan entered the route last August. 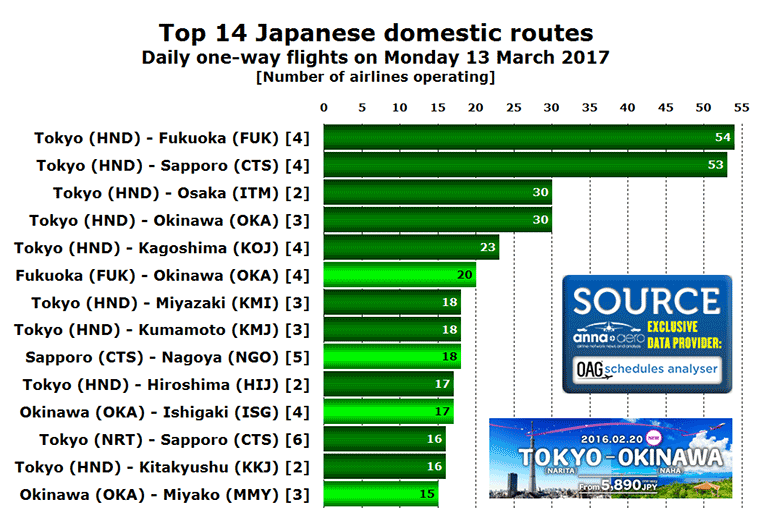 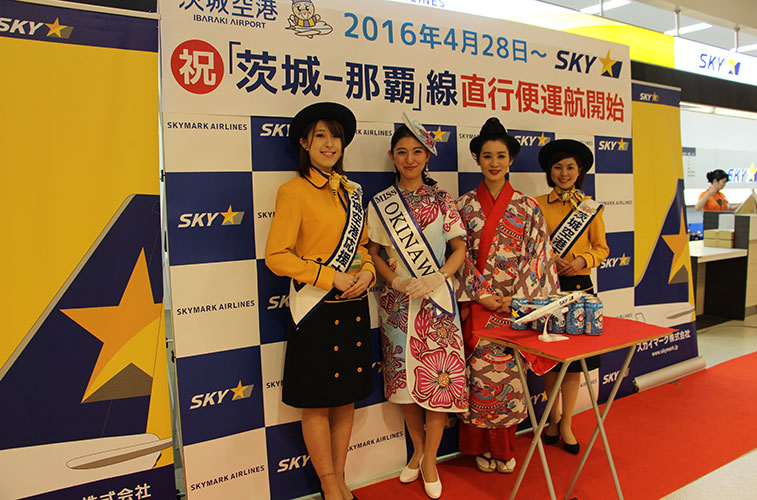 Skymark Airlines is the third biggest player in the Japanese domestic market after ANA and Japan Airlines. On 29 April 2016 the carrier began daily flights between Tokyo Ibaraki and Okinawa using its 737-800s.