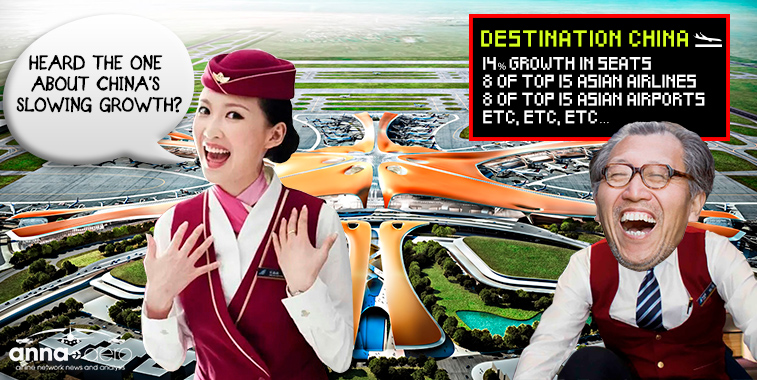 With Routes Asia taking place shortly in Okinawa, anna.aero this week looks at the Asian market comparing current data for 2017 Q2 with 2016 Q2. If anyone was in any doubt as to whether the Chinese market might not be growing as quickly as in the recent past, our analysis of schedule data suggests it is. Not only is China home to the biggest air travel market in Asia, it is also the fastest-growing among the major markets and its airports will welcome more than four times as many additional seats in the second quarter as any other country market in the region. In addition, eight of the top 15 airlines in the region are based in China, and eight of the top 15 airports for additional seat capacity are also in China.

Growth in airport seat capacity across all countries in Asia is currently estimated to be 10% for the second quarter of 2017, which basically covers the first three months of the S17 season. China’s 14% growth is above average, but double-digit growth is also expected in India, Indonesia, Malaysia, Philippines and Vietnam. Japan’s modest 2% growth is the lowest among the major nations in the region with the exception of Taiwan, which is reporting a 2% drop in capacity partly as a result of the demise of TransAsia Airlines and its low-cost subsidiary V Air. Some smaller country markets such as Myanmar (down 2%), Nepal (down 5%) and Bangladesh (down 11%) are also showing declines in Q2 seat capacity, but some of this may be down to some of the airlines in those countries not yet having submitted complete data for all of the period being examined. 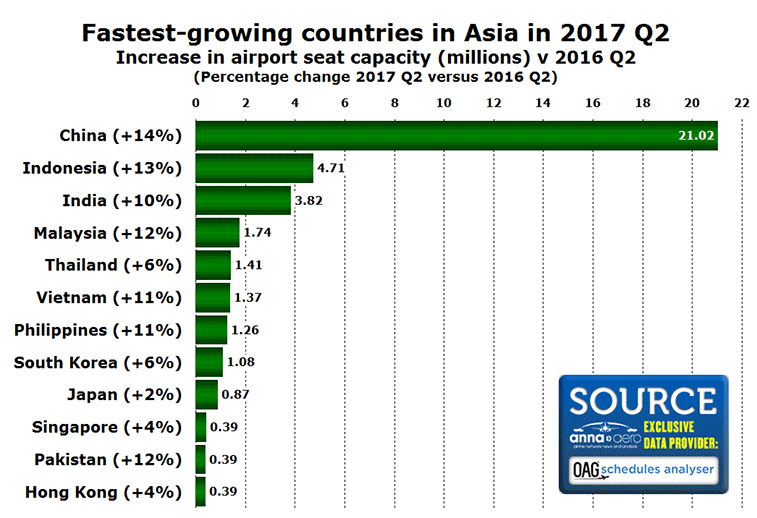 Looking at the biggest airlines (by seat capacity) in Asia in Q2 reveals that China’s ‘big 3’ take the top three positions. There are five other Chinese carriers (highlighted in bright green) in the next 12 positions, with Xiamen Airlines also the fastest-growing of the top 15 with an increase in seat capacity of 42% compared with 2016 Q2. Japan’s two biggest carriers rank fourth and seventh with both barely registering any growth. Separating them are India’s IndiGo (growing by 17%) and Indonesia’s Lion Air. Other slow-growing non-Chinese carriers in the top 15 are Garuda Indonesia (11th, +2%), Korean Air (13th, +1%) and AirAsia (15th, +2%). 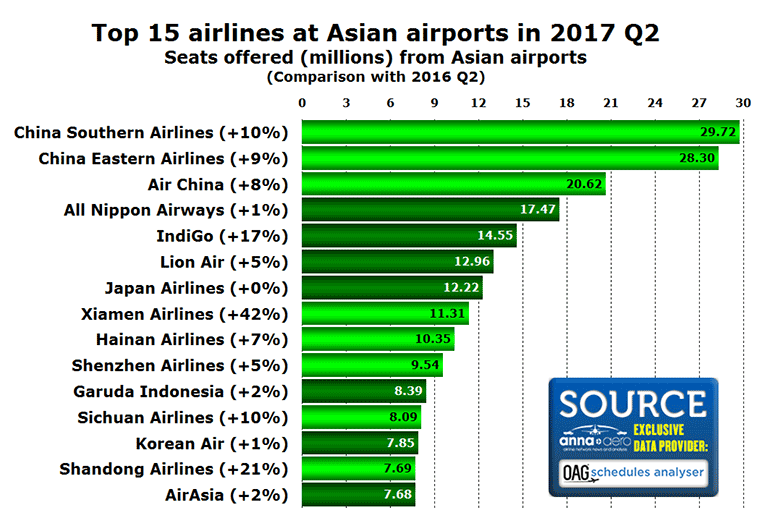 Just missing out on a place in the top 15 are Jet Airways, Vietnam Airlines, Air India, Cathay Pacific Airways and Thai Airways. Of these Jet Airways is the fastest growing at 11% while Cathay Pacific’s Q2 capacity is down 3%. 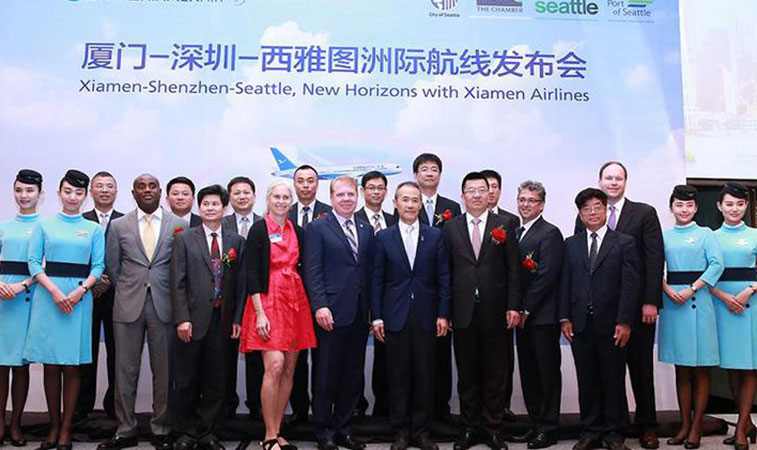 Xiamen Airlines is the fastest-growing carrier among the top 15 in Asia according to our analysis of OAG data. Its growing long-haul network includes Seattle-Tacoma, which was launched on 26 September 2016.

Looking at the region’s airports we have identified those airports registering the biggest increase in available seat capacity. Top of this list is Jakarta’s main airport which will handle over 400,000 additional seats per month in Q2. Not far behind is Kunming, one of eight Chinese airports in the top 15 (highlighted in bright green), which in percentage terms is actually growing more quickly (+20%) than the Indonesian hub (+13%). The six other non-Chinese airports are spread across several countries with two in India (Delhi and Kolkata) and one each in Indonesia (Denpasar), Malaysia (Kuala Lumpur), South Korea (Seoul Incheon) and Vietnam (Hanoi). Of these top 15 airports for capacity growth, the fastest-growing in percentage terms are Zhengzhou and Haikou in China (both +29%) followed by Tianjin (+28%) and Kolkata (+25%). 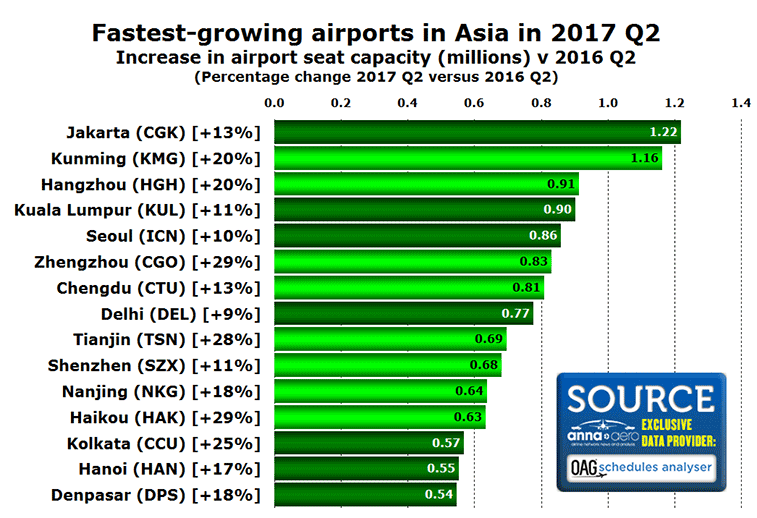 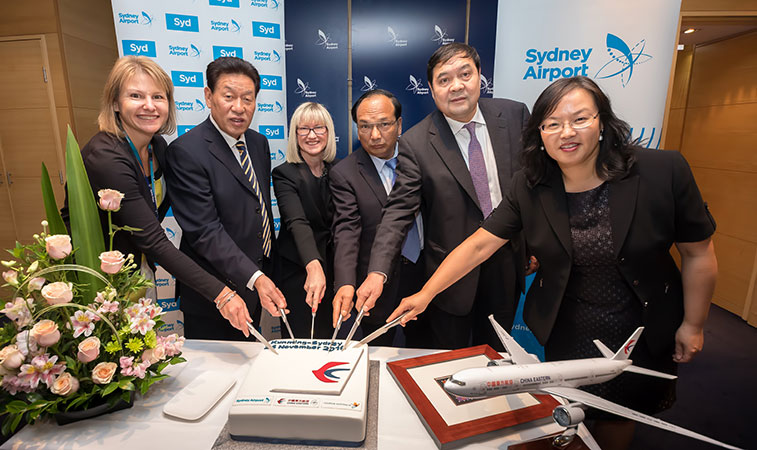 On 24 November 2016 China Eastern Airline began non-stop flights between Kunming (host of Routes Asia in 2015) and Sydney. Kunming’s 2017 Q2 capacity has grown by over one million seats since the same period last year, the second most (after Jakarta) of any Asian airport.