anna.aero’s Publisher was a late-developer. In fact, we are still waiting for him to grow-up (he’s 54). The same can be said of Europe’s late entry into the 2017 Arch of Triumph competition. Having not delivered a winner until the seventh week of competition, the region has won in two out of the last three weeks. That said, Europe’s domination of this competition – it has won all four annual titles since this competition’s inception in 2013 – is yet to materialise on the leader board, with its two victors so far mustering only fifth and eighth positions. How long will the rest of the world hold off the inexorable march of Europe – perhaps to its fifth consecutive annual title? Keep Monitoring!! 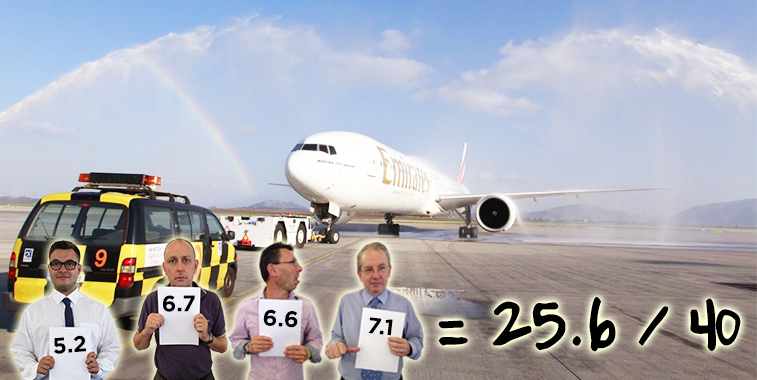 Judges’ comments: What ever you do…don’t Google ‘Who invented the arch’ because the on-line debate still rages despite the several millennia that have passed for this matter to have been settled. While most sources credit the Romans for refining its use, many also point to the fact that the Sumerians, Etruscans, Egyptians, Babylonians and the Greeks all had a hand in its development and use. So with all that time to get it right…why is there such a big gap in this one from Athens??

Crop FTWA images at your peril…you could be reducing your airport’s score!!

Judges’ comments: When we received this picture in the anna.aero offices, some clever person, probably the photographer, had already got his digital scissors onto this image…trimming it top and bottom. He/she was probably thinking they were being helpful. They were not. Our data elves also have to trim the image to make sure its fits on our website…but with the top and bottom now missing, we have had to lose the tenders which were in the original image. The result…no Denver Airport fire trucks on display…and an FTWA that has scored about 8-10 points less than it should have done…take note…wield your digital scissors with care…