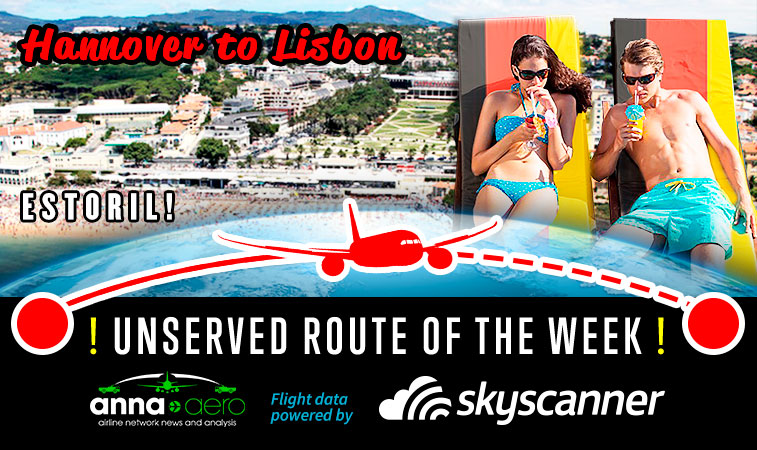 Over 1.1 million wealthy German consumers live in and around Hannover, so it is hardly surprising that almost 10% of its population hunt Skyscanner each year looking for Lisbon flights – a destination which has multiple attractions for a business trip, as a city break – or to enjoy the elegant beaches of nearby Estoril. We believe TAP Portugal will adopt this route within a year.

The email from Kenneth Strickland, Director of Air Service Development, Tampa Airport to anna.aero says it all: “I’m not sure if you guys do any sort of follow-up, but following up on the Unserved Route of the Week piece you guys did for Tampa-Salt Lake City, I wanted to mention that Delta announced the service today [13 March], with daily non-stops beginning in December.”

Indeed since we launched “Skyscanner-anna.aero Unserved Route of the Week” a year ago, four of our target unserved routes have been adopted. And it is significant that airports like Tampa are not unhappy to give us some credit. The full roll-call of services worth millions of dollars is:

So our advice is simple – do as Kenneth did in Tampa – ask to get featured in this column, then forward a link of this story to your potential airline partners, wait for a few weeks, and then sit back and bask in the glory of new route success. Or, buy the inexpensive Skyscanner software, and work out for yourself which of your airport’s unserved routes are in biggest demand based on aspirational data captured from the Skyscanner.net flight comparison site used by +60 million unique visitors per month.

This week, with over 80,000 searches in the last 12 months, a potential new route from Hannover to Lisbon has been identified as the “Skyscanner-anna.aero Unserved Route of the Week.” These numbers are backed up on the ground in Germany. “Hannover-Lisbon was the biggest unserved route at our airport in 2016, with nearly 15,000 embarking passengers (one-way),” claims Peer Zeise, Head of Business Development Airlines at Hannover Airport. 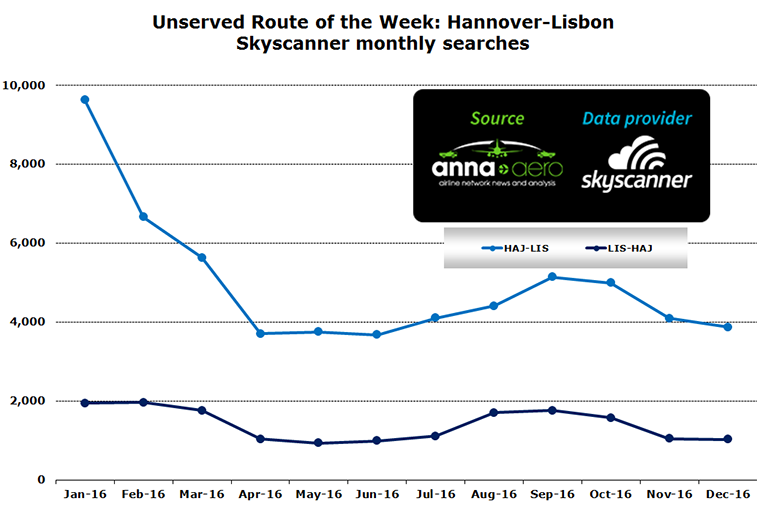 anna.aero encourages Eurowings or TAP Portugal to be tempted by this route

Skyscanner demand on this week’s unserved route shows a big bias towards the German end of the city pair, with an 78/22 split, so on this basis we looked at potential carriers at the Hannover end first. The airport is not really dominated by one carrier, with 24 serving airlines, but Lufthansa is the market leader, with the Star Alliance carrier commanding 24% of weekly seats according to OAG data for the week commencing 14 March. It should be noted that the share of capacity at Hannover for Lufthansa would be increased to 36% if its daughter company Eurowings (incorporating germanwings) was included in its figures, however for the purposes of this analysis the two carriers have been treated separately.

Lufthansa currently offers just two services from Hannover, both domestic routes generating huge feed to Munich (52 times weekly) and Frankfurt (35 times weekly) – making these services the airline’s eighth largest operation in terms of weekly seats (nestled between Barcelona and Vienna). On this basis, the Lufthansa Group would be looking inside the family if it was to be the airline solution for this potential city pair. Currently Eurowings (still filing schedules to OAG under both 4U and EW codes) is the #3 carrier at Hannover, with 12% share of capacity at the airport. Unlike its parent it does at least offer some international sectors from Hannover, flying to Vienna (12 times weekly), London Stansted (six), Barcelona (three), Palma de Mallorca (three), Pristina (weekly) and Tenerife South (weekly). Looking at its existing network, a link to the Portuguese capital would not be out of the question for Eurowings to consider.

The airport’s second largest airline is leisure carrier TUIfly – it is also still headquartered in the city, in nearby Langenhagen. It has a basket of 15 routes being flown from Hannover, unsurprisingly its biggest base from the 25 airports currently in operation, predominantly to Spain (six), but also to far-flung points in Scandinavia, the Middle East and North Africa. A service to Lisbon, more of a traditional city break destination, should therefore be considered as unlikely to be picked-up by TUIfly at this stage. “There are more than 10,000 Portuguese living in our catchment area. This huge community will create additional VFR traffic,” adds Zeise.

Considering the Portuguese end of the route, the potential carriers at Lisbon were contemplated next. The Star Alliance national carrier TAP Portugal is the largest airline at the airport, with 53% of weekly seats, ahead of its nearest rivals, Ryanair and easyJet, with 11% and 9.3% respectively. The #1 carrier currently serves 74 destinations from its biggest hub, five of which are in Germany – Frankfurt (25 times weekly), Munich (19), Hamburg, Berlin Tegel and Düsseldorf (all daily). This will increase to seven served airports in S17, as the airline will add double-daily, E190-operated connections to Stuttgart (10 June) and Cologne Bonn (15 July). So clearly expansion within Germany is on TAP’s network growth agenda and, as Hannover is now the biggest city in the country that the Star Alliance carrier does not operate to (if you assume that the Berlin market is already covered with its Tegel service) then we fully expect this city pair to be announced for S18.

When looking at the previous year of search data, the busiest month for potential traffic flows (for both directions on the route combined) is January 2016, with nearly 12,000 searches, nearly 7,000 higher than the lowest monthly figure, which was recorded in June 2016 (4,700 searches). The seasonality profile of this search data is slightly more extreme than the last Unserved Route of the Week (Orlando to Tokyo) with the low-month traffic representing 40% of the highest month. According to OAG Traffic Analyser, because there is no direct service, the top three connecting options chosen by those passengers who did book travel between Hannover and Lisbon in the past year indicates that the majority of connecting travellers used Frankfurt (34%), Munich (27%) and Brussels (15%). When looking at the traffic flows in reverse, the top three hubs remain unchanged, although Frankfurt’s share dropped four percentage points to 30%, Munich was down seven points to 20%, with Brussels remaining static at 15%.

Indeed, an O&D that is not served by a non-stop flight will typically display a low purchase rate and low traffic. In this instance Skyscanner’s Travel Insight indicates a monthly average of 8.4% for the Hannover to Lisbon route (see graph below). Therefore, if there was a Hannover to Lisbon route, and if bookings performed in line with the “Skyscanner market average” for direct services at both airports (8.9%), the airline operating this route could immediately expect an improved purchase rate of 6%, without any increased marketing spend. However, with nearly 80,000 annual searches a twice or three times weekly service with a 150 to 190-seat aircraft should be immediately viable for the airline selecting to start this potential city pair. “Lisbon is a great city with a lot of sights and business opportunities which will create high volumes of leisure and business passengers. Moreover, Lisbon provides of course great connections to South America. Hannover is the home airport of Volkswagen (the second-largest automobile producer in the world) and numerous automotive suppliers like Continental Tyres, which all have a huge business travel demand to Portugal and South America,” concludes Zeise. 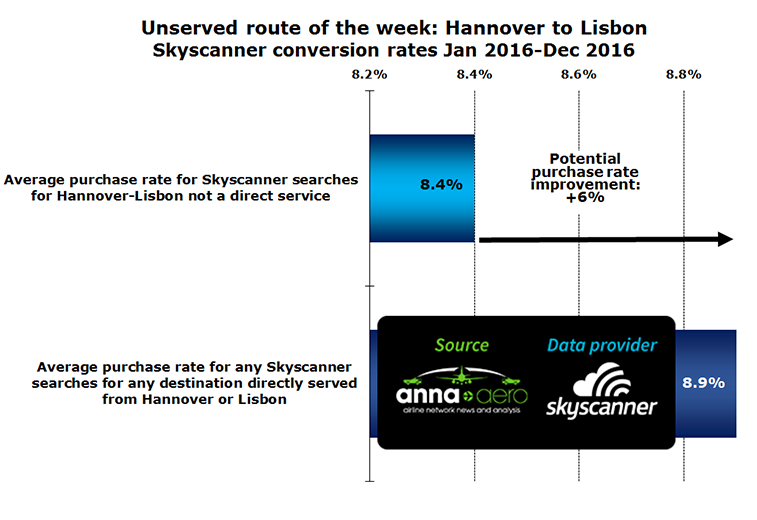