Ryanair arrives in Ukraine with Kiev and Lviv links 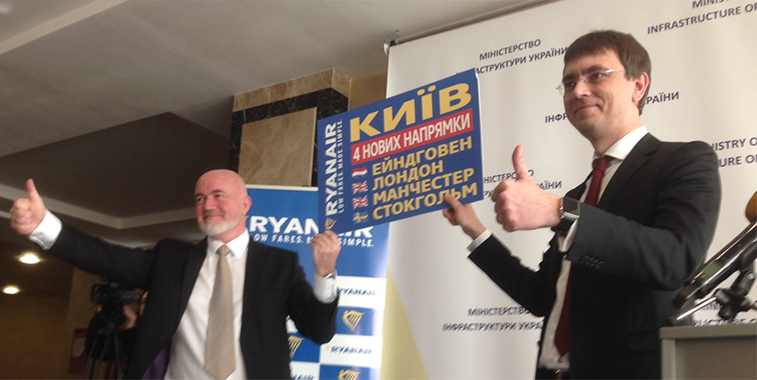 David O’Brien CCO of Ryanair and Volodymyr Omelyan, Minister of Infrastructure of Ukraine, officially announce that Ryanair is to begin serving Ukraine from the start of W17/18. The Irish ULCC will commence four new services from the capital’s Kiev Boryspil Airport and seven from Lviv Airport in western Ukraine. O’Brien said: “Ryanair will be another bridge that connects the infrastructure of Ukraine with Europe and it will be a good signal for the world’s major investors.”

Less than 24 hours after Wizz Air revealed its own four new routes from Ukraine, Ryanair stomps all over it (in typical fashion) by announcing its own arrival in the country, with four routes from Kiev Boryspil and seven routes from Lviv. Launching in W17/18, the new routes (and weekly frequencies) are as follows:

Referring to schedules for the week commencing 16 March (as the airport’s W17/18 schedules are currently not complete), there are 20 carriers presently operating from Boryspil, led by Ukraine International Airlines (UIA). Based on these weekly capacities not changing between now and the start of W17/18, Ryanair’s arrival at the airport will see it immediately become the #5 carrier at the airport in terms of weekly seats available. UIA will be increasing its dominance at Boryspil this summer, it already flies to 49 destinations, by adding two further connections to its largest operation – a daily domestic service to Kherson (14 April), as well as a daily route to Budapest (15 June).

Up until Ryanair’s announcement, Wizz Air was the low-cost airline big noise in town, with its operation across Kiev at the city’s Zhulyany airport. Looking at the airport’s schedules for the week commencing 16 March (as the airport’s W17/18 schedules currently only have three airlines filed), there are presently seven carriers operating from the airport, led by Wizz Air. This will increase to nine over the summer, after Georgian Airways launches its daily service from Tbilisi (2 Apr) and Alitalia starts a daily connection from Rome Fiumicino (1 May). Wizz Air’s current network from Zhulyany is as follows:

Wizz Air will have strengthened its position in the capital city before Ryanair’s launch, as the Budapest-based ULCC plans to start six more services from Zhulyany this summer – Warsaw Chopin (1 July, three weekly frequencies); Lublin (25 August, two); Nuremberg (25 August, two); Poznan (25 August, two); Copenhagen (26 August, three); and Frankfurt Hahn (26 August, three). These new routes will add 15 weekly frequencies and 2,700 weekly seats to Wizz Air’s capacity at Zhulyany, meaning it will be around three times the size of Ryanair when the latter begins its operations at Boryspil.

The key battleground in Kiev between the two airlines will be to the UK, and more specifically to London – with Wizz Air already flying twice-weekly to Luton, and Ryanair offering five times weekly operations to Stansted from W17/18, as well as three times weekly to Manchester. The Zhulyany incumbent presently does not have any services to Sweden or the Netherlands, so there is little further network overlap.

Ryanair romps into #2 spot in Lviv

Ryanair’s arrival in Lviv is likely to have far more of a wide-ranging impact, as the ULCC’s seven services and 16 weekly frequencies will immediately see it take the #2 position at the airport behind UIA. According to this week’s schedules, the airport which serves the largest city in western Ukraine is currently served by 14 airlines, of which Wizz Air is not one. Of the 16 city pairs operating from Lviv at this time, only one of Ryanair’s routes will face competition, albeit indirect. Lufthansa has a five times weekly service to its second largest hub at Munich, whereas Ryanair will offer twice-weekly rotations to nearby Memmingen.

By the time Ryanair begins its seven routes this winter, Wizz Air will have returned to Lviv, an airport it last served on 25 April 2015, when referring to OAG schedules. Wizz Air will begin a twice-weekly operation to Berlin Schönefeld on 18 June, which means that Ryanair will be going head-to-head with its fellow ULCC on the 784-kilometre sector.

On Ryanair’s launch of services, the DG of Lviv Airport, Tetiana Vasylivna, said: “We are extremely proud and happy to be among the first airports in Ukraine to host flights operated by powerful low-cost airline Ryanair.” She also described the launch as “highly anticipated” by local people as well as “European tourists who have been waiting for the opportunity to travel to the city comfortably and inexpensively for a long time.”

The airline’s CCO David O’Brien, was equally gushing, saying: “Ryanair will be another bridge that connects the infrastructure of Ukraine with Europe and it will be a good signal for the world’s major investors. There is a pretty large potential and fewer connections than there should be. Most Ukrainian traffic as far as I can see goes to Istanbul, Frankfurt or Warsaw.”

Minister of Infrastructure of Ukraine, Volodymyr Omelyan, said: “The arrival of Ryanair in Ukraine is without exaggeration, a remarkable event for Ukraine. Negotiations lasted for several years, and I am proud that our team was able to successfully hold them. Today we can officially declare – Ryanair is in Ukraine.” 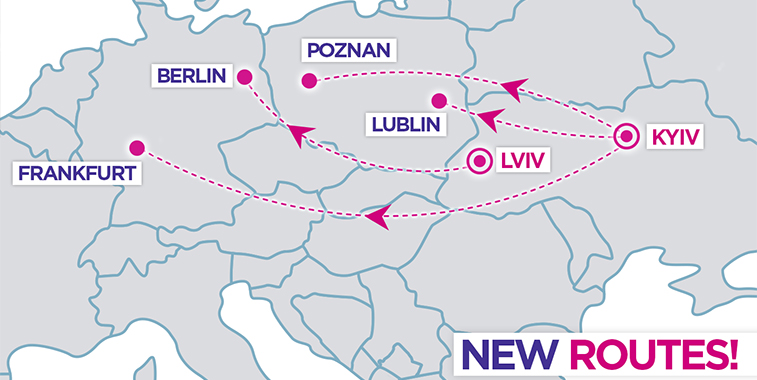 Uncannily and surely by no coincidence Wizz Air’s announced its new routes from Ukraine less than 24 hours before Ryanair proclaimed its arrival in the country. While Wizz Air’s three new routes from Kiev Zhulyany above add to its existing S17 plans to launch services to Nuremberg, Warsaw Chopin and Copenhagen, its new route from Lviv marks its return to the airport after a more than three-year hiatus.