LEVEL launches four routes from Barcelona base; will Fiumicino and Orly be next? 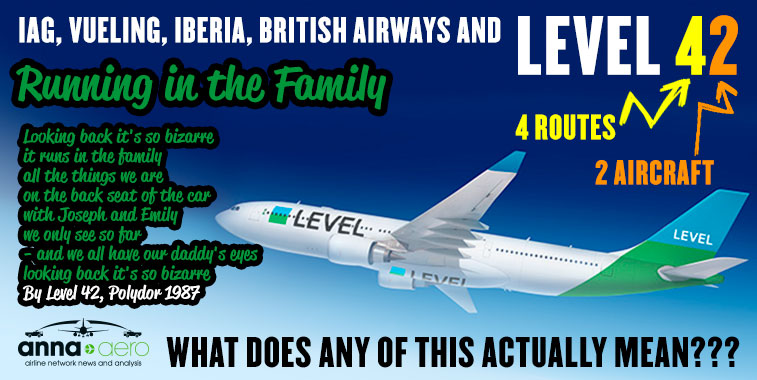 LEVEL has been set up to spoil Norwegian’s new Barcelona long-haul services which also start in June. anna.aero says: ‘good for OAK’ in pulling off another “best way to San Francisco Bay” success – but have LEVEL’s masters missed an opportunity by not flying straight to San Francisco?

Probably one of the worst-kept secrets in the business, International Airlines Group (IAG) is launching LEVEL – its new low-cost long-haul airline (LCLH) brand in June 2017, with flights from Barcelona to Los Angeles, Oakland, Buenos Aires and Punta Cana. LEVEL will fly two new 314-seat (293 economy and 21 premium economy seats) A330-200s branded in its own livery (which must have taken at least 10 minutes to devise – while the designer was on a coffee break, and also watching funny YouTube clips of animals falling off furniture), and will be initially operated by Iberia’s flight and cabin crew (flights are currently filed in OAG schedules under IB code too). Frequencies and start dates are as follows, with no departing flights currently on Mondays:

IAG’s decision to launch its own LCLH was primarily to defend one of its back yards from the market disruptor, Norwegian. Interestingly (and surely no coincidence), LEVEL will start its flights from Barcelona to Los Angeles four days before Norwegian, which begins its twice-weekly (Mondays and Fridays) operation on 5 June. Its the same story on the Barcelona-Oakland city pair, as LEVEL launches its flights five days prior to the Scandinavian LCC, which will offer a twice-weekly (Wednesdays and Saturdays) service to the Californian city from 7 June. Also noteworthy, on 6 June Norwegian will also begin twice-weekly (Tuesdays and Thursdays) operations to New York Newark and a twice-weekly (Tuesdays and Saturdays) route to Fort Lauderdale on 22 August.

Willie Walsh, IAG CEO, said: “Barcelona is Vueling’s home base and this will allow customers to connect from Vueling’s extensive European network onto LEVEL’s long-haul flights.” The opportunity for the IAG in-house LCC to feed the new member of the family is immense, as Vueling will offer a network of 124 non-stop destinations from its biggest base in the peak of S17. Following on from that in this analysis, anna.aero has taken a look at not just the competitive landscape within Spain, but also across Europe, for seats to these four destinations this summer.

LAX has most to lose

Of the four markets where there is potential for Vueling/LEVEL to steal connecting traffic from other airports, the most potential can be found in the volumes heading towards Los Angeles, as it has 218 weekly frequencies on offer from 20 European airports (not including the Spanish airports above). This is followed by Oakland/San Francisco (178 weekly departures from 19 airports), then Punta Cana (38 from 12) and finally by Buenos Aires (36 from 5).

Only three airports have services to all four destinations – namely Paris CDG, Frankfurt and Amsterdam – with London having all four city pairs if flights from its Heathrow and Gatwick airports are combined. Aside from Norwegian’s long-haul operations, only two other LCLH carriers are flying on any of these city pairs, with WOW air operating to Los Angeles and San Francisco, as well as Eurowings offering Punta Cana three times weekly from its Cologne Bonn base. With the majority of other services being flown by legacy airlines, they are joined by a handful of European leisure carriers like Condor, XL Airways France, Thomson Airways, Thomas Cook Airlines and others to vary the airline business models on these sectors still further.

Taking it to the next LEVEL (base)

What was made clear in all the media spin was that although Barcelona has been chosen as the first European city for the launch of IAG’s new operation, LEVEL will look to expand its flights from other European cities. “This is just the start. We’re really excited about the opportunities for expansion and we plan to bring LEVEL to other European destinations,” suggests Walsh. Looking at the airline’s biggest bases, its operations at Rome Fiumicino and Paris Orly would appear to be the most likely options for LEVEL to expand if it wants to ensure feed from existing Vueling services. The Italian hub presently has a network of 50 non-stop destinations, whereas Orly is significantly smaller with 18, despite its weekly seats not being that much lower, according to OAG schedules data for week commencing 1 July. 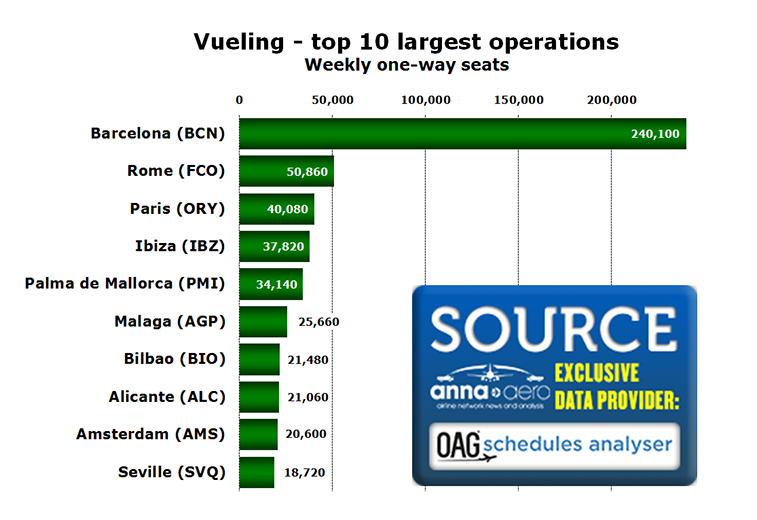 In terms of linking Fiumicino to LEVEL’s initial four destinations, both Los Angeles and Ezeiza are already served, leaving opportunities to Oakland/San Francisco and Punta Cana for the LCLH carrier to contemplate. When considering these routes at Orly, only one is presently served from France’s second busiest airport, that being Air Caraïbes’ twice-weekly service to Punta Cana. As detailed before, all four routes are available across town at Paris CDG. Of course LEVEL may decide to start a completely different group of routes from these two potential airports based on the respective market opportunities at each, but this would signify a switch in strategy from other LCLH airlines which tend to ‘join-the-dots’ from its hubs to its destination cities, just as Norwegian has done with its pan-European long-haul network. anna.aero will bring you the news and analysis first when Walsh’s words come to fruition. 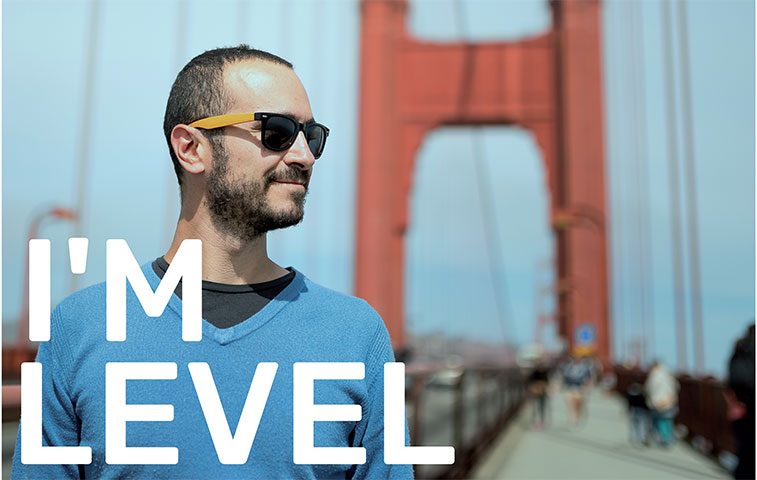