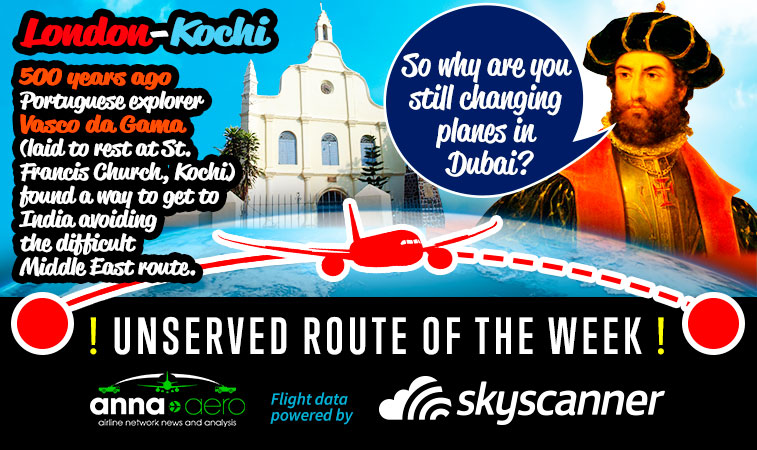 Come on British Airways and Air India – what more analysis do you need? There are 1.4 million annual searches on Skyscanner for London-Kochi with 12% of these enquiries resulting in bookings via Skyscanner! That’s 170,000 customers – at the moment almost half of are snapped up by Emirates and Etihad Airways.

With nearly 1.4 million searches in the last 12 months – our biggest ever unserved new route opportunity (nearly 120,000 searches per month!) – a potential city pair from London to Kochi has been identified as this week’s “Skyscanner-anna.aero Unserved Route of Week” – a powerful analysis based on aspirational data captured from the Skyscanner.net flight comparison site used by +60 million unique visitors per month. 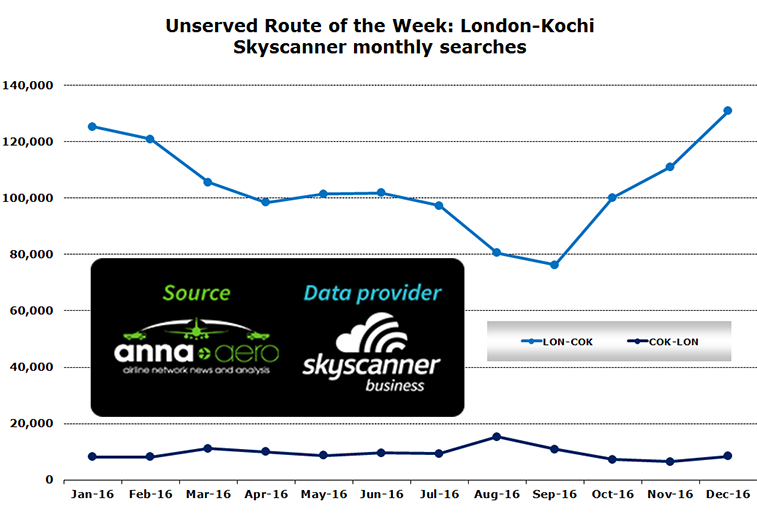 anna.aero shouts out to BA or Air India to serve this route

Skyscanner demand on this week’s unserved route shows a massive bias towards the UK end of the city pair, with a 92/8 split, so on this basis we looked at potential carriers at the London end first. Although London Gatwick is increasingly adding long-haul services to its network, indeed it has non-stop services to Goa, the majority of Indian destinations are served from London Heathrow. Indeed Heathrow maintains the majority of Indian capacity, offering 99% of weekly seats across its six non-stop destinations – Delhi, Mumbai, Bengaluru, Hyderabad, Chennai and Ahmedabad. Therefore, as none of London’s other long-haul capable airports currently has any Indian services, and presumably Gatwick’s route development team is actively chasing service to Delhi or Mumbai, our analysis on a potential route to Kochi therefore focuses on it being launched from Heathrow.

Unsurprisingly, the airport is dominated by British Airways, with the oneworld carrier commanding 48% of weekly seats according to OAG data for the week commencing 21 March. The airline currently offers 49 weekly services to India, all presumably generating significant two-way volumes of feed (particularly to the US and Canada) to Delhi, Mumbai (both double-daily), Hyderabad, Bengaluru and Chennai (all daily). These services make India the airline’s eighth largest country market in terms of weekly seats (nestled between Netherlands and Switzerland). Looking at anna.aero’s Rest of the World Airport Traffic Trends database, Kochi, India’s seventh busiest airport, should be high on BA’s to-do list, as only Kolkata has a higher passenger throughput, yet it too remains unserved (in fact Ahmedabad is smaller than both, but is served from Heathrow by Air India). On this basis, a link to Kochi would not be out of the question for the oneworld member to consider, especially now given this Skyscanner data.

Heathrow’s second largest airline is Virgin Atlantic Airways, but with 10 times less capacity than BA, at just 4.3% of weekly seats. It has a basket of 16 routes from Heathrow, the majority of which are to the US through its relationship with parent Delta Air Lines, although it does also fly to Delhi with a daily rotation, and has in the past flown to Mumbai. A service to Kochi, although it can’t be ruled out, looks unlikely as most of Virgin Atlantic’s recent route development has been focused on going west rather than east.

Considering the Indian end of the route, the potential carriers at Kochi were contemplated next. The LCC and India’s largest carrier IndiGo is the biggest airline at the airport, with 23% of weekly seats, ahead of its nearest rivals, Jet Airways and SpiceJet, with 12% and 10.9% respectively. In fourth spot is Air India (10.6%), but if its in-house LCC Air India Express (6.1%) is included in its total, then the group leaps into second place. Although the #1 carrier currently serves 26 destinations from its ninth biggest hub (shared with Goa), IndiGo is a domestic and regional LCC, and the same can be said of SpiceJet. Jet Airways, which serves Amsterdam, Heathrow and Paris CDG, as well as Air India which flies from Delhi, Mumbai and Ahmedabad into Heathrow, would both be better positioned to consider this route. However, as all of Jet Airways’ European flights currently originate in either Delhi or Mumbai, this route is a better fit for Air India which is also showing more of an appetite to open up India’s regional airports to intercontinental services.

When looking at the previous year of search data, the busiest month for potential traffic flows (for both directions on the route combined) is December 2016, with nearly 140,000 searches, over 52,000 higher than the lowest monthly figure, which was recorded in September 2016 (87,000 searches). The seasonality profile of this search data is less extreme than the last Unserved Route of the Week (Hannover to Lisbon) with the low-month traffic representing 62% of the highest month. According to OAG Traffic Analyser, because there is no direct service, the top three connecting options chosen by those passengers who did book travel between London and Kochi in the past year indicates that the majority of connecting travellers used Dubai (23%), Abu Dhabi (20%) and Mumbai (15%). A total of 17 different airports were used for connecting traffic between these two cities, with the remaining Middle East Big 3 hub – Qatar Airways’ Doha hub – just behind Mumbai in fourth place.

With a lack of direct services, travellers between these two cities have clearly got used to these one-stop alternatives. However, the market demand is extremely buoyant – as the graph below shows, with over 12% of the Skyscanner searches for these indirect London to Kochi services converted into ticket sales – that’s more than the average 9.8% achieved for Skyscanner conversion/purchase rates for all direct routes available from either London or Kochi. However, with nearly 1.4 million annual searches a daily wide-body service should be immediately viable for the airline selecting to start this potential city pair. 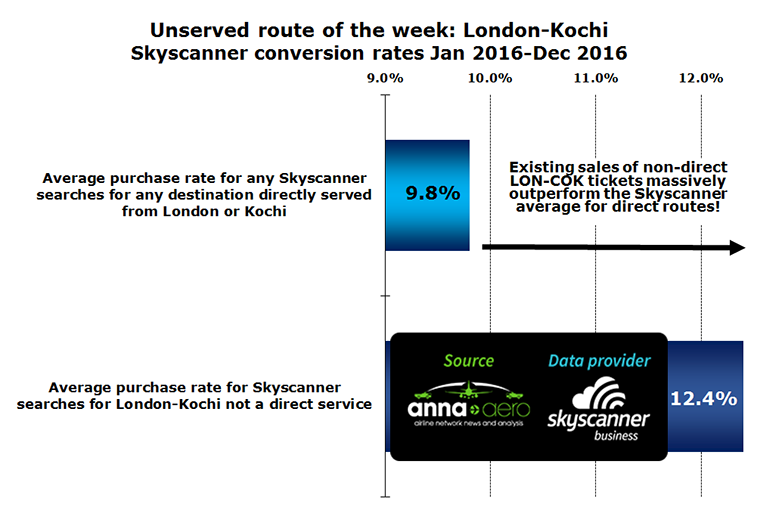