anna.aero joins Flybe as it begins services to London Heathrow 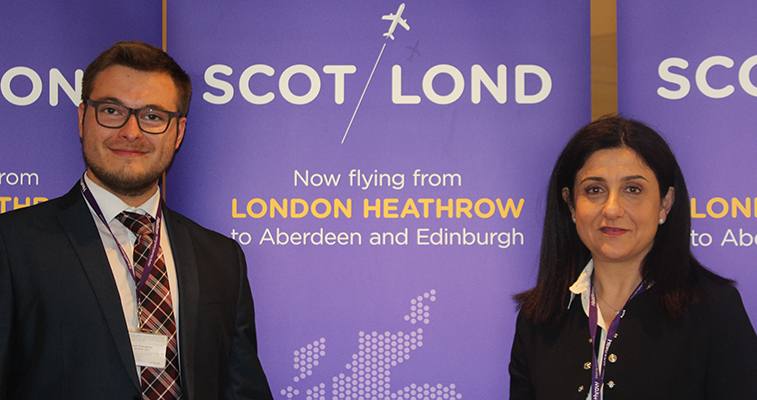 On 27 March Flybe celebrated the start of services to London Heathrow from Edinburgh and Aberdeen, routes it had started the previous day. Seen promoting the new routes at Heathrow are anna.aero Assistant Editor Jonathan Ford and Flybe CEO Christine Ourmieres-Widener. By beginning services to Heathrow, Flybe will be operating 25% of all weekly flights between Edinburgh and Europe’s busiest airport, and 29% of all weekly flights between Aberdeen and Heathrow.

On 26 March Flybe began flights to London Heathrow from Aberdeen and Edinburgh. The airline has taken up slots at Europe’s busiest airport after they were freed-up by Virgin Atlantic Airways due to it ending its Little Red operations in April 2015. Since Little Red’s demise, British Airways has had a monopoly on both routes out of Heathrow for two years. With flights to Edinburgh operating up to four times daily and Aberdeen three times daily, the services complement the carrier’s existing flights to London City from both Scottish airports.

With these launches, Flybe now operates 7.0% of all weekly seats between London and Scotland according to OAG schedules, with British Airways (51% of seats), easyJet (34%) and Ryanair (8.9%) being larger in terms of seat offering. Although Flybe is the smallest operator in regards to seats, its introduction of flights to Heathrow has meant it has grown its seat capacity share between Scotland and London from 3.8%. As a result, Ryanair has seen its market share drop by nearly one percentage point from 9.8%, whereas British Airways has seen its market share drop two points from 53% while easyJet remains constant at 34%. What also gives Flybe an advantage over easyJet and Ryanair is that it offers multiple connections through Flybe’s various codeshare partners on the routes, including Emirates and Virgin Atlantic.

Last week anna.aero’s Assistant Editor Jonathan Ford was invited to attend the celebratory flight between Edinburgh and Heathrow which took place on 27 March, the day after the inaugural flight. Of course the invitation was accepted, and anna.aero’s Ford was soon on his way up to the Scottish capital to join in on Flybe’s historic route launch. 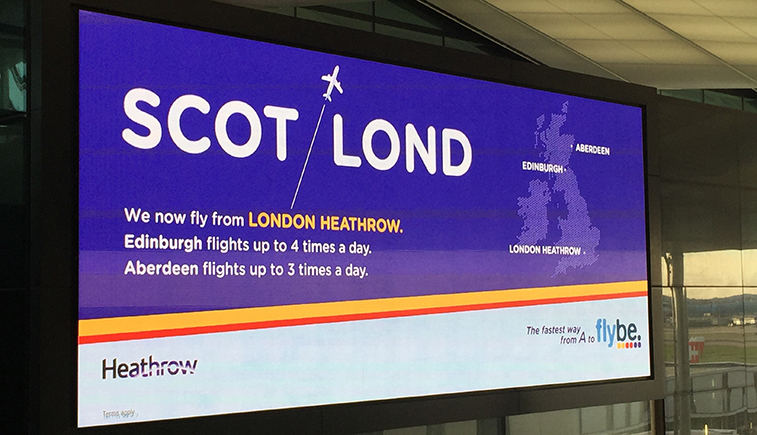 The day before Flybe’s celebrations took place, the carrier began flights to London Heathrow, with 26 March coinciding with the first day of the S17 season. In order to get to Edinburgh for the celebration flight, anna.aero’s Assistant Editor Jonathan Ford flew on one of the first flights out of Heathrow. On arrival at the London airport’s Terminal 2, where Flybe flights will operate from, he was greeted by a massive digital advert which was promoting the airline’s new routes to Scotland. In total 25 weekly flights will be offered to Edinburgh and 18 weekly flights to Aberdeen. As stated Flybe will be operating from Heathrow’s Terminal 2. To check-in for his flight to Edinburgh, Ford discovered that the airline’s check-in area was located in Terminal 2’s Zone C. Once checked in and through security, Ford noticed one of Flybe’s first flights to Aberdeen departing while he was walking along the mezzanine floor in departures. All Flybe flights will depart from gates A1-5 due to the Q400s parking on remote stands at Heathrow. 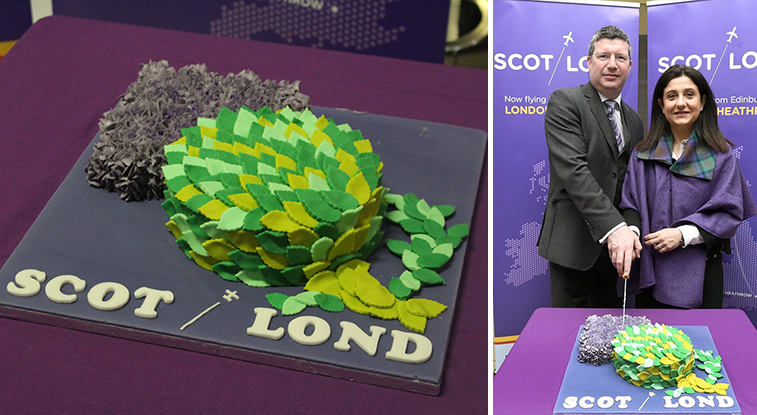 Celebrations began early at Edinburgh Airport on 27 March, with the first action of the day being the unveiling of the cake and its cutting. Seen carrying out the cutting of the route launch showstopper are Edinburgh Airport CEO Gordon Dewar and Flybe CEO Christine Ourmieres-Widener who sported a tartan throw for the Scottish route launch occasion. Once the cake had been cut, it was then time for the speeches to take place. Those who made speeches at the launch in Edinburgh were Dewar and Ourmieres-Widener along with Drew Hendry MP, SNP Spokesperson for Transport. Ourmieres-Widener said of the new routes from Aberdeen and Edinburgh to Heathrow: “We are so pleased to confirm further our commitment to Scotland by offering even more flights to London with our two new routes from Edinburgh and Aberdeen to Heathrow’s Terminal 2: The Queen’s Terminal, giving passengers greater choice and also linking them with our range of codeshare partners through our ‘One Stop to the World’ approach. Passengers can, for example, fly onwards with Virgin Atlantic to Los Angeles or New York, or fly east with Singapore Airlines – all on one ticket. Early bookings show this is an increasingly important part of the booking profile for these two new routes and we look forward to adding even more codeshare partners shortly. 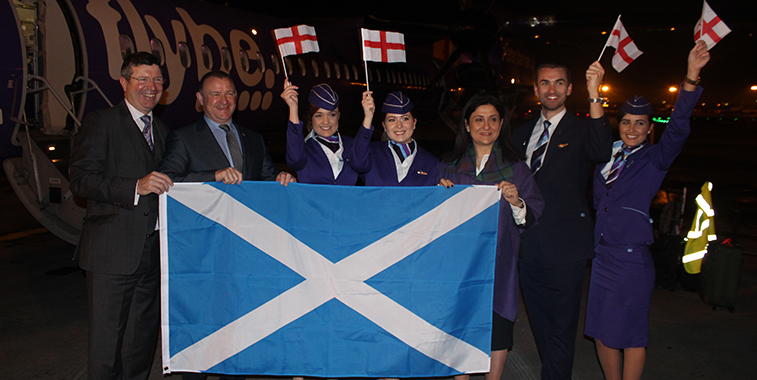 With the cake cut and the speeches made, it was time for the route launch delegation to head out to the apron for some more photos before boarding commenced. One of the key photos taken included the waving Scotland and England flags, showing the connection between the two nations of the UK. Holding the Scottish flag are Dewar, Hendry and Ourmieres-Widener, with the English flags being flown by Flybe crew. 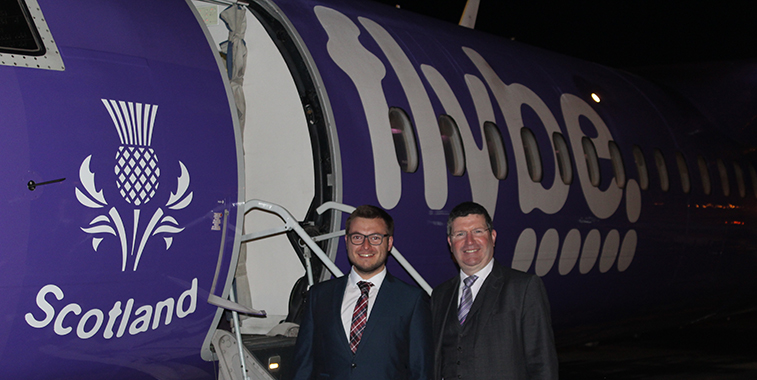 Once all the official photos had been taken, it was time for boarding. The celebration flight to Heathrow was flown on a Q400 which was adorned with a special Scotland logo. anna.aero’s Assistant Editor Jonathan Ford and Edinburgh Airport CEO Gordon Dewar highlighted the new branding before Ford boarded flight BE2101 to Heathrow, the first flight of the day from Edinburgh to Heathrow. British Airways’ first departure to Heathrow was at 06:55, some 55 minutes after flight BE2101 departed. 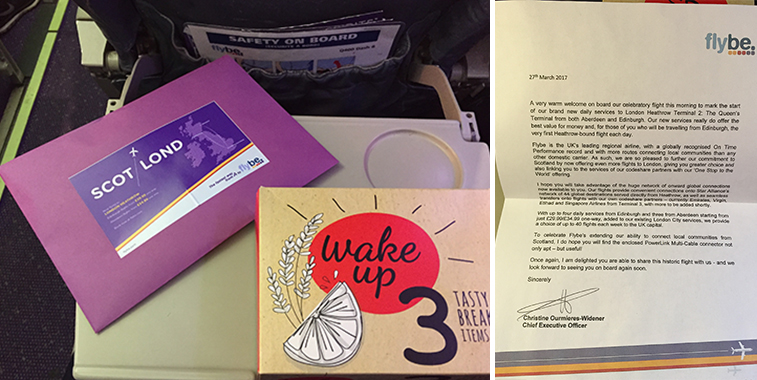 On arrival at Heathrow, passengers were piped off the aircraft with traditional bag pipes and Scottish dancing. The second apron photoshoot also took place with Ourmieres-Widener being greeted off the aircraft by Flybe Chairman Simon Laffin. Once all photos had taken place and the Flybe delegation had passed security, it was time for everyone to head to The Gorgeous Kitchen on the upper level of Terminal 2 Departures at Heathrow for breakfast. Among the selection of foods on offer were Scottish oat pancakes, Scottish salmon and eggs plus Scottish oat porridge with a blueberry compote accompanied by a honey and almond topping. 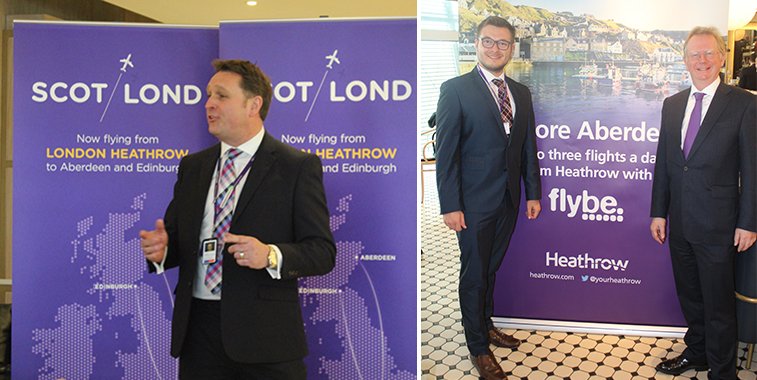 While breakfast took place, speeches were made by Derek Provan, Operational Strategy Director, London Heathrow Airport, and Simon Laffin, Chairman of Flybe seen pictured with anna.aero’s Jonathan Ford. During his speech Provan said: “More airlines flying routes to Scottish airports means more flights, more competition and choice for families, and more visitors to Scotland. With Flybe operating from the award-winning Terminal 2, Scottish passengers and businesses now have direct access from Heathrow to over 180 global destinations including some of the fastest growing export markets around the world. We’re delighted to welcome them to the Heathrow family.” Laffin commented about the importance of connections between Scotland and the rest of the UK. “Scotland does four times more business with the rest of the UK than what it does with all of Europe. By increasing connectivity and options for business travellers, we are further strengthening these links between the two.” anna.aero would like to thank Flybe for allowing anna.aero to be on the celebratory flight from Edinburgh, and wishes the airline the best of luck with its new venture at Heathrow.