Barcelona-Bangkok is “Skyscanner Unserved Route of the Week” ‒ over 1.1m searches; a tempting return for Thai or one for newcomer LEVEL? 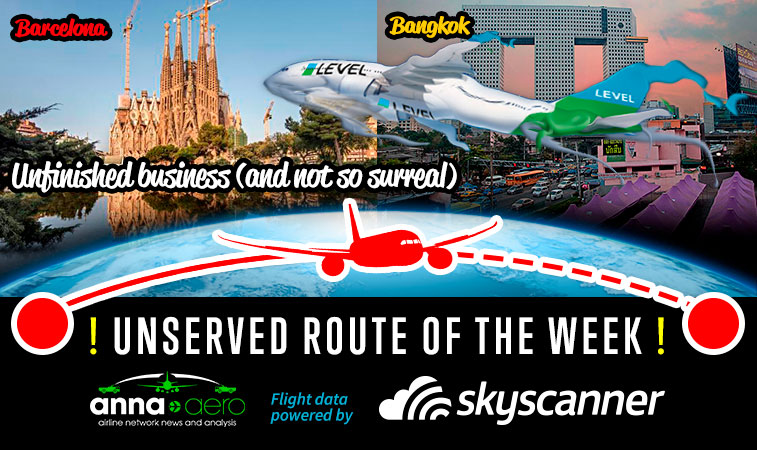 LEVEL needs to jump onto the unserved Barcelona to Bangkok city pair before it melts away like a Salvado Dalí picture, the famous artist which is synonymous with the Catalan city. Thai Airways used to fly into Madrid until 2015, but since then the FIGUST country (FIGUST countries are Europe’s top table of air travel nations – France, Italy, Germany, UK, Spain and Turkey) has gone unserved.

With nearly 1.1 million searches in the last year – one of the biggest ever unserved new route opportunities – a potential city pair from Barcelona to Bangkok has been identified as this week’s “Skyscanner-anna.aero Unserved Route of Week” – a powerful analysis based on aspirational data captured from the Skyscanner.net flight comparison site used by +60 million unique visitors per month. “This route used to be served direct from Madrid with Thai Airways, but since 2015 it is an unserved route from Spain,” adds Irene Gracia Lacarra, Head of Airport Marketing Division, Aena. Will a new route have been announced before the Spanish city hosts the 2017 World Routes conference in September? 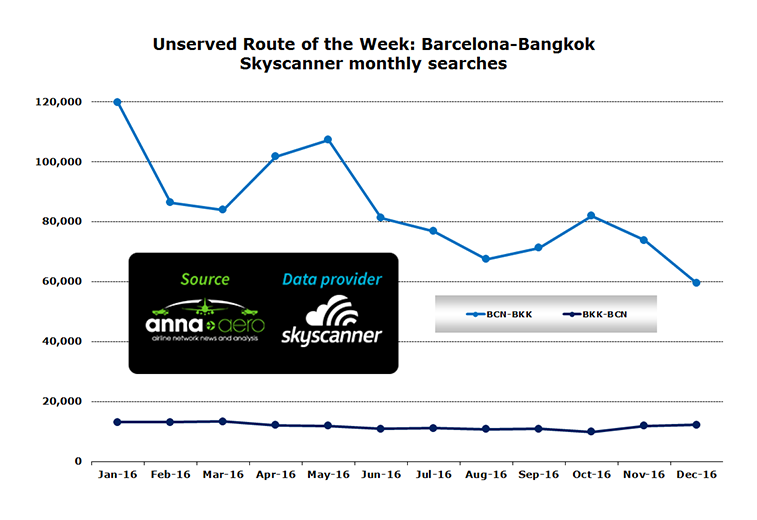 anna.aero would love LEVEL or Thai to tackle this route

Skyscanner demand on this week’s unserved route shows a massive bias towards the Spanish end of the city pair, with a 88/12 split, so on this basis we looked at potential carriers at the Barcelona end first. Unsurprisingly, the airport is dominated by Vueling, with the IAG-owned LCC commanding 35% of weekly seats according to OAG data for the week commencing 28 March. The airline currently offers 97 non-stop services from its biggest base, all of which are domestic or European services. A better prospect would be to look inside the IAG family of airlines perhaps, and encourage LEVEL, the new low-cost long-haul (LCLH) carrier to be based at Barcelona from June, to serve this route. While the LCLH fledgling is currently earmarked to serve destinations going west from Spain – as reviewed in our recent article – surely a route to Bangkok must be high on the to-do list should LEVEL consider flying east from Barcelona.

Barcelona’s second and third largest airlines are also both LCCs, with Ryanair in second spot holding 14% share of weekly seats, ahead of easyJet in third, with 7.3% of weekly seats. Neither is likely to be considering Bangkok as the next city pair to add to its Catalan connections. Iberia is the #4 carrier at Barcelona, but with a four destination domestic network to Madrid, Léon, Badajoz and Valencia, it would seem unlikely that it would consider a long-haul service from the airport at this stage. The final option is again low-cost, as Norwegian is Barcelona’s fifth largest carrier with 4.9% of weekly seats. Its current 22-destination network from the airport is yet to include any long-haul services, but it will do from June, when it commences operations to Los Angeles, Oakland, New York Newark and Fort Lauderdale. Indeed, the Scandinavian LCC already operates to the Thai capital from Oslo Gardermoen, Copenhagen and Stockholm Arlanda, so Bangkok could well be on its agenda for its new Spanish long-haul base.

Contemplating the Thai end of the route, the potential carriers at Bangkok were considered next. The flag carrier, but now only Thailand’s second largest airline (when not including in-house LCC THAI Smile), behind Thai AirAsia, is still however the biggest airline at the country’s busiest airport, with 32% of weekly seats, ahead of its nearest rivals, Bangkok Airways and THAI Smile, with 8.6% and 8.0% respectively. Although the #1 carrier currently serves 12 European destinations from its biggest hub, as previously mentioned by Aena’s Gracia Lacarra, none of these are currently in Spain. With services to the majority of Europe’s FIGUST (France – Paris CDG; Italy – Rome Fiumicino and Milan Malpensa; Germany – Frankfurt and Munich; and UK – London Heathrow ) nations already operated by Thai Airways, it cannot be long before this gaping network hole is filled, along with the remaining country, Turkey (N.B. – FIGUST nations are the biggest air travel markets in Europe by passengers carried).

When looking at the previous 12 months of search data, the busiest month for potential traffic flows (for both directions on the route combined) is January 2016, with over 130,000 searches, over 61,000 higher than the lowest monthly figure, which was recorded in December 2016 (72,000 searches). The seasonality profile of this search data is more extreme than the last Unserved Route of the Week (London to Kochi) with the low-month traffic representing 54% of the highest month. According to OAG Traffic Analyser, because there is no direct service, the top three connecting options chosen by those passengers who did book travel between Barcelona and Bangkok in the past year indicates that the majority of connecting travellers used Dubai (28%), Doha (26%) and Istanbul Atatürk (9%). Looking at traffic flows on the same city pair but in the reverse direction, Doha (23%) is the hub of choice, beating Dubai (21%) and an improved Atatürk (12%).

Indeed, an O&D that is not served by a non-stop flight will typically display a low purchase rate and low traffic. In this instance Skyscanner’s Travel Insight indicates a monthly average of 11% for the Barcelona to Bangkok route (see graph below). Therefore, if there was a Barcelona to Bangkok route, and if bookings performed in line with the “Skyscanner market average” for direct services at both airports (9.3%), the airline operating this route could immediately expect an improved purchase rate of 17%, without any increased marketing spend. However, with nearly 1.1 million annual searches a daily wide-body service should be immediately viable for the airline selecting to start this potential city pair. 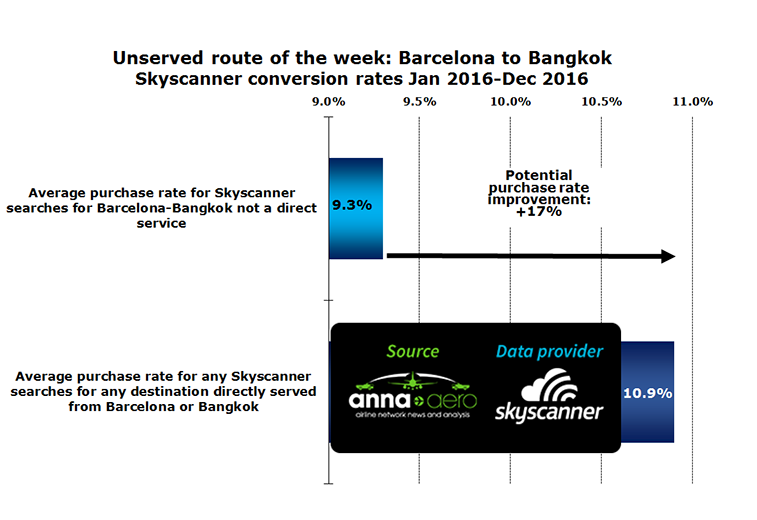