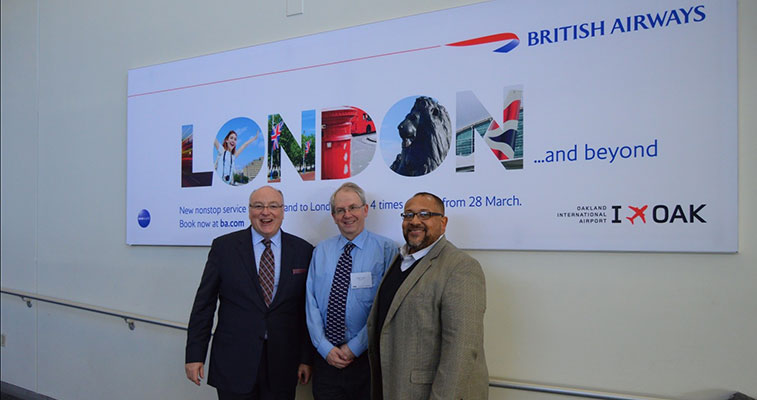 British Airways launched flights to Oakland from London Gatwick on 28 March, a route which the oneworld member will operate four times weekly. Among the first passengers on the inaugural flight was anna.aero’s very own Chief Analyst Ralph Anker (centre), who is seen flanked by John Albrecht, Aviation Marketing Manager, Port of Oakland (left) and Bryant L. Francis, Director of Aviation, Port of Oakland (right), who greeted him on his arrival in California.

Tuesday 28 March was a big day for Oakland International Airport as it welcomed its first European flag carrier – British Airways. The oneworld member has now begun a four times weekly service from London Gatwick, with the airline making the 777-200 its aircraft of choice on the 8,634-kilometre sector. Oakland becomes the carrier’s fourth destination in the US from Gatwick after New York JFK, Orlando and Tampa, meaning Oakland is the first destination on the US West Coast from its second London home. BA also serves 21 US destinations from its main hub at London Heathrow. The Gatwick to Oakland route becomes the third that sees BA going head-to-head with Norwegian, with the latter offering three weekly flights from Gatwick. Oakland Airport kindly invited anna.aero to be part of the route launch celebrations a couple of weeks previous to BA’s inauguration. With invite firm in hand, Ralph Anker, anna.aero’s US-loving Chief Analyst, was booked-up for the inaugural flight from Gatwick, and was soon on his way to Oakland along with around 80 other passengers and 13 crew who were on the first flight, with the delegation being led by Captain Chris Holden. According to the airport, passenger numbers on upcoming flights are much higher and the route is performing ‘above expectations’ according to BA. The airline already serves nearby San Francisco as well as Los Angeles, San Diego and San Jose in California, all from Heathrow.

anna.aero would like to thank John Albrecht, Mona Hernandez and Keonnis Taylor of Oakland Airport for inviting Anker to be part of the inaugural flight celebrations. Now take a look to see how the day’s events unfolded. Flight BA 2279 to Oakland was scheduled to depart London Gatwick at 11:25. The choice of departure gate 13 was a curious one for a new route launch. Disappointingly, neither British Airways nor Gatwick Airport chose to celebrate the new route at the UK end. Pushback from the stand was a couple of minutes early at 11:23, with the flight taking off at 11:37. The inaugural flight to Oakland was operated by a 777-200 (G-YMMB). The routing went over Greenland and some impressive mountains in Idaho. The 10 hour 10 minute flight cruised at between 34,000 and 43,000 feet. Anker took advantage of BA’s IFE and treated himself to two movies, The Accountant (with Ben Affleck and Anna Kendrick) and Café Society (a Woody Allen movie starring Jesse Eisenberg, Steve Carell and Kristen Stewart). The latter appears to briefly feature the Fox Oakland Theatre. The BA check-in area at Oakland Airport is currently undergoing some renovation but that creates an opportunity to put up a big sign welcoming the airline’s new service. Ah the cake! It didn’t take Anker long to find the celebratory cake (which features a cup of tea). In addition, guests on the first London-bound flight were treated to cream tea with scones, strawberries, cream and marmalade. Speeches were made by Bryant L. Francis, Director of Aviation, Port of Oakland (who kindly even name-checked anna.aero in his address), Oakland Mayor Libby Schaaf and Michael Colbruno, President of the Port of Oakland Board of Commissioners. 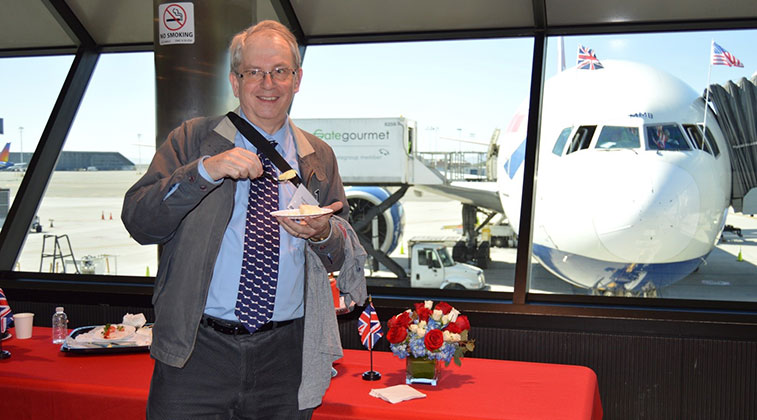 Anker (complete with his BA Concorde tie) made sure he got to try a piece of the lemon-flavoured cake…YUM! Meanwhile in the background the flight crew were still proudly displaying the UK and US flags out of the cockpit windows. Anker was given a souvenir t-shirt to mark the first flight which features a couple of iconic bridges. He also got to pose for a picture with Mayor Schaaf. Flight BA 2278 back to London was scheduled to depart at 16:10. The inbound flight had touched down at 13:59 (significantly ahead of schedule). Departing from Gate 3, push back was on time. And yes, that is the San Francisco skyline you can see in the background, complete with the still under construction Salesforce Tower, which is allegedly the tallest office building in the US west of Chicago. Downtown Oakland is a very attractive place with some great historic and modern architecture and the picturesque Lake Merritt, popular with joggers and dog walkers. It is definitely worth a visit. Downtown (12th Street) is only four stops from the airport using the Bay Area Rapid Transit (BART) metro system, involving just one change at Coliseum. The journey takes around 20 minutes and a one-way fare is just $7.95. To get to downtown San Francisco it’s a couple more stops with total journey time of around 35 minutes.