Traffic between the UK and Iceland passes one million milestone; Edinburgh and Birmingham fastest-growing routes; Belfast City next 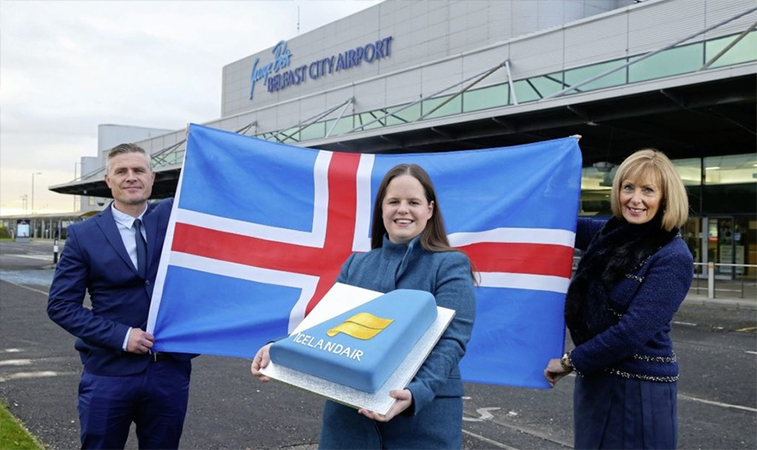 On 2 December Icelandair announced its latest UK destination – Belfast City. The carrier will operate to Belfast three times weekly from Reykjavik/Keflavik, with flights beginning on 1 June. Q400s will be flown on the sector every Tuesday, Thursday and Sunday. Celebrating the announcement at Belfast City with cake were: Ciaran Doherty, Head of Co-operative Marketing, Tourism Ireland; Ellie McGimpsey, Business Development Manager, Belfast City Airport; and Anne McMullan, Director of Marketing and Communications, Visit Belfast. With this launch, Belfast City will become the 12th UK airport to be connected to Iceland.

The market between the UK and Iceland has exploded during the past few years, and 2016 marked the first time in recent history when the passenger count between the two nations passed one million passengers, with just under 1.27 million flying between both counties in 2016. This figure represents a 31% increase in traffic when compared to the year before (0.97 million passengers in 2015), and a growth rate of 66% when compared to the total in 2014 (0.77 million). Since 2009 (the last year to record a drop in traffic – down 9.7%) the average year-on-year growth rate in traffic between the UK and Iceland is 22%. As well as 2009, 2008 was also a year which witnessed a drop in traffic (both highlighted in light green), with passenger numbers falling by over 16% from the total of 425,000 registered in 2007. 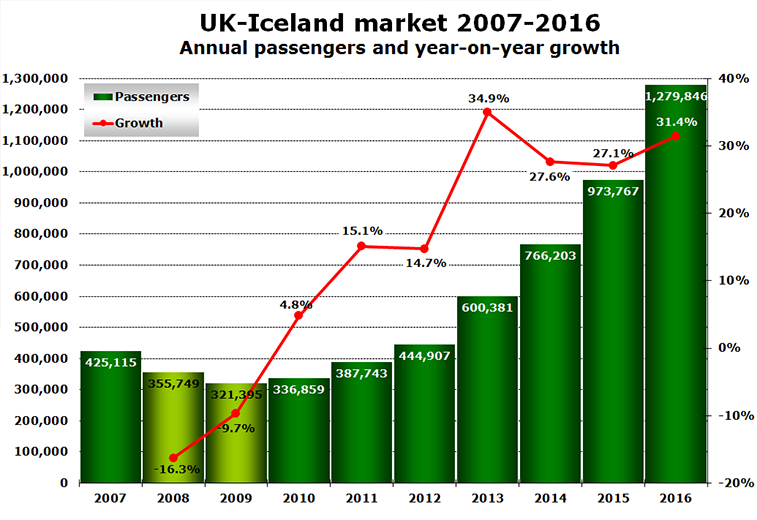 The only airport in Iceland which is connected to the UK is Reykjavik/Keflavik, which welcomed 6.82 million passengers last year. Knowing this total throughput figure means that just under 19% of traffic using the North Atlantic hub was between it and the UK. The UK market share of traffic from Reykjavik/Keflavik however has dropped one point from the 20% share it achieved in 2015. Last year the Icelandic airport registered an impressive increase in passengers, with traffic up by nearly 41%. Looking at routes between the UK and Iceland, the average increase in passengers was 31%, meaning that routes from the UK are not growing as fast as the overall traffic throughput of the Icelandic hub.

The largest route between the UK and Iceland is the 1,934-kilometre connection between London Gatwick and Reykjavik/Keflavik, a route served by Icelandair, WOW air, easyJet and Norwegian (seasonal). The connection from the UK’s second largest airport accounted for 31% of traffic between the UK and Iceland in 2016, down from the 32% share it had in 2015. When looking at the routes between the two nations, the leading airport for growth is Edinburgh, with it seeing a 77% increase in traffic over the past year (helped by WOW air introducing services on 17 July 2016), while following the Scottish capital is Birmingham, with Icelandair seeing a 45% increase in traffic on its route to the UK’s second city. 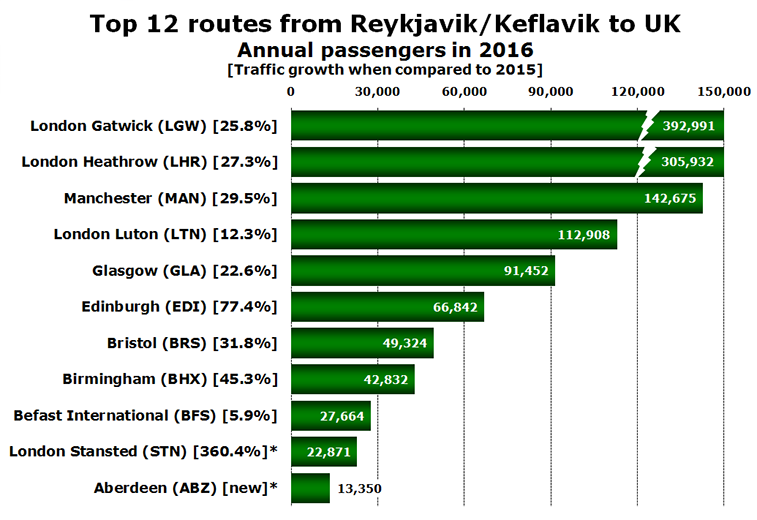 Although the connection between London Stansted and Reykjavik/Keflavik has welcomed a 360% increase in traffic, easyJet’s link between the two airports did not start until November 2015, giving it an unfair result when compared to those registered by Edinburgh and Birmingham. Aberdeen was the latest entrant to the Icelandic market, with Icelandair launching flights in March last year, the first Q400-operated route between the two countries, with Air Iceland operating the route on behalf of Icelandair. A second Q400 service will commence in June this year, with Icelandair, again operated by Air Iceland, starting a connection between Reykjavik/Keflavik and Belfast City, one of the host airports for the imminent Routes Europe conference between 23-25 April.

Icelandair leads market with over 50% of seats

The leading carrier between the UK and Iceland is Icelandair, with it last year operating just under 52% of all seats between the two nations. However, its market share has fallen one point from the 53% majority it held in 2015. Along with opening a new route between Reykjavik/Keflavik and Aberdeen last year, the carrier also increased frequency on its flights to Birmingham and Glasgow, while also introducing 767-300 services to London Heathrow. Along with Icelandair, easyJet (28% of seats in 2016), WOW air (15%), British Airways (4.0%), Thomson Airways (1.5%) and Norwegian (0.7%) also operate flights between the two nations, with the latter two having joined the market last year.

With around 9,500 passengers connecting via Reykjavik/Keflavik in 2016 between Heathrow and Edmonton, it is the leading city pair which operates via Iceland between the UK and North America. Along with this city pair, a further five (all highlighted in light green) are connections which do not have a direct service. The route that is highlighted in red is Glasgow – New York JFK, the fourth most popular connection in 2016. It will welcome a direct service in May from Delta Air Lines when it begins flights on the airport pair. The remaining routes in dark green already have direct flights on the respective city pairs. 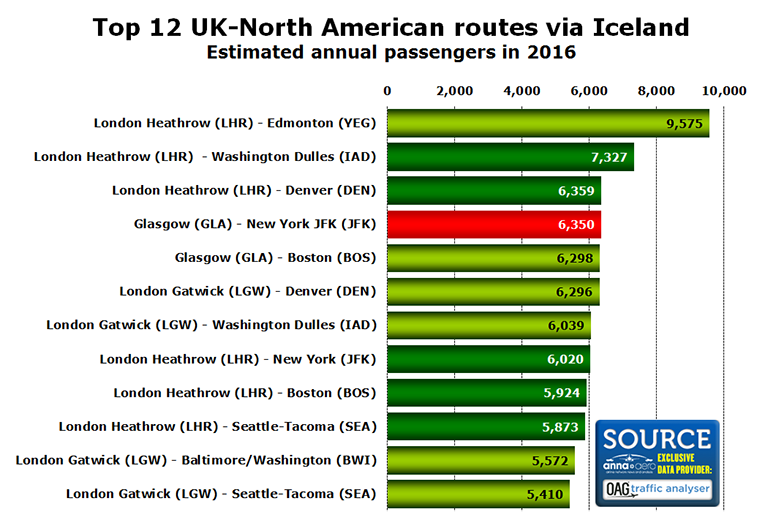 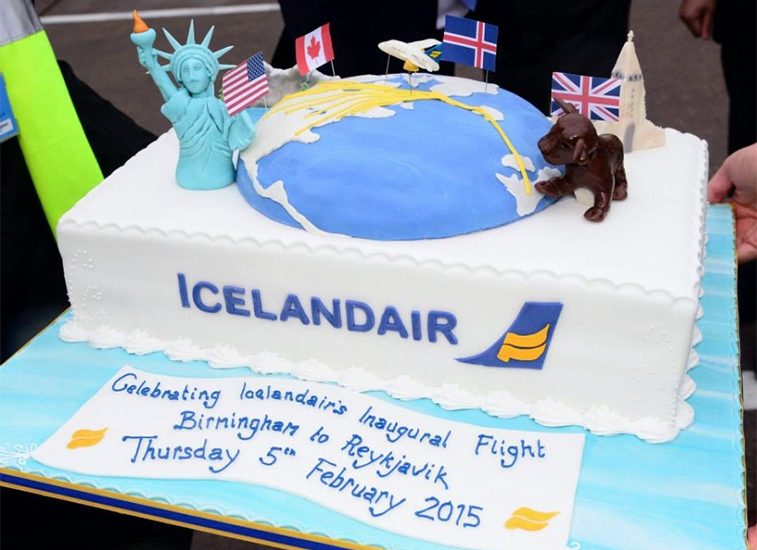 On 5 February 2015 Icelandair launched its fifth route to the UK from Reykjavik/Keflavik after London’s Heathrow and Gatwick, Manchester and Glasgow – Birmingham. Since this launch it has also added Aberdeen flights, with Belfast City planned to join the network in June. Birmingham was one of the fastest-growing routes between the UK and Iceland in 2016, with traffic increasing by 45% on Icelandair’s service to Reykjavik/Keflavik.