Oakland welcomes rapid growth in transatlantic traffic as Norwegian and IAG get feisty; Southwest still #1 with 70% of seats and 30 routes 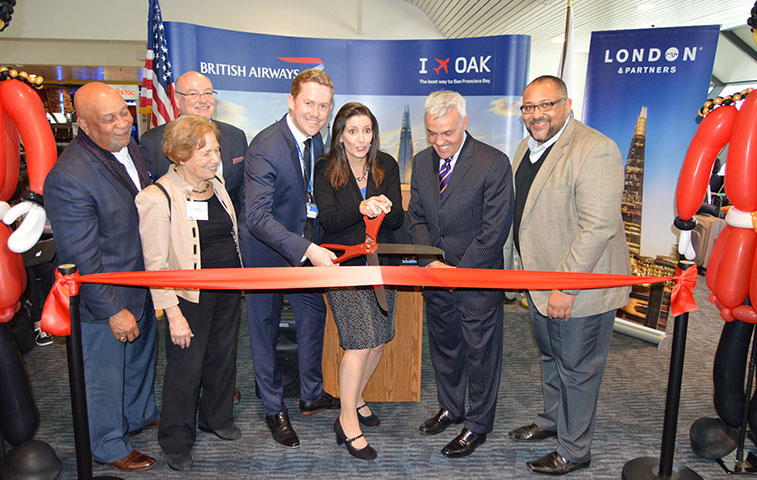 Oakland International Airport in California has just reported its 39th straight month of traffic growth. Along with impressive demand statistics, the airport recently welcomed its first European flag carrier (British Airways) and is seeing massive growth in its transatlantic services. Norwegian has been serving the airport from Europe since May 2014, and this week started non-stop flights from Copenhagen. In June, IAG’s new low-cost long-haul carrier LEVEL and Norwegian will both begin services from Barcelona. 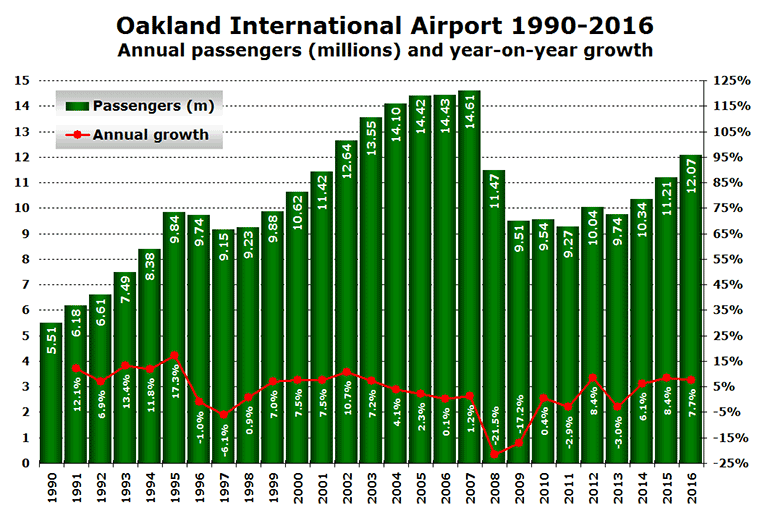 Traffic growth for 39 months in a row

Oakland’s busiest month, but not by much, is July. The airport’s relatively low seasonality results in a score of 1.17 (“Excellent”) on anna.aero’s Seasonal Variation in Demand (SVID) calculator. 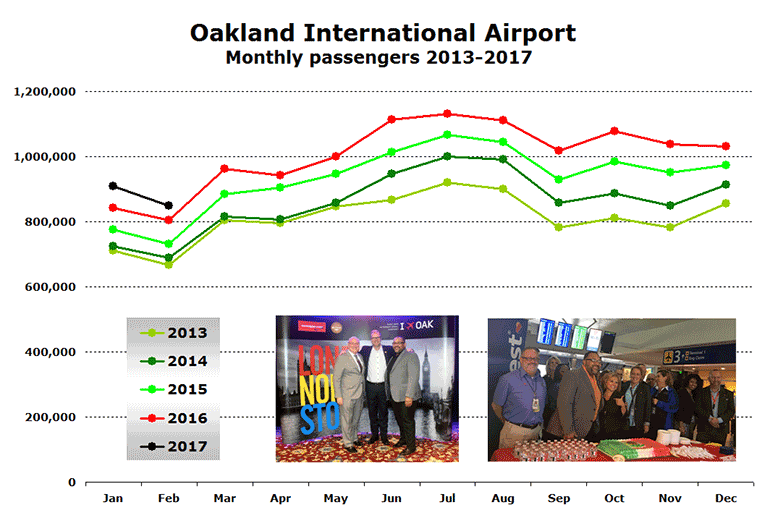 Oakland serving 60 destinations non-stop this summer, 50% more than in S07

While total passenger numbers may still be below the peak of 2007, the number of destinations served non-stop from Oakland surpassed the 2007 figure of 40 in 2012. Since 2013, the options for passengers has grown every summer, with 60 destinations now served non-stop this August according to OAG Schedules Analyser data, 50% more than a decade earlier. Since 2013 the number of domestic destinations has grown from 38 to 48, but international connections this summer have jumped from four to 12 compared with four years ago. Norwegian offers European flights from Barcelona, Copenhagen, London Gatwick, Oslo and Stockholm, with British Airways competing on the London route and LEVEL on the Barcelona link. Southwest Airlines and Volaris between them serve six destinations in Mexico; Guadalajara, Leon/Guanajuato, Mexico City, Morelia, Puerto Vallarta and San Jose del Cabo. Finally, SATA Azores Airlines offers a weekly seasonal service to Terceira. Maybe surprisingly, there are currently no scheduled services to Canada. 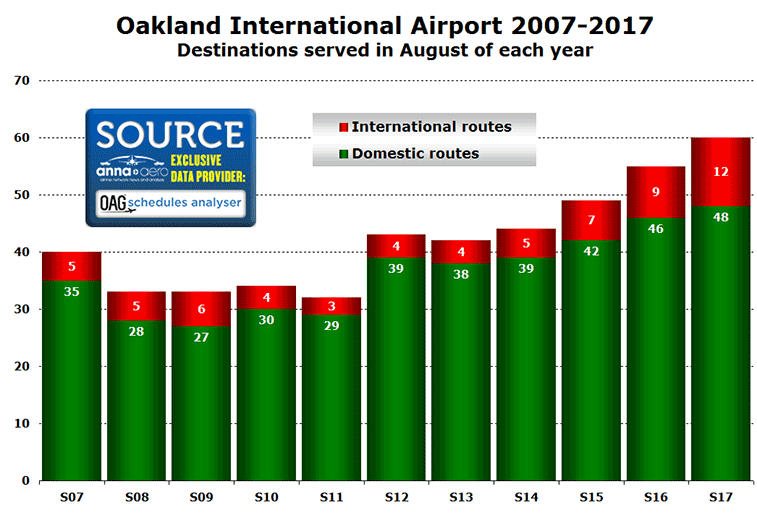 Southwest Airlines has 70% of seat capacity at Oakland; Norwegian #2 for ASKs

Oakland’s biggest carrier by far is Southwest which last year accounted for just over 70% of annual seat capacity at the airport. The legendary LCC serves 30 destinations this summer, up from 27 last summer. New destinations for S17 are Puerto Vallarta and San Jose del Cabo in Mexico, and New York Newark, the latter a seasonal service which is scheduled to start on 4 June, and which will face no direct competition. 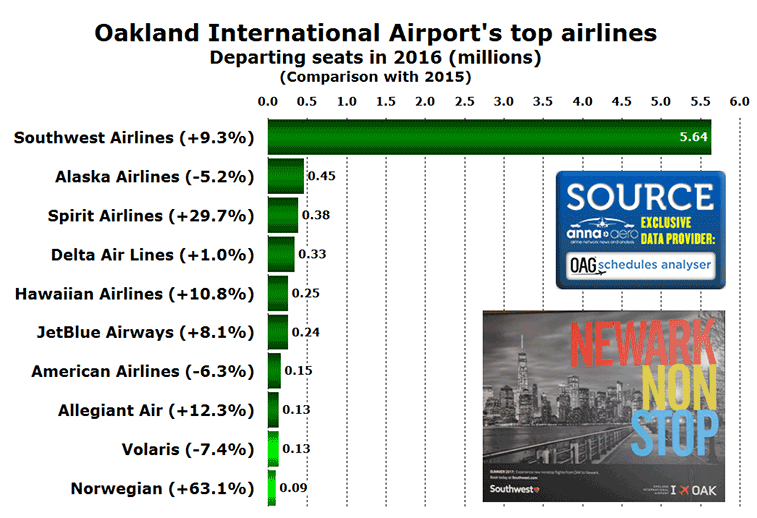 Southwest offers more than 12 times more seats than any other carrier and grew its seat offering at the airport by 9% last year. With 30 routes it also offers three times as many destinations as its nearest rival, Allegiant Air, which offers non-stop service to 10 airports in S17, up from seven last summer. Spirit Airlines has flights to seven cities this summer (up from five last summer), while Alaska Airlines is offering service to six destinations, four of which are in Hawaii.

The only non-US airlines in the airport’s top 10 last year (shown in bright green) were Volaris and Norwegian. Among the top 10 Norwegian was also the fastest-growing. Ranking the airport’s airlines by ASKs (Available Seat Kilometres), which also takes into account sector length, Norwegian ranked fourth behind Southwest, Hawaiian Airlines and Alaska Airlines based on 2016 OAG data. Looking at 2017 Q2 data, Norwegian is up to second, beaten only by Southwest. 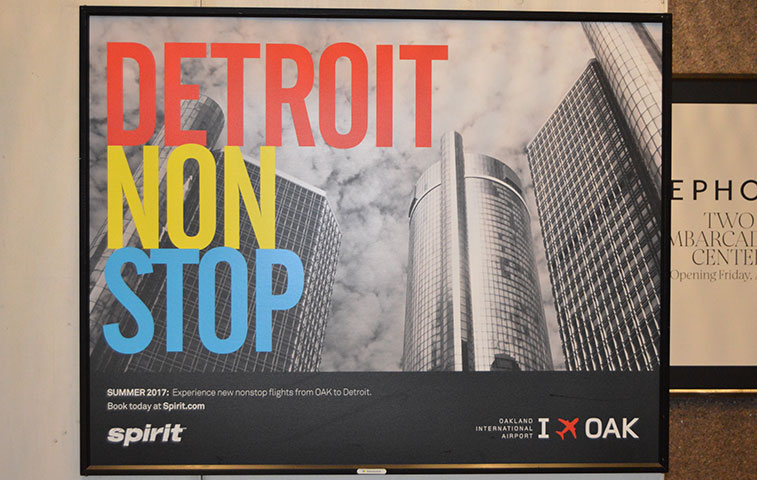 On 25 May Spirit Airlines will begin daily service from Oakland to Detroit, a route not currently served by any other carrier. Along with its new route to Baltimore/Washington, Spirit will this summer be flying to seven US destinations non-stop from Oakland.

Analysis of the leading routes by seats offered in 2016 shows that Los Angeles is by far the #1 destination. The route is served by Delta, Southwest and Spirit, each offering multiple daily flights. The battle for the remaining positions in the top five is much closer, with Las Vegas currently edging out Burbank and San Diego. Six of the top 11 routes are to other airports in California (shown in bright green). Southwest’s entry into the Long Beach market in June 2016 resulted in that route seeing capacity growth of over 80% in 2016. Again, if ASKs are used to rank the destinations, the top five routes in 2016 were Kahului, Seattle-Tacoma, Honolulu, Chicago Midway and then Los Angeles. Stockholm Arlanda even made it into the top 10 at #10. Looking at data for 2017 Q2, London Gatwick now shoots to the top of the rankings, well ahead of both Hawaiian destinations, thanks to the rivalry between Norwegian and British Airways. 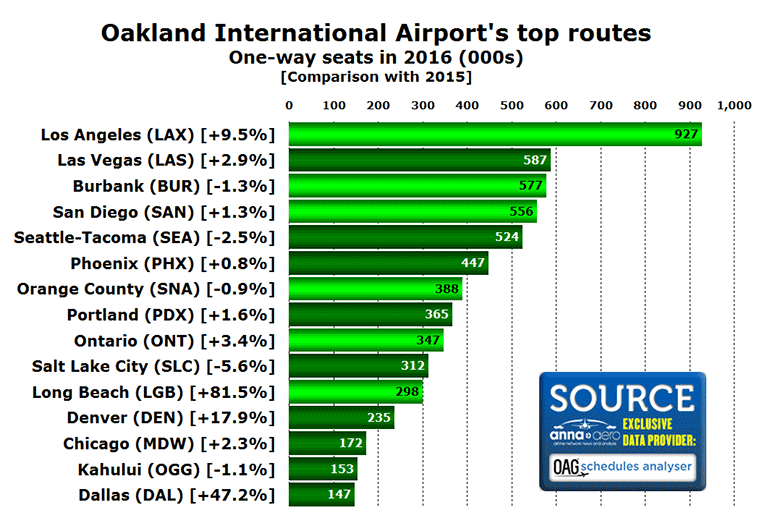 Looking ahead, the airport will welcome new services from Spirit to Baltimore/Washington and Detroit, both starting on 25 May. Detroit is a new destination for Oakland though Southwest already serves Baltimore/Washington with up to two flights per day. As mentioned earlier, June will see LEVEL and Norwegian face off against each other in competing for customers to and from Barcelona, while the same month will also see Southwest debuting its Newark service. Overall, 2017 looks set to be another exciting year for the airport. If it can match or even exceed its passenger growth of last year (7.7%) in 2017 it will reach the 13 million passenger milestone. 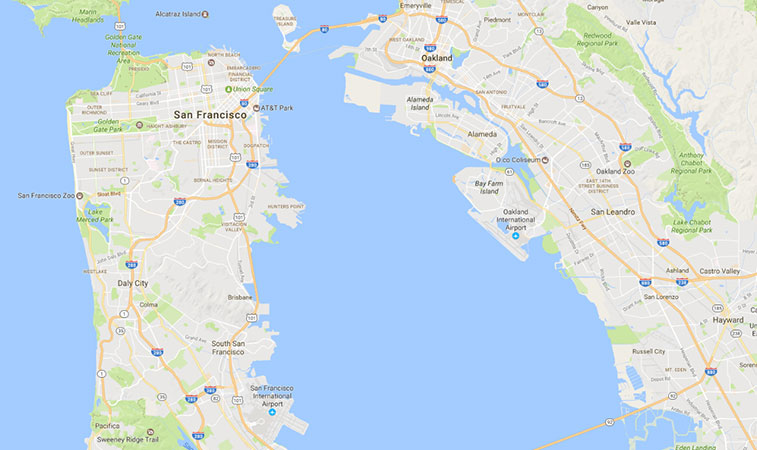