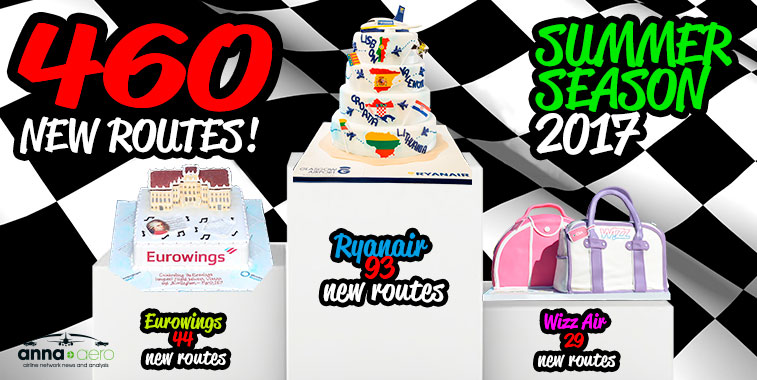 No surprise as to who takes #1 spot on the winner’s podium for S17 route launches – having won it for the last three years – it’s Ryanair! Its tally of 93 new routes beats by some distance the totals it recorded at the same point in 2014 (60), 2015 (38) and 2016 (41). Trailing in the ULCC’s wake were Eurowings and Wizz AIr, which when combined still could not match the Irish behemoth.

Sunday 26 March 2017 represented the start of the northern hemisphere’s “summer season” (S17). This is when airline schedules are significantly adjusted to cope with the seasonal changes in demand, and when European airlines typically launch the bulk of their new routes for the year. According to anna.aero’s comprehensive database, the number of new airline services being launched in the first three weeks of the summer season is just over 460, which is back up to the levels we saw in 2014 and 2015, after something of a slump last year when only around 320 new services were launched. These new services will be operated by over 120 airlines involving airports spread across some 100 countries.

In previous years Ryanair has typically led the way, launching more new routes at the start of the summer season than any other carrier. In the first three weeks of 2014 it was 60 new routes, then 38 in 2015 and 41 last year. However, this year the ULCC has gone into overdrive and started, by our reckoning, 93 new airport pairs. This is more than twice as many as its nearest rival Eurowings with an estimated 44 route launches, over half of which are from its new base in Munich. 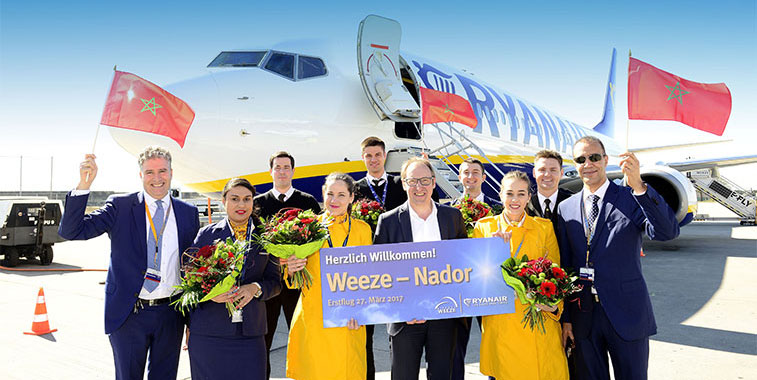 We reckon Ryanair will have launched 93 new routes in the first three weeks of the summer season, but only one of these involves its airports in North Africa. On 27 March the Irish ULCC began twice-weekly flights between Weeze in Germany and Nador in Morocco. The carrier’s 93 new routes involve 80 airports.

Ryanair’s 93 new routes involve 80 airports across Europe and North Africa. While 36 airports get just a single new Ryanair service (it was 35 this time last year), Girona leads the way with nine new routes followed by Naples with eight, Madrid with seven and Krakow with six. The average weekly frequency of the new routes launched is 3.2 flights per week. London Stansted to Copenhagen (21 weekly flights) and Naples to Venice Treviso (14 weekly flights) are the only new routes to be launched with more than one daily flight.

In third place behind Ryanair and Eurowings comes Wizz Air. Seven of its 29 new routes are from its base in Budapest, with a further five from Tuzla in Bosia and Herzegovina. The average weekly frequency of its new routes is just 2.3 with 24 of the 29 new routes launching with just two weekly flights. 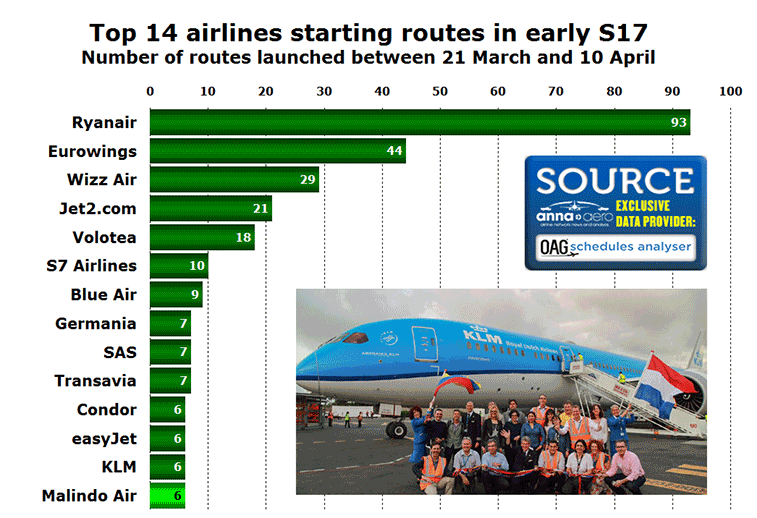 Only one non-European carrier (shown in bright green) makes the top 14 for new route launches at the start of the summer season. Malindo Air, based in Kuala Lumpur, has started six new routes, though two of these are services that require an intermediate stop, such as its new service from Kuala Lumpur to Brisbane via Denpasar in Bali (Indonesia). Last year European carriers accounted for 11 of the top 15 airlines, this year 13 of the top 14.

While the majority of these carriers can be considered (U)LCCs or leisure airlines, there are some notable exceptions such as Russia’s S7 Airlines and two European flag-carriers, SAS and KLM. While S7 and SAS have spread their new routes across a number of bases, all of KLM’s new routes are, not surprisingly, from Amsterdam. This includes new long-haul services to North America (Minneapolis-St. Paul), South America (Cartagena in Colombia) and Africa (Freetown and Monrovia), as well as Europe (Malaga and Milan Malpensa).

Thanks to a significant, rapid network expansion by Eurowings, German airports have seen the largest number of new route launches (92) just edging out Spain (89) and the UK (84). Germany was top of this ranking in 2014 and 2015 but lost out to France and the UK in 2016 who topped this ranking with just 58 new routes each. The other two members of the FIGUS markets (France, Italy, Germany, UK and Spain) take positions four and five this year. Then come the US, Portugal, Russia and China.

Of these you would say that Portugal was punching above its weight given the relative size of the country’s air travel market compared with the other nations mentioned. Of the country’s 29 new routes 15 will be operated by Ryanair, three each by Eurowings and Jet2.com, and two by Germania.

While Eurowings accounts for 33 of Germany’s new routes other airlines keeping German airport marketing folk busy are Ryanair (18 new routes) Germania (seven), Condor and Lufthansa (with six each) and Wizz Air (five). In Spain, Ryanair leads the way with 35 new routes, including some domestic routes which are counted twice as each airport involved is in Spain. Jet2.com is launching 14 new Spanish routes across its two new bases at Birmingham and London Stansted, while Volotea is starting 10 new routes. Locally-based LCC Vueling is starting just three new routes.

In the UK 13 airlines are sharing the 84 new routes being started, with Ryanair (33 new routes) leading the way from Jet2.com (21), Blue Air (six), British Airways and Flybe (with five each). easyJet, maybe surprisingly, has launched just one new route from the UK, a four times weekly service from London Luton to Stockholm Arlanda. Virgin Atlantic Airways has added four new routes including three new US services, two of which launched from Manchester. 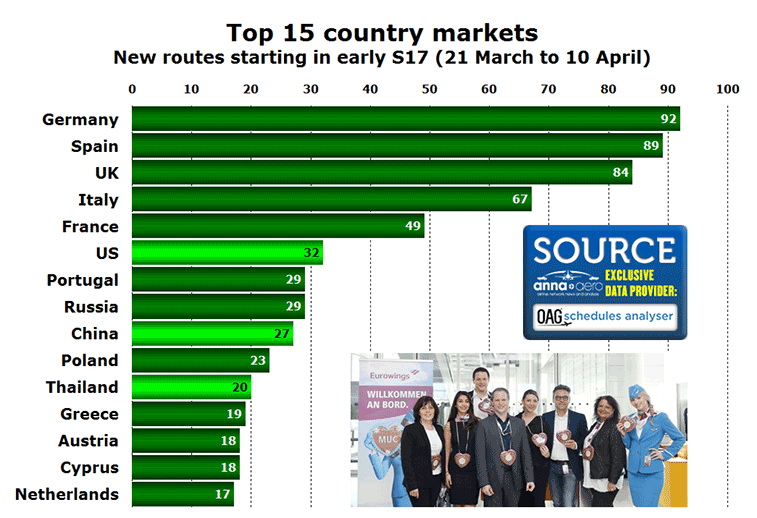 It is worth remembering that operations at many airports outside of Europe are not slot co-ordinated (unlike at most major airports in Europe), meaning that airlines feel less compelled to start new services at the start of the summer season, when demand is often still quite low.

As regular readers of anna.aero will know, even after the peak at the start of the summer season, the number of new routes launched each week around the world will continue to be high until about mid-July. So if your airport or airline is going to start or welcome a new route this summer, please make sure that the route celebrations are well-documented and send us the pictorial evidence, so that we can share the event with our readers. 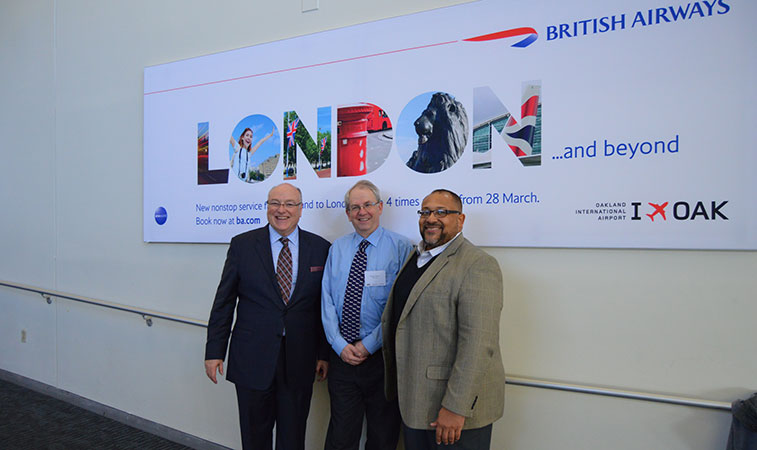 British Airways launched five new routes at the start of the S17 season, only just missing out on a place in the top 14 of airlines for route launches. Four of the routes were from its main base at London Heathrow (to Murcia, Nantes, New Orleans and Tallinn) but the fifth was from London Gatwick to Oakland in California. anna.aero’s very own Chief Analyst, Ralph Anker, was lucky enough to be part of the route launch celebrations for this new service which sees the UK flag carrier go head-to-head with Norwegian.