Emirates introduces A380 to North Africa, South America and Japan Emirates on 26 March celebrated the launch of three A380 destinations, bringing its three-class A380 to Tokyo Narita, Casablanca and Sao Paulo Guarulhos from Dubai. With this deployment, Emirates is the first airline to operate scheduled A380 services into Latin America as well as North Africa. In addition, the Emirates A380 service to Sao Paulo marks the airline’s 10th year of operations in Brazil. It should be noted that Emirates has served Narita before with the A380. With these launches, it means that Emirates now serves 49 destinations on six continents with the aircraft type. Wizz Air announced this week that it will begin two new routes from Košice to Cologne Bonn and Tel Aviv. Seen at a press conference to announce the new routes are: Richard Raši, Mayor of Košice; Sorina Ratz, Corporate Communications Manager, Wizz Air; Tomas Jancus, CFO & Deputy CEO, Košice Airport; and Zdenko Trebula, President of Košice Self-governing Region. Flights to Cologne Bonn will begin on 25 June and operate twice-weekly (Thursdays and Sundays) while Tel Aviv will also see twice-weekly flights (Monday and Fridays), with it scheduled to begin on 23 June. Michael Tmej, CEO of Košice Airport, said of the new route to Tel Aviv: “With the opening of Tel Aviv, there is a bunch of tourism opportunities being opened in both directions. Tel Aviv is considered a year-round holiday destination and thanks to the new connection it will be also much easier for Slovakian pilgrims to visit the Holy Land. On the other hand, we believe that Israeli tourists will explore our wonderful region. For students from Israel studying in Košice, it will be very easy to travel home more frequently, or for their families to visit them here.” During winter, this route will be the only scheduled flight between Slovakia and Israel. 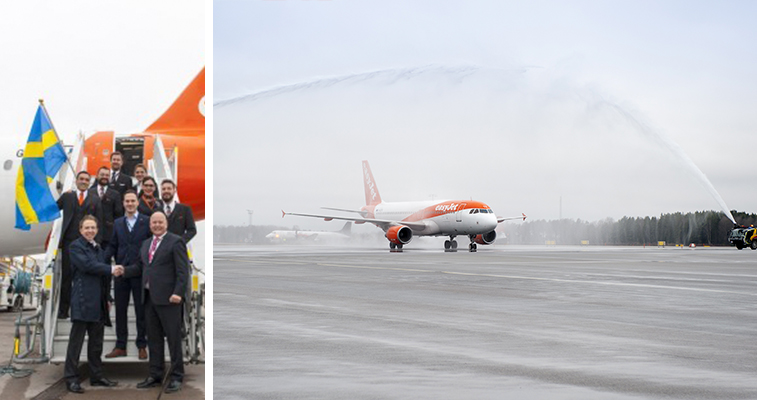 Last week easyJet commenced flights from London Luton to Stockholm Arlanda. Neil Slaven, UK Commercial Manager, easyJet, and Kjell-Åke Westin, Airport Director, Stockholm Arlanda, can be seen shaking hands on the arrival of the airline’s newest route from Luton. The airline has also commenced a new connection from Milan Malpensa to the Swedish capital airport. “easyJet is one of the largest and fastest-growing airlines in Europe, so we are really pleased that they continue to invest in Stockholm. We have had very strong passenger growth at Stockholm Arlanda in recent years, and easyJet’s expansion is clear confirmation that they see potential in the Swedish market,” said Westin. Both routes will be flown four times weekly. Ryanair has recently commenced flights from Girona to Oradea in Romania, with the Spanish airport celebrating the launch with an impressive cake. Flights on the 1,616-kilometre sector, which launched 26 March, will be flown twice-weekly (Wednesdays and Sundays) on Ryanair’s 737-800s facing no direct competition. 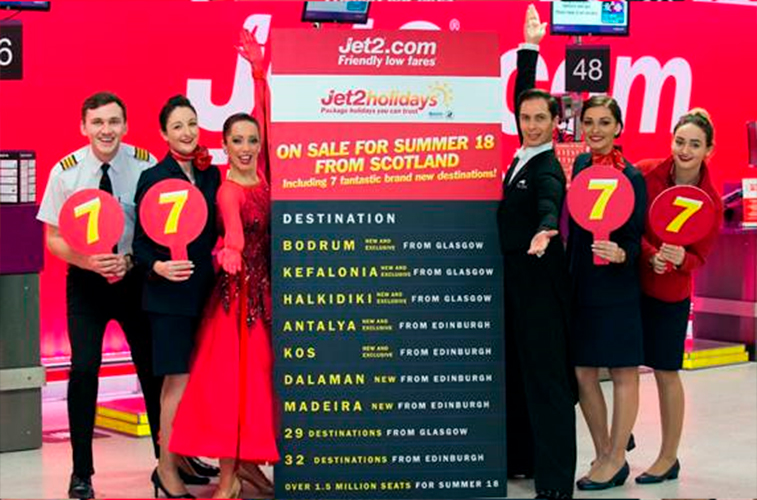 This week Jet2.com announced its S18 programme from Edinburgh and Glasgow which includes seven new routes. Jet2.com’s Kurt Smith, Bethany Robinson, Scottish Ballroom dance champions Hilary Mouat and Tibor Póč, Cheryl Freeman and Hayley O’Hagan can be seen announcing the seven new Jet2.com routes which are: Edinburgh to Antalya, Kos, Dalaman and Funchal, plus Glasgow to Bodrum, Kefalonia and Thessaloniki. Steve Heapy, CEO of Jet2.com and Jet2holidays, said of the news: “This will be our biggest summer programme yet from our bases at Glasgow and Edinburgh airports, with more seats and hotels than ever through our award-winning airline and holiday operator. Such sustained growth is only possible by looking after our customers, which shows that our continued investment into offering great value package holidays and family friendly flights is working.” On 25 March Delta Air Lines returned to Brussels with its route from Atlanta after a one-year hiatus, with the Belgian capital airport celebrating its return with cake and a water arch salute. The route will be flown by the SkyTeam carrier daily on its 246-seat 767-400s. The carrier also links Brussels to New York JFK. On 3 April Pegasus Airlines celebrated its 10-year anniversary of flights to London Stansted. Seen celebrating the anniversary at Stansted are: Ulrike Schmitt, Passenger Service Agent; Ceyda Sara Pekenc, Managing Partner, Redmint – Pegasus Airlines UK PR & Marketing Representative; Raphaela Kleinen, Pegasus Airlines UK Representative; Daniel Gallo, Customer Services & Security Directors, London Stansted Airport, Mats Sigurdson, London Stansted Airport’s Aviation Director. Sigurdson commented on the occasion by saying: “On behalf of everyone at London Stansted, I’d like to offer my congratulations to Pegasus on a fantastic and very successful ten years at the airport. We are very proud to have them as a highly valued and key partner at the airport and very much look forward to working with them for many years to come as they continue to develop and grow their highly popular services from Stansted.” The airline currently provides 17 weekly flights between Istanbul Sabiha Gökçen and Stansted along with three weekly flights from Izmir. On 4 April easyJet celebrated its five-year anniversary at London Southend. Since its launch in April 2012, easyJet has flown more than four million passengers on over 32,000 flights from Southend. On hand to celebrate the anniversary were Neil Slaven, easyJet’s UK Commercial Manager; James Duddridge, MP for Rochford and Southend East; and Glyn Jones, CEO of Stobart Aviation (which owns London Southend Airport). Also on hand to celebrate the anniversary were cousins Darcy Page and Cooper Page Martin from Rochford, grandchildren of easyJet crew member Angela Page. “We’re delighted to be celebrating our fifth year at London Southend Airport. Since we launched our first flight from Southend to Belfast International five years ago, we’ve flown over four million passengers and have almost doubled the number of destinations we now operate from the airport. We’ve made travelling easy for the people of Southend and the surrounding areas across Essex and East London with affordable flights to 15 destinations across Europe,” commented Slaven. Along with welcoming Emirates’ inaugural A380 service from Dubai, Sao Paulo Guarulhos this week also welcomed Air China’s first 787-9 operation. The carrier is now using this aircraft type on its route from Beijing, with it also receiving a water arch salute on arrival at the Brazilian airport.