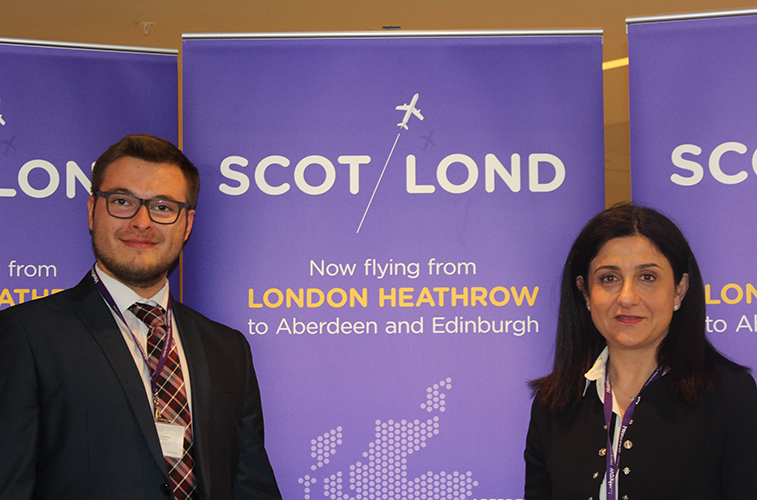 On 27 March Flybe celebrated the start of services to London Heathrow from Edinburgh and Aberdeen, routes it had commenced the previous day. Seen promoting the new routes at Heathrow are anna.aero’s Assistant Editor Jonathan Ford and Flybe CEO Christine Ourmieres-Widener. While enjoying a splendid Scottish-themed breakfast at Heathrow after the arrival of the first flight from Edinburgh, Ford caught a few moments with Flybe’s new CEO to see how she is settling into her new role, and what she brings to the UK’s leading domestic airline.

Flybe took a major step in enhancing its UK regional network on 26 March by commencing services to London Heathrow from Edinburgh and Aberdeen. The following day Flybe celebrated its launch of flights to Europe’s busiest airport by holding a celebratory breakfast at Heathrow’s The Gorgeous Kitchen in Terminal 2, the terminal that Flybe will be operating from. Having flown down from Edinburgh on the morning of 27 March with Flybe CEO Christine Ourmieres-Widener, anna.aero’s Assistant Editor Jonathan Ford caught a moment to introduce himself to Flybe’s new CEO, and to see how Ourmieres-Widener is settling into her new role at the helm of the UK’s leading domestic carrier.

Ourmieres-Widener is no stranger to the airline industry. Taking-up her new role as the CEO of Flybe by leaving her position as Chief Global Sales Officer, American Express Global Business Travel, Ourmieres-Widener from 2010 until 2015 was the CEO and Board Member of Dublin-based CityJet. Before taking the helm of CityJet, Ourmieres-Widener also had leading positions as GM UK & Ireland, plus VP & GM US for the Air France–KLM Group. So she brings with her a lot of experience to Flybe. So how has she settled into her latest position since taking over in January?

anna.aero: “Now being based in Exeter, which is quite different to where you were living when you worked at American Express, what is your favourite part about living down in Devon?”

Christine Ourmieres-Widener: “I now have a small place in Exmouth. For me I love the sea and having the pleasure in the morning to wake up and just look at the sea from my home, I love it. It’s just a space where I can relax, such a difference from where I have moved from.”

aa: “What is the difference to being at Flybe compared to when you were at CityJet before?”

CO-W: “It feels very good to be back in aviation. As you may know I’ve spent most of my career in aviation and it is a real passion. When I had the opportunity to come back, I could not resist, so it is a pleasure to be back. I think that aviation is always in evolution and constantly changing, so to come back and see what has happened, and what is now happening in the UK and Irish market, it enables me to bring another direction to the company. It is an amazing opportunity.”

aa: “How has your previous position at CityJet helped you at Flybe?”

CO-W: “I think that you can bring with your experience a few things, but you’re in a different airline, and Flybe is different to CityJet. For instance it is a much bigger airline. It is the largest single operator in the UK domestic market with 53% of the flights. In the UK Flybe is about connecting the regions so it is a different business model to CityJet, with quite a successful core market. For instance Flybe is the leading operator in relation to movements at Birmingham and also Manchester, so Flybe is a very significant player in the UK. I mean you can bring experience in regards to operations and commercial etc, but sometimes you have to learn something new when taking over. I’m fortunate therefore to have a strong team behind me who are very professional, with different experience and diversity. The experience they are bringing to the team is also very important as well as my experiences.”

aa: “In the past 12 months we have seen many changes in Flybe’s structure, including intra-European flying along with a new base, operated by Stobart Air, about to begin out of London Southend. What factors have led to Flybe making these strategic manoeuvres?”

CO-W: “Flybe is now in control of its growth. It was announced in our end-of-year results that Flybe is moving from a significant growth strategy to a more consolidation strategy. Before, from decisions made by others, Flybe was growing too fast and it was struggling to keep on top of its growth. I think that any decision that we are taking now is about profitable growth and making sure that as a network we fly the routes that work well for us. We are now starting to consolidate, helping to bring a positive impact on the bottom line. So the decisions going ahead will very much be about the economic gain. We have a very strong network already, but we have been optimising the network now for the start of the winter season. So the summer season is almost gone and we are looking at having a more efficient network for winter, particularly about where we fly and what is best for giving back to Flybe’s results.”

aa: “As well as this consolidation, we’ve seen that the airline has opened a new crew base in Düsseldorf. So what is it like for Flybe to now have bases outside of the UK?”

CO-W: “It is very new for us because as a base, officially opened in March, we are still in the discovery process to see how having a foreign base works for the airline. So we will evaluate the experience to see which are the next steps to take, but it is a very positive development for Flybe and a new experience and so far it is going well with the new crews we have based in Germany.”

aa: “At the start of last summer Flybe began routes from Hannover to Lyon and Milan Malpensa, with these being the first non-UK routes that Flybe has launched. Only one of these is now operating. So could we see non-UK flying from Düsseldorf?”

CO-W: “We do not have any plans so far to open inter-European routes in our network, but we are always studying the opportunity to see what new routes could be launched from our new German base.”

aa: “Coming into Heathrow Flybe has taken up slots made available by Virgin Atlantic Airways’ Little Red operation which folded a few years ago. How long has it taken Flybe to make the decision to take these slots up and start Edinburgh and Aberdeen routes?”

CO-W: “It is a bit difficult for me to answer because I am quite new to the airline. It was already decided when I joined that Flybe would begin flights to Heathrow, but I understand the decision was made in the middle of last year. We have a very efficient board to make these decisions so I can tell you that the decision would have been made very quickly once the business opportunity was on the table.”

aa: “With the slots that were freed-up to start these new routes to Edinburgh and Aberdeen, could we see more services connecting Heathrow to further destinations in the UK once further slots become available?”

CO-W: “We will study the opportunity but it will probably mean we need more slots which will highly likely only come available once a new runway is built here at Heathrow. We will work with Heathrow to see what business cases could be successful for adding more domestic routes. I mean it is a different business model to other routes that we would look to start. At the moment Heathrow is connected to eight UK cities compared to Amsterdam for example which is connected to around 25. So there is definitely an improvement to be had in connecting the UK’s leading airport to more domestic points, and Flybe would be more than happy to work with Heathrow to play a role in this development.” 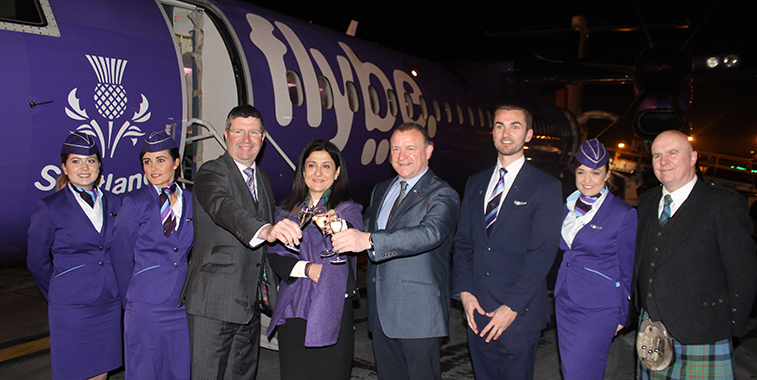 Flybe CEO Christine Ourmieres-Widener was joined by Edinburgh Airport CEO Gordon Dewar (third-left) and Drew Hendry MP, SNP Spokesperson for Transport (fourth-right) to celebrate the start of the airline’s new route from Edinburgh to London Heathrow. Ourmieres-Widener has hinted that Flybe would be more than happy to work with Heathrow to open up further domestic routes from the UK capital airport once slots are made available.