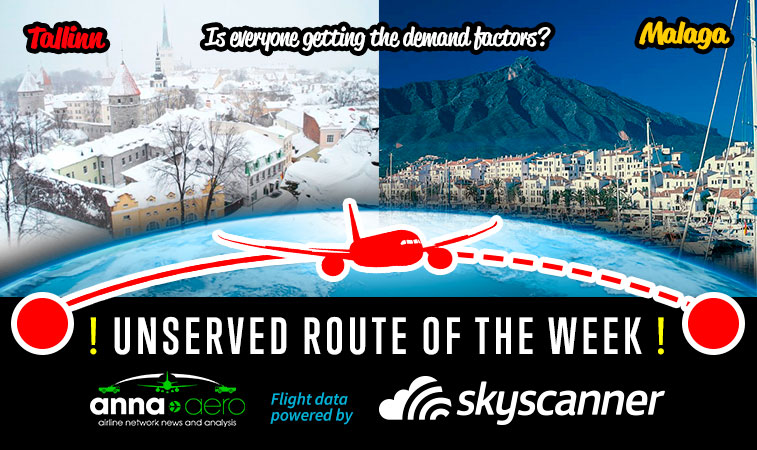 Why start a new route between Tallinn and Malaga? Tallinn’s Old Town is one of the best preserved medieval cities cities in Europe and is listed as a UNESCO World Heritage Site. Puerto Banús is a marina and shopping complex located close to Malaga on the Costa del Sol. It is one of the largest entertainment centres in the region with five million annual visitors, and is popular with international celebrities. Need any other reasons to link these two cities – didn’t think so!

With nearly 155,000 searches in the last year, a potential city pair from Tallinn to Malaga has been identified as this week’s “Skyscanner-anna.aero Unserved Route of Week” – a powerful analysis based on aspirational data captured from the Skyscanner.net flight comparison site used by +60 million unique visitors per month. “Malaga is increasingly popular and a steadily growing destination for Estonians. In fact, it is in our top two unserved holiday destinations,” says Thea Gents, Network Development Manager at Tallinn Airport. 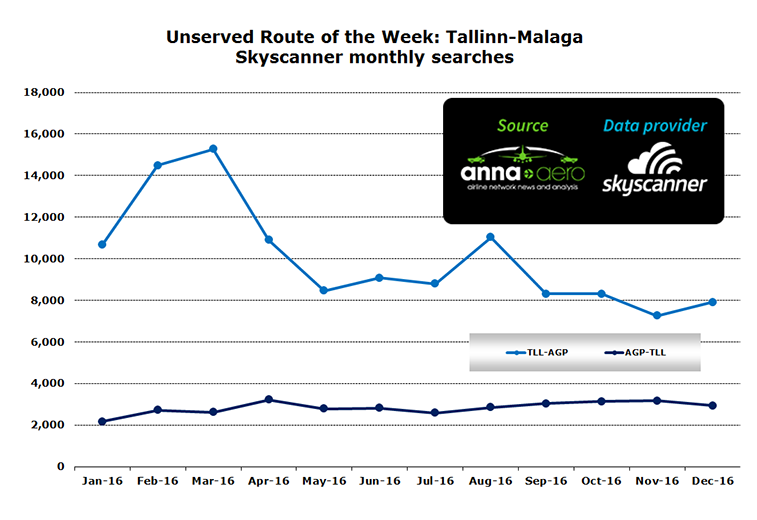 anna.aero recommends Ryanair or Norwegian to net this route

Skyscanner demand on this week’s unserved route shows a massive bias towards the Estonian end of the city pair, with a 78/22 split, so on this basis we looked at potential carriers at the Tallinn end first. With the absence of a flag carrier since Estonian Air’s demise in November 2015, several entities raced to fill the void, resulting in Nordica becoming the biggest carrier at the airport, commanding 24% of weekly seats according to OAG data for the week commencing 4 April. The airline currently offers 10 non-stop services from Tallinn, all operated by CRJ 700s and CRJ 900s, none of which are Spanish services. Indeed Nordica’s longest sector is the 1,588-kilometre service to Brussels, less than half of the distance required to get to Malaga (around 3,300 kilometres). On this basis, a Spanish service is perhaps operationally beyond Nordica’s reach at the moment.

Tallinn’s second largest airline is airBaltic which holds an 18% share of weekly seats, ahead of Finnair in third, with 10% of weekly seats. Unfortunately, neither is likely to be considering Malaga as the next city pair to add to its Estonian connections. airBaltic presently flies to six destinations from Tallinn – namely to Riga, Vilnius, Berlin Tegel, Amsterdam, Paris CDG and Vienna – so given this limited network perhaps a service to Barcelona or Madrid in Spain would be considered before a leisure destination like Malaga. Finnair’s only service to Tallinn is its 43 times weekly operation to its home-hub in Helsinki. Spain is a relatively untapped market from the Estonian capital, with just twice-weekly services to Girona (Ryanair), as well as twice-weekly Tenerife South and weekly Fuerteventura operations (both SmartLynx Airlines).

Contemplating the Spanish end of the route, the potential carriers at Malaga were considered next. The market is dominated by LCCs, with the top four carriers commanding over 53% of combined weekly seats. Ryanair is top-dog, with 23% of weekly seats, well ahead of its nearest rivals, easyJet (12%), Vueling (11%) and Norwegian (8.8%). The #1 carrier currently serves 55 European destinations from its 11th biggest hub, with seven sectors to Nordic destinations from Malaga – to Copenhagen, Billund, Stockholm Skavsta, Oslo Torp, Gothenburg, Stockholm Vasteras and Haugesund. Indeed the ULCC is already present at Estonia’s capital city airport, offering 15 weekly flights to six destinations (including Girona, as previously mentioned).

Looking further down the list of potential carriers, easyJet currently operates no services to the Nordic countries from Malaga, while Vueling offers just one (Copenhagen). The fourth largest airline, Norwegian, is unsurprisingly prominent in the region, with flights to 10 Nordic cities from Malaga. As a result, it joins Ryanair as being the most likely to consider a Tallinn route from the Spanish city at this stage.

When looking at the previous year of search data, the busiest month for potential traffic flows (for both directions on the route combined) is March 2016, with nearly 18,000 searches, over 7,000 higher than the lowest monthly figure, which was recorded in November 2016 (10,500 searches). The seasonality profile of this search data is slightly less extreme than the last Unserved Route of the Week (Barcelona to Bangkok) with the low-month traffic representing 58% of the highest month. “There is high demand from April-October for holidays in Malaga, with steady traffic in shoulder months,” adds Gents.

According to OAG Traffic Analyser, because there is no direct service, the top three connecting options chosen by those passengers who did book travel between Tallinn and Malaga in the past year indicates that the majority of connecting travellers used Helsinki (23%), Stockholm Arlanda (17%) and Frankfurt (15%). In total, 34 different airports were used by travellers looking to fly between the two destinations.

Indeed, an O&D that is not served by a non-stop flight will typically display a low purchase rate and low traffic. In this instance Skyscanner’s Travel Insight indicates a monthly average of 8.3% for the Tallinn to Malaga route (see graph below). Therefore, if there was a Tallinn to Malaga route, and if bookings performed in line with the “Skyscanner market average” for direct services at both airports (8.5%), the airline operating this route could immediately expect an improved purchase rate of 2.4%, without any increased marketing spend. However, with nearly 155,000 annual searches a three or four times weekly service should be immediately viable for the airline selecting to start this potential city pair. “There is high demand for leisure routes from Tallinn, with a proven stimulation up to 300%,” concludes Gents. 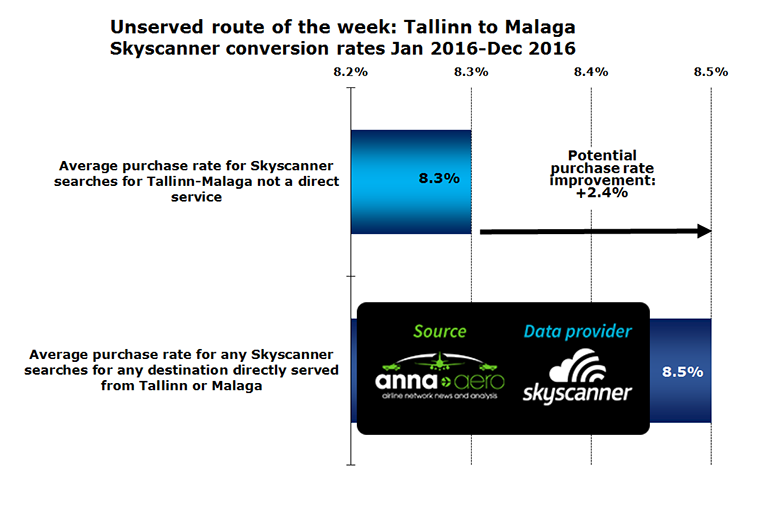