Belfast airports welcomed a record 7.81 million passengers in 2016; international traffic doubles since the turn of the Millennium 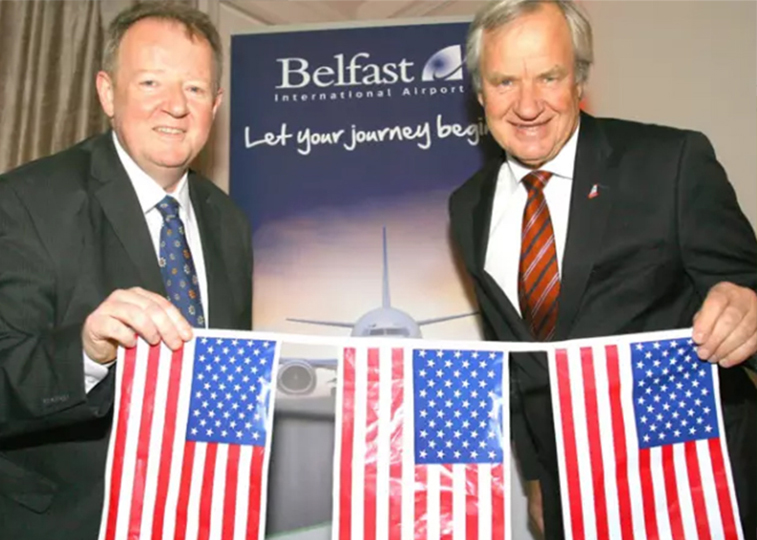 Earlier this year Norwegian announced that it will begin direct flights to the US from Northern Ireland this summer, replacing the void left by United Airlines’ New York Newark route which ended in January. Seen announcing the new services to Stewart and Providence, which will be flown from Belfast International, are Belfast International Airport MD Graham Keddie, and Norwegian CEO Bjørn Kjos. This will be the airline’s first flights from Northern Ireland.

Northern Ireland, home to the Giant’s Causeway, Titanic, Game of Thrones and Liam Neeson (quite the list), is also home to approximately 1.8 million people, around 2.8% of the total population of the UK. Of those 1.8 million, 20% live within the city of Belfast, host of this year’s Routes Europe 2017. anna.aero’s Editor Marc Watkins was fortunate enough to travel to Belfast last month to see what delegates can expect to see from this vibrant city when attending the conference later this month.

Belfast is served by two airports – Belfast City and Belfast International – with both combined welcoming 7.81 million passengers in 2016, the highest figure on record for both airports. The nearest that both have come to this total was 2008, with the airports seeing 7.79 million passengers that year (19,000 fewer passengers than in 2016). With traffic combined, Belfast in 2016 was the sixth-largest city in the UK in regards to total passengers, behind London (162.3 million passengers – Heathrow, Gatwick, Stansted, Luton, City and Southend), Manchester (25.6 million), Edinburgh (12.3 million), Birmingham (11.6 million) and Glasgow (9.99 million – Glasgow and Prestwick). It sits just ahead of Bristol (7.60 million).

In 2000 4.44 million passengers travelled through Belfast’s two airports. Last year it was 7.81 million, meaning that since 2000 traffic has grown by 76%. Back in 2000 the passenger split between the two airports was 71% International and 29% City. In 2016 International is home to 66% of passengers and City 34%, meaning that since the turn of the Millennium, City has steadily increased its market share of Belfast traffic by five points. 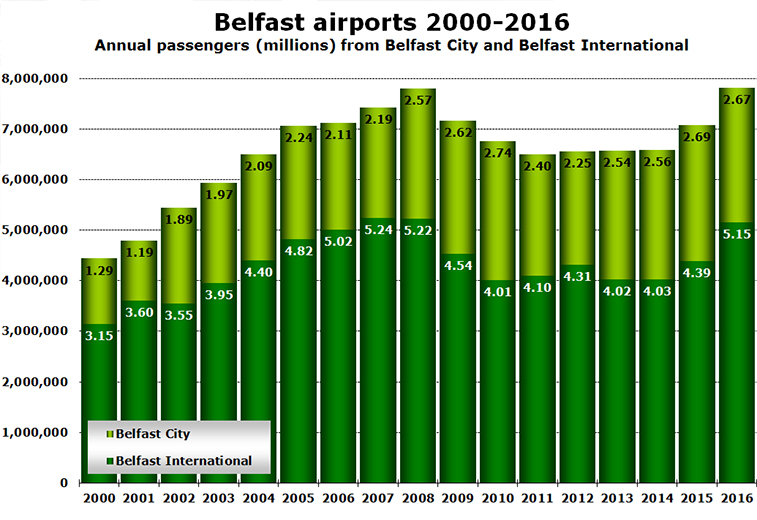 When taking a closer look at statistics for both airports, 5.97 million passengers flew on domestic services from Belfast last year, approximately 76% of all traffic. Of those 5.97 million, 60% (3.56 million) flew from International, with the larger of Belfast’s two airports increasing its market share of domestic traffic from 54% in 2015. When looking at the international market, 86% of the 1.85 million passengers that travelled on non-UK routes from the city in 2016 chose International as their airport of choice, with the remaining 14% flying from City. For the latter airport, this is the biggest share of the international market that it has recorded in recent history, growing from 3.3% just seven years ago. Since 2000 international passengers have doubled from Belfast, with the city having welcomed only 0.93 million non-UK passengers during the first year of this decade.

2016 was the best year on record for International Airport since 2000 in relation to traffic growth, with it seeing passenger numbers increasing by over 17%, no doubt helped by Ryanair expanding its operations from the airport. The story is slightly different for City, with it seeing traffic drop 1% last year. Overall traffic from Belfast increased by 10% in 2016, the first time that both airports combined have recorded double-digit growth since 2002 (14% increase in traffic).

Last year Ryanair began services from its new base at International to Gatwick, initially with four daily flights. As a result of its entry onto the route, breaking easyJet’s monopoly, it has climbed to become the leading domestic route from Belfast, overtaking the link from City to Heathrow, a connection served by British Airways and Aer Lingus. Overall traffic between International and Gatwick grew by nearly 82% in 2016. Along with this connection, a further five routes (all highlighted in light green) welcomed double-digit growth last year, with City to Edinburgh (20% growth – flown by Flybe) and International to Birmingham (16% – easyJet) rounding out the top three fastest-growing services. Of the top 15 routes only one, City to Manchester (highlighted in red) saw a drop in traffic, with it reporting a 3.6% decline in passengers. In total 30% of overall traffic from Belfast in 2016 flew on routes to London. 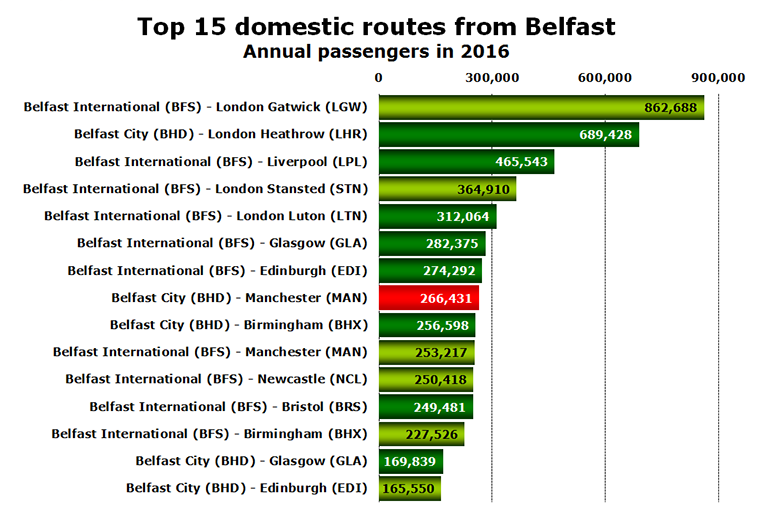 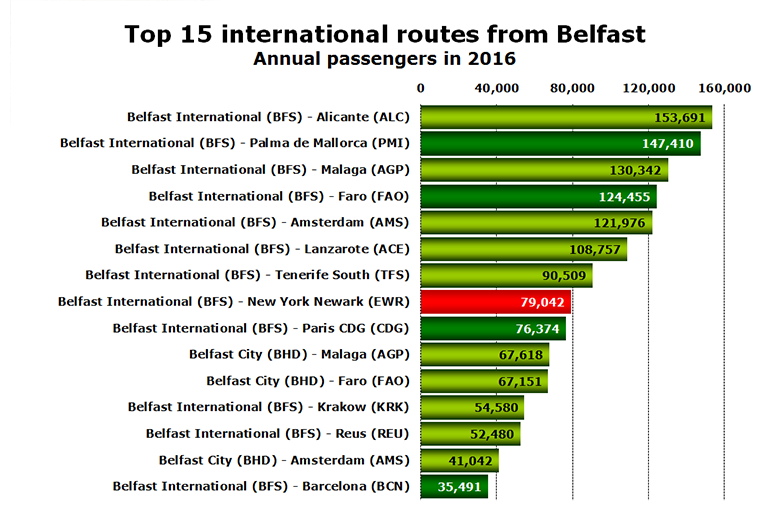 One route which stands out from the top 15 international routes is United Airlines’ connection to International from New York Newark (highlighted in red). It was the eighth-largest international route from Belfast in 2016. However, the carrier has now pulled its service from the Big Apple. It means Heathrow, Edinburgh, Manchester, Birmingham and Glasgow are now the only airports in the UK served by the Star Alliance member.

In 2017 easyJet will overtake Flybe to become the city’s largest airline in relation to weekly flights. Although easyJet’s operations from the city are quite static when compared to last summer (two more weekly flights), Flybe’s drop in movements (down 14%), means that Europe’s leading regional airline drops to second. Flying into third place, overtaking Aer Lingus, is Ryanair which will offer 60 weekly flights from International this summer to 13 destinations. What is interesting to note is that although Ryanair is now operating more routes from Belfast this summer when compared to its 2010 operation (13 routes in 2017 compared to five from City in 2010 – Bristol, East Midlands, Glasgow Prestwick, Liverpool and Stansted), the amount of weekly flights it is offering is still 33% lower than the 90 it flew seven years ago. The reason for Ryanair closing its base at City Airport was due to the planned runway extension being delayed. The airline had stated it would fly to European destinations from the airport if the runway was extended. However, the airline returned to Belfast by opening a base at International instead. 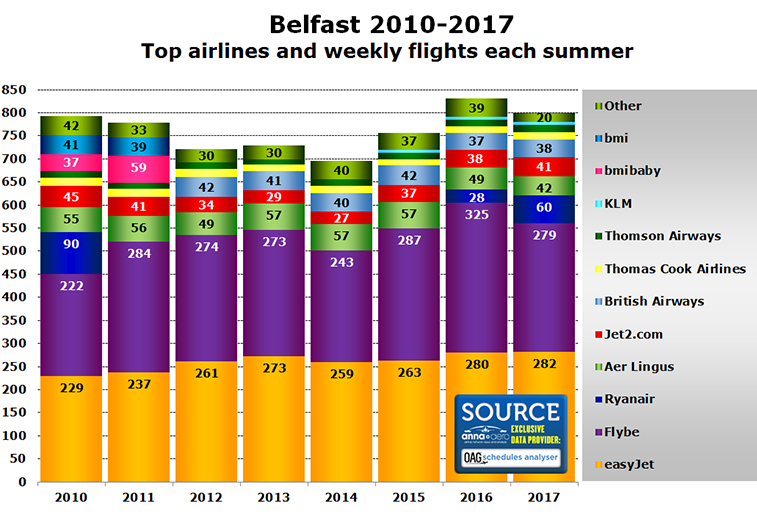 Along with those mentioned in the graph, airlines that fall under the category of other are: Norwegian (five weekly flights – begins 1 July); Eastern Airways (five); Wizz Air (four); Icelandair (three – begins 1 June); and Virgin Atlantic Airways (one). Although 66% of passengers travelling from Belfast go through International, only 54% of weekly flights to the city operate from the airport, with the remaining 46% being from City. Airlines which have been lost from Belfast over the past few years include Brussels Airlines (Brussels – flew in S16) and Vueling (Barcelona – S16), both of which served City Airport.

Welcoming Norwegian and Icelandair to Belfast

Belfast in S17 will welcome two brand new airlines – Norwegian and Icelandair. Norwegian will link International to Stewart and Providence in the US, while Icelandair, operated by Air Iceland, will connect City to Reykjavik/Keflavik. At 1,400 kilometres, the link between Iceland and City will become one of the longest Q400-operated sectors in the world, with airBaltic’s Riga to Brussels connection beating it to top spot according to OAG schedules at 1,432 kilometres. While Norwegian is replacing United in offering non-stop flights to the US, Icelandair will be sure to capture the US market with connections via its North Atlantic hub. With Icelandair’s launch, it will mean that City is now connected to six international destinations. Take a closer look at anna.aero’s recent analysis of the UK – Iceland market to see how traffic has boomed during the past couple of years between the two countries. 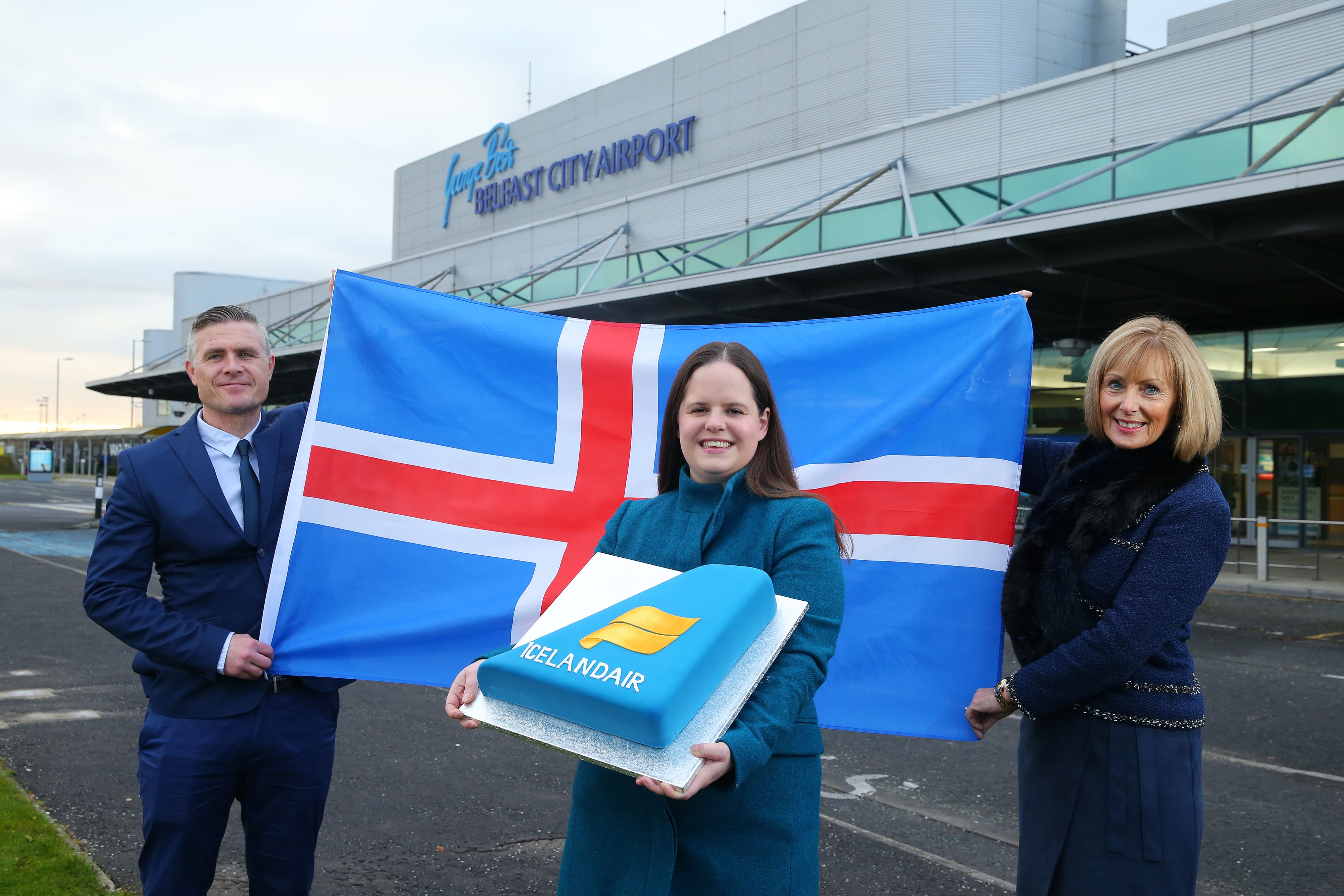 Icelandair will become the next airline to arrive in Belfast, with it scheduled to begin a three times weekly service between Reykjavik/Keflavik and Belfast City on 1 June. At 1,400 kilometres, the link will become one of the longest Q400-operated routes in the world, and brings a sixth scheduled international route to City’s departures board.