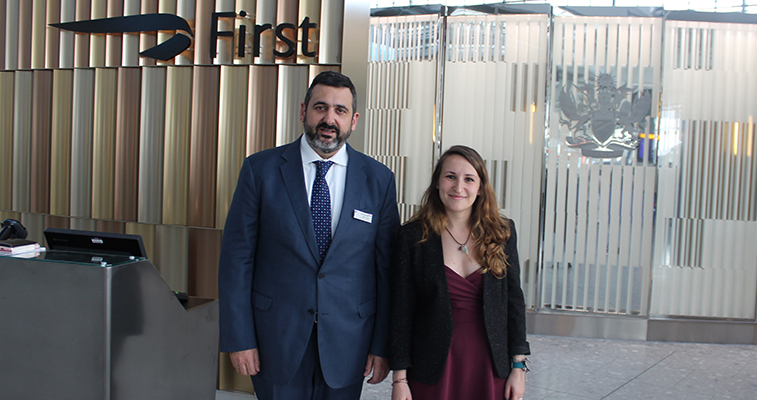 anna.aero’s Marta Dimitrova last week joined British Airways Chairman & CEO Alex Cruz for a tour of the new First Wing at London Heathrow Airport’s Terminal 5. While BA is making several changes to its in-flight experiences, it has also made multiple changes to its route networks from both Heathrow and London Gatwick, while it is also returning to some UK airports this summer with European flights, including Birmingham and Bristol.

anna.aero last week joined British Airways Chairman and CEO Alex Cruz on a special charter flight between London’s Gatwick and Heathrow airports, during which he announced a major investment in improving the customer experience, including a £400 million enhancement to its Club World product and rolling out of in-flight Wi-Fi. Despite the day’s main focus being about the customer experience developments, anna.aero’s Marta Dimitrova was also interested in discovering a little bit more about the airline’s recent network changes from BA’s CEO.

Cruz began his aviation career at American Airlines in 1995, spending half of his 10 years at the group with its travel technology arm, Sabre, in London, working with a range of European airlines. In April 2016 Alex Cruz joined BA as Chairman and CEO, leaving his role as Chairman and CEO of Vueling, an airline which he joined in 2009 after clickair, an airline which Cruz founded in 2006, was merged into the carrier. So before getting into the developments of the BA’s network, anna.aero was curious to know what it was like jumping into the helm of one of Europe’s largest flag carriers from Spain’s biggest LCC.

anna.aero: “What is the difference in being the CEO of British Airways compared to when you were the CEO of Vueling?”

Alex Cruz: “Size matters. There is a huge history of tradition, experience and passion for the British Airways brand, as such the collection of processes and procedures are very aligned with legacy airlines, rather than with newer airlines. I have found tremendous people who are incredibly passionate. I thought I had created an airline from scratch and we were all very passionate about it, but here the passion is even bigger. Overall, the challenge is in the size – the complexity of understanding it and knowing how to work with it, understanding people and processes around it. The big change has been size and complexity and dealing with it, and learning about the business. I come from the airline industry and I know the basics of how to run an airline, and yet, that has prepared me to understand the complexity of the processes. It is extremely exciting, the team is big, the potential and network are huge. I think I am extremely lucky and blessed to have this responsibility to respond to shareholders, of course, the customers and the very demanding employee base, which again have high expectations and are ready to deliver fantastic service.”

BA has made several changes to its network from both Heathrow and Gatwick recently. The biggest route launch from Heathrow came a few weeks ago when BA began service to New Orleans, a connection which means that BA flies to 21 airports in the US from Heathrow. In total the airline is now operating 269 weekly flights to the US from Heathrow, up from 267 weekly flights last summer (w/c 11 April 2017 vs 12 April 2016). It has also recently introduced flights to Santiago from Heathrow, its longest non-stop service. From Gatwick BA has introduced Oakland, its only US West Coast service from its second London home, a route which anna.aero was fortunate to be on-board. In total the airline operates 31 weekly flights from Gatwick to four US destinations, up from 24 weekly flights in the same week last year. The carrier also returned to New York JFK from Gatwick at the start of W16/17, a route it had last operated in 2009. While long-haul gains have been made, BA has recently confirmed that its service from Gatwick to Lima, a route it launched on 4 May 2016, will be going from a year-round to seasonal operation, with the route not bookable between 29 October and 24 March 2018. Along with long-haul routes, several short-haul services have also been launched from Heathrow, including Nantes, Murcia and Tallinn. While these new services are great, Heathrow is slot constricted, so how has BA managed to get these slots for its new routes?

AC: “The New Orleans service has come from flying 11 flights a week to Philadelphia and this has now been cut to seven weekly flights, freeing up the slots for our four times weekly link to New Orleans. We keep on playing with the available resources that we have and we continue to do so, of course, in partnership with our American Airlines partner in the US.”

Along with advancements from the UK capital, the airline will be returning to the UK regions (excluding Heathrow connections) with European flights this summer after nearly 10 years, with Birmingham, Bristol, Manchester and Edinburgh all seeing seasonal scheduled flights to destinations in France, Spain, Italy and Greece. Flown using London City-based aircraft, the airline will be operating weekend flights from the UK regions during the summer months, similar to the operation it has been operating out of London Stansted over the past year.

aa: “BA will be beginning new flights to Manchester, Birmingham and Bristol this summer. How are these new services performing in regards to sales? Could we see more expansion from the UK regions in the near future?”

AC: “BA CityFlyer, based at London City Airport, will indeed be operating form Birmingham, Manchester, even Dublin this summer. It is the continuation of the project that we started last year from Stansted. We are very pleased with the results of that small but interesting operation from Stansted, so we are going to expand it to some other cities, but we will wait and see. It is still a very small regional operation, but we found out that there is a sufficient small number of premium travellers that have interest in going to Alicante, for example, and other places like that. So, it is a continuation of what we started last year and we will see where it takes us in the future.” 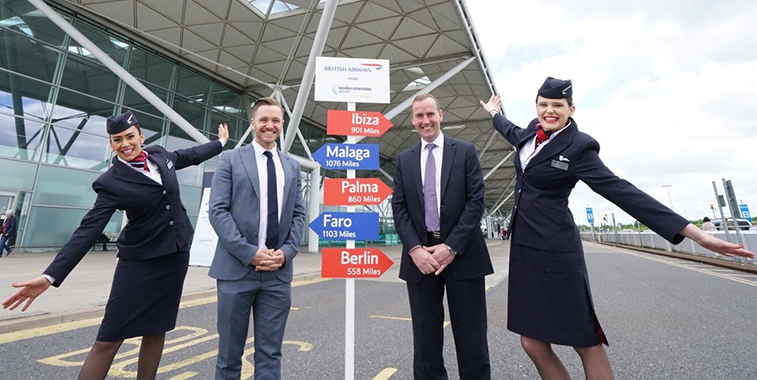 Last year British Airway commenced weekend seasonal summer services from London Stansted to five destinations. Seen at the launches last summer are Luke Hayhoe, British Airways’ GM Commercial and Customer at BA CityFlyer and Andrew Cowan, CEO, London Stansted. Due to the success of the operation, BA is rolling out the weekend services to further UK airports including Birmingham and Manchester, marking the return of European flights from these airports with BA after 10 years.