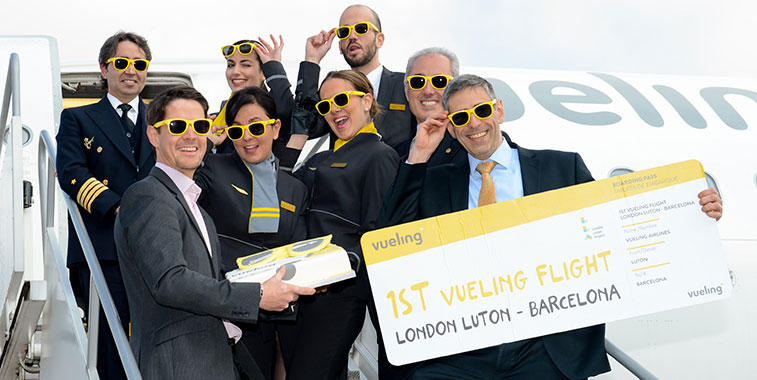 Vueling launched several routes from Barcelona to airports in the UK last summer; Leeds Bradford, Liverpool, London Luton (pictured) and Newcastle. Of these only the Luton service is operating this summer as the UK market sees a 9% reduction in Vueling flights from Barcelona in S17. This compares with a 21% cut in flights to Germany from Barcelona and a 14% increase in domestic services from the Catalan airport.

According to our analysis of Aena data, Vueling has recently carried its 100 millionth passenger through its home base of Barcelona. The Spanish LCC, which began operations on 1 July 2004, is one of a growing number of European LCCs with bases across several countries. However, Barcelona is still by far the airline’s biggest base with over four times as many flights as the airline’s second biggest base at Rome Fiumicino.

In its early days the carrier competed vigorously with clickair, another Spanish LCC which was part-owned by Iberia. However, in 2008 it was announced that the two airlines would merge. This finally happened in 2009 and the Vueling name was retained for the combined entity. Vueling is now a subsidiary of International Airlines Group (IAG) along with Iberia. 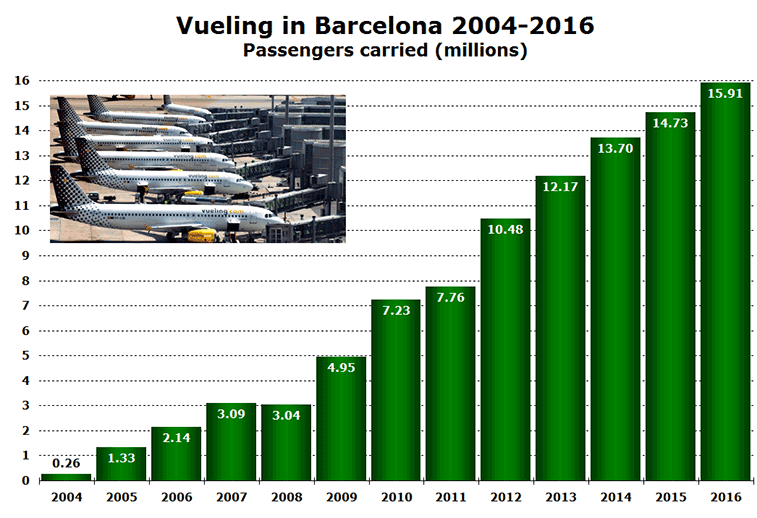 Vueling has been the biggest airline in Barcelona for all of this decade. According to Aena data, the carrier handled 36% of Barcelona’s passengers in 2016. Its nearest rival at the airport, Ryanair, accounted for just over 15% of the airport’s passenger demand. Iberia ranked only seventh last year, behind easyJet, Lufthansa, Air Europa and Norwegian.

August is peak month for Vueling in Barcelona

According to Aena data Vueling’s busiest month in Barcelona for passengers is August which has been the case in each of the last four years. The airline’s seasonality profile is fairly consistent, with passenger numbers in January and February being around half of those in the peak summer months. So far in 2017 the airline has increased demand at Barcelona by 9% in January and 6% in February, although adjusted for last year’s leap year, February growth would also be around 9%. 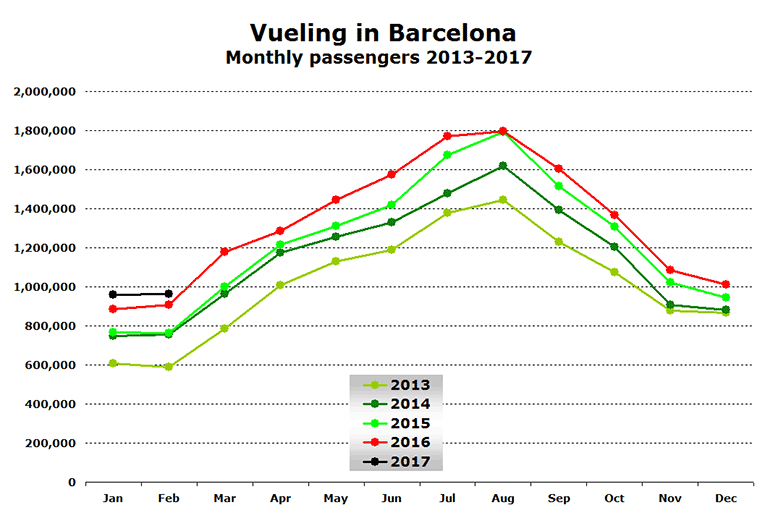 Based on currently available schedule data, Vueling is increasing the number of flights operated at Barcelona by around 5% across the whole of the summer season when compared with last summer. However, the airline has taken significant action in axing over 20 routes. After serving over 140 destinations in each of S15 and S16, this year the route count from Barcelona has fallen to just over 120. Of these Vueling competes head-to-head with Ryanair on 30 of them. 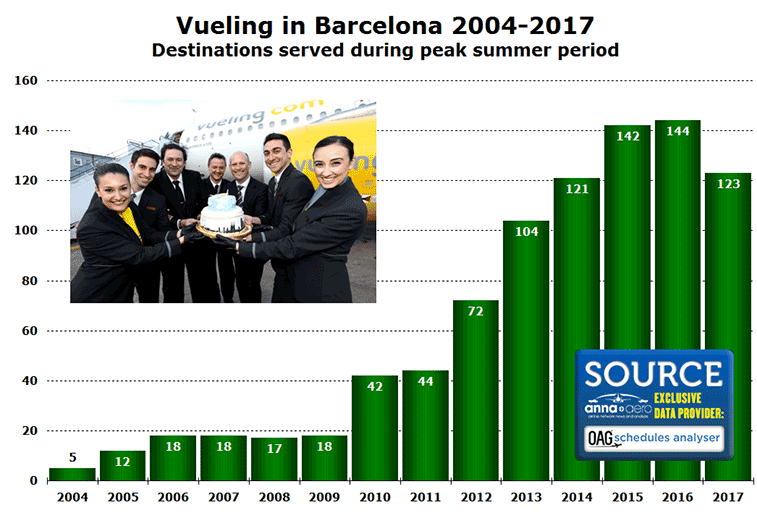 Destinations dropped since last summer include Accra, Ancona, Dresden, Frankfurt, Leeds Bradford, Leipzig, Liverpool, London Heathrow, Moscow Sheremetyevo, Newcastle, Sofia, Stavanger and Verona as well as some secondary airports in Russia. The only new route for 2017 appears to be the resumption on 10 March of a daily, domestic service to Valencia, which at just 293 kilometres is the airline’s fifth shortest sector from Barcelona after Palma de Mallorca (200 kilometres), Menorca (241), Toulouse (267) and Ibiza (274). The longest sectors are to Banjul in the Gambia (3,595 kilometres) and Dakar in Senegal (3,500 kilometres), both of which are served just weekly.

Domestic market is biggest and fastest-growing

Analysing schedule data for S17 shows that Spain is the biggest country market for Vueling’s Barcelona network. Domestic flights account for 44% of the LCC’s operations from its main hub this summer, up from just over 40% in S16. Of the airline’s top 15 country markets, it is also the fastest-growing, with domestic flights up 14% this summer, compared to a network average of less than 5%. 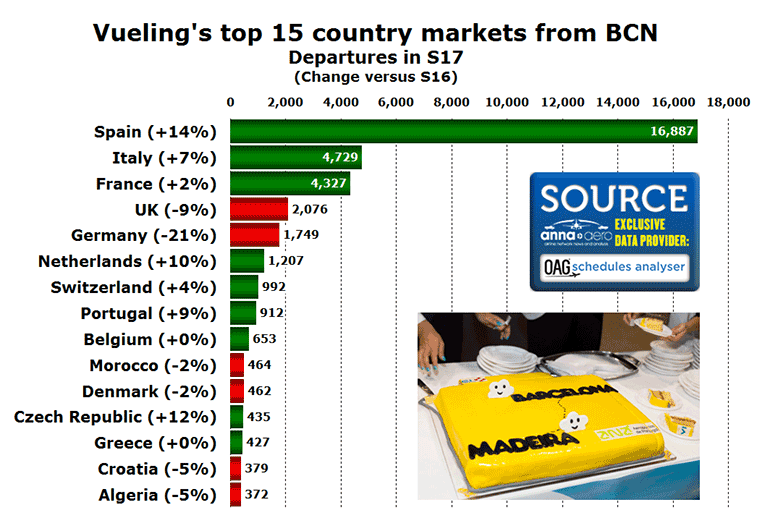 Six of the top 15 country markets (highlighted in red) show a reduction in flights this summer versus S16, notably the UK and German markets. This can be explained by the route cancellations previously noted. Apart from Spain, only the Czech Republic (Prague) and the Netherlands (Amsterdam, Eindhoven and Rotterdam) are registering double-digit growth in flights this summer. 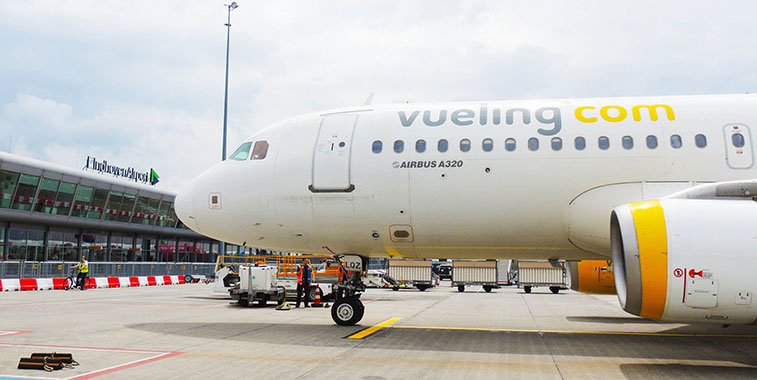 Last June Vueling launched a twice-weekly, seasonal service from Barcelona to Eindhoven in the Netherlands. This summer frequency has increased to three flights per week. Flights to the Netherlands are up 10% this summer, one of the carrier’s fastest-growing country markets.