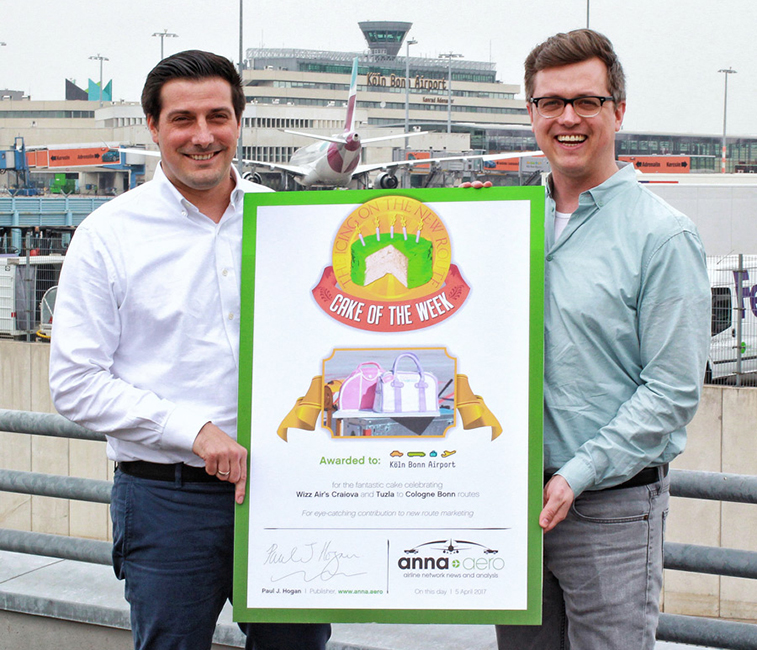 This week Cologne Bonn celebrated winning the anna.aero S17 Cake of the Week Pubic Vote – Part I. The German airport gained the most votes for the superb cake that was made to mark Wizz Air’s new routes from Craiova and Tuzla. Seen celebrating the airport’s win are: Tobias Lyssy, Director Aviation Development and Jan Moeller, Head of Business Development. You’re going to need a big wall to hang that up on fellas! 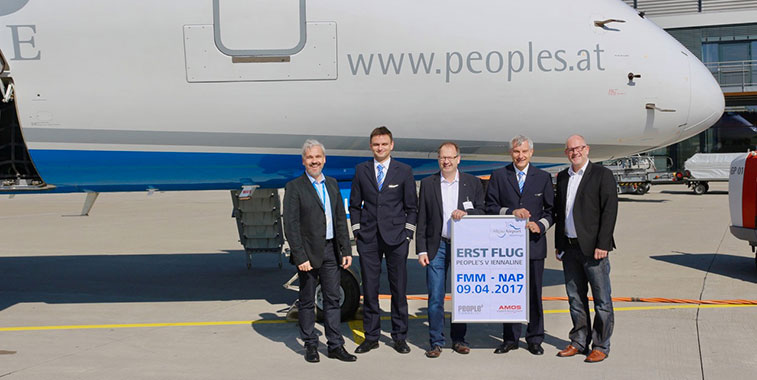 On 9 April Memmingen Airport welcomed the first flight of People’s Viennaline’s new weekly charter service to Naples operated in conjunction with Amos Reisen which has been offering the route since 2010. The route will be flown using the carrier’s 76-seat Embraer E170 until 18 June and then again between 3 September and 5 November. Celebrating on the apron are Klaus Degenhart, MD of Amos Reisen (center); Ralf Schmid, MD of Memmingen Airport (left); Daniel Steffen, CEO of People‘s Viennaline (right); as well as Captain Helmut Kristofics-Binder and First Officer Franz Leitner after the first landing. 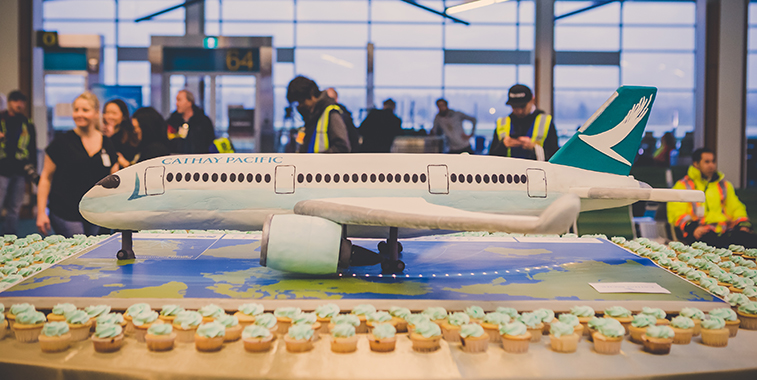 Vancouver on 28 March welcomed Cathay Pacific Airways’ inaugural A350 service with this mighty impressive cake, the first time the aircraft type has been used on a scheduled route to Canada. “I’m thrilled to not only celebrate Cathay Pacific’s increased frequency and continued success at Vancouver, but also the first Canadian arrival of the fantastic A350-900,” said Craig Richmond, President & CEO, Vancouver Airport Authority. “It is exciting to see the continued growth of this route from Hong Kong and opportunities that stem from it as Vancouver works towards building a world-class sustainable gateway between Asia and the Americas.” In total Cathay Pacific will add a further 87,360 annual seats on its route between Hong Kong and Vancouver, with the airline providing 17 weekly flights on a mixture of A350s and 777-300s.