Manchester-Mumbai is “Skyscanner Unserved Route of the Week” ‒ over 725,000 searches; Virgin’s next long-haul from Northwest UK? 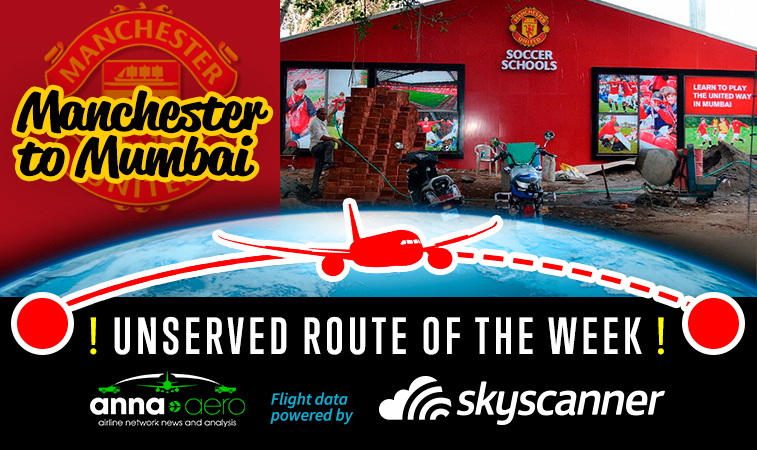 With over 725,000 searches in the last year – that’s over 60,000 searches per month! – a potential city pair from Manchester to Mumbai has been identified as this week’s “Skyscanner-anna.aero Unserved Route of Week” – a powerful analysis based on aspirational data captured from the Skyscanner.net flight comparison site used by +60 million unique visitors per month. “Manchester is Europe’s largest unserved market to/from Mumbai,” states Robert Smith, Head of Aviation Development at Manchester Airport. “In fact the airport is second only to Heathrow in terms of total O&D traffic for UK to India.” 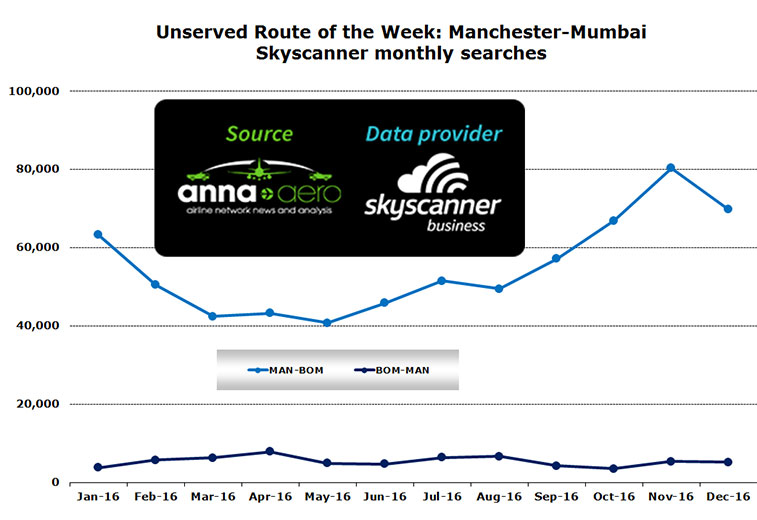 anna.aero suggests Virgin or Jet Airways jump on this route

Skyscanner demand on this week’s unserved route shows a massive bias towards the UK end of the city pair, with a 91/9 split, so on this basis we looked at potential carriers at the Manchester end first. Although no one airline dominates at the airport, most of the biggest carriers are predominantly short-haul operators, according to OAG data for the week commencing 6 April. LCCs Ryanair (16% share of weekly seats) and easyJet (13%) take the top two spots, with Flybe (10%) in third. While the fourth largest carrier at Manchester, Thomas Cook Airlines (6.9%) flies to 29 destinations from the airport, including nine which are long-haul, all of them are to the US, Africa and Caribbean. The story is the similar for Thomson Airways (fifth largest carrier), which has a long-haul network of eight destinations, and indeed one is in Asia (Puhket), but again it should be considered unlikely that the leisure carrier is going to stray into a market like Mumbai.

We have to consider the ninth biggest carrier at the airport, Virgin Atlantic Airways (2.7%), as being the most-likely to consider a Manchester-Mumbai operation at this time from the UK end. The airline currently offers six long-haul destinations from the airport – Orlando, Las Vegas, Atlanta, Barbados and the recently launched services to Boston and San Francisco. On 25 May, the airline will begin also daily flights to New York JFK from Manchester, as it replaces the existing Delta Air Lines service. Virgin Atlantic’s CCO, Shai Weiss, commented: “This summer, we’ll have 26% more seats out of the city than last year, cementing our commitment to Manchester,” so clearly the airline is in expansion mode at the airport. Indeed, Virgin Atlantic has experience in the UK-Mumbai market, operating to the Indian city up until early 2015 from London Heathrow. On this basis, a link to Mumbai would not be out of the question for the airline to consider, especially as there is potential for two-way feed onto its US routes, and now given this overwhelming Skyscanner data.

“Excluding Sydney [which cannot be reached in one sector], Mumbai is the second largest unserved market from Manchester [Bangkok being the biggest],” confirms Smith. In 2016, the market witnessed 74,000 indirect passengers, plus 73,000 surface leakage to Mumbai from Manchester’s two-hour catchment area (IATA Airport IS and CAA Survey 2016). This figure has grown by 12% since 2015.

Considering the Indian end of the route, the potential carriers at Mumbai were contemplated next. Jet Airways is the biggest airline at the airport, with 29% of weekly seats, ahead of its nearest rivals, IndiGo and Air India, with 22% and 14% respectively. The Etihad Partner, which already serves London Heathrow (double-daily), Amsterdam (daily) and Paris CDG (daily) from Mumbai, could well be in a position to consider this route. This city pair may well also be contemplated by Air India which flies from Mumbai to Heathrow in Europe as well, and is already present in the UK regions with its existing daily Delhi to Birmingham service.

When looking at the previous year of search data, the busiest month for potential traffic flows (for both directions on the route combined) is November 2016, with over 85,000 searches, over 40,000 higher than the lowest monthly figure, which was recorded in May 2016 (46,000 searches). The seasonality profile of this search data is more extreme than the last Unserved Route of the Week (Tallinn to Malaga) with the low-month traffic representing 53% of the highest month. “The route has strong year-round demand, but with a winter bias. 43% in summer, 57% in winter,” adds Smith. According to OAG Traffic Analyser, because there is no direct service, the top three connecting options chosen by those passengers who did book travel between Manchester and Mumbai in the past year indicates that the majority of connecting travellers used Abu Dhabi (30%) Dubai (29%) and Heathrow (13%). When looking at the traffic flows in the opposite direction, the top three remain unchanged, however fourth spot is taken this time by Jeddah, leaping ahead of Doha, when considering Mumbai-Manchester transit traffic.

With a lack of direct services, travellers between these two cities have clearly got used to these one-stop alternatives. However, the market demand is extremely buoyant – as the graph below shows, with nearly 12% of the Skyscanner searches for these indirect Manchester to Mumbai services converted into ticket sales – that’s more than the average 9.4% achieved for Skyscanner conversion/purchase rates for all direct routes available from either Manchester or Mumbai. However, with over 725,000 annual searches a daily wide-body service should be immediately viable for the airline selecting to start this potential city pair. “In total O&D traffic, Manchester-Mumbai ranks third behind Heathrow and Paris CDG, and way ahead of several routes that have direct services, e.g. Frankfurt, Munich, Brussels, Amsterdam, Zurich and Istanbul,” concludes Smith. 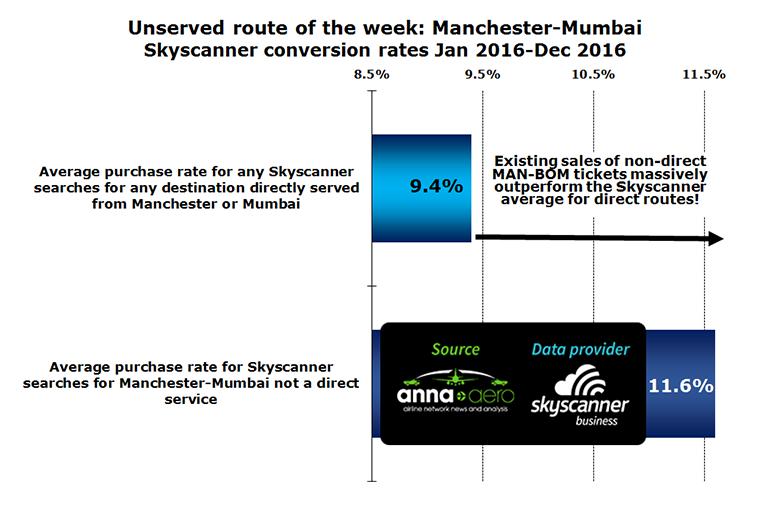