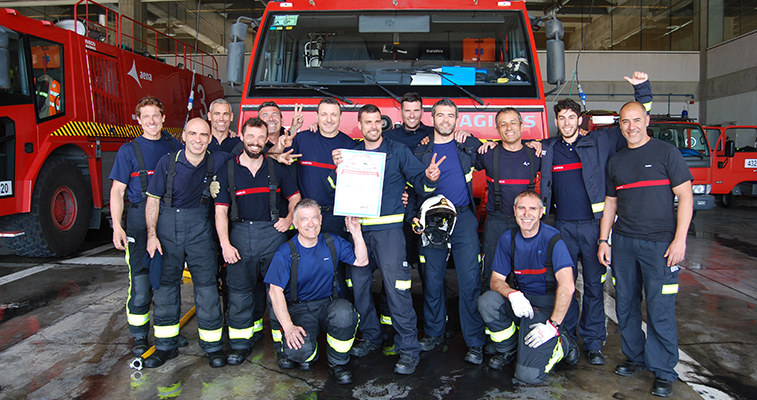 Alicante Airport this week celebrated winning the Arch of Triumph competition with the FTWA it created to greet Luxair’s new route from Luxembourg, an arch which placed it second in the overall 2017 competition. The firefighters sure look elated with the win, but what they did not know when this photo was taken was that they had already dropped a place in the overall standings after an FTWA was sent to anna.aero that just made us go WOW! But which airport has allowed this event to occur?

Last week Alicante jumped to second in the anna.aero Arch of Triumph 2017 competition by scoring a very respectable 36.2 for the FTWA that it produced to welcome the arrival of Luxair’s new service from Luxembourg, and this week the Spanish airport’s firefighters celebrated that second place finish. However just one week on from Alicante’s stellar performance and it has already dropped to third. Why? Because of the exceptional water arch that was sent to anna.aero this week from another European airport that has clinched top spot (see below). This week anna.aero received 10 FTWAs to score with them registering an average score of 28.9, a score that would be placed tenth on the current leader board. Last week when Alicante won, the 20 FTWAs that were entered generated an average score of 26.7, so it seems the standards of the world’s FTWAs are improving as we go deeper into the S17 season. But the question is, can an airport create a worthy FTWA to beat the winner this week? Keep monitoring!! 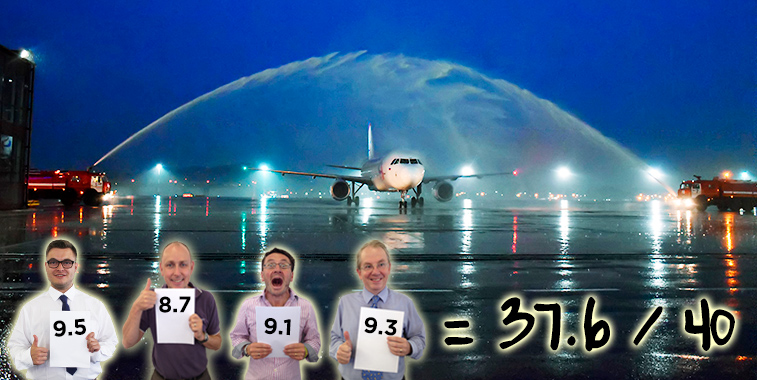 An FTWA modelled on the Fisht Olympic Stadium…

Judges’ comments: This splendid FTWA which has climbed to #1 in the 2017 Arch of Triumph competition is modelled on the arch of the Fisht Olympic Stadium that was used during the opening and closing ceremony of the 2014 Winter Olympics. Fisht Olympic Stadium was designed by Populous and British design consultancy BuroHappold Engineering. The stadium’s roof was built from approximately 36,500 square metres of ethylene tetrafluoroethylene (ETFE) and was designed to give the roof the appearance of snowy peaks with a smooth arch, and that is exactly what Sochi/Adler’s firefighters have created in this arch to salute Ural Airlines’ new route to Tel Aviv. The stadium is currently undergoing a conversion into an open-air football stadium in preparation for the 2017 FIFA Confederations Cup and 2018 FIFA World Cup when it will be called Fisht Stadium. Let’s hope that Sochi/Adler’s next FTWA does not have any open air when they are required next after this leading entry. 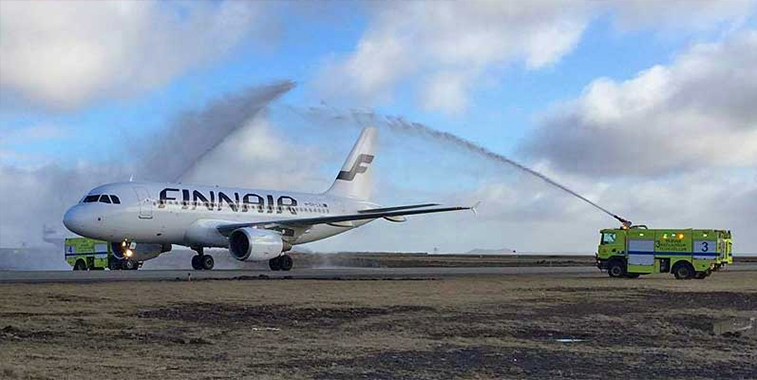 Not the finest of FTWA finishes for Finnair.

Judges’ comments:  While FTWAs are not so common from Reykjavik/Keflavik due to the weather (average year-round temperate high of only 7.0°C), it does bring out the tenders when the summer season comes around, and it most certainly does when welcoming a new flag carrier. Tenders #3 and #4 (#1 and #2 on an early summer vacation?) have greeted Finnair with an okay FTWA, but due to seasonal weather it will need a few more summer launches at this rate to be able to produce a winning water arch. Keep up the practice Reykjavik/Keflavik. 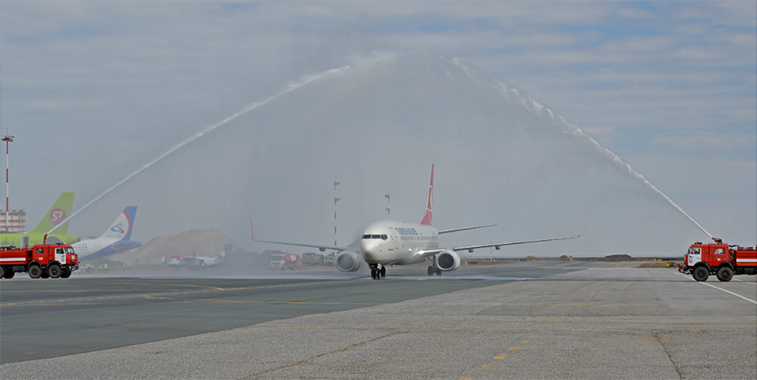 Judges’ comments: Samara in Russia is the tenth destination in the nation that Turkish Airlines serves, and the FTWA that greeted the new service is exactly what anna.aero’s judges look for in an arch (both tenders on show, arch symmetry, water curtain, airline details etc). While 32.9 is a very respectable score, and enough to place it in the top 10 leaderboard, a fellow Russian airport just pipped Samara to the title this week. 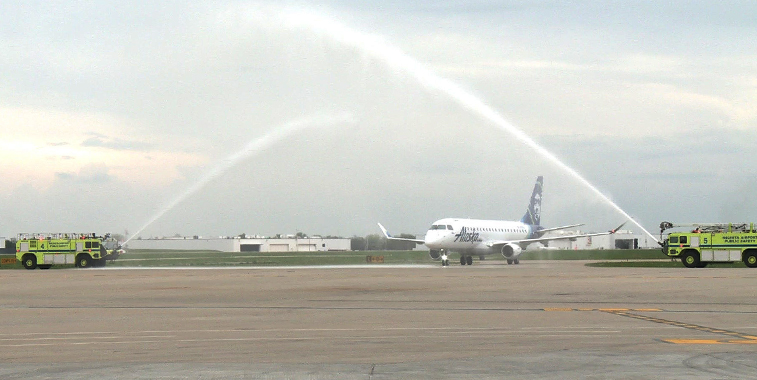 Wichita has a wacky tender…

Judges’ comments: On the left we have tender #4, and it has clearly perfected the right angle to greet an inaugural flight conducted by a E175…along with a smooth jet helped by the perfect nozzle setting. Tender #5 however was clearly expecting an A380 with the height it has on its half of the arch. The result? The makings of a big boy little boy in Wichita. Next time Wichita…next time… 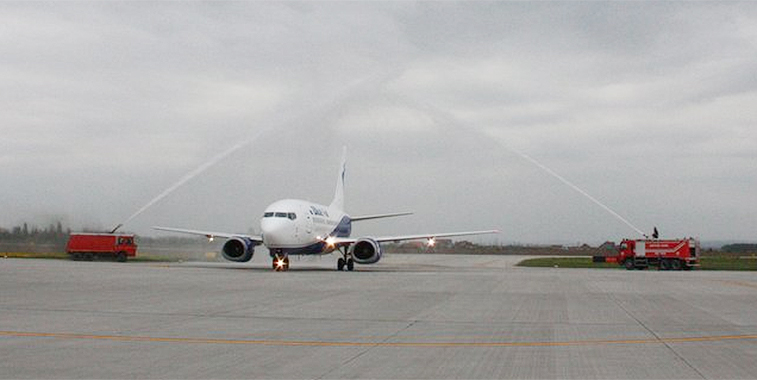 A fine performance in Oradea…but no curtain call required…

Judges’ comments: Oradea has certainly delivered here to welcome Blue Air’s first international route to the airport. It’s smooth, the angle is spot on and there is no apron clutter. This has allowed the airport to achieve a respectable score of 29.5. While in relation to the arts this would be a performance worthy of an Academy Award nomination, the lack of a curtain on the arch means it remains as just that…a nomination. Here’s hoping for a win for Oradea’s next performance, potentially Blue Air’s route launch to Constanta in June? 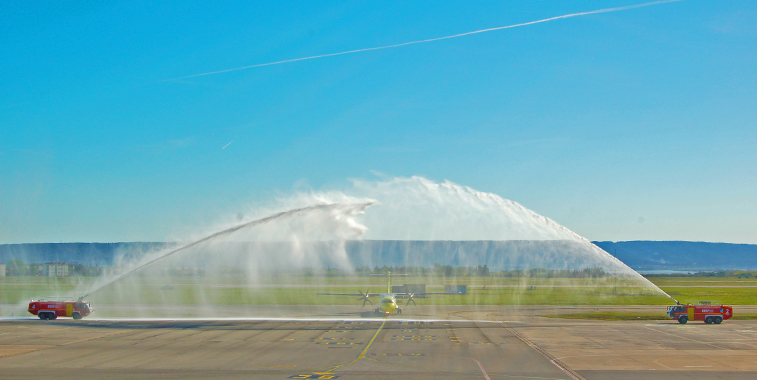 “Water salutes are always a challenge in our windy region.”

Judges’ comments: When anna.aero received this FTWA from Marseille a comment also came with it. “Water salutes are always a challenge in our windy region,” said Laurent Dubosc, Networking Development Business Manager, Marseille Airport. Indeed the French South Coast airport does see windy conditions, and with that it has produced a well thought out battle against mother nature to produce this FTWA. The passengers can take better photos than the airport photographer…

Judges’ comments: As stated on numerous occasions, it is sometimes the fault of the airport photographer that results in an FTWA not achieving the score it deserves, and that is again the case in Lviv. While the snapper of the exterior shot has only managed to get the right-side of the arch, it has completely left out the tender on the left. Luckily a passenger on the inaugural flight managed to snap an interior shot that shows the arch in all of its glory… 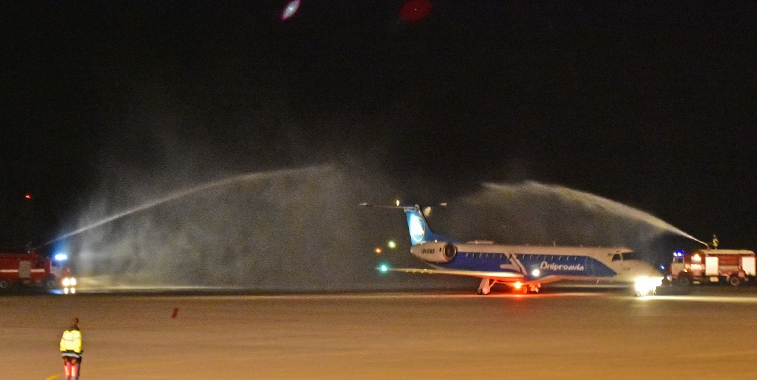 An FTWA so flat Larisa Latynina could mistake it for a balance beam!

Judges’ comments: Larisa Latynina holds the record for the most Olympic gold medals by a gymnast, male or female, with nine in total. Her total of 18 Olympic medals was a record for 48 years until Michael Phelps overtook it in 2012. Originally from Kherson, Latynina could easily mistake this FTWA from the airport for a balance beam, it is that flat. Maybe she may give it one last go as the balance beam was one event where Latynina did not win gold…either way Kherson has certainly not won the FTWA gold medal for this effort to welcome its sole link from the Ukrainian capital. 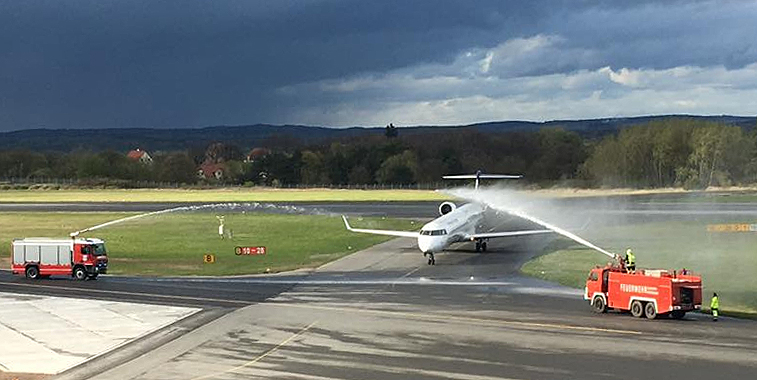 This FTWA from USEdom is USEless…

Judges’ comments: Usedom is a Baltic Sea island in Pomerania. Since 1945 it has been split between Germany and Poland. It is the second biggest Pomeranian island after Rügen and before neighbouring Wolin. Nicknamed Sunny Island, with an annual average of 1,906 sunshine hours a year, Usedom is the sunniest region of both Germany and Poland, and it is also the sunniest island in the Baltic Sea (although the weather on 15 April says otherwise). This makes it a useful gateway for both Germans and Poles to escape to for some home-grown sunshine. However, Lufthansa’s new route to Heringsdorf is anything but useful in regards to helping market the new service. We will let the anna.aero’s judges’ scores speak for themselves on this one… 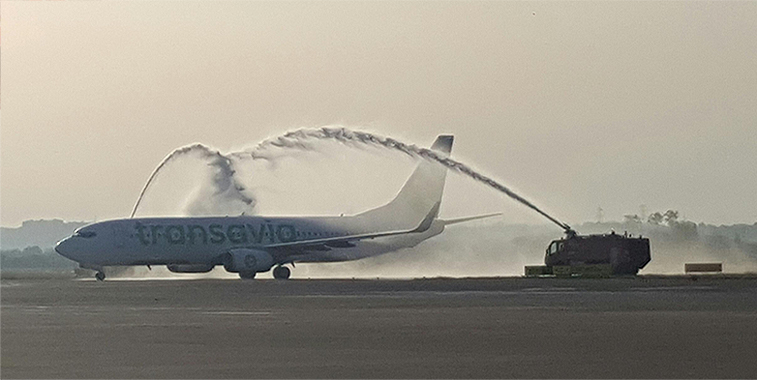 Judges’ comments: “If the water was yellow this would look a bit like a McDonald’s advert,” commented one of anna.aero’s judges when they scored this FTWA from Reus which greeted Transavia’s new connection from Amsterdam. If only the route had been started by Ryanair or Vueling…then Reus’ firefighters may have gone for the yellow dye. Either way, anna.aero’s judges are lovin’ it!

Judges’ comments: Although anna.aero’s judges do not have the greatest eyesight in the world (three wear glasses and one is red/green colourblind), it clearly looks like the tender on the left of the image is much bigger than the one on the right. What that means is more pump power, and that has resulted in an arch that just doesn’t cut the mustard when it comes to getting that perfect arch symmetry.