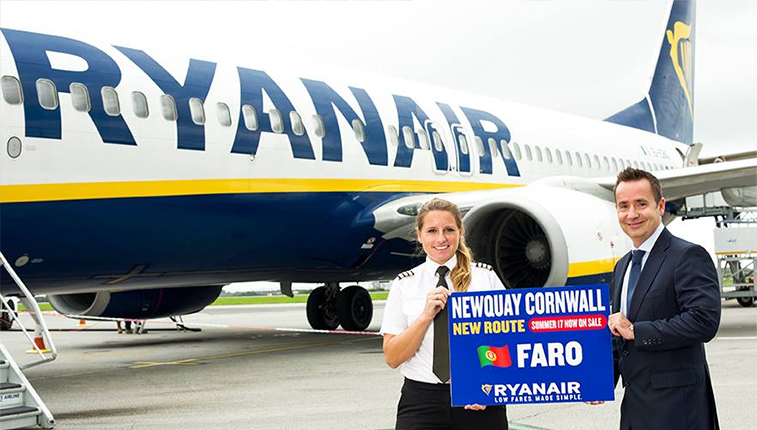 In 2016 Cornwall Airport Newquay was recognised as the UK’s fastest-growing airport, with it recording a 48% increase in passenger traffic versus 2015. For the first two months of 2017 the airport’s traffic is up 37%, meaning that it is certainly on its way to achieve the title of the UK’s fastest-growing airport this year also. One factor which may help the airport achieve that feat is the launch of Ryanair’s new route to Faro. Launched in March, it is hoped that the airline will carry 20,000 passengers on the route between the UK and Portugal this year, which means Ryanair is aiming for an average load factor of 85%.

Last year Cornwall Airport Newquay (CAN) was named as the fastest-growing airport in the UK above 100,000 passengers, with it welcoming a majestic 48% increase in passengers. In total, 2016 witnessed over 370,000 passengers pass through CAN’s terminal, up from 250,000 in 2015. What is also mightily impressive is that since 2013, traffic from the airport has doubled, with passenger numbers up 112% when compared to three years ago. It clearly seems then that CAN is on a roll.

The airport sits just 7.4 kilometres northeast of Newquay in the southwest corner of the UK. The town has a population of just over 20,000, but that can increase to more than 100,000 in the summer due to Newquay’s large stock of holiday accommodation.

Traffic up 37% so far this year

In January and February this year CAN welcomed just under 36,000 passengers, up 37% on the same two-month period of 2016. To put into perspective the impressiveness of CAN’s growth, in 2013 it took until April for the airport to welcome its 36,000th passenger of the year. By the end of 2017, the airport is predicting to have seen 435,000 passengers, which would mean that traffic is expected to grow by around 15% this year. With average growth so far for the airport in 2017 of 37%, CAN is certainly on its way to meeting its 2017 growth target. 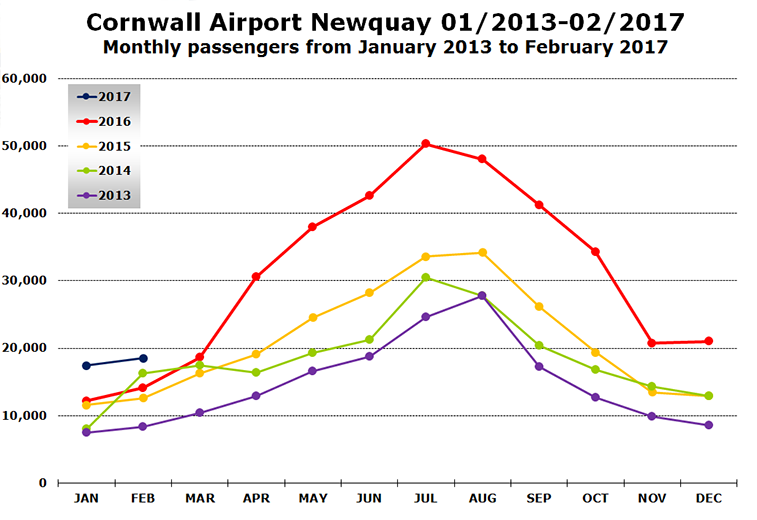 For the first two months of this year, traffic from CAN grew by 44% in January and 31% in February respectively. When we analyse this growth against the same two months in 2016 then we see how fast the airport is expanding, with January and February 2016 registering traffic growth of 4.8% and 12%. However, from that point last year the figures grew mightily. March 2016 saw a 14% rise in passenger throughput, but in April it was 60%, with the average monthly growth figure between April and December 2016 being 56%.

Is the growth sustainable?

When we take 2014’s monthly passenger statistics and place them in anna.aero’s Seasonal Variation in Demand calculator (SVID), the airport registered a score that year of 12.14 – a “Poor” rating. In 2015 the score rose to 16.59, also poor. Last year CAN registered 20.45 – a “Managerial and operational challenges” rating. So while traffic growth is fantastic for the airport, it is clear that with the peaks of growth coming in the summer months, the seasonality of CAN has worsened.

Flybe currently dominant at CAN

Looking at the five carriers that serve CAN in 2017, Flybe leads the way with Europe’s leading regional carrier operating 75% of all seats that are on offer from the airport this year. It is followed by Ryanair which places second with 11%, with the remaining carriers being Aer Lingus (7.6% of annual seats), Isles of Scilly Skybus (5.5%) and Eurowings (0.9%) with its weekly, summer seasonal route from Düsseldorf.

Last year 17% of traffic from CAN flew on international services (all highlighted in light green below), up from the 4.3% share the market had in 2015. New international routes to the airport last year included Alicante and Frankfurt Hahn, marking the return of Ryanair to the airport. Looking at UK CAA statistics for last year, and cross checking them with OAG schedules data, Ryanair’s average load factor on Alicante was an estimated 88% and 74% on its route to Frankfurt Hahn. It should be noted that this does not take into account any flights that may have been cancelled. Impressively both Ryanair routes have made it into the top 12 routes from CAN last year, with Alicante placing sixth behind London Stansted, and Frankfurt Hahn eighth, ahead of Doncaster Sheffield which was also a new route to CAN in 2016 with Flybe. Looking at the remaining two international routes from CAN – Dublin (Aer Lingus) and Düsseldorf (Eurowings) – both registered growth last year, with the Irish capital seeing a 162% increase in traffic and Düsseldorf 40%. 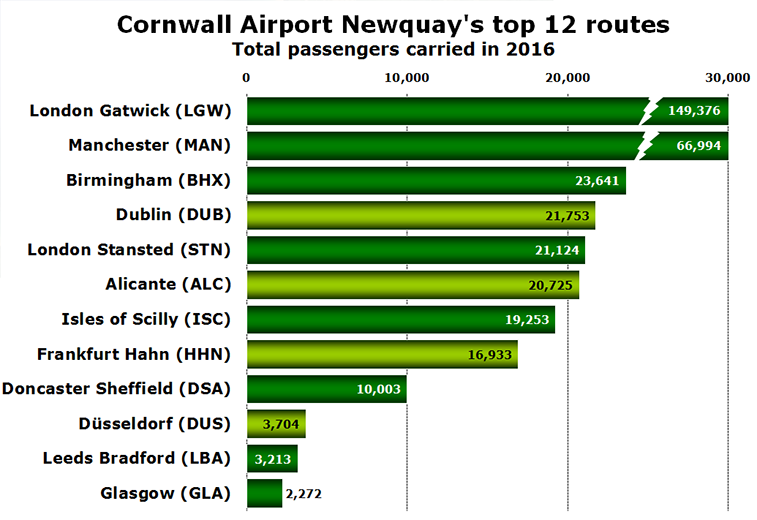 A few weeks ago a new destination joined CAN’s route map – Faro. Launched by Ryanair, the airline is expected to carry up to 57,000 passengers across its three routes to CAN this year. With the airline last year carrying over 37,600 passengers from CAN, that means that the ULCC is expecting to bring in an extra 20,000 passengers on its route to Faro, which would mean achieving an average load factor of around 85%. This is a realistic aim as the carrier has already established an average load factor of 88% on its route to Alicante, a very similar market to Faro for CAN passengers. “Sun destinations are in high demand from the southwest, so it’s fantastic having a direct link to such a popular leisure resort,” Al Titterington, Managing Director, Cornwall Airport Newquay commented on the new Faro connection.“Our next commitment in expanding CAN’s destination map is to be able to offer a warm winter break to our passengers. At this time we have no capacity for winter sun, but the demand is crying out for it.” Along with Faro, a new route to Cork will be launched by Aer Lingus in May.

Despite this enhanced connectivity with Ryanair, the number one priority for Titterington is to get access to a mainland European hub. Speaking to anna.aero ahead of Routes Europe in Belfast later this week, Titterington said: “The UK Government has recently shown support of regional access, specifically mentioning CAN, so there could be some exciting progress with London Heathrow, while Amsterdam, Frankfurt or Munich are also vital links for the next step of our development. I have some key meetings lined up in Belfast and I’ll be chatting hubs with a number of carriers.”

Along with gaining that all important hub connection and summer sun routes, the airport is also hoping to see growth in other sectors. “As well as the launch of our new routes to Faro and Cork, we’ll have other factors contributing to our continued strong growth for 2017 as Flybe increases frequencies on its Birmingham, Glasgow and Edinburgh routes and doubles capacity on its Manchester service.” Heading to Routes Europe, Titterington will have his desired route list to hand which, after the top spot going to a European hub, includes: Tenerife South, Malaga, Palma de Mallorca, Stuttgart and Hamburg. “We’ve already added a new country market this year (Portugal), and we’re looking at expanding our Irish and German markets, while in the background we’re also talking to a potential new carrier. We could see some exciting new opportunities in 2017.” 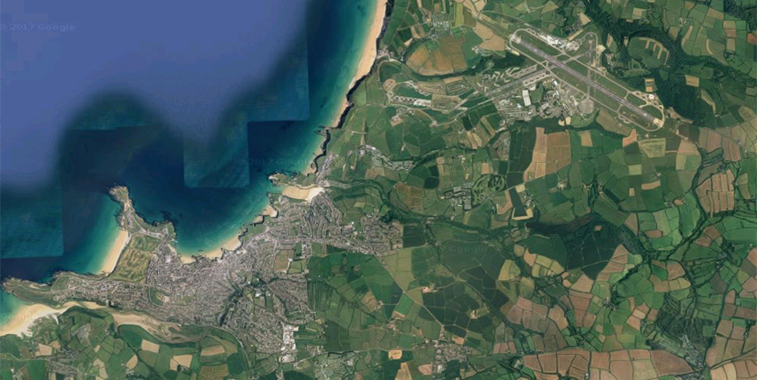 Cornwall Airport Newquay sits just 7.4 kilometres northeast of Newquay on Cornwall’s north coast. It has a population of just over 20,000, but that can increase to over 100,000 in the summer because Newquay has a large stock of holiday accommodation.